A young couple with a toddler and a new baby on the way learned they both had cancer at the same time.

Samantha Boatman, 32, was thrilled at the news of her second pregnancy but when she started having severe stomach cramps and passing blood, she knew something was wrong.

The mother from Washington, Tyne and Wear, declined to have a colonoscopy out of fear it could hurt her unborn baby, but after little Esme was born in November 2016, she was diagnosed with stage 3 bowel cancer.

At the same time, husband Martin, 34, was suffering from severe headaches that would make him vomit and he struggled to walk. Tests revealed he had cancer in his lung, liver, brain and bones, and had seventeen tumours in total.

‘We still can’t believe how unlucky we are,’ she said. ‘But the whole experience has also made us realise just how lucky we are too.’

Samantha Boatman, 32, and her husband Martin, 34, were both diagnosed with cancer – but his is terminal. The couple pictured with their two children Michael, four, and Esme, one 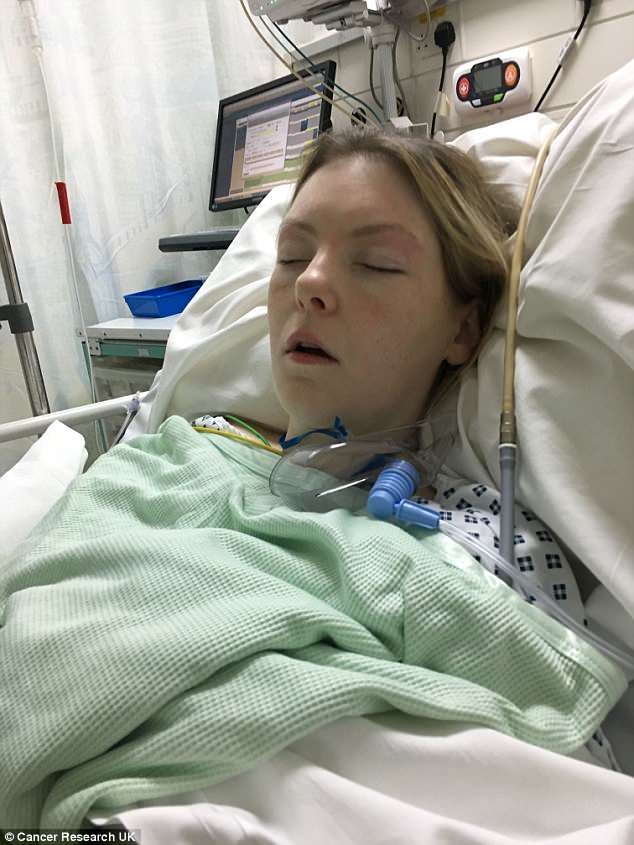 Doctors feared Martin wouldn’t survive long enough to see his daughter born and despite drugs shrinking his brain tumours and his lung cancer under control, experts aren’t sure how long he has left.

Samantha said: ‘He might have five good years or it might all go downhill tomorrow. We try not to live in a constant state of dread.

‘Even though our situation is bleak, we’re grateful for every day we have left together. When one of us has a wobble, the other is strong.

‘We make light of the situation, cracking jokes about who’s got it worse. Humour is our way through these muddy waters.’ 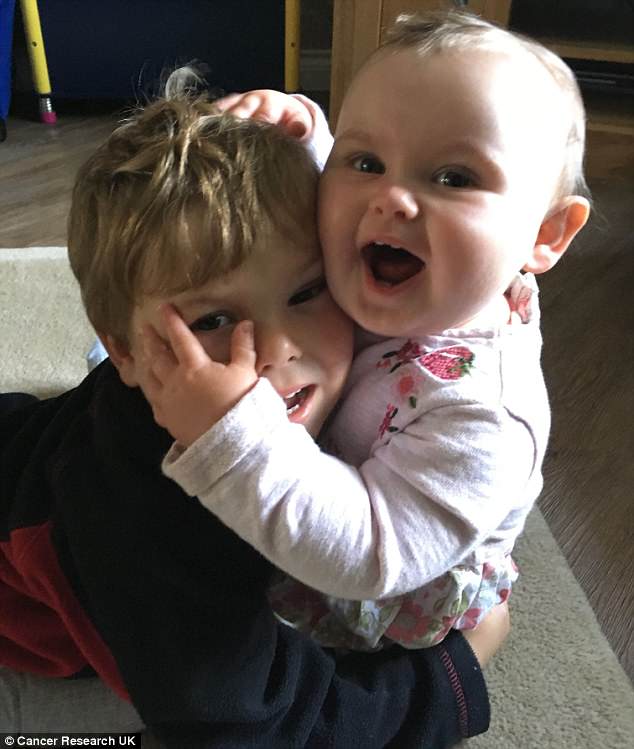 They are proud parents to Michael, four, and Esme, one, and Martin has expressed his sadness that he won’t see them grow up 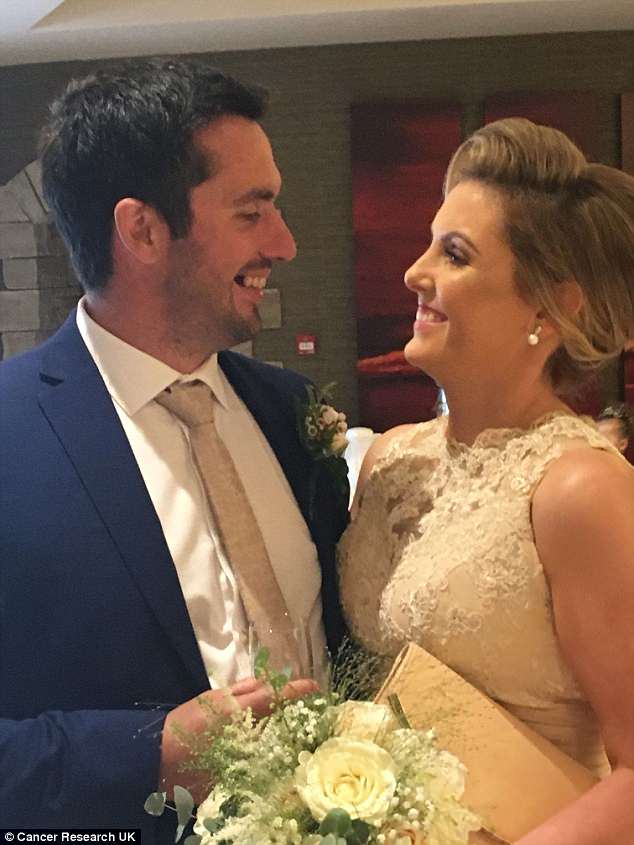 The couple met at university and have enjoyed an active lifestyle, taking son Michael away on camping trips at weekends

WHAT ARE THE SYMPTOMS OF BOWEL CANCER?

Symptoms of bowel cancer generally include:

Sam and Martin met at university in 2008, both training to become teachers.

They shared a love of the great outdoors, buying an old camper van so they could take their son, Michael, now four, camping in the Lake District at weekends.

Even in torrential rain the family were happy, curled up in the campervan playing board games.

They loved sailing and in 2016, Martin was honoured with an award for performance development coach of the year for his work with Laser skippers.

He sailed for Team GB as a child and as an adult, was training for the Great North Run and loved rugby, cycling and golf.

‘Martin was the healthiest man I knew. He’d never smoked, rarely drank. It is unfathomable that he developed lung cancer when he was so fit,’ Sam said.

Samantha experienced intense cramping during her second pregnancy, which she said would be so sudden they’d take her breath away. 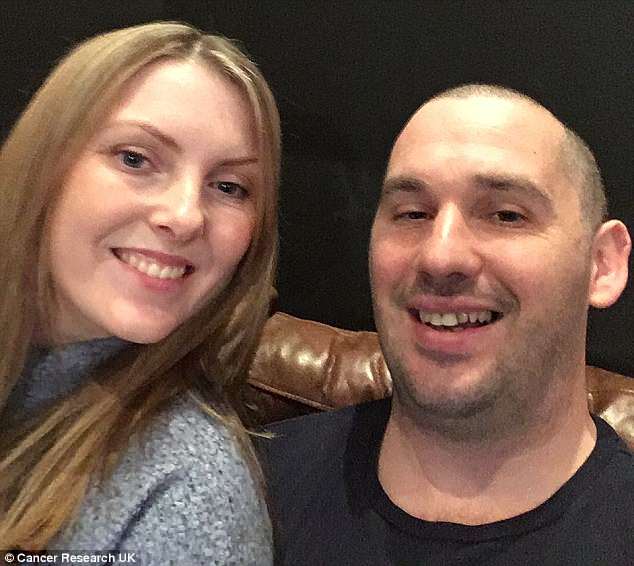 Martin began experiencing headaches and nausea, and was found to have seventeen tumours in total 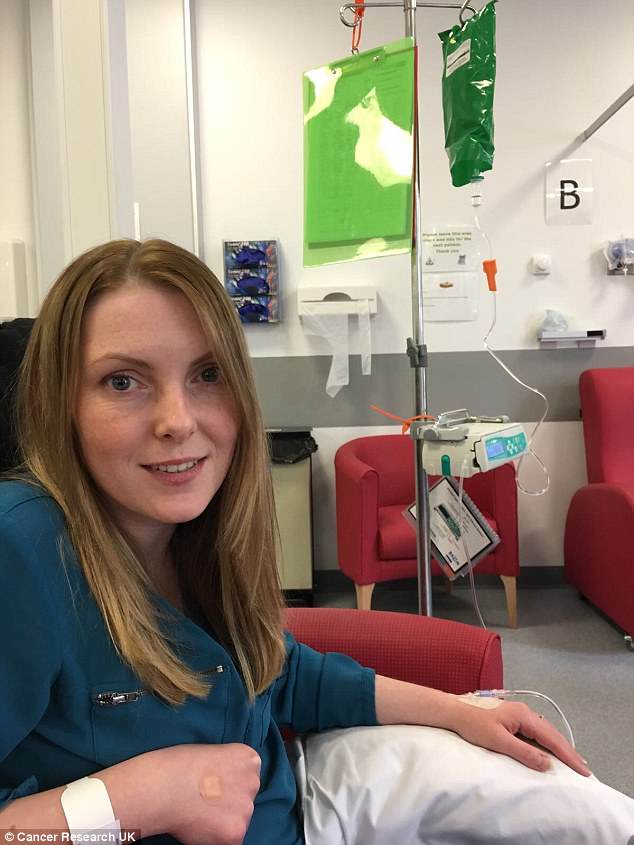 A specialist suspected that the way the baby was lying was impacting her bowel. A colonoscopy carried a slight risk to the pregnancy so Sam declined.

She said: ‘I could muster through until the baby was born and the specialist said there was only a 1 per cent chance of cancer. But by 28 weeks gestation the pain had become excruciating. An ultrasound showed my liver and kidneys were fine, but the baby was hiding my bowel.’

At that point, Sam had to put concerns about her own health to one side. Martin was experiencing changes to his vision and was seen by a consultant at Sheffield Hospital. Tests revealed a growth behind his eyes.

Martin said: ‘When they put the camera down my throat to look for the tumour a floating sponge, the shape of a ball, loomed into view and I knew that was it.’ 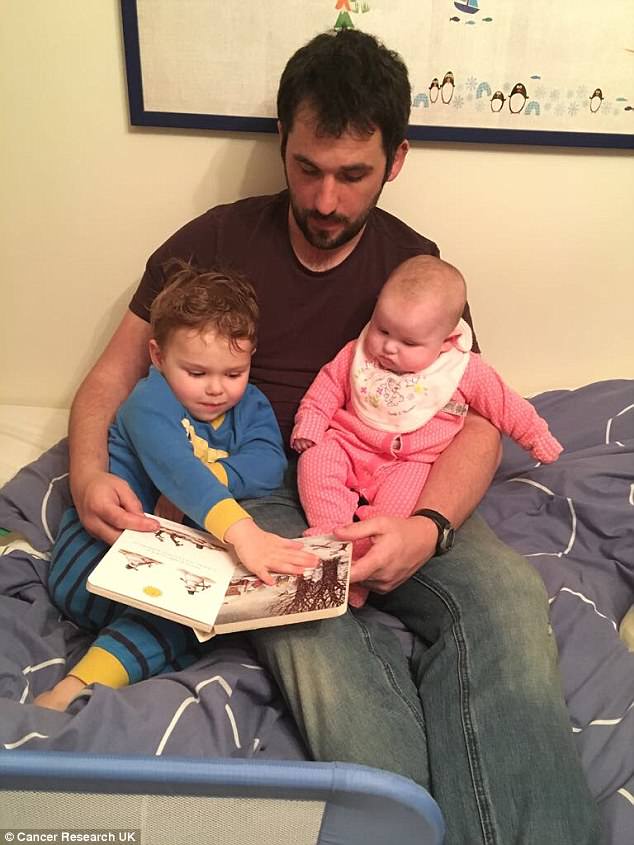 Martin – pictured with his two children Michael, four, and Esme, one – has started to record bedtime stories for the children as he won’t be around to read to them 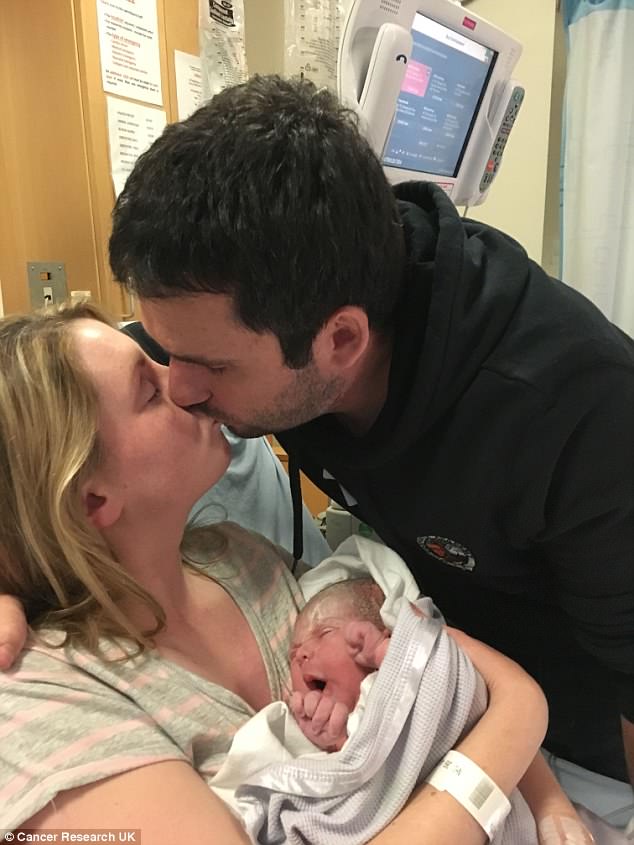 Samantha, pictured with her husband Martin after the birth of their second child Esme, is doing well after surgery last February and six months of chemotherapy 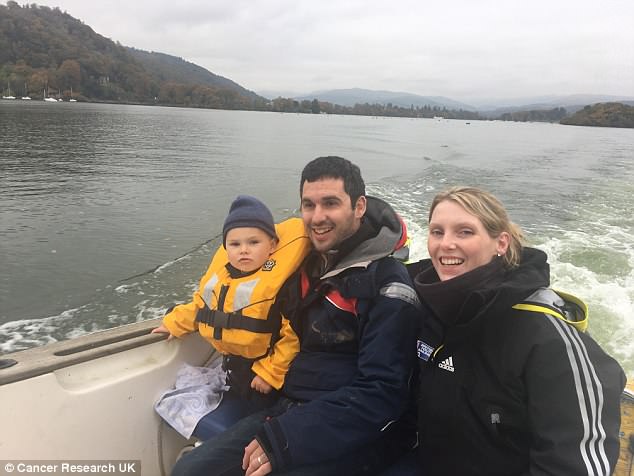 Martin knew he had cancer when he saw a tumour the shape of a ball in his throat when doctors ran tests. The couple pictured with their son Michael

The father had seven brain tumours, cancer in his lung, liver and bones, and was told he might have just seven weeks to live.

After giving birth to Esme, Samantha went for a colonsopy, which she had delayed, and she was dignosed with cancer as well.

She said: ‘Martin was beside himself. The only thing keeping him going was the thought that if he died I’d still be here for our kids. I knew I had to fight for my life.

‘I clung to the fact that on my notes my oncologist had written: ”Curable”.’ 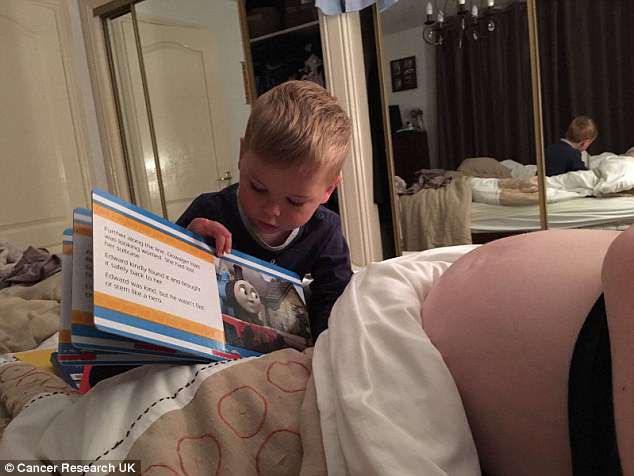 During scans baby Esme was blocking her bowel so doctors didn’t spot the tumour she had. Pictured, Sam with Michael while she was pregnant with Esme 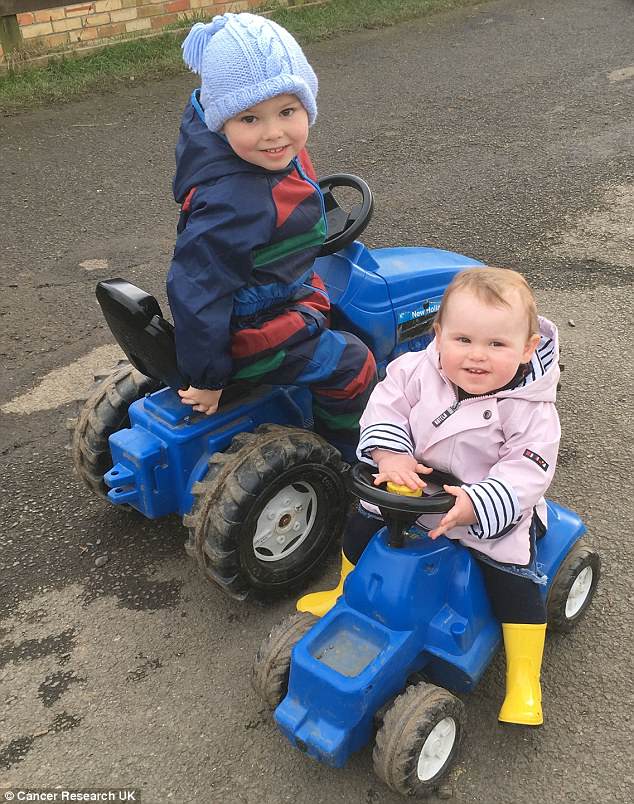 Martin was devastated as he was relying on his wife to be the one to be around and raise their children – Michael, four, and Esme, one 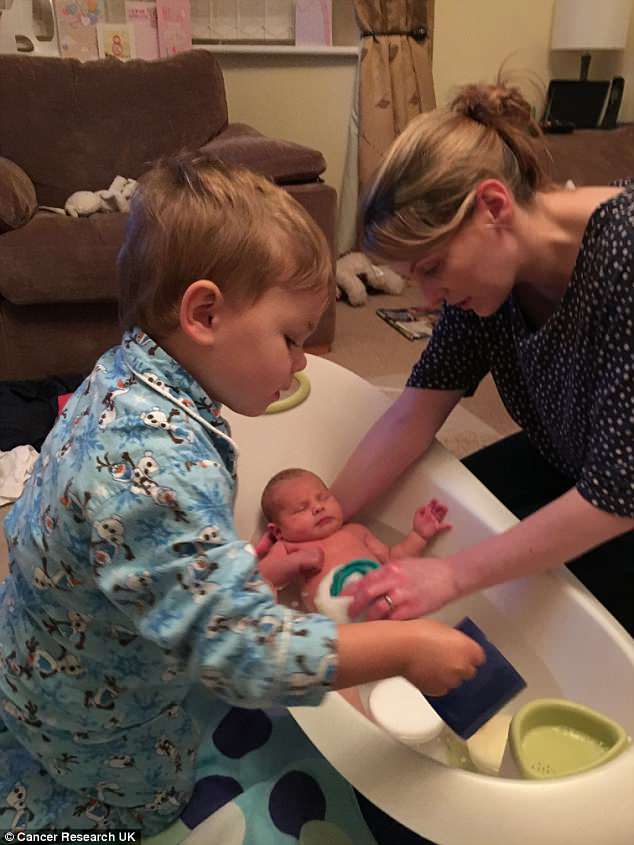 The mother-of-two is doing well after surgery last February and six months of chemotherapy because the cancer had spread to her lymph nodes.

Martin has recorded himself reading bedtime stories for his children, in case he never had the chance to read to Esme in person. He had photos printed and framed.

He sorted his will, bravely joking that he needed to ‘get his ducks in line’.

At first, Martin’s situation seemed hopeless, but then he was thrown a lifeline.

His cancer had a rare mutation which meant there was one drug which could give him a few years. This mutation meant his cells had receptors that inhibitor drugs could target. 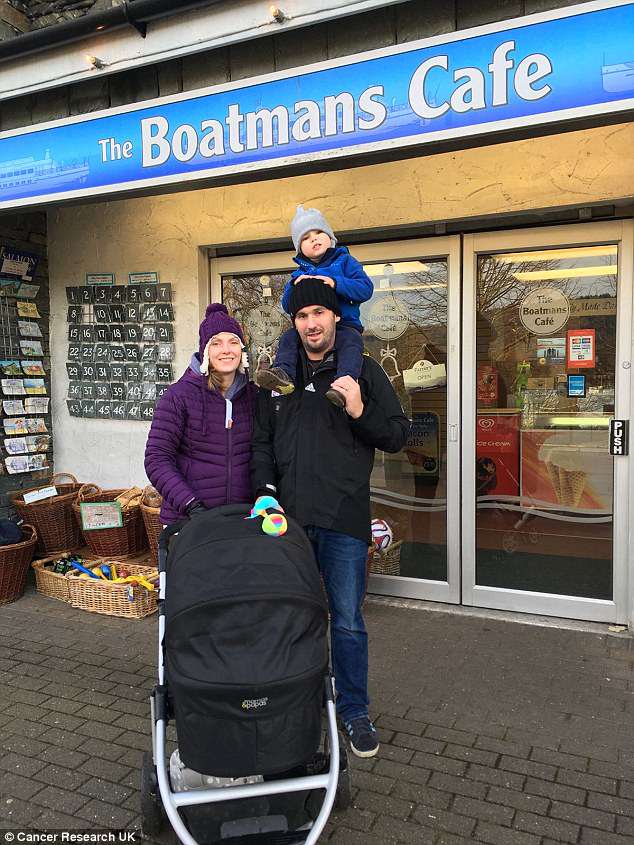 The family don’t know how long Martin has left, he could have years or his health could deteriorate in just days 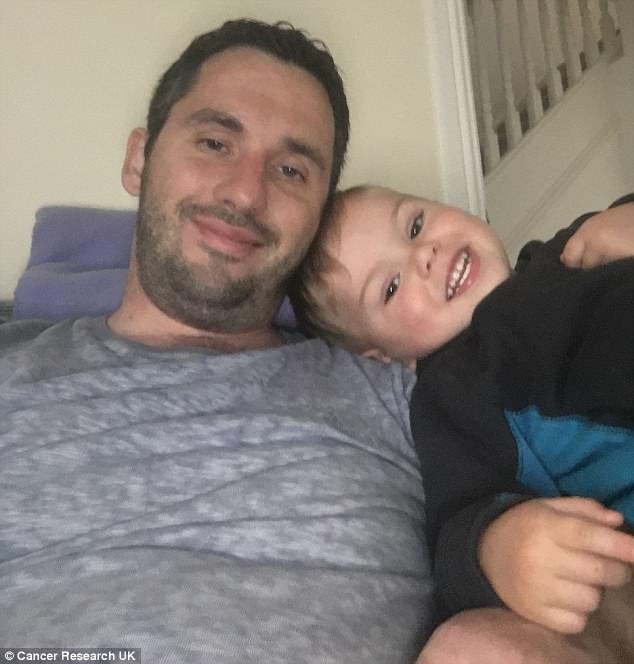 ‘We still can’t believe how unlucky we are’: The family are shocked that they both have cancer at the same time 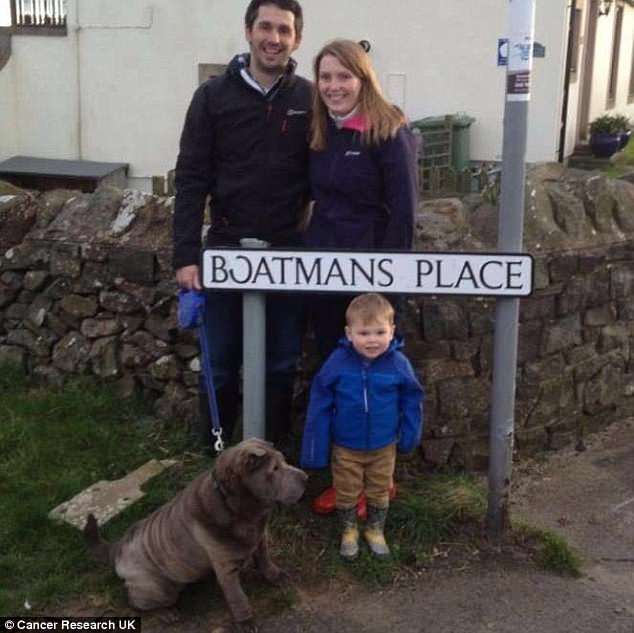 Sam said: ‘One day his cancer will find a way to outsmart the drugs. He might have five good years, it might all go downhill tomorrow. We try not to live in a constant state of dread.’

‘We realise now how many lives cancer research can save. Martin will run out of time when he catches up with the advances in cancer treatment.’