By Kamal Sultan For The Daily Mail

It’s not often you get news to make your year while finishing the ironing on a quiet Saturday morning.

And Elizabeth Glanfield, from Elland, West Yorkshire, couldn’t believe it when she was told she had won the first £10,000 prize in the Daily Mail’s £50,000 Great Summer Treasure Hunt.

‘I had just finished ironing and I initially thought it was a joke,’ said Mrs Glanfield, 80.

Celebration: David and Elizabeth Glanfield with Saturday’s Mail. The Daily Mail’s Great Summer Treasure Hunt is now in its second of four weeks

She then came around to the fact she was £10,000 better off, adding: ‘What a wonderful start to the day!’

Mrs Glanfield solved the six riddles relating to tourist attractions in last week’s papers and was one of thousands of readers who entered with the final answer, which was Horatio Nelson.

She and her husband, David, have been Mail readers for over 60 years and regularly take part in our competitions and quizzes.

But this is one of the few prizes Mrs Glanfield has ever claimed, having previously won ten shillings at a village fair in 1954.

The couple plan to spend their winnings on their son, daughter and seven grandchildren.

‘My daughter is getting a new porch at the back of the house and this will go towards it. That will be very nice,’ Mrs Glanfield said. ‘We are very family orientated.’

Speaking about the windfall, Mr Glanfield, 84, who will help to build his daughter’s new porch, added: ‘It is a boost, it’s nice because the news has been so bad since coronavirus started.

‘Everything is doom and gloom — this is a little bit of brightness over the horizon that helps.’ 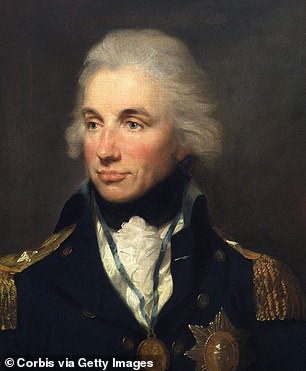 Mrs Glanfield solved the six riddles relating to tourist attractions in last week’s papers and was one of thousands of readers who entered with the final answer, which was Horatio Nelson (above)

After launching last week, the Daily Mail’s Great Summer Treasure Hunt is now in its second of four weeks.

Every week, we’ll take you on a tour of Britain from the comfort of your own home. All you have to do is solve the series of themed clues or riddles that will appear in each day’s Daily Mail — this week’s theme is stately homes and country houses.

Each weekly Treasure Hunt begins with an illustration in Saturday’s Daily Mail. Hidden within the picture are a number of letters that form an anagram, from which you can unscramble your first clue.