Couples have shared their self-isolation horror stories, as they’ve been forced to work together from home in a bid to slow the coronavirus pandemic.

COVID-19 is currently wreaking havoc on social, political, economic, health and personal systems, but some are trying to see the funny side of global quarantine.

Variety’s senior social media editor Meg Zukin started a thread on Twitter asking couples to share their stories, and she was swiftly inundated with responses – which she later complied into a Google document and made easy to view via The Social Distance Project.

So how are people around the world dealing with social isolation?

Couples have shared their self-isolation horror stories, as they’ve been forced to work together from home in a bid to slow the coronavirus pandemic (stock image)

Many of the couples forced into working in close proximity touched on the idea of divorcing their partner.

‘I told my husband of almost five years I wanted to get divorced on his birthday a week ago,’ one woman wrote.

‘My work is going on 10 day rotations to limit interactions. I’m on the first rotation and then home with him for 20 days. It’s… something.’

Even those who weren’t seeking a divorce admitted to fighting with their other halves.

‘On Thursday evening, my husband and I got into a fight and he stopped speaking to me, so we barely talked that whole night,’ one woman posted.

‘On Friday, we both found out we would be working from home starting Monday – him for the next two weeks, and me indefinitely.

She said that ‘now it’s Monday morning’ and her husband has set up his computer ‘RIGHT ACROSS’ from her at their dinning table.

‘He didn’t test out his VPN, so he’s calling his office’s tech person to get help, being very loud on the phone, sighing loudly in frustration while I’m trying to compose emails and get my work done.’

The woman concluded: ‘I don’t know how to do this for the next two weeks or more.’

It’s not just couples who are stuck at home annoying each other.

One mum said she is co-quarantining’ with both her husband and her child – both of whom are ‘extreme picky eaters’.

‘One is a Tiny Human, who thinks I’m a short order cook, another is the husband, who won’t eat the same thing two days in a row, refuses to eat meat that has been frozen for more than three days, says everything I cook gives him heartburn because I use the “cheap stuff”,’ she said.

The woman said it’s ‘mental gymnastics trying to do any kind of meal planning’.

‘It makes me wish for my Russian study abroad host mum, whose rule is “eat what I provide or you starve”.’ 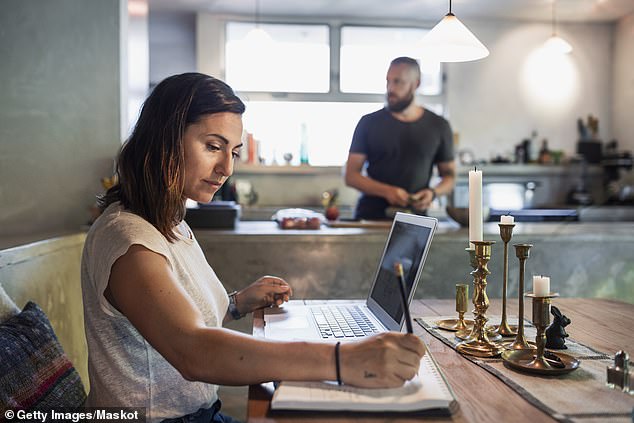 Anyone who has been to the supermarket in recent weeks around the world will know how difficult it is to get your hands on staples like rice, pasta, eggs, milk and toilet paper.

And for some couples, they said this is causing a degree of stress in their relationship.

‘Yesterday, my boyfriend and I fought because I loaded up on $200 worth of groceries, but only got fruit, snacks and veggies and quesadilla and “nothing we could make a big batch to freeze”,’ one woman said.

‘I thought he was overlooking how nice it was for me to even go and pick up the groceries and he thought I was being short-sighted and irresponsible by not getting ingredients that would last us longer in the event of a lockdown or quarantine.’

She said they ended up fighting ‘dramatically’.

‘I felt sheepish afterwards that it was about GROCERIES. Only in the corona era would tensions be so high.’

One woman said she didn’t expect her boyfriend to be policing her working hours.

She wrote: ‘Literally this am my boyfriend asked me to make him a bagel and I told him “no I’m working, and he actually looked up at me and said “it doesn’t look like you’re working, it looks like you’re staring out the window”.’

What are the survival tricks your relationship needs?

1. Establish physical work boundaries: Sitting at the kitchen table together could result in tensions created by a clash of laptops, phones and paperwork. Life coach Amana Walker said: ‘Agree your “work boundary” with your partner as soon as possible. If you leave it too long you will start to get in each other’s way and tension will build.’

2. Create date nights: When spending long periods of time with each other there is no longer an opportunity to miss your partner or save up stories to discuss at the end of the day. Amana said: ‘If you’re able, plan date nights so you can have time away from your usual surroundings. Go for a walk together at lunchtime or at weekends.’

4. Communicate how you feel: Self-isolating can lead people to feel bored, agitated and even frustrated as they have no option but to remain at home. But you need to pay attention to your emotions and communicate them as effectively as possible.

5. Be grateful: Acknowledging when your partner does something thoughtful could make for a happier working and living environment. Small acts of kindness like emptying the dishwasher can help.

The final disagreement couples were struggling with is issues around air conditioning, which one woman said is causing issues in her household.

‘My husband and I share a study because we’re not rich folks with two studies,’ one woman said.

‘Usually, I work from home so I use it in the day and he uses it in the evenings. Now, we both keep bumping into each other as the wi-fi is best in the study and weaker in other areas.

The woman said when one of them gets a call, they have to signal to one another that they need to move into different rooms.

While the stories shared with Meg are available via The Social Distance Project, she is encouraging people to make donations for as little as $1, which she then gives to multiple charities.