Courtiers resented having to serve ‘an actress on a cable show’, bombshell book claims

Royal courtiers joked that Meghan Markle would start a beauty line when she left the royal family, a new bombshell books will claim.

The book – Finding Freedom – is also expected to claim that they resented having to serve ‘an actress on a cable show’, and that Harry and Meghan tried to air their frustrations in the courtiers, but their complaints fell on deaf ears.

Extracts of the hotly anticipated book are being published this weekend by The Times and The Sunday Times, and will lift the lid on the Sussexes exit from The Firm.

The Times has reported that one aide made a joke about Meghan launching a line of beauty products once she left the royal family.

More accurately, The Sussexes had hoped to earn a living off commercial deals with a social impact, speaking engagements and production deals.

‘Harry and Meghan would have reached a more beneficial agreement to allow them to live the life they wanted if they had handled things in a private, dignified way,’ a senior Buckingham Palace aide explained to The Times.

Prince Harry, Duke of Sussex and Meghan, Duchess of Sussex at the Commonwealth Day Service 2020 on March 09, 2020 in London

Another courtier said: ‘They oversimplified what they were asking for. They thought they’d give Charles their rider, negotiate over email, rock up to London, give three months’ notice and fly back to Canada.’

Senior courtiers in other households – the so-called men in grey suits – did what they could to reign in the popularity of Harry and Meghan, even as they were ‘propelling the monarchy to new heights around the world’, the book claims.

The couple tried for months to bring their grievances to other senior royals – to no avail – but there was only a handful of people working at the palace that they could trust.

The authors say the Sussexes felt their complaints were not taken seriously and believed other royal households were leaking stories about them to the press.

‘There were just a handful of people working at the palace they could trust,’ the authors write.

‘A friend of the couple’s referred to the old guard as ‘the vipers’.

‘Meanwhile, a frustrated palace staffer described the Sussexes’ team as ‘the squeaky third wheel’ of the palace.’

The Telegraph has reported that staff appeared to turn their noses up at the idea of serving ‘an actress on a cable show’ when they had signed up ‘to serve Queen and country.’

The fact that Meghan had reportedly made Kate cry during a bridesmaid’s dress fitting for Princess Charlotte did not help to endear her towards Cambridge loyalists either.

The book’s authors, Omid Scobie and Carolyn Durand, said: ‘Although Meghan tried to make eye contact with Kate, the duchess barely acknowledged her.’

Mr Scobie told the Times: ‘To purposefully snub your sister-in-law… I don’t think it left a great taste in the couple’s mouths.’

The authors describe a culture of increasing tension between the Sussexes and other members of the royal family.

Harry and Meghan ‘liked being in control of their narrative’ in the early days of their marriage, the authors say.

But being told to operate under Buckingham Palace’s umbrella after splitting their household from the Cambridges’ was ‘a big disappointment to them’.

‘As their popularity had grown, so did Harry and Meghan’s difficulty in understanding why so few inside the palace were looking out for their interests. They were a major draw for the royal family,’ the authors write.

The book says the Sussexes even considered breaking protocol by springing a surprise visit on the Queen when they believed they were being blocked from seeing the monarch. 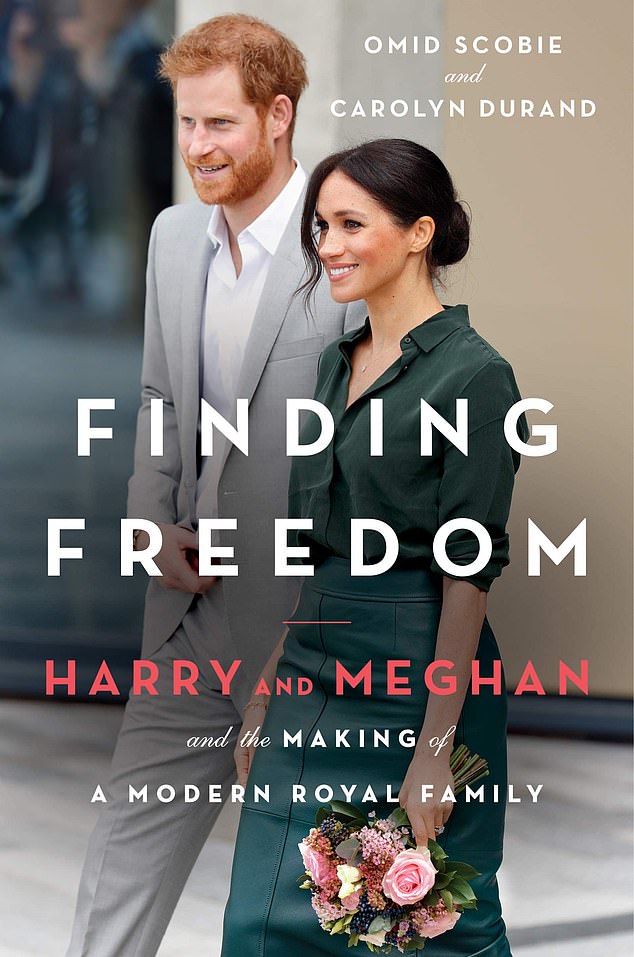 A spokesman for Harry and Meghan said the couple did not contribute to the book, but he did not deny the content of The Times’s extracts.

The spokesman told the PA news agency: ‘The Duke and Duchess of Sussex were not interviewed and did not contribute to Finding Freedom.

‘This book is based on the authors’ own experiences as members of the royal press corps and their own independent reporting.’

The revelations come after the Sussexes launched legal action in Los Angeles after drones were allegedly used to take pictures of their 14-month-old son Archie.

A complaint filed at the Los Angeles County Superior Court on Thursday claims an unnamed individual photographed Archie at their home during lockdown.

The lawsuit alleges the couple have been hounded across North America by paparazzi and targeted with incessant intrusions into their private life.

Harry and Meghan – who departed the Royal Family in March, saying they wanted a more private life – ‘seek no special treatment whatsoever’ and only want the right to privacy, the lawsuit says.

The couple say they have ‘done everything in their power to stay out of the limelight’ except in relation to their work, which they accept is newsworthy.

Prince Harry began falling out with William years before Megxit and tensions came to a head when his brother asked ‘are you sure about this?’ over his plan to marry Meghan Markle, new biography claims

Prince Harry and Prince Williams’ relationship began to break down shortly after the younger royal announced he was going to marry Meghan Markle.

A new biography claims ‘real damaging things were said and done’ in the run up to the wedding.

However, Prince William took his brother aside in November 2017 and asked: ‘Are you sure about this?’

According to the book, Finding Freedom by Carolyn Durrand and Omid Scobie, the Cambridges ‘did not make Meghan feel particularly welcome’ when she arrived in Britain.

A source told The Telegraph: ‘It wasn’t a rivalry between the brothers but more a sense that they would be competing over who would lead on their various issues.

‘Harry felt awkward as a plus one. They’d turn up at premieres and there was this sense that he felt a bit like a spare part.

‘Long before Meghan he wanted to change things. He wanted to control his own narrative. He would say, ‘Why can’t we use social media or record videos and cut out the press?”

Kate and William, according to sources were happy with the traditional royal response of ‘never complain, never explain’.

Instead, Harry and Meghan wanted to respond to every negative story.

Royals sources claimed this approach was counter productive with some claiming Meghan was ‘very difficult to work for’.