Coventry is assessing the feasibility of Scalextric-style technology that would charge electric vehicles (EVs) as they go.

Known as dynamic wireless charging (DWC), the technology would ensure an uninterrupted power supply for EVs while in motion.

The £419,000 ‘DynaCov’ project, backed by Coventry City Council, Toyota, National Express, and others, would see electric coils embedded under asphalt on certain stretches of the city’s roads.

These coils, which would be connected to a mains supply, would wirelessly transmit power to a receiver in vehicles’ wheels.

Electricity would then be relayed from the receiver to the EV’s battery, providing it with a continuous source of power while in motion.

Usually, EVs have to be stationary to be recharge while they’re plugged into charging stations on road sides and in cars parks, taking up precious time for drivers.

DWC could be installed in cars or even bigger vehicles like buses or lorries allowing them to charge on the go and reducing the number of stops, saving time.

The system could also tackle ‘range anxiety’ – drivers’ fear that they don’t have sufficient charge on their EV to get them to their destination.

British non-profit research firm Cenex, another backer of the project, told MailOnline that it would be possible to retrofit existing EVs with the technology required for dynamic wireless charging, although this may be quite expensive.

However, many EV manufacturers including BMW and Tesla are already incorporating wireless charging technology into their vehicles.

Known as dynamic wireless charging (DWC), the technology would ensure an uninterrupted power supply for EVs while in motion 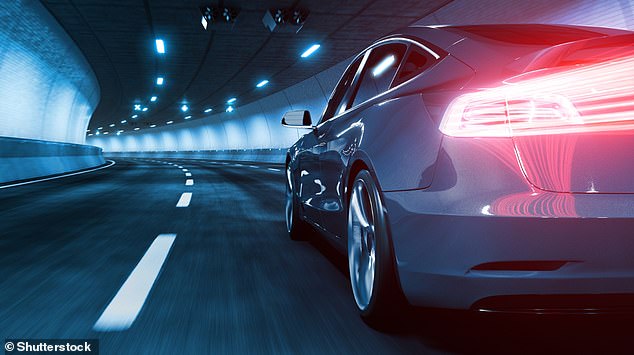 Coventry is assessing the feasibility of the £419,000 project. EVs could be adapted especially to receive their power supply from underground electric coils (stock image)

If the DynaCov concept proves feasible, a small section of Coventry road could be trialled before a wider UK rollout.

‘The project is currently a feasibility study, where we will be investigating the technical and economic viability of using dynamic wireless charging for buses and good transport in an urban environment,’ Chris Cox, head of energy systems and infrastructure at Cenex, told MailOnline.

The project will be led by Coventry City Council, and the below delivery partners will be subcontracted for various elements of the project:

‘If this proves that there is a positive business case for dynamic wireless charging, then we will progress to a demonstrator which will involve installing the transmitters in the road and retrofitting buses with the wireless receiver pads.

‘This would initially focus on a single road in order to prove the concept and collect data.

‘However once proven technically it would be possible to install this across key roads throughout cities, or even on motorway networks.’

Once rolled out, DynaCov would turn sections of Coventry’s roads into something like Hornby’s legendary range of Scalextric toy car racing sets.

Scalextric cars are powered as they run, thanks to metal strips through the track that pass an electric charge.

Under DynaCov, charging coils wouldn’t be visible under the asphalt on the roads, however, and the entire system would be wireless.

The technology would also enable static wireless charging (SWC) – where a vehicle is stationary but can charge without needing to plug in, much like a wireless charger powering a smartphone – if the driver has more time to spare.

DynaCov is being led by the innovation branch of electricity company Western Power Distribution (WPD) with backing from multiple partners.

Experts behind the initiative say battery technology is not yet sufficient ‘to meet the economic and technical requirements of larger and heavier urban and freight vehicles’, such as buses and delivery vehicles. 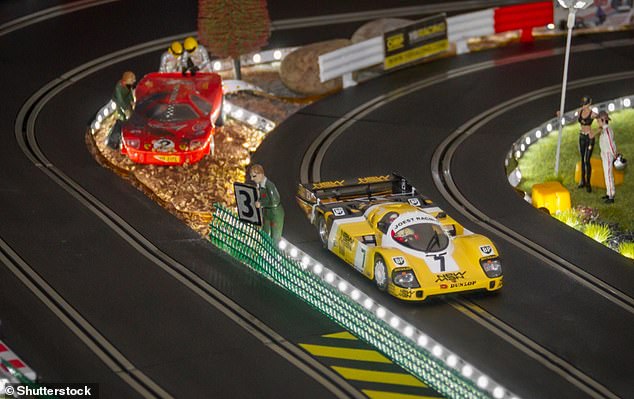 ‘There are sectors of the transport system, such as buses and HGVs, which have previously proven challenging to electrify due to their high energy demands,’ said Shamala Evans from Coventry City Council.

‘However, dynamic wireless power transfer is a technology which has the potential to provide the ability to charge on the move and will be transformational in accelerating the electrification of our transport networks.

‘Coventry’s ambition is to create a zero-emission road transport city and we believe this initiative will support our bid to become an all-electric city going forward.’

According to WPD, the project will ‘assess the viability’ and research the current technology available for the technology on Coventry’s roads, as well as the expected power requirements.

Over the space of about a year, WPD will carry out modelling and simulations to provide distribution network operators – companies licensed to distribute electricity – with information on how it could be done.

WPD has launched the project this month and plans to publish the results by February 2022. 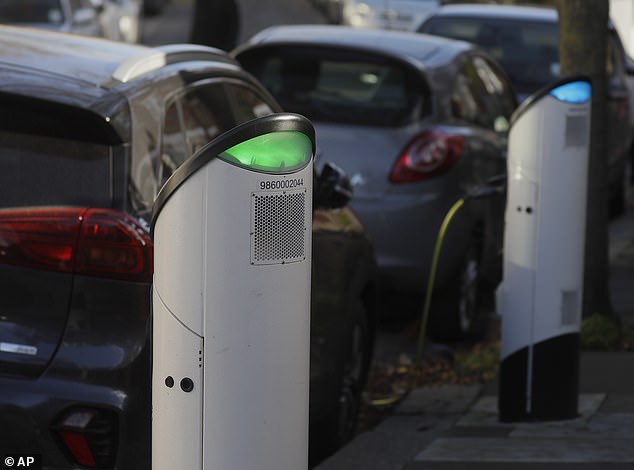 An electric car charges on a street recharging port in London. Britain will need new charging methods to help heavy duty vehicles on long journeys from running out of charge

‘The ability to charge your vehicle while on the move would be a massive game-changer for the nation,’ Ricky Duke at WPD Innovation told Air Quality News.

‘The launch of our study marks an important milestone in our journey towards identifying new and exciting ways to support the mass adoption of EVs across the country.

‘We’re thrilled to be announcing the launch of our pioneering project exploring the feasibility of wireless, on-the-go charging for electric vehicles in the UK.

‘As we look to the New Year and start to think about a post-Covid-19 world, it will be ground-breaking tech and innovation such as this that paves the way to the UK’s green recovery and helps us achieve the government’s net zero target by 2050.’

Initiatives like DynaCov could be crucial in the UK’s transition to solely having EVs on our roads, as part of the government’s ban on the sale of petrol and diesel cars from 2030.

Greenhouse gas emissions from petrol and diesel vehicles need to be eliminated to achieve the government’s net zero emissions target by 2050. 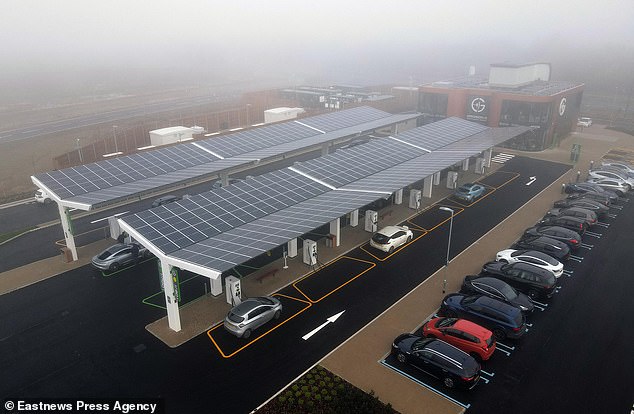 The UK’s first Electric Forecourt near Braintree, Essex, is open for business. The government is pumping money into a transition to EVs

The UK’s EV charging point network will have to expand by up to 20 times current levels to cope with increased demand, it’s recently been estimated.

Government said last month that it will pump £1.3 billion into scaling-up the rollout of charge points for EVs in homes, streets and motorways across the UK.

According to Department for Transport figures, there were 19,487 public charging devices available as of September 30 this year, up 7 per cent from three months earlier.

More than 1,200 charging devices for public use were installed in the UK between July and September, recent Department for Transport (DfT) analysis shows.

Britain’s first forecourt only for EVs in Braintree, Essex, has also opened this month.

The EV forecourt is the first of a £1 billion nationwide network of 100 electric forecourts planned over the next five years.

A target set by the government in June 2019 will require the UK to bring all greenhouse gas emissions to net zero by 2050.

Former Prime Minister Theresa May had announced the target, saying the plans were ambitious but crucial for protecting the planet for future generations.

The move will require huge changes such as more renewable electricity generation, phasing out new petrol and diesel cars by at least 2035 and a 20 per cent cut in beef and lamb consumption.

‘The UK kick-started the Industrial Revolution, which was responsible for economic growth across the globe but also for increasing emissions,’ said said Energy and Clean Growth Minister Chris Skidmore at the time.

‘We’re leading the world yet again in becoming the first major economy to pass new laws to reduce emissions to net zero by 2050 while remaining committed to growing the economy – putting clean growth at the heart of our modern Industrial Strategy.’

Net zero means any emissions would be balanced by schemes to offset an equivalent amount of greenhouse gases from the atmosphere, such as planting trees or using technology like carbon capture and storage.