A returned traveler infected with Covid-19 has sparked an alert for thousands of Melbourne residents – including spectators at an AFL game – after he flew in from hotel quarantine in Adelaide and caught public transport across the city.

About 50,000 fans at Friday night’s Richmond v Geelong footy clash at the MCG have been contacted by the AFL with concerns they could have been exposed to the virus on the train after the game.

The development greatly expands a list of people who are being told by health officials to watch for symptoms, be tested and self-isolate – with those on the man’s Jetstar flight and fellow diners at a CBD Indian restaurant also at risk. 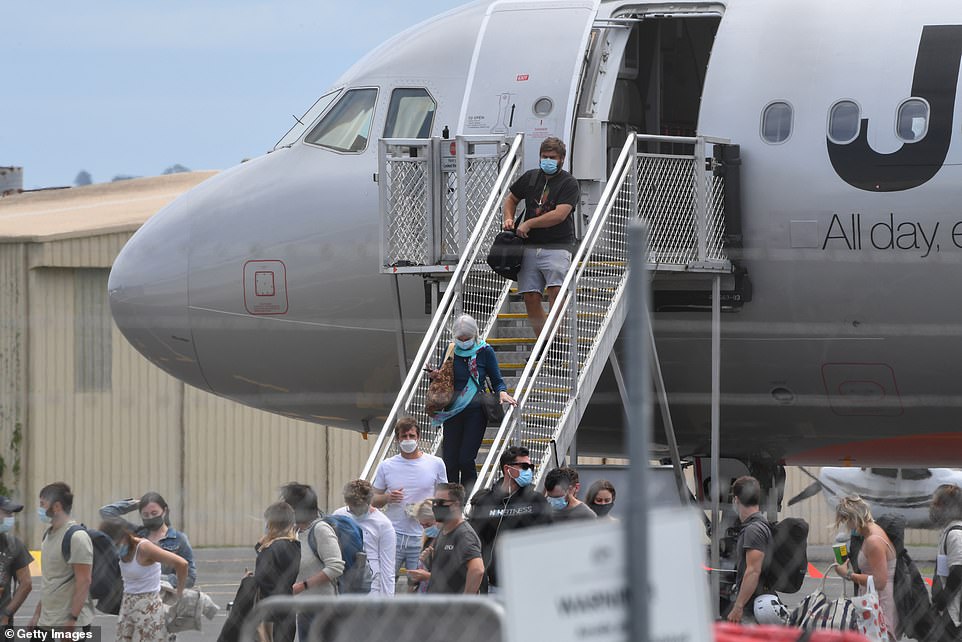 There were approximately 100 passengers on board the Jetstar flight JQ771 from Adelaide to Melbourne with the man (pictured, stock image of another flight) 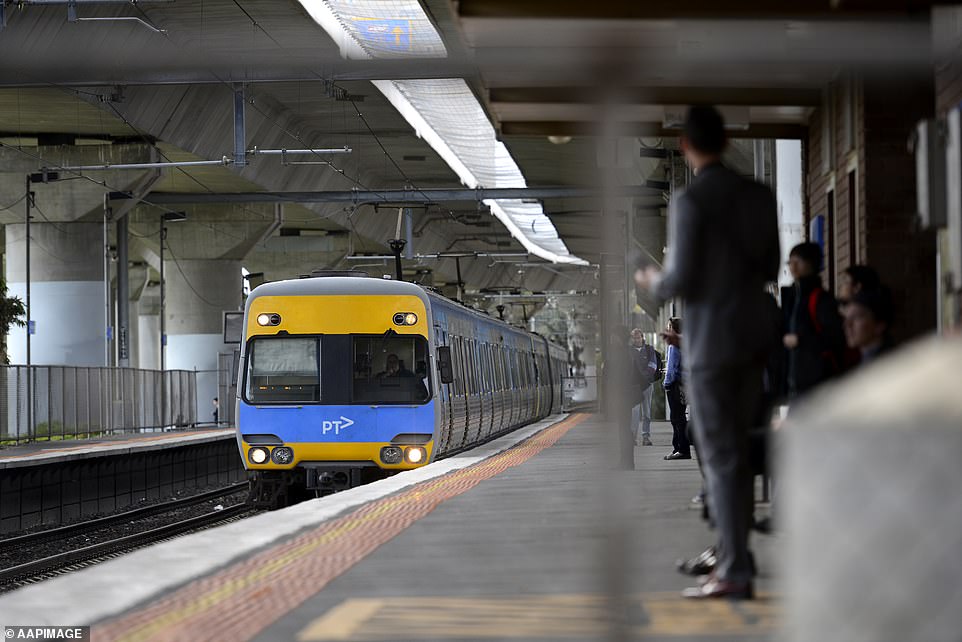 Anyone who caught the 5.28pm Craigieburn to Southern Cross service or the 10.20pm Flinders Street to Craigieburn service on the night of May 7 must isolate until they return a negative test. Pictured is a Melbourne train 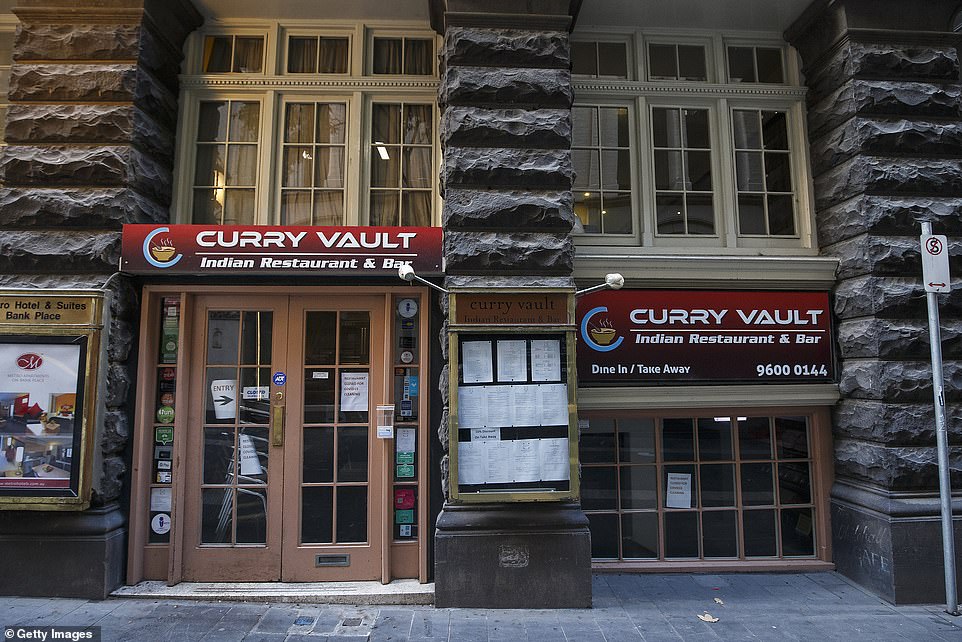 The man had arrived in Australia from India, travelling through the Maldives and Singapore before arriving in South Australia where he completed hotel quarantine with negative Covid tests.

The man, in his 30s, then flew into Melbourne on May 4 and continued to his home in Wollert in the city’s north.

About 100 passengers on Jetstar flight JQ771 from Adelaide to Melbourne on May 4 have been told isolate and get tested for coronavirus regardless of symptoms by health authorities.

Not developing symptoms until May 8 and not returning a positive test until after the weekend, the man dined at an Indian restaurant last Friday night in the CBD that he travelled to by train.

The man’s return train from Flinders St in the city on the Craigieburn line between 10.20pm and 11.05pm is where he could have exposed thousands of footy fans to to Covid as they made their way home. 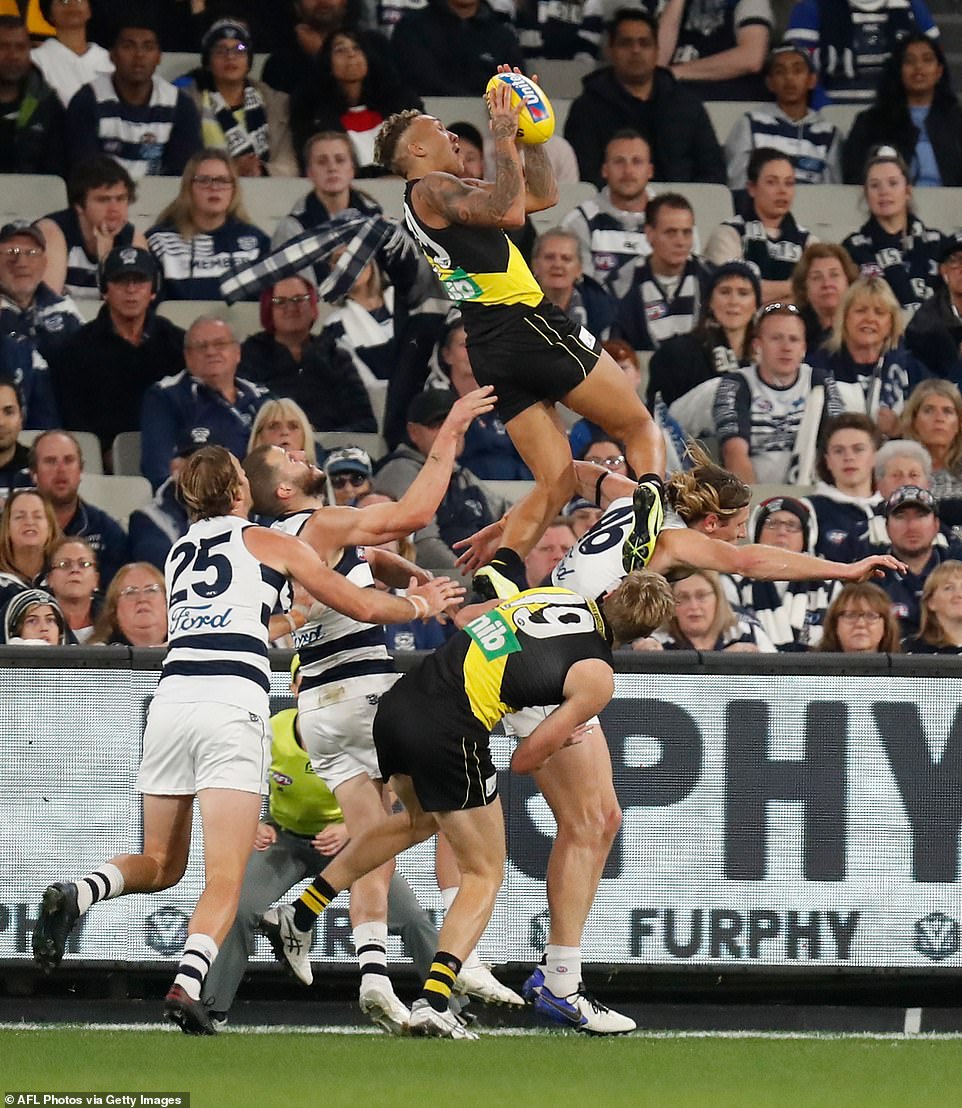 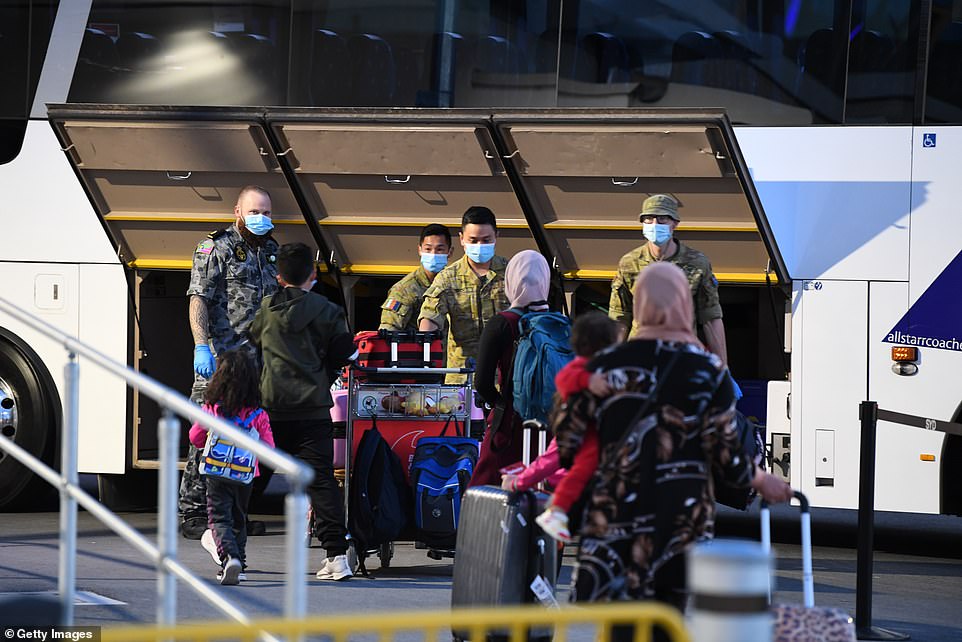 On Wednesday, Victoria’s Health Minister Martin Foley said officials were in the process of ruling out potential exposure sites.

Mr Foley said the chance Covid had spread to any of the other passengers on the Jetstar flight was ‘improbable’ – but some have already continued travelling on to other states.

Health officials have also expressed concern about the decline in Victorians using the QR code check-in system, which has created a headache for contract tracers who are tracking the man’s movements.

The two train services the man caught going to and returning from the Curry Vault restaurant have been listed as Tier 2 exposure sites.

Anyone who caught the 5.28pm Craigieburn to Southern Cross service on Friday May 7 or the 10.20pm Flinders Street to Craigieburn service on the same night must get tested and isolate immediately until they receive a negative test. 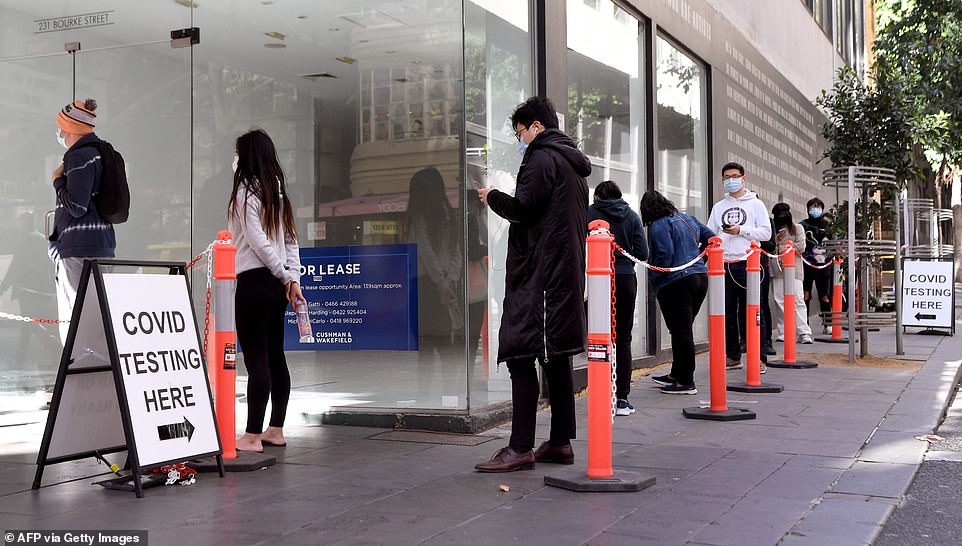 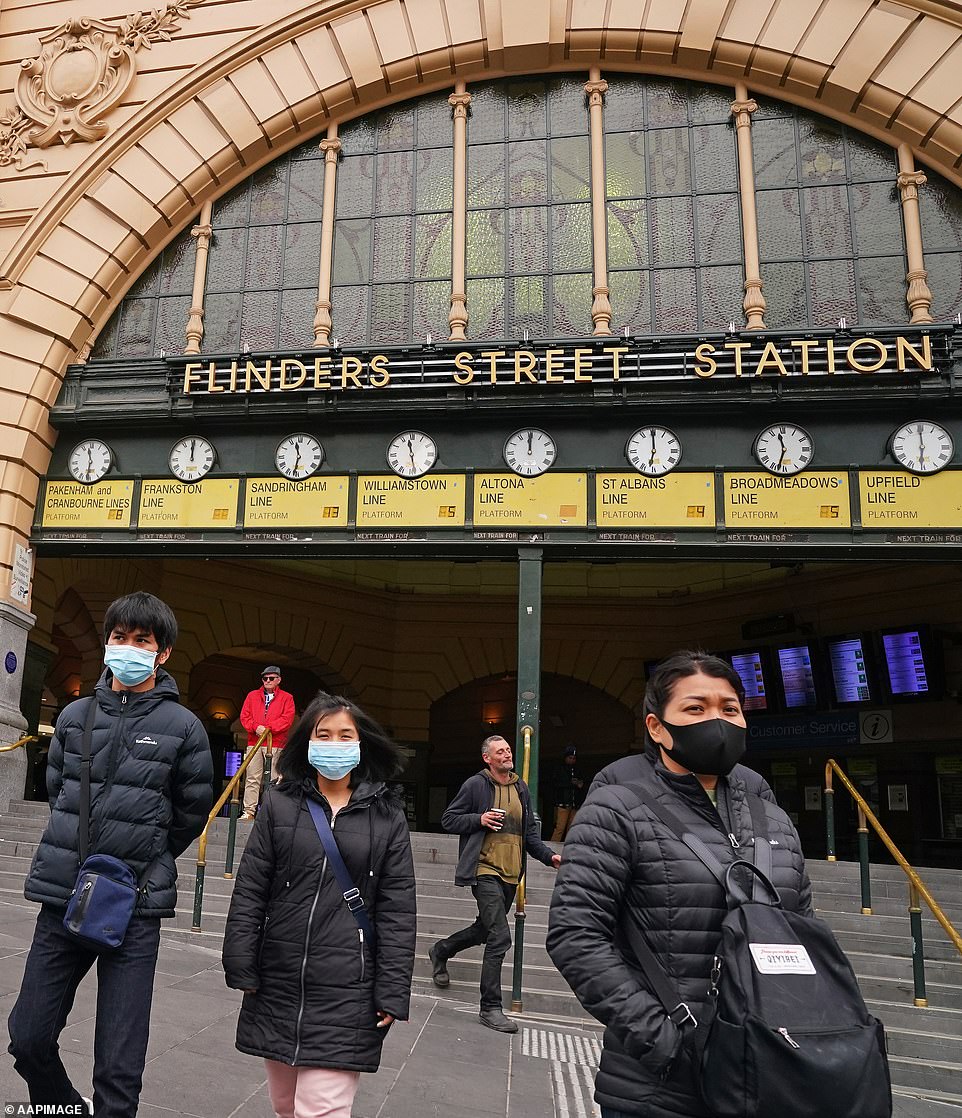 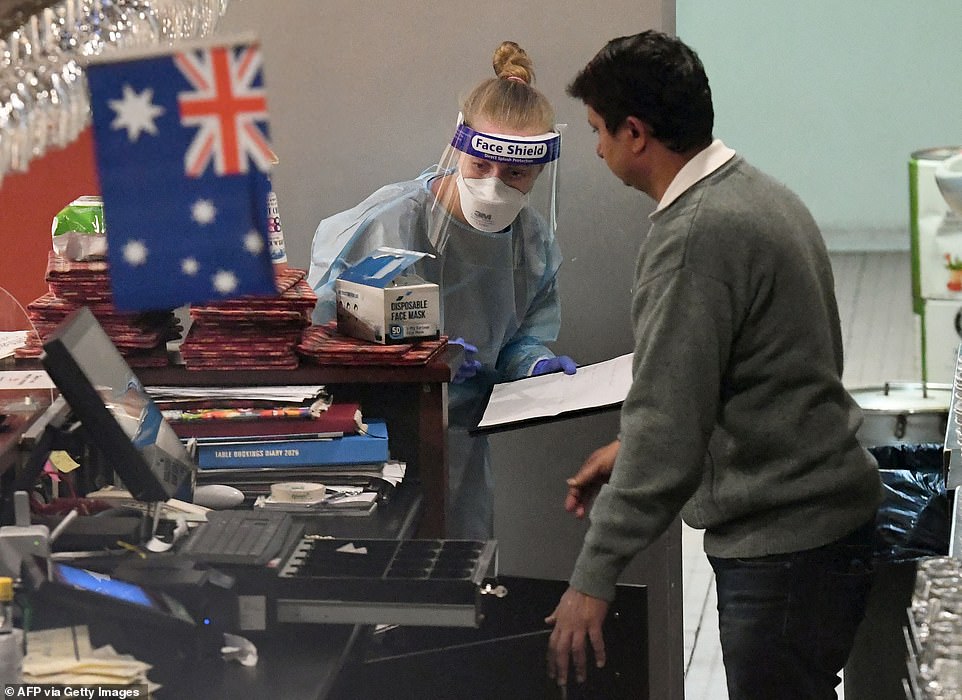 So far, 18 people who were at the Curry Vault have been tested with three already returning negative results (pictured, health officials speaking to a restaurant owner)

‘This advice applies for people in any carriage, who got on and got off at any station,’ the alert states.

‘If you travelled around this time but are unsure about which service you caught, please get tested.’

‘If you were at the stations around these times but didn’t get on the train, monitor for symptoms.’

Flinders Street, Southern Cross and Craigieburn stations have also been declared Tier 3 exposure sites – which means  anyone who was at any of these stations on May 7 must monitor for symptoms.

The Curry Vault restaurant has been declared as a Tier 1 site – the most serious, which means anyone there between 6:30pm and 9:30pm must isolate for 14 days, regardless of the test result.

So far, 18 people who were at the Curry Vault have been tested with three already returning negative results.

The three household close contacts of the man have also tested negative.

Victoria’s COVID-19 response commander Jeroen Weimar has expressed concern about the drop in residents checking into venues via the QR code check-in system. 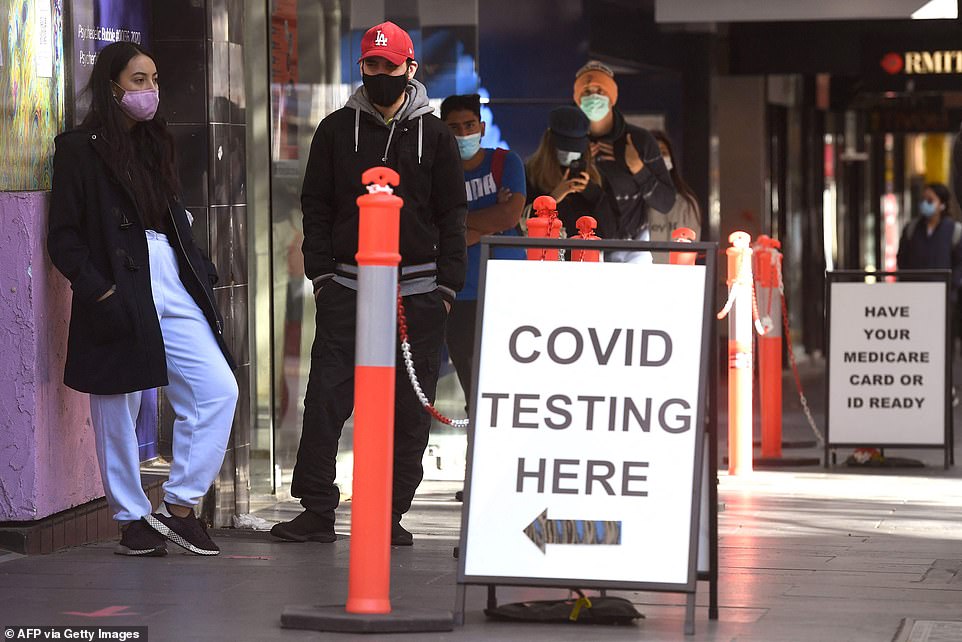 Some of the diners at Curry Vault Indian restaurant on Friday night did not check-in.

‘Based on information provided, we think there are likely to be more people in that restaurant than are on the QR code system at the moment. But we don’t know who they are,’ Mr Weimar said.

‘That’s why it’s so important that we all maintain the basic behaviours.

‘Wear a mask in public transport and in taxis and when you can’t isolate, use the QR system wherever you go.’

Curry Vault Indian Restaurant and Bar has been forced to close for at least 14 days.

The latest setback comes after the restaurant lost more than $100,000 in 2020 due to multiple lockdowns.

‘It’s very concerning, it’s such a terrible feeling when innocent people caught up in this,’ restaurant owner Kailash Sharma told the Herald Sun.

‘We are closed for a deep clean until 10pm tonight and all affected staff members have self-isolated. 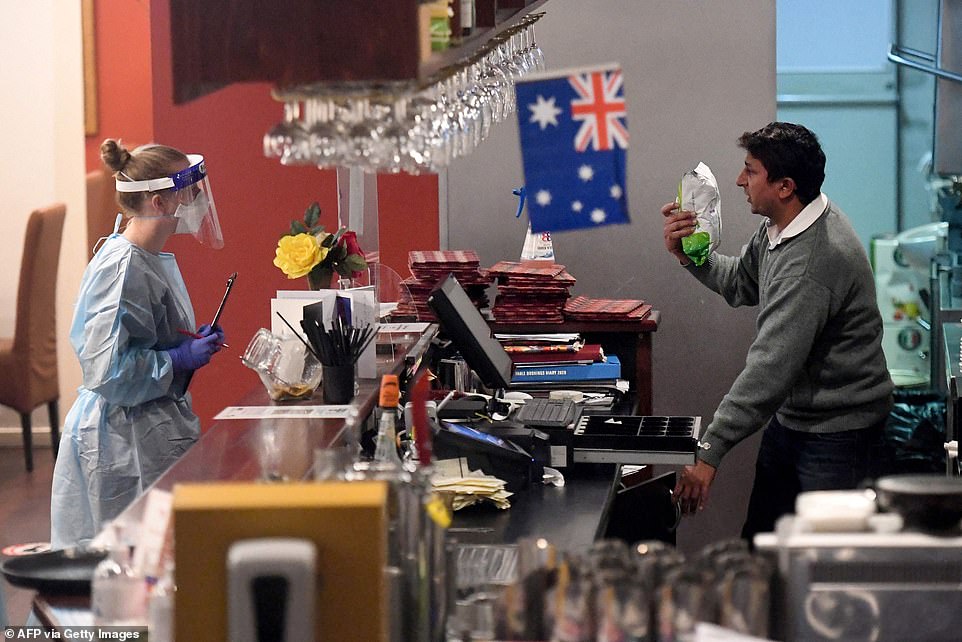 TIER 1 (isolate for 14 days, regardless of result)

TIER 2 (Get tested and isolate until a negative test):

‘I’m just so shocked this has all happened. We’ve been closed for almost a year and now this.

The latest case has put New South Wales and Queensland on high alert.

An online declaration form will be mandatory to apply for Victorian visitors heading into those states, which applies from 6am on Wednesday, May 12 in NSW and 1am Thursday, May 13 in the Sunshine State.

‘People arriving in New South Wales from the Greater Melbourne area must complete a declaration (form) which confirms they have not attended a venue of concern,’ NSW Health said.

‘If any travellers have attended any of the identified venues, they must contact NSW Health immediately.’

Some of the identified venues in Greater Melbourne include the likes of Bayside City, Frankston City, Knox City and Mornington Peninsula Shire. 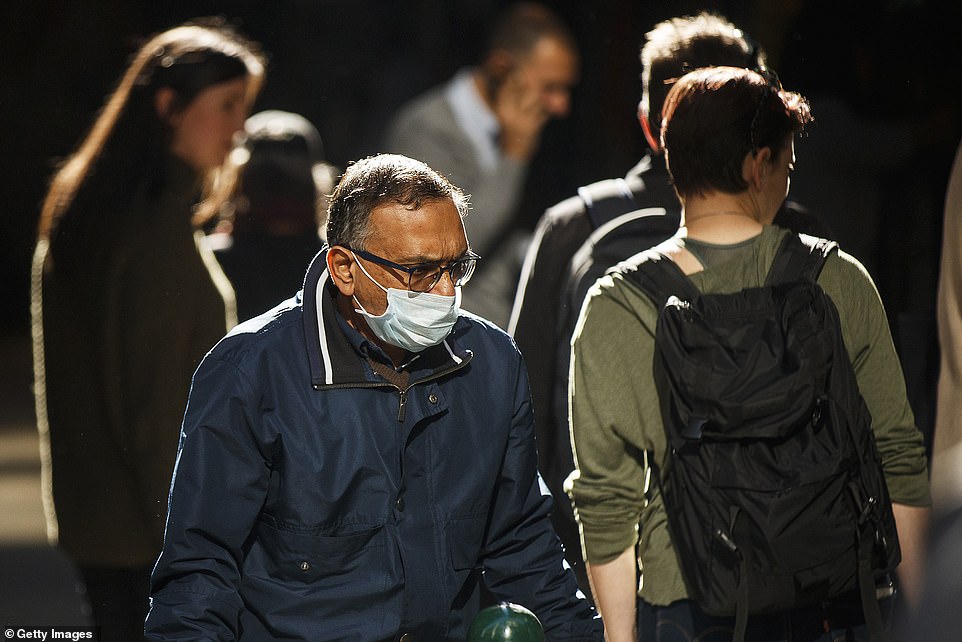 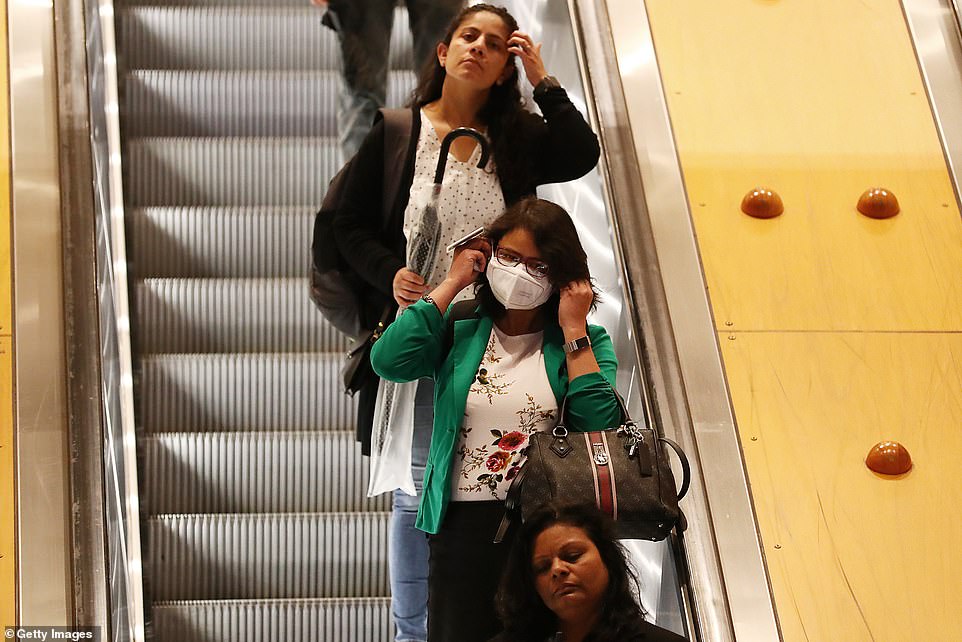 A similar announcement emerged from the Queensland Premier on Tuesday night.

‘From 1am Thursday 13 May, anyone arriving into Queensland who has been to any of the locations in Greater Melbourne must go into hotel quarantine for 14 days,’ Ms Palaszczuk said.

‘Anyone in Queensland prior to 1am Thursday who has been to any of the locations is also asked to quarantine at their home or arranged accommodation and also get a Covid-19 test.’

The infected Melbourne man was staying in a room adjacent to a positive case in the Playford medi-hotel and is believed to have contracted the virus in the final days of his quarantine following his last test.

South Australia’s Chief Public Health Officer Professor Nicola Spurrier said the man was not believed to be infectious when he caught the flight back to Melbourne.

The man tested negative to his mandatory tests while in hotel quarantine and authorities believe he only became infectious after landing in Victoria.