Students will be required to get weekly Rapid Antigen Tests and wear a face mask as major changes are rolled out across the classroom ahead of the new school term.

States and territories across the country are set to unveil their Covid-safe plans in the coming days.

NSW is tipped to announce students will be required to get weekly RATs while Victoria is set to introduce a mask mandate.

The federal government has agreed to split the cost of surveillance testing for those states and territories wanting to roll out such a scheme.

But no consensus was reached at Thursday’s national cabinet meeting on the best way of approaching the first term of 2022.

NSW and Victoria have vowed to keep on track with reopening as scheduled, while Queensland and South Australia have pushed back the start of school to allow more children to get vaccinated.

Tasmanian schools will return on February 9 with rapid antigen tests and masks provided to teachers, and teachers will need to wear a mask indoors.

ACT Chief Minister Andrew Barr says the government is planning for a return to on-campus learning for the start of term one, but more details would be made available when the plans are finalised.

Prime Minister Scott Morrison said there was no health advice stating that testing was needed in schools, but keeping them open was a top priority for health and the economy.

‘States and territories will make decisions to keep schools open. We need the schools open, we need them to stay open,’ he said.

‘That is why we have agreed to be supportive and facilitative of that decision, where they choose to make it.’ 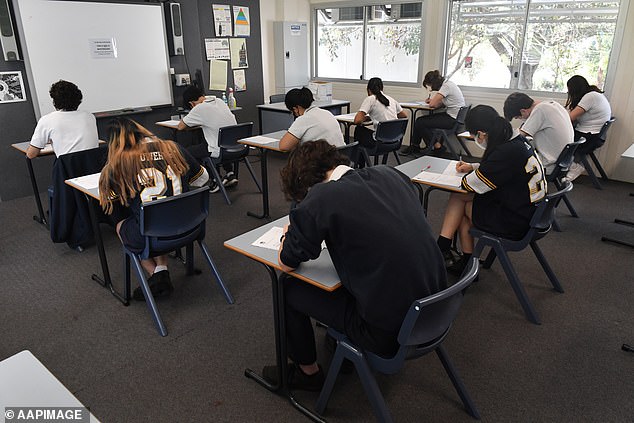 NSW and Victoria have vowed to keep on track with reopening as scheduled, while Queensland and South Australia have pushed back the start of school to allow more children to get vaccinated

States and territories are set to unveil major changes to the classrooms as students prepare to begin the first term of the new year.

The definition of a close contact – at least four hours of contact with a COVID-positive household member – won’t be extended to cover contact within schools grounds or buildings.

‘If you are sick you should not be coming to school,’ Chief Medical Officer Paul Kelly said.

But Professor Kelly acknowledged that while the illness in children was ‘very mild’, there was a risk a student would become infected and bring the virus home.

He said a study conducted in the second half of 2021 in NSW showed 15 children were admitted to intensive care out of 17,000 Delta cases.

Meanwhile, plans are being made for the rollout of the protein-based Novavax vaccine in February.

It is believed tens of thousands of Australians have delayed their vaccination until the vaccine was approved, and the green light is expected to drive up adult jab rates in coming months.