NSW has reported a pandemic record 6,288 new Covid-19 cases while Victoria has recorded 2,108 and six deaths on Christmas Day.

Hospitalisation rates in NSW have increased to 388 – up from 382 reported on Friday. The number of ICU patients has dropped to 52 – down from 53.

In Victoria, hospitalisations have dipped to 361 – down from 397 – while ICU rates have followed the same trend with 71 patients being treated – a dip from 75.

The cases announced on Saturday comes as Australians gather for another Covid-19 Christmas with restrictions reintroduced and flights cancelled at the last minute for travellers. 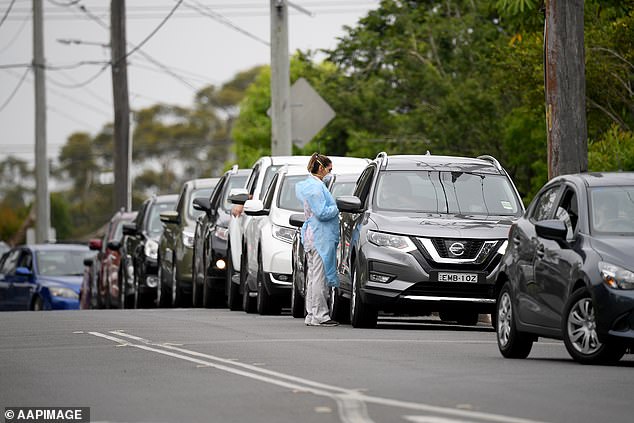 Hospitalisation rates in NSW have increased to 388 – up from 382 reported on Friday. The number of ICU patients has dropped to 52 – down from 53 (pictured, testing queue at drive-thru clinic at Beecroft, Sydney’s upper north shore) 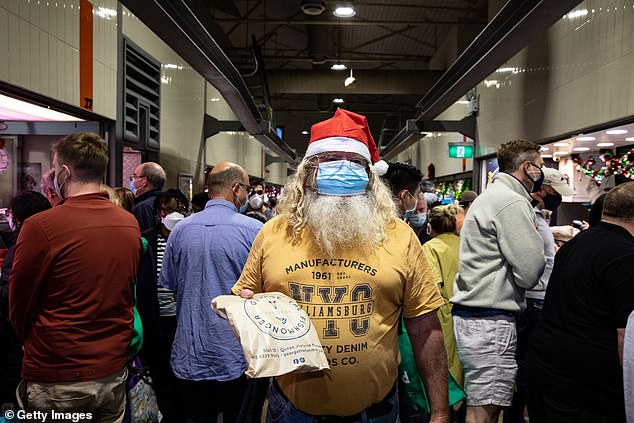 Australians are gathering for another COVID-19 Christmas as cases continue to soar around the country (pictured, shoppers at Queen Victoria Market in Melbourne on Friday)

Compulsory mask-wearing is now in place across almost every state and territory as leaders try to limit the spread of the highly-infectious Omicron variant over Christmas.

Dozens of Jetstar and Qantas domestic flights out of Sydney were cancelled on Christmas Eve as frontline staff deemed close contacts are having to test and isolate as the virus spreads through the city.

Almost 30,000 people have been diagnosed with the virus in NSW in the past nine days.

There were 5612 infections and one death reported in NSW on Friday. Meanwhile, Victoria recorded 2095 cases and eight deaths.

High-risk, large public events in Western Australia have been scrapped and dancing banned except at weddings after a backpacker tested positive on Thursday.

Five additional cases were recorded in WA on Friday, one close contact to the original case and four casual contacts who were exposed.

A hostel in Perth’s south has been locked down to stop the spread.

Queensland reported 589 new daily infections, while South Australia had 688, Tasmania 27, the ACT 102 and the Northern Territory 10.

As infections continue to rise the federal government announced the wait for booster shots will be reduced twice in January.

Health Minister Greg Hunt on Friday said from January 4, boosters will be brought forward to four months after the second dose, down from five months currently, to help combat Omicron. 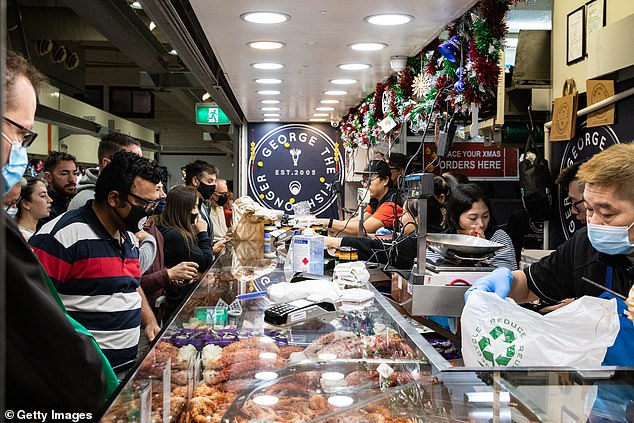 Compulsory mask-wearing is now in place across almost every state and territory as leaders try to limit the spread of the highly-infectious Omicron variant over Christmas (pictured, Queen Victoria Market on Christmas Eve)

Then from January 31, people can get boosters after three months.

About 7.5 million Australians will be eligible for their booster shot come January 4. This will jump to 16 million at the end of the month once the time frame is dropped to three months.

Prime Minister Scott Morrison and Opposition Leader Anthony Albanese used their Christmas messages to thank Australians for standing together and supporting each other during the pandemic.

‘This pandemic continues to buffet us … (but) Christmas is a time of hope and we are an optimistic people,’ Mr Morrison said.

Mr Albanese said Australians deserved to have a happy Christmas after a challenging two years.

‘With our borders opening up again, we’re getting back together. Off the Zoom and actually back in the room with family, friends and loved ones,’ he said.