Millions of Australians hoping to travel to Queensland for Christmas may need to rethink their plans, despite Scott Morrison’s calls for domestic borders to reopen before the end of the year.

Queensland deputy premier Steven Miles hinted travellers from Covid-19 ravaged New South Wales and Victoria could remain locked out in three months time as he unleashed a scathing attack on the Prime Minister.

Mr Miles accused the Prime Minister of giving people false hope and said he should be more focused on the health and wellbeing of NSW and Victoria and on international affairs than ‘what might happen in Queensland in a few months’ time’.

‘This bloke should focus on his job. You know, diplomacy is his job, international trade is his job, vaccination should be his job but we’re doing it,’ Mr Miles told reporters on Sunday.

‘Quarantine should have been his job, but we’re doing it. Keeping Covid out of New South Wales was his job and he failed at it.’

He accused the Prime Minister of offering false hope.

‘It’s not that simple and it’s misleading people to tell them that it should be that simple,’ Mr Miles added.

‘So they’re the considerations that we will need to make, because we are in the very fortunate position of not having the virus here.

‘Right now 17 cases, right now, compared to more deaths in NSW in one day than Queensland has had throughout the entire pandemic.’

‘When you look at the Gold Coast, a billion dollars will be lost in just this quarter,’ Mr Littleproud told Today on Monday.

‘They are the cheap casualty, according to the Palaszczuk government, of this Covid disaster.

‘We need confidence and certainty, but we need leadership.

‘We’re saying when you’re coming into the room (at national cabinet) and say you’re going to sign up to the plan, the Prime Minister needs to look to his left and right and know you’re there. Instead, Premier Palaszczuk has gone off in all sorts of directions.’ 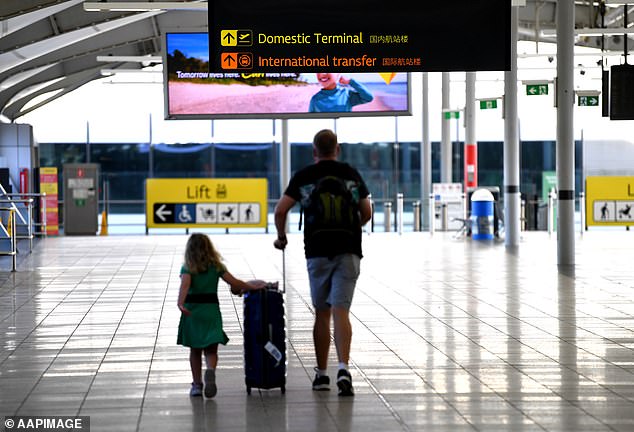 Earlier on Sunday, Mr Morrison said he could not see any reason why Australians should be kept cooped up in their states after the milestone set by the national reopening plan.

‘There comes a time when you just got to move on and get on with it,’ he told Weekend Sunrise on Sunday.

‘You’ve got to honour the arrangement you’ve made with the Australian people and that is once you get to 80 per cent vaccination, it is very clear that you can start opening up.’

Mr Morrison rebuked Queensland and Western Australian premiers Annastacia Palaszczuk and Mark McGowan for their refusal to open their borders on time. 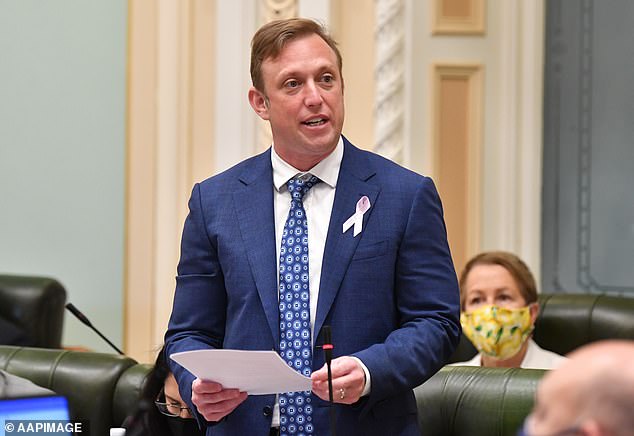 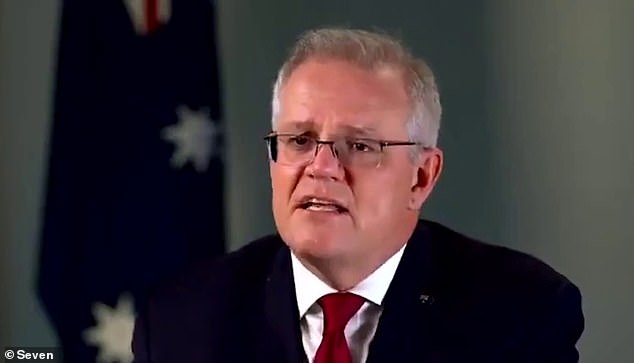 Ms Palaszczuk previously said she would like more research into the effect of Covid-19 on children before lifting border restrictions.

Similarly, Mr McGowan has shown resistance towards the targets agreed upon at national cabinet and said his borders are unlikely to open before Easter 2022.

While Mr Morrison admitted it was likely people would still have to check in to venues using QR codes and wear masks in some settings for a while, he demanded the rebel premiers give people ‘their lives back’.

‘I think that puts the big challenge on the premiers. I mean, they’ve had the power to do what they’ve been doing. They’re not new powers. They’ve always had them, he said.

‘Once you get to 80 per cent of your population that’s vaccinated, it’s very clear. I can’t see any reason why Australians should be kept from each other.

‘[Reopening by Christmas] is within the gift of governments. And that’s a gift I’d like to see us give them.’ 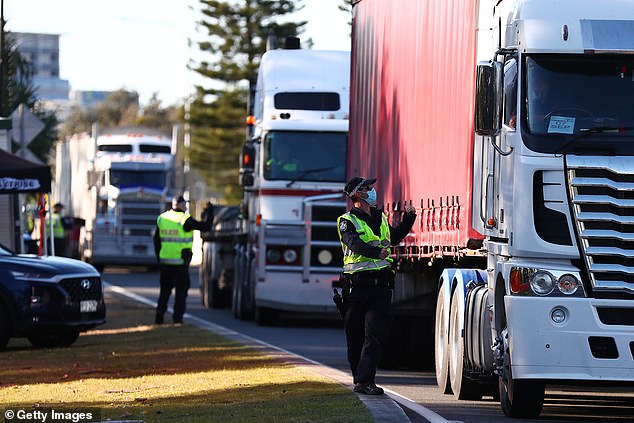 Queensland premier has been reluctant and said she wants research into the effect of Covid-19 in children. Pictured: Police at a truck stop on the Qld border 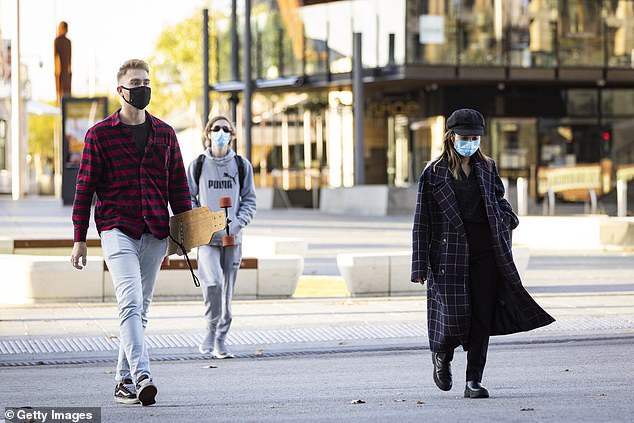 Mr Morrison said he was eager to move Australia to a largely post-pandemic footing as soon as possible with vaccination rates into the 80s and 90s not far off.

‘We can’t stay in second gear,’ he said. ‘We’ve got to get to top gear in living with the virus. And that’s where we need to be.

‘We’ve done remarkably well with our economy through the pandemic and saving people’s lives. But we must go into the next chapter.’

Mr Morrison acknowledged that some people will opt out of getting a vaccine, but said choices made by the minority should not impact the majority.

‘Once we get to 80 per cent – the fact is that everybody has had the chance to get vaccinated by that point,’ he said.

‘If you’ve chosen not to get vaccinated, that’s your choice. That’s fair enough.

‘But should that choice hold back the rest of the country from going forward engaging with those who are overseas, family members [who] are in India and other places who just want to come home?’

He declared those who decide not to get the jab were responsible for their own health. 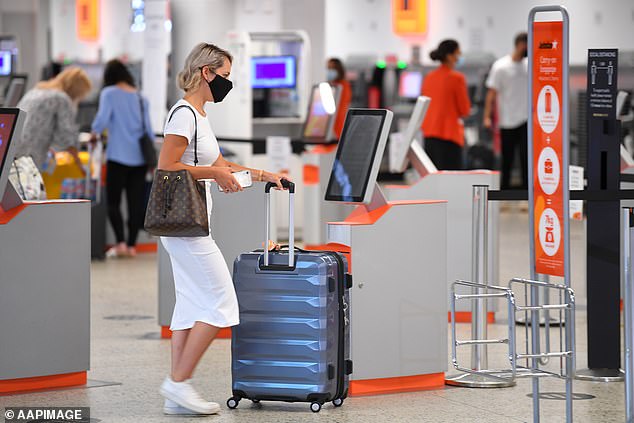 Once Australia’s population hits 80 per cent double jabbed international borders are expected to open with flight caps lifted for arrivals. Pictured: A woman at Melbourne airport

Victoria and NSW have unveiled separate roadmaps for reopening, which both hinge on vaccination rates of 70 and 80 per cent.

About 75.4 per cent of Australians older than 16 have had their first-dose of a Covid vaccine and 50.95 per cent are fully vaccinated.

‘I’m pleased to report 75 per cent of the nation’s 16s and over, have rolled up their sleeves to receive a first vaccine dose,’ Health Minister Greg Hunt wrote on Twitter.

‘This means we have less than one million first doses to go before we hit 80 per cent.’

During the Quad meeting at Washington DC over the weekend, the prime minister said stranded expats would be able to return home once 80 per cent of Australians are double jabbed.

The target is expected to be reached by December but Mr Morrison could not guarantee that the 45,000 stranded Aussies would be back in time for Christmas. 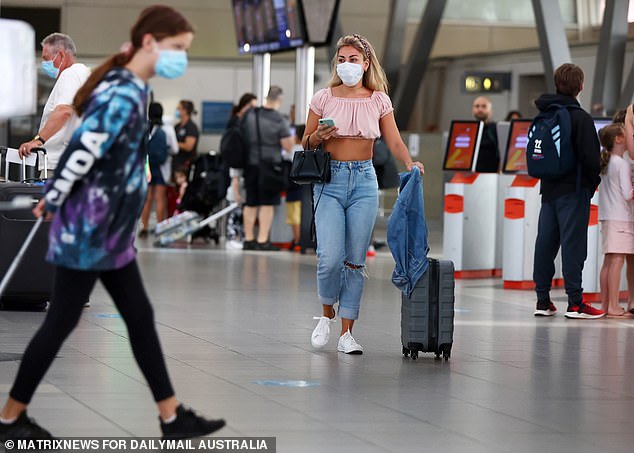 Mr Morrison could not confirm whether all 45,000 Aussies stranded overseas would make it home in time for Christmas. Picture: Woman at Sydney airport

He said arrival caps, which were introduced to help manage hotel quarantine figures, would be lifted allowing for more Australians to return home.

‘We have been running more commercial flights and if we need to, we will [run more], but once we hit 80 per cent vaccinations, then that means Australians will be able to travel in those states that are opening up,’ he told reporters on Saturday.

At 80 per cent vaccination international borders will reopen with caps on arrivals to be lifted as part of the country’s national roadmap to reopening.