BREAKING NEWS: South Australian health website crashes after the state reported its first batch of Covid cases after opening up the borders

The South Australian health website has crashed as the state reports 19 new cases of Covid-19 after opening up borders to other Australian states.

SA residents desperate to check for new exposure sites have been left in the dark after the official website crashed and simply advised people to ‘try again later’.

The worrying outbreak is the first string of cases in the state since SA reopened its borders to vaccinated travellers on November 23.

The South Australian health website has crashed as the state reported 19 new cases of Covid-19 after opening up borders to other states (pictured, a testing station in Hindmarsh)

Since SA reopened for interstate travel, the state has recorded 31 cases with 27 still active, but none have needed to be hospitalised.

Western Australia has slammed its doors shut to the state and upgraded its status to ‘medium’ Covid risk.

The new infections have forced both the state’s new governor and the opposition leader into isolation after they attended a 40-year school reunion.

Of the new cases, 16 have been traced back to the party, which was held at Theatre Bugs in Adelaide’s city centre on November 27.

Laboratory tests are still underway to determine if the school reunion infections are the new Omicron variant.

All of the cases who attended the Norwood event were fully vaccinated and none have been hospitalised at this stage. 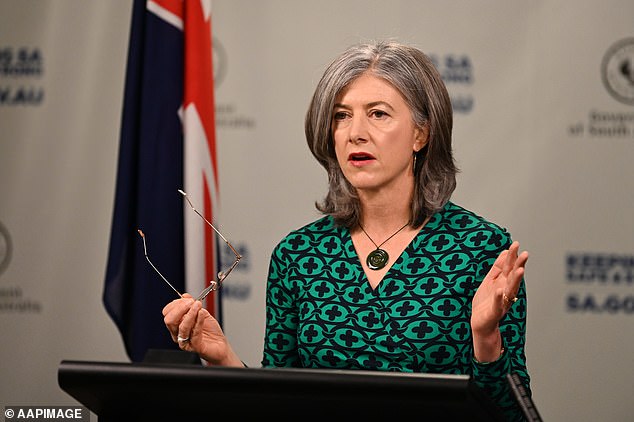 State health officials suspect an interstate traveller at the function was the source of the infection, who has then spread it to the rest of the group.

‘We can make an assumption that it is probably [linked to] somebody from interstate but because we’ve had our borders open since the 23rd, it could be somebody locally,’ she said on Thursday.

She reassured residents to remain calm as the state moves away from its Covid elimination strategy and learns to live alongside the virus.

‘In the past, we would have put huge numbers of people into quarantine and we would have listed public exposure sites,’ she said.

‘But we are in a different phase now that we’ve got a high number of people vaccinated.’ 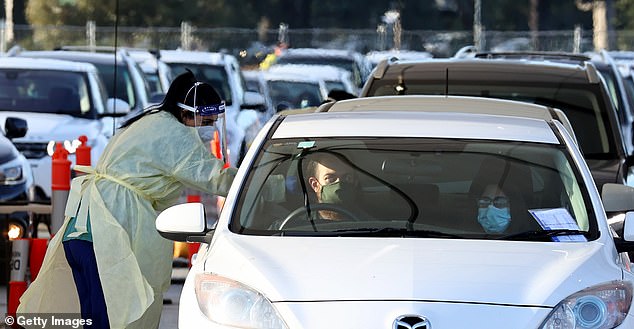 South Australians have been urged to remain calm as the state moves away from its Covid elimination strategy and learns to live alongside the virus (pictured, a testing site in Adelaide)

The Trinity Medical Centre waiting room at Port Adelaide has been listed as a close contact exposure site for two hours on Tuesday afternoon.

Unvaccinated visitors who attended the site at the listed times have been ordered to isolate for 14 days, and vaccinated contacts for seven.