An Australian film about a man with coronavirus in home quarantine predicted the COVID-19 pandemic more than three years before the outbreak.

Independent movie Cooped Up was dubbed a ‘quirky romantic comedy’ when it was released in 2016 but it now has some chilling parallels to the health crisis.

In the film, wrestler Jake Ridge is infected with a ‘bat coronavirus’ during a trip to China and is forced to self-isolate in his childhood home in Sydney for 21 days.

During this time, he falls in love with epidemiologist Dr Emily Mundy, who visits him to check on his condition while often wearing personal protective equipment (PPE).

Coincidentally, the film’s director Kane Guglielmi is currently in lockdown with his wife and two children in Tuscany, Italy – one of the worst affected countries.

The poster for 2016 Australian movie Cooped Up, which seemingly predicted the COVID-19 pandemic as it told the story of a man who is forced into self-isolation after contracting coronavirus in China

Early in the film, Dr Mundy informs the main character Jake that he has coronavirus after returning to Sydney from a trip to China.

‘It’s similar to a bat coronavirus but we’ve also found it in bats and camels,’ she said.

The epidemiologist then shows Jake a newspaper with a headline that reads: ‘Deadly virus hits Sydney.’

Similarly, the current COVID-19 strain is believed to have originated from a bat in a Chinese wet market in the city of Wuhan before making its way to Australia.

‘You’ve been exposed to an emerging respiratory coronavirus with a known fatality rate over 90 per cent. Elevated heart rate and high temperature will be the first symptoms,’ Dr Mundy then says.

‘If you don’t have anything like this 21 days after exposure, then you’re fine.’

Likewise, people contract coronavirus are required to self-isolate at home unless their illness requires treatment at hospital. 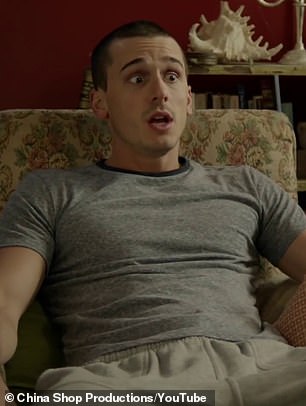 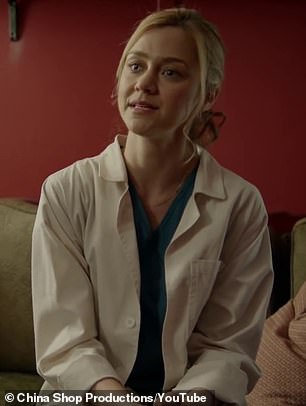 Early in the film, epidemiologist Dr Emily Mundy (right) informs wrestler Jake Ridge (left) that he has ‘bat coronavirus’ after returning to Sydney from a trip to China and that he has to self-isolate at home for 21 days 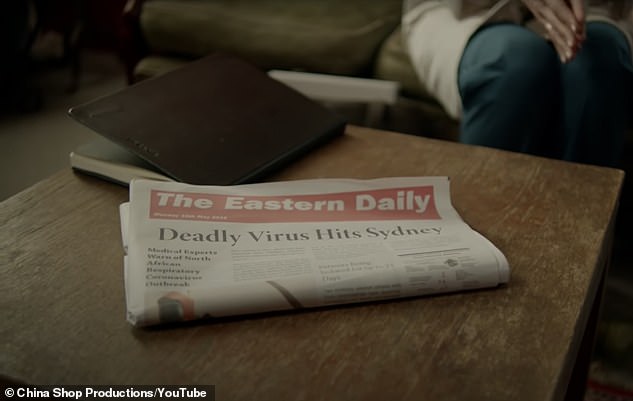 Dr Mundy then shows Jake a newspaper with a headline that reads: ‘Deadly virus hits Sydney.’

At one point, he wraps a tea towel around his mouth like a face mask and carries disinfectant spray bottles in each hand like a quarantine cowboy.

Face masks, disinfectant and hand sanitiser have all been in short supply during the current pandemic as they prevent infection.

Dr Mundy comes back to the house to check on Jake at several points in the film.

She wears a full hazmat suit, a face mask, goggles and gloves – otherwise known as PPE, which is now in incredibly high demand at hospitals across the world. 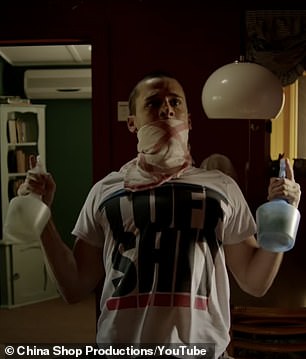 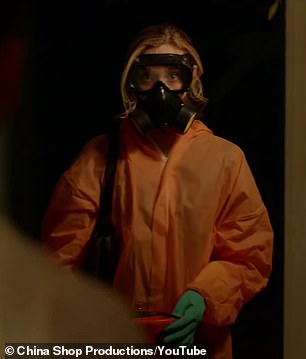 Jake dons a face mask and uses disinfectant spray in the film while Dr Mundy wears full PPE, which are all items that are currently in shortage amid the COVID-19 pandemic 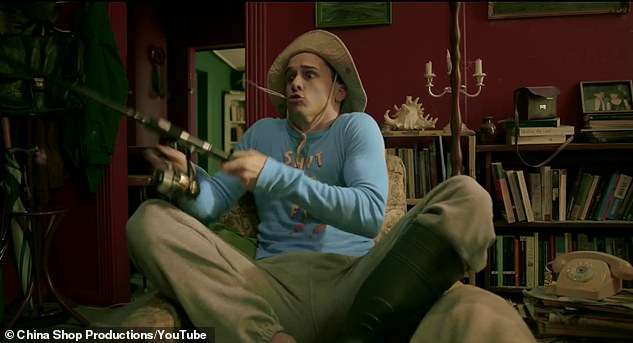 Mr Guglielmi, the film’s director, said it was ‘bizarre’ that his movie directly mirrors the current reality for millions of people around the world.

‘When the film was first released, some people had said the plot was too far-fetched. Up until six months ago I thought maybe, in some ways, it was too,’ he told 9News.

‘I myself can’t believe the parallels of the film, it is literally identical to what people are going through right now.’

He was inspired to make the film when he discovered the concept of infected people self-isolating at home, which he thought was interesting.

The director and writer John Ratchford even consulted a virologist to make the film scientifically accurate, which is why it has so many parallels to COVID-19.

The independent film maker put everything on the line to make the film, even selling his house to fund the production.

Three years later, the investment is paying off as he made deals with various international streaming services to broadcast the movie across the world. 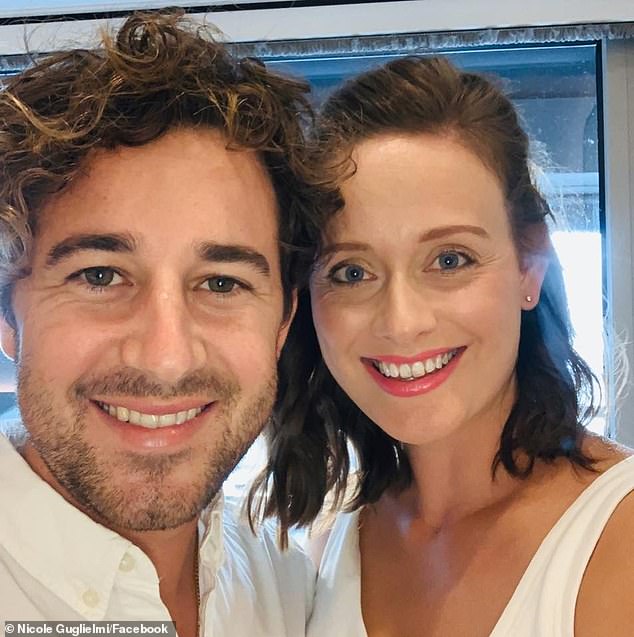 The film’s director Kane Guglielmi (left) is currently in lockdown with his wife Nicole (right) and their two children, aged two and four, in Tuscany, Italy – one of the worst affected countries

Mr Gugielmi, his wife Nicole and their two children, aged two and four, are currently  living in lockdown in Tuscany, Italy.

Cooped Up has blown up in popularity since the COVID-19 and Mr Gugielmi has been interviewed by news organisations in the US, UK, Canada and New Zealand.

The director signed a deal with Channel 10 to air the movie for Australian audiences last Friday.

But Mr Gugielmi slammed the network for removing a three-second dedication to his late brother, who died of suicide, at the start of the film.

‘I am deeply disappointed, and quite frankly disgusted to learn of the actions by this evening in the broadcast of my feature film Cooped Up,’ he wrote on Facebook.

Cooped Up is currently available to rent or buy on Vimeo and Amazon Prime Video. 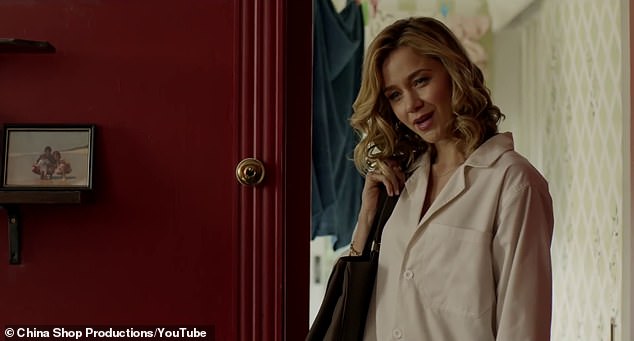 Dr Mundy pays Jake a visit in the film. The film recently aired on Channel 10 but Mr Gugielmi slammed the network for removing a three-second dedication to his late brother