King’s College London’s COVID Symptom Tracker app estimates cases have remained stable over July for the UK as a whole, but appear to be ‘creeping up’ in the north of England.

Some 1,000 people are catching the coronavirus in the North every day, an increase on the 750 estimated last week.

The rise is too small to say definitively that the outbreak is growing once again but the scientists say they are watching the situation closely.

Data also shows there are an estimated 28,048 people in the population who are currently symptomatic, down slightly from the 26,000 the week before. The figure does not include care homes.

Experts warned there is a limited window to get the virus under control in the summer months before the cold weather potentially drives cases up again.

Covid-19 cases in Britain are barely dropping with almost 2,000 people still becoming infected each day and may even be rising in the North, as seen in the graph 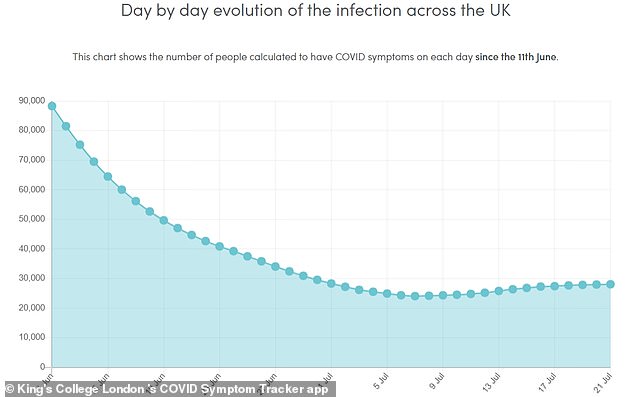 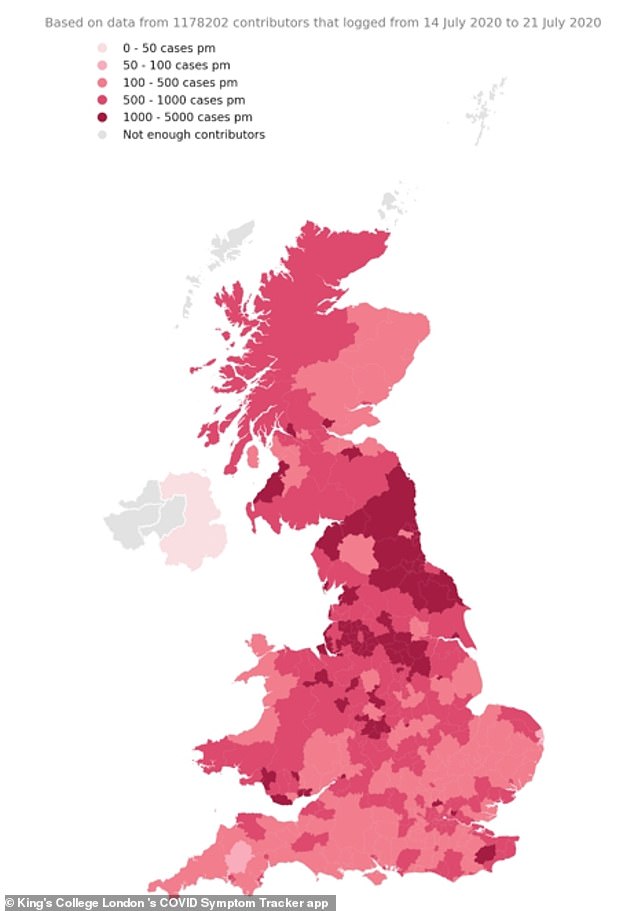 A clear North/South divide is also appearing across England, as cases have remained stable in the South but appear to be rising in the North, according to KCL

Estimates of the prevalence of the coronavirus in England are produced regularly by the team who run the COVID Symptom Tracker mobile app, at King’s College London (KCL) and the health tech firm ZOE.

The COVID-19 Symptom Study app has now been downloaded by over 3.5million people in the UK who regularly update information about if they have symptoms of have had a Covid-19 test.

Professor Tim Spector, an epidemiologist at KCL and lead researcher behind the app, said app users were reporting worse outcomes from their illness than before, which he said may be linked to the colder, less humid weather.

He said: ‘[It] makes it even more important that we get this virus under control as we only have a month or two of warm weather left.

HOW MANY CASES ARE THERE EACH DAY?

‘Our data suggests that levels have bottomed out at around 2,000 cases per day which is too many, so we all need to be conscious of the dangers and to continue to practice high levels of personal hygiene, wear a face mask, social distance and know all the signs of early disease.’

The latest figures were based on the data from 13,451 swab tests done between 5 July to 18 July.

Similar to last week, the data suggests that the number of daily new cases in the UK has remained flat.

A predicted 1,884 daily new cases of COVID in the UK on average over the two weeks up to 18 July.

It’s down slightly from the 2,100 estimate given last week, based on swabs taken between June 28 and July 11.

But in the last two weeks of June, there were only 1,400 new daily new cases up until July 4 — when ‘Super Saturday’ led to the opening of pubs, restaurants and salons.

Experts said last week the fluctuations are too small to say definitively that the outbreak is growing once again.

But they are certain cases are not dropping anymore and the epidemic has ‘definitely levelled off’.

A clear North/South divide is also appearing across England, as cases have remained stable in the South but appear to be rising in the North.

The South East is seeing around 210 new infections per day, and the South West just 136. London is experiencing some 256 new cases a day.

In the North West and North East and Yorkshire, a predicted 434 and 457  people are catching the virus every day, respectively. That’s up from the 321 and 401 estimations from the previous week.

Again, the team said the numbers of cases in regions are still so low that any uptick in figures is still not yet statistically significant. The increase in numbers could be in relation to more testing. 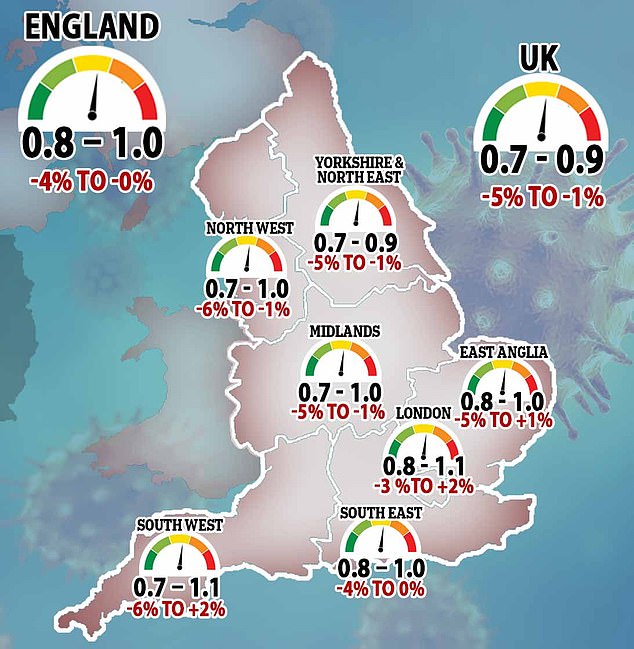 SAGE claimed last Thursday that Britain’s coronavirus outbreak is still shrinking by up to 5 per cent a day. But the scientific advisory panel warned the R rate could be above one in the South West of England and London

Professor Spector said: ‘We are now starting to see the figures in the North creep up week on week.

The researchers have created a ‘watch list’ for the first time so they can track cases more closely in the top ten concerning areas.

The figures below are the percentage of the population with symptomatic Covid-19 right now.

‘The numbers are still very small so we can’t say with 100% certainty that COVID is increasing significantly but it does make us focus on those areas.

‘To understand if these increases are significant or not, we need as many people as possible in these areas to be logging in the app.

‘So we are calling for people living in the North, to download the app and get logging, as without them, it will make spotting any real hotspots accurately much harder.’

The researchers have created a ‘watch list’ for the first time so they can track cases more closely in the top ten concerning areas — nine of which are in the North.

The authorities which have the highest estimates of symptomatic COVID in the past week include Wrexham, Rotherham, Kirklees and Blackpool.

At the top of the list is Blackburn with Darwen, where around 0.4 per cent of the population are estimated by KCL to have the virus.

Blackburn has overtaken Leicester — the first place in the UK to be hit by a local lockdown — to have the highest coronavirus infection rate in England.

The latest prevalence figures estimate that 28,048 people in the UK are currently sick with Covid-19 compared to the 26,020 people estimated last week.

KCL are one of several surveillance projects tracking the spread of the disease in Britain.

It’s most recent prevalence estimates are within the estimation bounds made by the Office for National Statistics (ONS), which said between 5,000 and 31,000 people had the virus in England between 22 June to the 5 July.

ONS, which takes swabs from thousands of random households per day, will release their update predictions later today.

WHAT ARE THE DIFFERENT ESTIMATES OF NEW DAILY INFECTIONS?

A project run by Public Health England and the University of Cambridge predicted in the first week of June that 16,700 new infections were cropping up each day.

But the Office for National Statistics, which calculates a weekly measure, suggested at the same time that only 5,570 people were catching the virus on a daily basis, on average.

And an unofficial app being run by King’s College London, based on people self-reporting their symptoms, put the estimate at 9,400 new cases each day.

Experts explained that the difference between the figures is caused by them recording different things, and recording the same things in different ways. While the PHE and Cambridge project aims to give a nationwide picture, the ONS does not include people catching the virus inside hospitals and care homes.

The app run by King’s College, meanwhile, only counts people who get symptoms – and many don’t. All the figures should be taken with a pinch of salt and used together, scientists said.

The ONS’s estimate is based on swab testing samples which it sends out to more than 25,000 people in thousands of homes across the country. It predicts only new cases in the community, not hospital patients or people who live in institutions or homes. 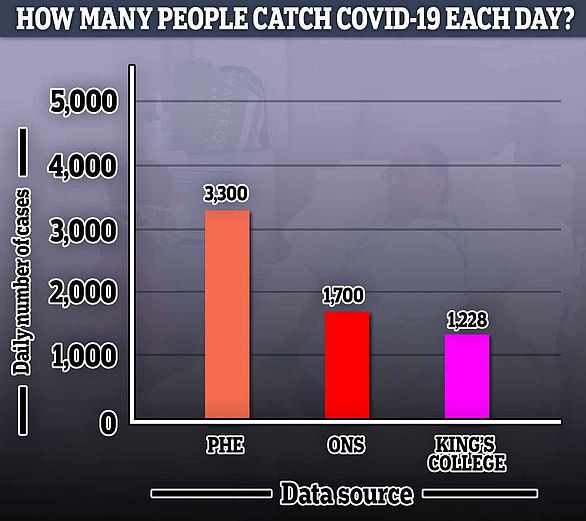 Public Health England scientists, meanwhile, have been working with the University of Cambridge to produce their rolling ‘nowcast’ of the country’s current situation. That team uses a collection of data including the numbers of people dying, antibody test results that estimate how many people have already had the virus, and data about the numbers of social interactions people are having.

A separate estimate by the King’s College London team behind the COVID Symptom Tracker mobile app collects government data and numbers from people reporting their symptoms through the free-to-use public app. This also now uses the results of thousands of test results that are reported by the users.

The ONS and King’s College app, therefore, aim to pick up almost the exact opposite groups of people. ONS home testing intends to get results from people who do not know they have the virus but testing them regularly, regardless of how they feel.