Covid-19 deaths in England and Wales spike by 55% with 215 victims last week, ONS

The number of coronavirus deaths in England and Wales has spiked for the third week in a row, official figures show.

Covid-19 was mentioned on 215 death certificates in the week that ended September 25, according to the Office for National Statistics (ONS). This marked a 55 per cent rise in the 139 deaths recorded the previous week and more than double the 99 posted a fortnight ago.

Just two of the 215 victims were under the age of 50, once again highlighting how the virus disproportionately preys on older people.

Registered deaths involving Covid-19 increased in every region of England, except the East Midlands, where the weekly total fell from 14 to 11. Deaths were highest in the North West (60).

Despite fatalities rising across the board, weekly deaths are still a fraction of what they were during the darkest days of the crisis, when there were 8,800 victims a week. And flu and pneumonia are still killing more than five times the amount of people as Covid-19, with 1,172 people passing from the respiratory illnesses in the last seven days.

Meanwhile, there are still 750 more people dying in their houses than medics would expect at this time of year, highlighting the negative knock-on effect the pandemic is having on the nation’s health.

Experts say many people are still too scared to use the NHS for fear of catching Covid-19, while others don’t want to be a burden on the health service. Hospitals are still scrambling to get services back up and running and cut down record waiting lists after months of operating at a fraction of their capacity.

The number of coronavirus deaths in England and Wales has spiked for the third week in a row, official figures show 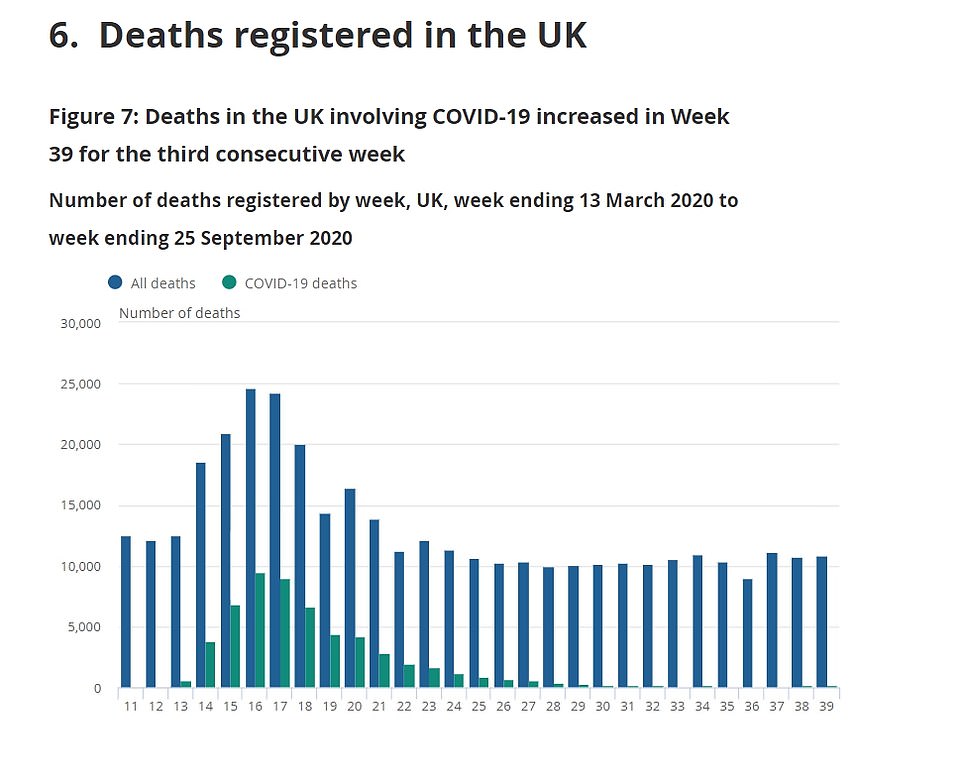 Despite fatalities rising across the board, weekly deaths are still a fraction of what they was during the darkest days of the crisis, when there were 8,800 victims a week 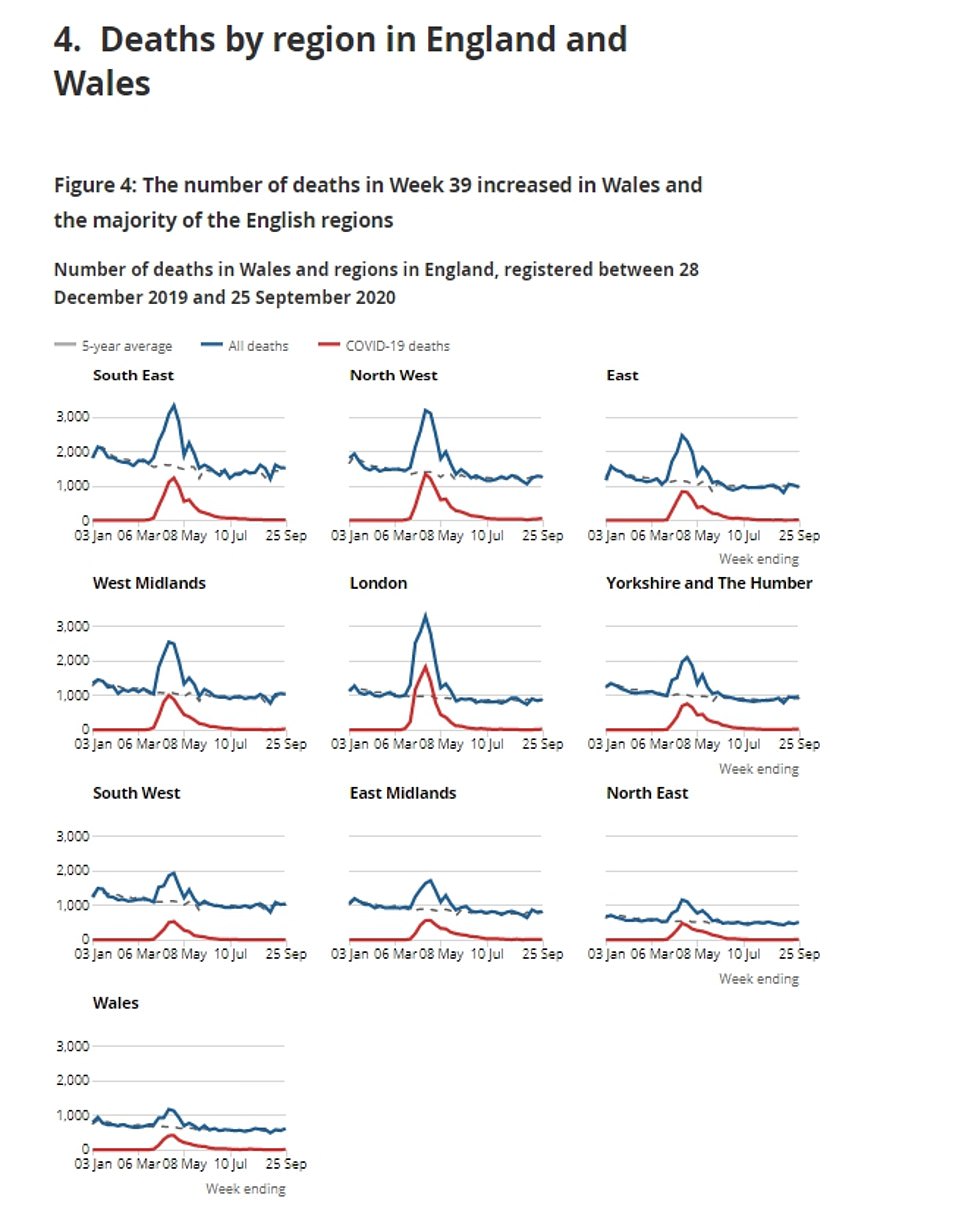 Registered deaths involving Covid-19 increased in every region of England, except the East Midlands, where the weekly total fell from 14 to 11 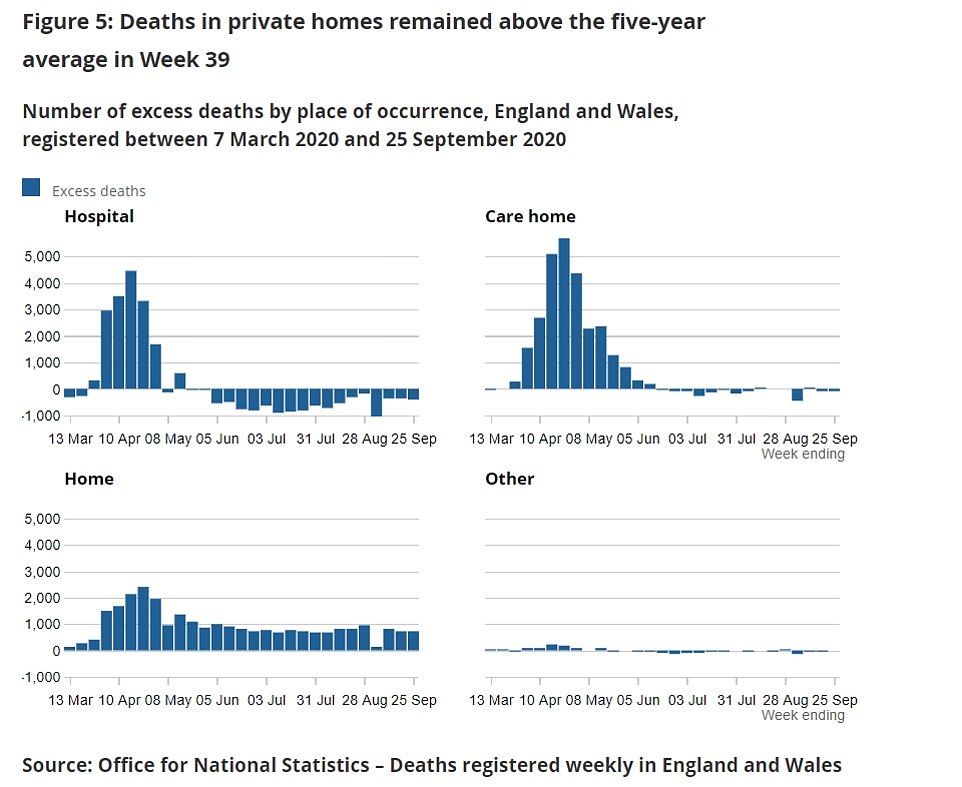 There are still 750 more people dying in their houses than medics would expect at this time of year, highlighting the negative knock-on effect the pandemic is having on the nation’s health

More than 58,000 virus-related deaths have now been registered in the UK, according to data from the statistics agencies in each of the home nations.

Data published last week by the National Records for Scotland showed that 4,257 deaths involving Covid-19 had been registered in the country up to September 27.

The number of severely ill Covid-19 patients needing to be hooked up to ventilators has more than halved since the peak of the pandemic in the spring, figures reveal.

Twenty-six per cent of intensive care patients received invasive ventilation up to 24 hours after being admitted to hospital last month.

But this figure was as high as 76 per cent when the pandemic first struck, according to data collated by the Intensive Care National Audit and Research Centre.

The data bolsters suggestions that doctors are getting better at treating the disease, with scientific breakthroughs boosting the survival odds of patients.

Medics can now use drugs such as dexamethasone — a steroid that cuts the risk of death in the most critically-ill by up to a third, and remdesivir — which can speed up recovery.

It means they are no longer having to rely on ventilators to treat every severely-ill patient, experts say.

Survival rates after entering critical care also appear to be improving, official data shows, although the final outcome for many patients is yet to be revealed.

But 66 per cent of the 211 patients admitted to hospital last month for whom data was provided remained in intensive care or in hospital when the data was gathered for the report.

And 901 deaths occurred in Northern Ireland before September 25, according to the province’s Statistics and Research Agency.

This estimate is higher than the Department of Health’s official tally, which has recorded little over 43,000 deaths, because the ONS includes people who were suspected of having the virus but were never diagnosed.

The 215 Covid-19 deaths this week accounted for 2.2 per cent of all 9,634 deaths registered in the week ending September 25 in England and Wales, the ONS said.

Deaths from all causes are 2.7 per cent above the five-year average, which experts say is caused by the knock-on effect of the pandemic on healthcare.

Hospitals are struggling to get through the slog of patients waiting for ops because they shut down all non-emergency treatment for months during the crisis.

They are still only running at a fraction of their usual capacity and are being hindered by new social distancing measures.

There are currently four million people on waiting lists for elective surgery but NHS bosses expect that number to grow to a record 10million by the end of the year.

Just two areas – London and the East – had lower overall deaths than the average over five years for this time of year.

This statistic is being driven up largely by a huge increase in people dying at home, with 749 more fatalities in private houses than would typically be expected.

The number of excess deaths at home, which were not linked to Covid-19, since the start of the pandemic has passed 25,000.

There were 25,183 non-Covid excess deaths in homes in England and Wales registered between March 7 and September 25, the ONS said.

Excess deaths are the number of deaths that are above the average for the corresponding period in the previous five years.

But care homes and hospitals are still recording fewer deaths than they normally would at this time of year.

ONS experts explained that Covid-19 likely sped up the deaths of people who would have died of other causes, meaning the year’s fatalities have been front-loaded.

Eminent statistician Sir David Spiegelhalter, from the University of Cambridge, said: ‘The latest data confirms that Covid deaths in the UK were doubling around every two weeks in September, although still only comprised 2 per cent of deaths in the country.

‘Crucially, there is still absolutely no sign of any reduction in the 30 per cent increase in deaths occurring at home – if this is to be a long-term feature of deaths in this country, we need to be confident that appropriate end-of-life care is being made available.’