Covid-19 has killed THREE TIMES as many people as flu and pneumonia this year, official figures show

Coronavirus has killed three times as many people as influenza and pneumonia this year, official data reveals, as Donald Trump claims the infection is ‘less lethal’ than the common flu.

Covid-19 was listed as the underlying cause of death in 48,168 fatalities between January and August this year, according to the Office for National Statistics (ONS), while influenza caused just 394 deaths in the same time period, and pneumonia – often caused by the flu – was behind 13,619 deaths.

The daily number of fatalities from the coronavirus remained above those from the common diseases in England and Wales from March, when the pandemic struck, until July, when the virus began to fade away. The latest figures from the ONS, for August 31, show 14 deaths were caused by influenza and pneumonia while five were linked to coronavirus.

Mortality rates for the virus were ‘significantly higher’ for all age groups than those for influenza and pneumonia, according to statisticians. Those aged 85 and older were found to be at highest risk, with a fatality rate of 1,243.9 per 100,000 compared to 862.5 per 100,000 from pneumonia and influenza.

Deaths from pneumonia and influenza were seven times below their five-year average, which shows 97,674 fatalities where the diseases are listed as the underlying cause are expected each year. Experts say this is because lockdown curbs to stop the spread of coronavirus have also hampered the transmission of other diseases.

Pneumonia and influenza were counted together because many cases of pneumonia are in fact caused by influenza, the ONS said.

Sarah Caul, head of mortality analysis at the ONS, said: ‘The mortality rate for COVID-19 is also significantly higher than influenza and pneumonia rates for both 2020 and the five-year average.

‘Since 1959, which is when ONS monthly death records began, the number of deaths due to influenza and pneumonia in the first eight months of every year have been lower than the number of COVID-19 deaths seen, so far, in 2020.’ 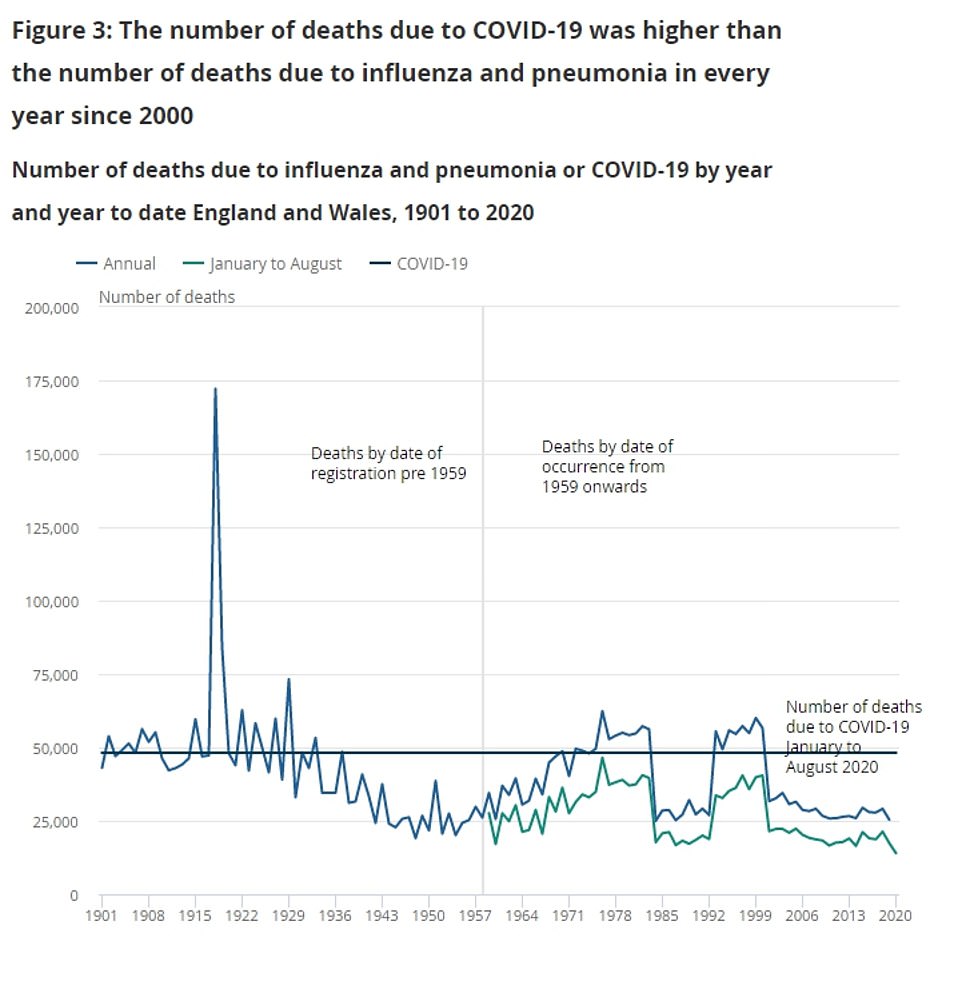 This graph shows the total number of deaths annually (blue line) and those from pneumonia and influenza (green line). The number of deaths due to Covid-19 has been estimated based on available data and compared to previous years. It is represented by the black line running across the graph 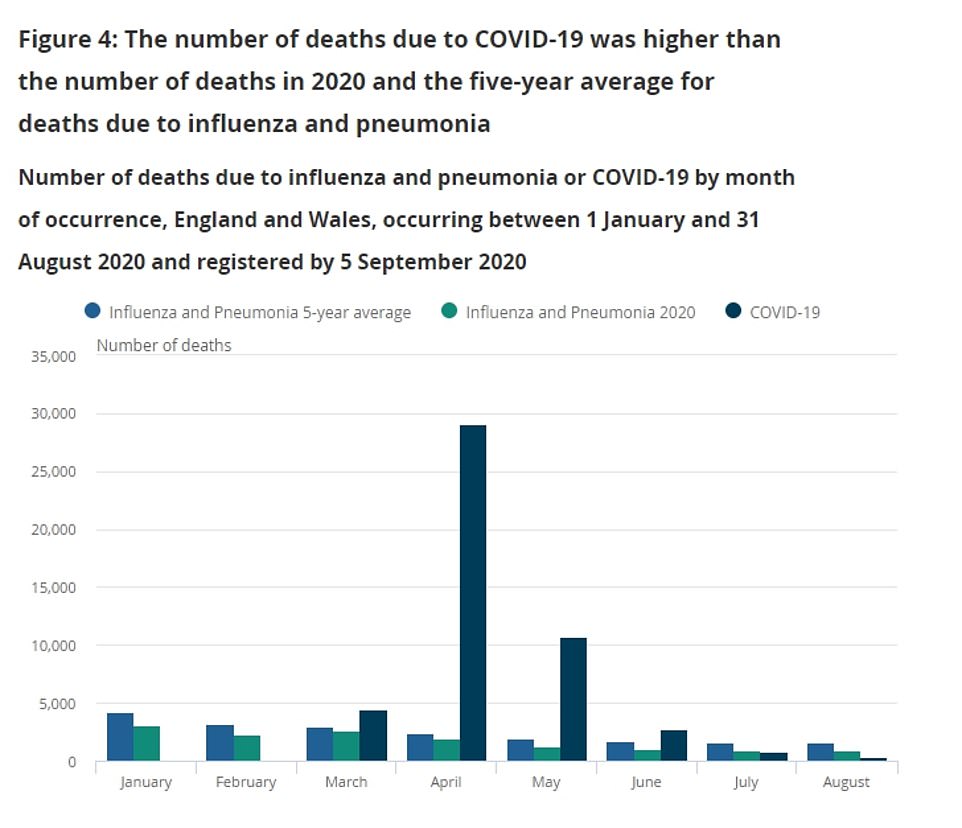 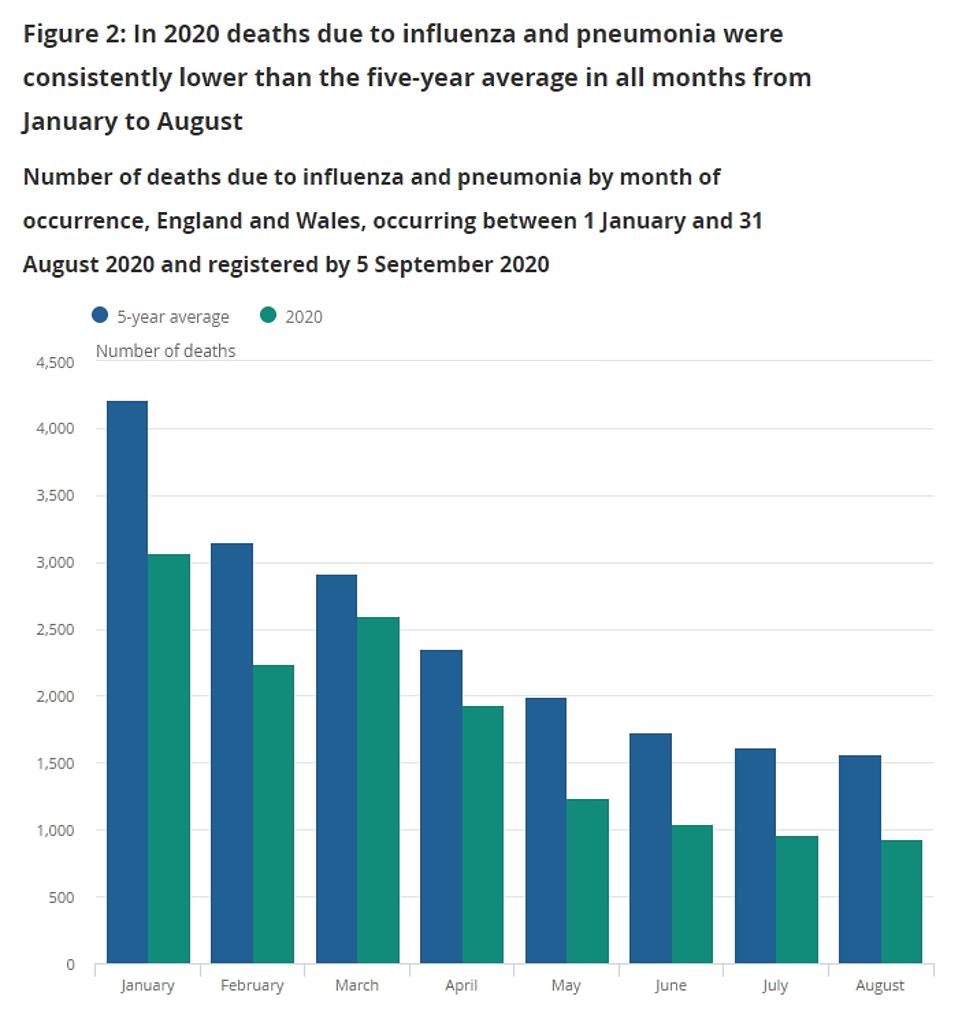 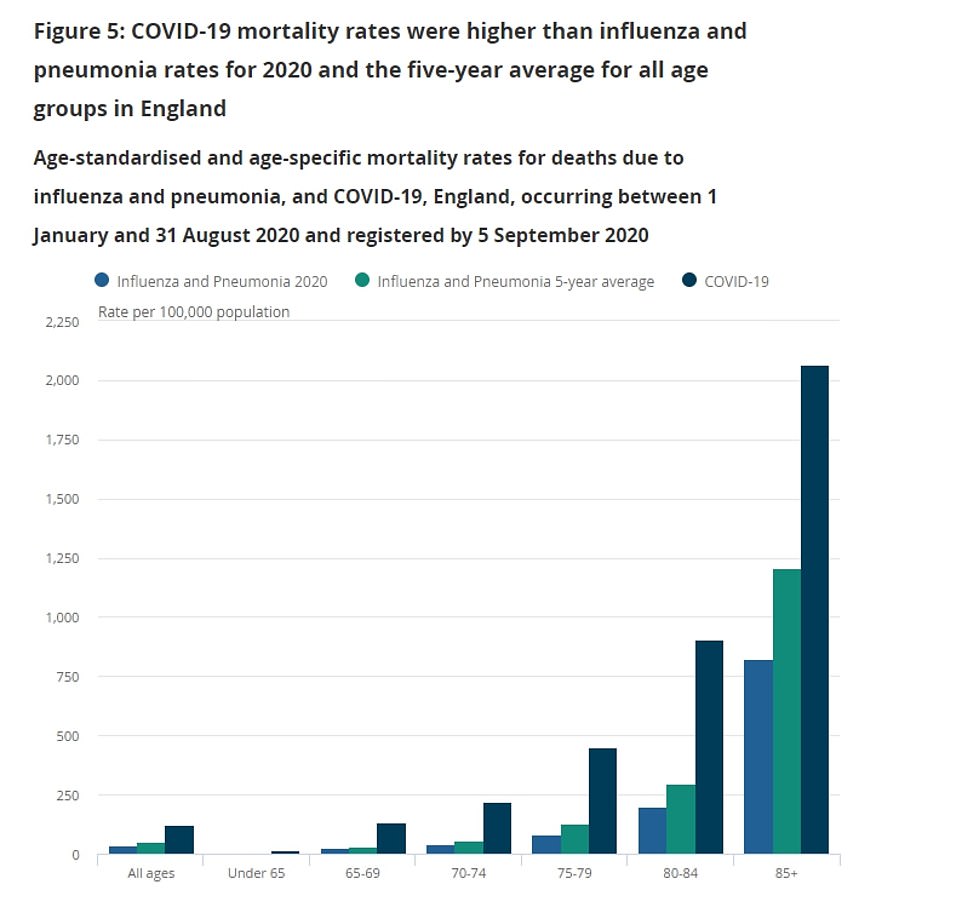