The chance of surviving coronavirus after falling critically ill has risen significantly since the start of the pandemic, research suggests.

Analysis by the University of Bristol shows the proportion of patients dying from Covid-19 in ICU has plummeted by a third since March.

Scientists reviewed more than 20 studies from around the world which involved  10,000 volunteers in total to come to the conclusion.

They believe the finding shows doctors are getting better at treating the disease, which is still poorly understood after jumping from animals to humans just last year.

It is hoped that survival rates will improve further still after the cheap steroid dexamethasone became the first drug scientifically proven to treat severe Covid.

The anti-inflammatory was found to reduce the risk of death in patients on ventilation by as much as 35 per cent and patients on oxygen by a fifth.

A small number of scientists believe the virus is actually weakening and patients are now surviving infections that would have killed them before.

Viruses are known to change over time because they are subject to random genetic mutations as the infection tries to gain an evolutionary advantage.

If a virus becomes less dangerous to its host – that is, it causes fewer symptoms or less death – it may find that it is able to live longer and reproduce more.

The family of viruses which cause the common cold are one example of infections that have weakened over thousands of years. But there is no concrete evidence this is happening with Covid-19 yet.

Covid-19 intensive care mortality rates have fallen by a THIRD since the start of pandemic, analysis suggests (stock photo)

ICU mortality did not differ significantly across continents despite some variations in admission criteria and treatments delivered.

The risk of dying from coronavirus after being hospitalised has plummeted since the peak of the outbreak, adding more fuel to the theory doctors are getting better at treating it.

Analysis by Oxford University shows that 6 per cent of people admitted to hospitals in England with the virus died at the beginning of April.

But the figures show by June 15, just 1.5 per cent of Covid-19 patients were dying of the disease – a quarter of the level at the peak of the crisis.

Oxford statisticians can’t pin down exactly why survival rates have fallen so much – but they believe doctors may be becoming better at treating the virus.

In April there was no approved medicine to treat Covid-19, a disease still shrouded in mystery after jumping from animals to humans at the end of 2019.

But now the NHS now has two drugs at its disposal to treat critically-ill patients – the Ebola medicine remdesivir and anti-inflammatory steroid dexamethasone.

There is probably also be fewer people catching the coronavirus in hospital than at the peak of the crisis, which may have contributed to the fall in death rates.

The researchers point out that there were no drugs scientifically proven to treat the disease at the time of the studies.

So the findings suggest that doctors have become better at gauging when to ventilate patients and how to ease their symptoms with painkillers and antibiotics.

But now doctors have two drugs in their arsenal to treat critically-ill patients – the Ebola medicine remdesivir and anti-inflammatory steroid dexamethasone.

Dexamethasone, a £5 steroid that has existed for decades, was the first drug proven to reduce the death rate among hospitalised patients needing oxygen.

The evidence around remdesivir is more mixed but studies have shown it helps the most critically ill people who need ventilation.

Lead author Tim Cook, an NHS consultant professor in anaesthesia at the University of Bristol, said he expects mortality rates to improve further thanks to the drugs.

He wrote in the study: ‘This systematic review and meta-analysis of ICU outcome in patients with COVID-19 found an in-ICU mortality rate of 41.6 per cent across international studies.

‘There were no significant effects of geographical location, but reported ICU mortality fell over time.

‘Optimistically, as the pandemic progresses, we may be coping better with COVID-19.’

It comes after analysis by Oxford University found death rates for patients hospitalised with the virus have plummeted since the peak of the outbreak.

Six per cent of people admitted to hospitals in England with the virus died at the beginning of April.

But figures show by June 15, just 1.5 per cent of Covid-19 patients were dying of the disease – a quarter of the level at the peak of the crisis.

There is probably also fewer people catching the coronavirus in hospital than at the peak of the crisis, which may have contributed to the fall in death rates.

While most scientists believe the drop in deaths is due to doctors gaining a better understanding of how to treat the virus, some believe Covid-19 has weakened since it first emerged in Wuhan last December. 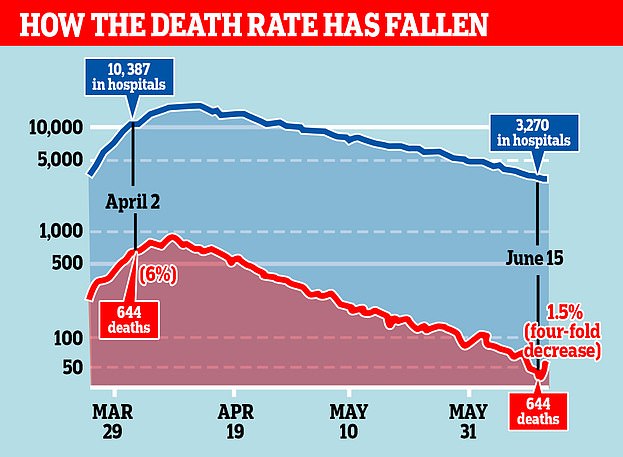 Analysis by Oxford University shows that 6 per cent of people admitted to hospitals in England with the virus died at the beginning of April. But the figures show that by June 15, just 1.5 per cent of Covid-19 patients were falling victim to the disease – a quarter of the level at the peak

Top Italian doctor Professor Matteo Bassetti said he is convinced the virus is ‘changing in severity’ and patients are now surviving infections that would have killed them before.

And if the virus’s weakening is true, Covid-19 could even disappear without a for a vaccine by becoming so weak it dies out on its own, he claimed.

He has said multiple times in recent months that patients with Covid-19 seem to be faring much better than they were at the start of the epidemic in Italy.

Professor Bassetti suggests this could be because of a genetic mutation in the virus making it less lethal, because of improved treatments, or because people are not getting infected with such large doses because of social distancing.

But other scientists have hit back at the claims in the past and said there is no scientific evidence that the virus has changed at all.

Professor Bassetti, the chief of infectious diseases at San Martino General Hospital in Genoa, Italy, told The Sunday Telegraph earlier this month the virus could wither away on its own. 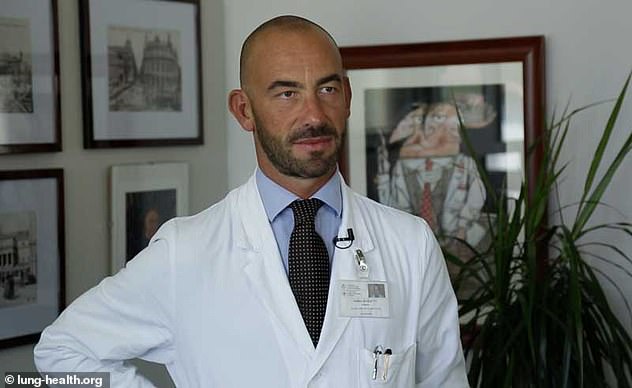 Professor Matteo Bassetti, the chief of infectious diseases at San Martino General Hospital in Genoa, Italy, said the virus has changed since March and April

He said: ‘It was like an aggressive tiger in March and April but now it’s like a wild cat. Even elderly patients, aged 80 or 90, are now sitting up n bed and they are breathing without help. The same patients would have died in two or three days before.’

Italy was one of the worst hit countries in the world during the pandemic’s early stages, and has now recorded more than 238,000 positive cases and 34,000 deaths.

Scientists have said the elderly population there, the virus spreading in rural areas and the suddenness of the outbreak contributed to the country’s high death toll.

HOW AND WHY CAN VIRUSES LOSE POTENCY OVER TIME?

Viruses are known to change over time because they are subject to random genetic mutations in the same way that all living things are.

These mutations can have various effects and many will only happen briefly and not become a permanent change as newer generations of viruses replace the mutated ones.

However, some of the mutations might turn out to be advantageous to the virus, and get carried forward into future generations.

For example, if a virus becomes less dangerous to its host – that is, it causes fewer symptoms or less death – it may find that it is able to live longer and reproduce more.

As a result, more of these less dangerous viruses are produced and they may go on to spread more effectively than the more dangerous versions, which could be stamped out by medication because more people realise they are ill, for example.

The mutation may then be taken forward in the stronger generations and become the dominant version of the virus.

In an explanation of an scientific study about HIV, the NHS said in 2014: ‘The optimal evolutionary strategy for a virus is to be infectious (so it creates more copies of itself) but non-lethal (so its host population doesn’t die out).

‘The “poster boy” for successful long-living viruses is, arguably, the family of viruses that cause the, which has existed for thousands of years.’

Professor Bassetti suggests that one of the reasons the virus might be causing less serious illness is a genetic mutation which has made it less damaging to people’s lungs.

Or, he said, people may simply be receiving smaller amounts when they get infected, because of social distancing and lockdown rules, making them less sick.

This theory depends on the severity of someone’s illness being affected by their ‘viral load’ – the amount of virus that gets into someone’s body when they’re first struck by it.

Professor Bassetti said: ‘The clinical impression I have is that the virus is changing in severity.

‘In March and early April the patterns were completely different. People were coming to the emergency department with a very difficult to manage illness and they needed oxygen and ventilation, some developed pneumonia.

‘Now, in the past four weeks, the picture has completely changed in terms of of patterns.

‘There could be a lower viral load in the respiratory tract, probably due to a genetic mutation in the virus which has not yet been demonstrated scientifically.’

The infectious disease doctor has made similar claims in the past but sparked criticism for being over-optimistic.

He said at the beginning of June: ‘The strength the virus had two months ago is not the same strength it has today.’

But other scientists did not welcome the idea and said there was no evidence to back up Professor Bassetti’s claims.

Dr Gideon Meyerowitz-Katz, from the University of Wollongong in Australia, told MailOnline that the idea the virus has disappeared ‘seems dubious’.

The epidemiologist warned Italy – which was the centre of Europe’s coronavirus crisis in March – was still recording new Covid-19 cases and deaths, showing the virus was still a danger.

At the start of June, in response to Professor Bassetti’s claim, Dr Angela Rasmussen, from Columbia University, tweeted: ‘There is no evidence that the virus is losing potency anywhere.’

The virulence of a virus is how dangerous the illness is but may not directly relate to how contagious it is.

Dr Seema Yasmin, an epidemiologist from Stanford University, said the idea was ‘bulls***’.

Dr Oscar MacLean, of the University of Glasgow, added: ‘These claims are not supported by anything in the scientific literature, and also seem fairly implausible on genetic grounds.

‘The vast majority of SARS-CoV-2 mutations are extremely rare, and so whilst some infections may be attenuated by certain mutations, they are highly unlikely to be common enough to alter the nature of the virus at a national or global level…

‘Making these claims on the basis of anecdotal observations from swab tests is dangerous.

‘Whilst weakening of the virus through mutations is theoretically possible, it is not something we should expect, and any claims of this nature would need to be verified in a more systematic way.

‘Without significantly stronger evidence, no one should unnecessarily downplay the danger this highly virulent virus poses, and risk the ongoing society-wide response.’