Covid-19 pandemic is ‘getting worse’ as number of cases has DOUBLED to nearly 12million in just six weeks, warns World Health Organization boss

The World Health Organization has warned the coronavirus pandemic has still not reached its peak – as lockdown measures are relaxed to make international travel easier.

Dr Tedros Adhanom Ghebreyesus, director general of the UN agency, said the virus is not under control ‘in most of the world’ and is ‘getting worse’.

He revealed the total number of cases of coronavirus worldwide has doubled in the last six weeks, with almost 12million confirmed infections since the pandemic first began in China back in December.

The pandemic – which has seen 550,000 people die worldwide – is being driven by outbreaks in the US, Brazil and India.

His stark message comes as quarantine rules for people returning to or visiting the UK from certain countries are relaxed from today. The UK Government has published a list of 76 countries and territories from which people arriving into England will no longer need to self-isolate for 14 days.

Revealed: How the number of cases confirmed each day has risen since the start of the Covid-19 pandemic in December 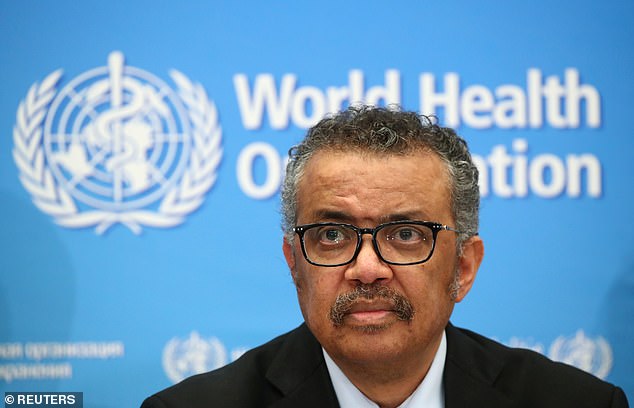 The director general of the WHO, Dr Tedros Adhanom Ghebreyesus, said the virus is not under control ‘in most of the world’ and is in fact ‘getting worse’

WHICH 10 COUNTRIES ARE RECORDING THE MOST CASES EACH DAY?

Figures are from the World Health Organization’s situation report for July 9.

Speaking at the member state briefing on the Covid-19 pandemic evaluation, Dr Tedros said: ‘The virus has upended health systems in some of the world’s wealthiest nations, while some countries that have mounted a successful response have been of modest means.

‘We know that when countries take a comprehensive approach based on fundamental public health measures – such as find, isolate, test and treat cases, and trace and quarantine contacts – the outbreak can be brought under control.

‘But in most of the world the virus is not under control. It is getting worse.

‘And the pandemic is still accelerating. The total number of cases has doubled in the last six weeks.’

The relaxation of the quarantine rules has largely been welcomed by political figures and the tourism industry, although Labour has criticised the Government for failing to set up so-called air bridges to other countries.

Shadow transport secretary Jim McMahon said that workers and holidaymakers were paying the price of the Government’s failure to act.

He added: ‘The fact they have been unable to negotiate air bridges is an indictment of their failure to tackle the crisis at home.’

Meanwhile, UK holidaymakers are being urged by the Government to avoid travelling on cruise ships.

The Foreign and Commonwealth Office (FCO) issued a statement on Thursday advising people not to embark on sailings due to the pandemic.

This comes after the blanket advice against all non-essential foreign travel was lifted for dozens of destinations on Saturday.

The FCO pledged to ‘continue to review’ its position on cruises, which is ‘based on medical advice’ from Public Health England.

For people choosing to shun holidays to stay at home in England, swimming pools, gyms and outdoor arts performances were given the green light to reopen in the latest easing of the lockdown.

Culture Secretary Oliver Dowden said outdoor pools will be able to reopen from Saturday to be followed by indoor pools, gyms and other sports facilities from July 25.

Theatres, opera, dance and music will also be able to resume outdoors from the weekend although audience numbers will be restricted and will be subject to social-distancing rules.

Following the opening for hairdressers last week, beauticians, tattooists, spas, tanning salons and other close contact services will be able to welcome back customers from Monday.

Meanwhile in Scotland, Nicola Sturgeon announced a relaxation of the rules allowing people to mix indoors and confirming plans for bars, restaurants and hairdressers to reopen.

The First Minister said it is ‘undoubtedly a time for cautious hope and optimism’ as she moved the country to phase three of its four-phase easing plan.