Britons who feel unwell have been urged to avoid seeing their elderly relatives and wear face masks again due to Covid’s resurgence.

The number of virus-infected patients in hospital has hit a two-month high, piling even more pressure on an already-crippled NHS.

Experts fear the situation will continue to spiral in the coming weeks, as the wave picks up pace.

Some hospitals have already brought back face mask requirements due to the uptick. Others have even reimposed social distancing guidelines, in scenes reminiscent of the earliest days of the pandemic.

Dr Susan Hopkins, chief medical advisor at the UK Health Security Agency (UKHSA), said anyone with a cold-like illness should wear a face covering in public.

She added: ‘If you are unwell, it is particularly important to avoid contact with elderly people or those who are more likely to have severe disease because of their ongoing health conditions.’

Despite Covid fears starting to mount once again, ministers have made no hint that any return of pandemic-era curbs are on the horizon as yet.

Prime Minister Liz Truss labelled previous restrictions during the pandemic as ‘too much’ and ruled out ever bringing in another lockdown.

NHS England’s most up-to-date data shows there were 9,631 infected people needing hospital treatment as of Wednesday.

This was up 37 per cent from the 7,024 logged just a week earlier and represents the highest figure since August 3.

UKHSA surveillance data shows cases appear to be highest in over-80s at the moment.

However, confirmed cases rely on people taking tests and old people living in care homes are more likely to have regular swabs. 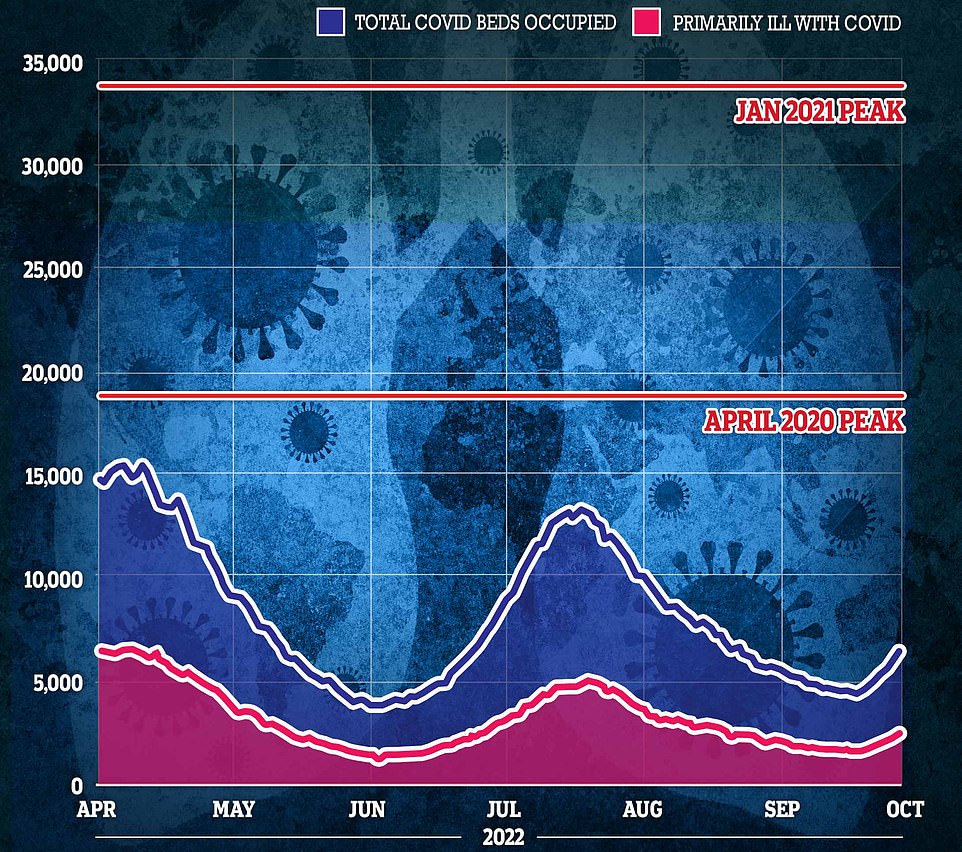 A total of 9,631 people with coronavirus were in hospital as of 8am on October 5, according to NHS England. This is up 37 per cent from 7,024 a week earlier and is the highest figure since August 3. Graph shows: Number of Covid patients in hospital (blue line) compared to number there primarily because of the virus (red line) 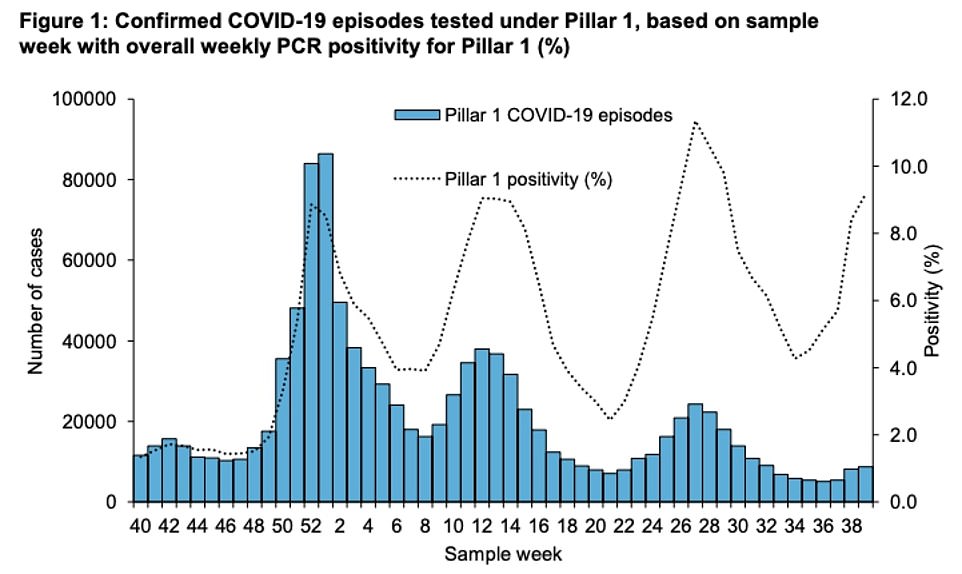 The number of tests coming back positive was 9.2 per 100,000, a 10 per cent increase compared to the previous week. Graph shows: Number of confirmed cases (blue bars) and test positivity (dotted line) each week up to October 2 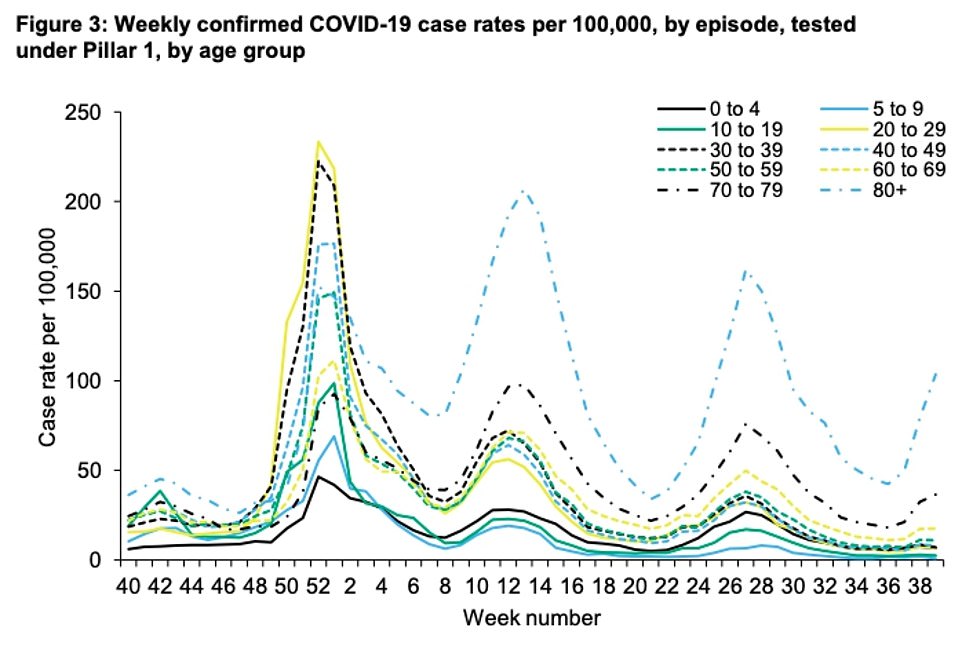 Confirmed cases were highest in the most vulnerable over-80 age group. However, confirmed cases rely on people taking tests, with older people living in care homes more likely to have regular swabs. They were lowest in those aged 10 to 19 and five to nine, despite the return to schools last month. Graph shows: Confirmed Covid cases per age group in England each week up to October 2 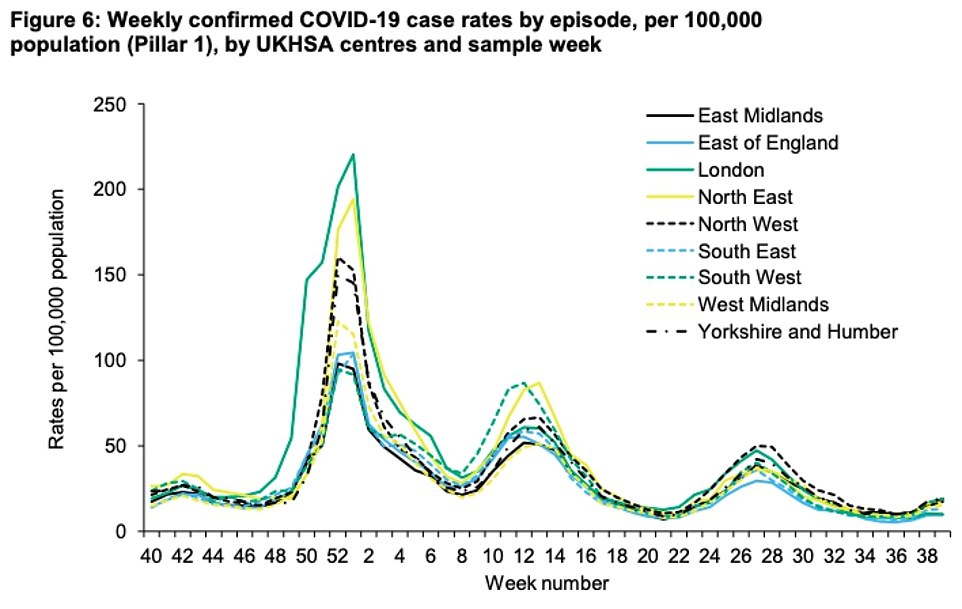 Graph shows: The number of confirmed Covid cases each week in England in the weeks up to October 2 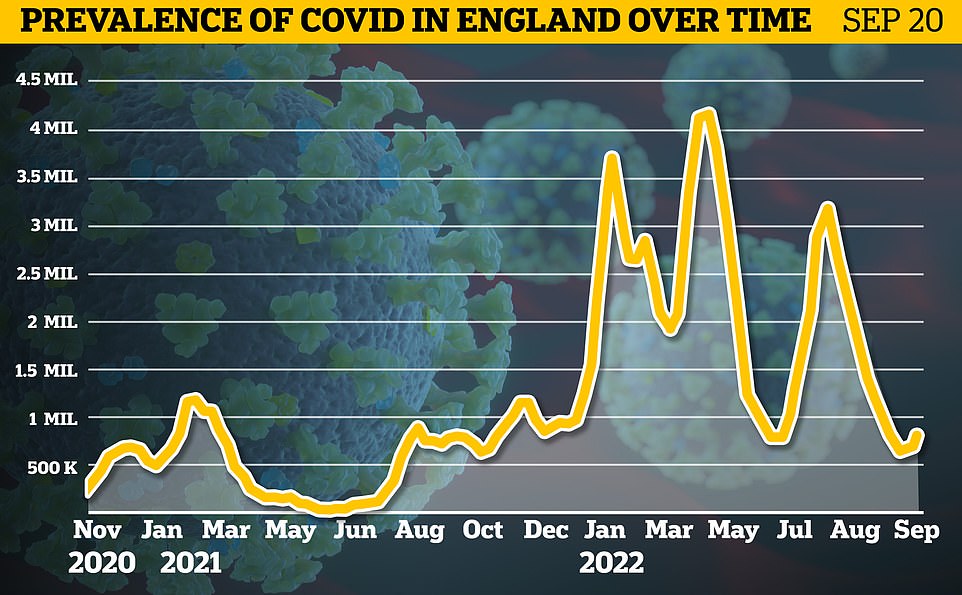 Latest data from the Office for National Statistics shows Covid infections in England jumped by more than a tenth to 857,400 in the week to September 20

The number of hospital beds in England occupied by Covid-infected patients has climbed to its highest level for two months, in another sign of the virus’s resurgence.

NHS England’s most up-to-date data shows there were 9,631 infected people needing treatment as of yesterday.  This was up 37 per cent from the 7,024 logged just a week earlier and represents the highest figure since August 3.

However, experts have argued the jump is mainly being driven by so-called ‘incidental’ cases, where patients are admitted for another illness — such as a broken leg or a heart attack — and later test positive.

Patient numbers topped 14,000 in mid-July at the peak of the wave of infections caused by the Omicron BA.4 and BA.5 subvariants of the virus.

They had been falling steadily until mid-September but have since started to creep up again, prompting some to declare it the start of the inevitable winter wave.

Dr Hopkins said: ‘This week’s data shows concerning further increases in Covid cases and hospitalisation rates, which are now at their highest level in months.

‘Outbreaks in hospitals and care homes are also on the rise.

‘Make sure you have any Covid vaccinations you are eligible for and avoid contact with others if you feel unwell or have symptoms of a respiratory infection.

‘If you have symptoms of a respiratory infection, wearing a face covering will also help stop infections spreading.’

Despite the rise in hospital admissions, just four in 10 of Covid patients were primarily admitted because they were unwell with the virus.

The majority are those who tested positive for the virus but are receiving NHS care for another ailment, such as a broken leg.

Some experts have dismissed fear-mongering over the recent spike in cases, arguing the current wave was inevitable due to waning immunity among the population, increased indoor mixing in the colder months and a surge in cases among pupils after they returned to classrooms last month.

Coronavirus hospital data is currently published once a week on a Thursday.

The latest figures show all regions are recording a steady rise in patients, with three regions back to levels last seen in late July.

South West England currently has 1,003 patients who have tested positive for Covid, not far below its peak during the BA.4/BA.5 wave of 1,229.

All numbers remain well below those reached during the early waves of the pandemic, however.

Although two-thirds of Covid patients in hospital are being treated primarily for something else, they still need to be isolated — putting extra pressure on staff already struggling to clear a record backlog of treatment.

Experts claimed the high proportion of incidentals is caused by transmission in hospitals and generally increasing Covid cases in the community.

Sites in East Suffolk, Essex and Gloucestershire now require all visitors to wear coverings when in their hospitals. Some are also telling patients to wear masks and reimposing social distancing guidelines, in scenes reminiscent of the earliest days of the pandemic

Graph shows: Total number of patients in hospital who have Covid in England each day up to September 26

Graph shows: Total number of Covid patients admitted to hospital in England each day up to September 26

Graph shows: Total number of Covid patients on ventilation beds in hospitals in England each day up to September 26

Professor Christina Pagel, a mathematician at University College London and member of Independent Sage, said on Twitter : ‘Hospital admissions continuing to go up in England — 33 per cent increase over last week. Daily admissions back well over 1,000 a day.

‘Rising in all regions but fastest in East of England, North East & South East. South West remains high and London lowest by far. Not sure why.

‘Both admissions directly because of Covid and where Covid is secondary issue are rising fast, but incidental admissions more so.

‘A sign of fast community spread and high in hospital transmission.’

Boris Johnson’s Government lifted all remaining pandemic curbs in spring, as the success of vaccine rollouts and high immunity in the population meant the UK could ‘learn to live with Covid and end Government regulation’.

The former Prime Minister noted that the Government may reimpose measures if a new variant emerged that placed ‘unsustainable pressure’ on the NHS.

However, the UK has remained restriction-free since then, despite two more Covid peaks, and new PM Liz Truss has said she would not bring in a lockdown.

She labelled the restrictions brought in under Mr Johnson — including three shutdowns, school closures and work from home measures — as ‘draconian’ and said the Government ‘did too much’.

In previous lockdowns, the threat of unsustainable pressure on the NHS was the key metric used to decide whether the restriction was required.