It comes after NSW residents were told they must upload their positive Covid test results using the Service NSW app.

The 78,000 new cases are a backlog of 12 days worth of tests with residents asked to log every positive RAT dating back to January 1.

About 14,000 people logged a test when the online registration opened at 9am on Wednesday, with the results to be included in Friday’s case numbers.

Customer Service Minister Victor Dominello said this figure had exploded to more than 82,000 registered tests by the end of the day.

Premier Dominic Perrottet has flagged huge fines of $1,000 for those who don’t report positive results – despite admitting it will be ‘almost impossible’ to enforce. 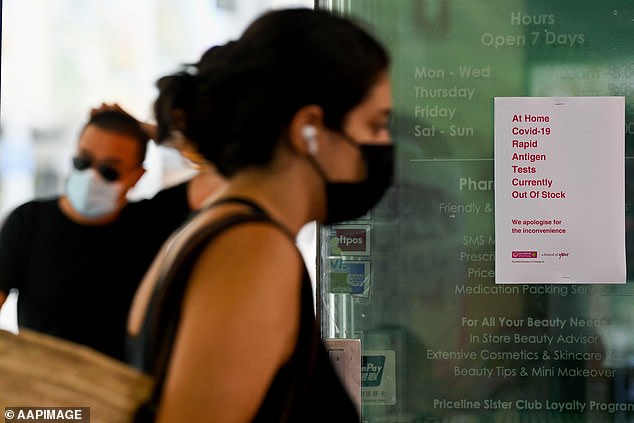 The 78,000 new cases are a backlog of 12 days worth of tests, with residents asked to log their positive RAT from back to January 1 (pictured, sold out RATS at a Sydney chemist)

The premier on Thursday admitted the state government would have to rely on people following the rules and registering their positive tests.

‘Yes, we will rely on the public as we have done for the last two years to get us through this.

‘But I’ve got no doubt when you look at the vaccination rates and all the other things that we have asked the public to do … they have always stood up to the mark.’

Residents over the age of 16 a grace period of up to January 19 to log any positive rapid antigen tests they have had this year or risk being slapped with a hefty fine.

Mr Perrottet said while it would be difficult to police there were practical benefits for uploading tests, for financial grants or accessing healthcare quicker.

‘There may be grants in the future, for example, if you need to get financial assistance in the federal government, hypothetically and they need to say, well, show us that you had Covid,’ he said.

He said PCR tests will continue to be used alongside rapid tests amid the surge in cases as the state transitions to a testing program based on the at-home testing kits. 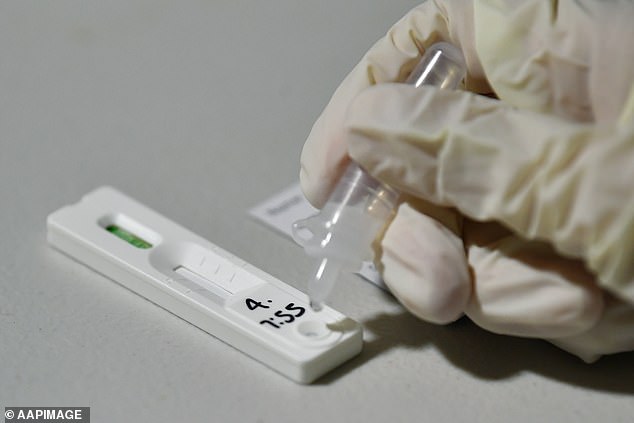 Customer Service Minister Victor Dominello said more 82,000 tests had been registered by the end of the day on Wednesday (pictured, a RAT test) 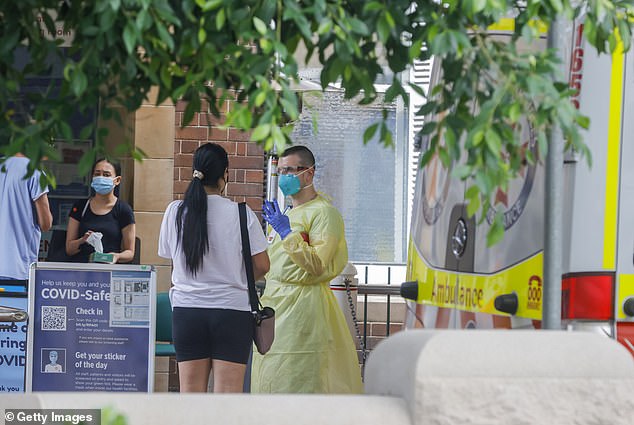 The premier on Thursday admitted the state government would have to rely on people following the rules and registering their positive tests (pictured, a Sydney hospital)

‘We just want to send the message out that this is really important,’ he said.

‘Because ultimately it’s about connecting people with health care and if you register that you’ve got a positive test and you are one of those people that are at higher risk, we can then get help to you faster.’

Health officials have said tracking rapid tests will give a clearer idea of the infection rate and provide those sick with the proper advice or care.

The premier said NSW was following the ACT, South Australia, Tasmania, Queensland and the Northern Territory in introducing a penalty for not registering tests.

The state has ordered 100million of the self-test kits due to arrive throughout January to be used for public workers, schools and vulnerable communities.

However, the new plan has come under fire by many who have criticised how authorities will regulate whether people will upload their positive results.

Chris Rudge, an expert in health law and medical regulation from the University of Sydney, labelled the new system as ‘very unenforceable’.

‘I can’t think of many legal instruments that are more unenforceable than this,’ Dr Rudge told AAP.

‘It inevitably will be either very selective or very patchy, there’s no uniformity or equity of oversight here.’

He said two groups in particular are likely to be in the sights of authorities – people hospitalised with Covid-19, and those living in a ‘group setting’.

That is because Covid-19 positive patients in hospital could easily be questioned about whether they had reported a positive RAT test, while those in share houses or living with family could be ‘dobbed in’ by housemates.

It comes after NSW detected a record 34,759 new cases and 21 deaths on Wednesday, making it one of the deadliest days of the pandemic to date.

Seven of these deaths were not recent, and had been included after the result of coronial inquests.

Fines of $1,000 will apply to those who don’t with penalties coming into force from January 19

Positive results must be lodged within 24 hours of the test

How to upload your positive test result:

They then select ‘Register a positive test result’