New Zealand’s defeat by the Delta strain of Covid-19 could see a relaxation of international border rules by Christmas.

And Jacinda Ardern’s government is preparing to allow Kiwis with the virus to stay at home or isolate at community facilities if they do not need hospital-level care.

A predicted surge of coronavirus cases on the horizon has prompted the changes.

The hard border has been maintained as New Zealand pursued an elimination strategy against the virus, but the reluctant acceptance of ongoing community cases has turned the government’s mind to a border rethink.

Ms Ardern appears set to loosen the compulsory 14-day stay in a quarantine hotel – known locally as MIQ – on arrival.

‘We are actively considering our MIQ settings in light of the fact that we are unlikely to get back to zero cases,’ Covid-19 Minister Chris Hipkins said.

‘You can expect to see us talking more about that fairly soon.’

International travel has been on hold since July, when New Zealand suspended the trans-Tasman bubble due to growing cases in NSW and Victoria.

While there are several Covid-free regions in both countries – including Wellington and the South Island – the government has not had an appetite to reopen the bubble.

In August, a major review suggested NZ move to a traffic light system for arrivals in early 2022, based on the Covid-19 risk profile of where travellers have come from.

It is unclear whether it will continue to pursue that plan, given the virus appears set to stay in NZ.

New Zealand has already issued a vaccine mandate to international arrivals: as of next month, all non-citizens arriving in the country must be fully vaccinated against Covid-19.

For future moves, the government is keeping a close eye on Australia’s planned reopening next month.

‘People wanting to move between New Zealand and Australia … is one of the areas where there’s the most pressure for movement,’ Mr Hipkins said.

‘Whenever we’re talking about any changes at the international border, Australia is one of those countries that is absolutely front of mind.’

On Wednesday, Mr Hipkins warned of a ‘significant growth’ in cases in Auckland, where the virus is not under control.

NZ is now transitioning from elimination into a suppression model, quickly writing a new rule book to minimise cases and protect the under-resourced health system. 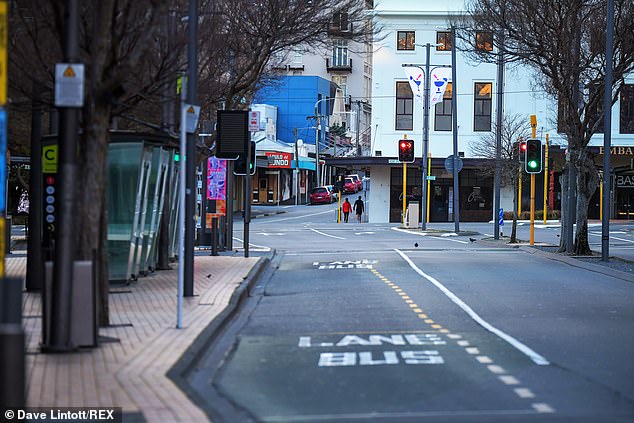 New Zealand (Wellington, pictured) could re-open its international border and resume its travel bubble with Australia for Christmas

The predicted surge in cases would challenge that capacity.

A proposed new measure is Community Supported Isolation and Quarantine, where low-risk cases could isolate not in MIQ or hospital, but at home or in other facilities.

‘Just three per cent of the cases in this outbreak have been vaccinated,’ Mr Hipkins said.

‘The best thing people can do to protect themselves and their whanau (family) is to get vaccinated.’

Around 80 per cent of eligible Kiwis have had at least one dose of vaccine, with 57 per cent fully vaccinated.