NSW has recorded 667 new Covid cases and ten deaths as the states major 70 per cent double dose milestone is set to be hit in coming days.

Health Minister Brad Hazzard said NSW residents will be able to access guidance on how business will resume from October 11 as locked down parts of the state gear up to reopen.

‘We will probably reach the 70% double dose vaccinations by probably mid this week. That means the following Monday is the date that we have our first removal of the restrictions.

‘That is a really big day for all of us who have lived through the agony of this pandemic.’

It comes as the state map’s roadmap out of lockdown hangs in the balance after Gladys Berejiklian’s shock resignation from her premiership on Friday after NSW’s Independent Commission Against Corruption revealed she was under investigation.

NSW has recorded 667 locally Covid cases as the state’s vaccination rates continue to rise. Pictured: A person runs along the coastal park at Bondi Beach in Sydney’s eastern suburbs on September 24

She said her resignation ‘could not happen at a worse time’, as the state prepared to leave COVID-enforced lockdowns in the coming weeks, but she had ‘no other option’ as ICAC investigates her over potential breaches of public trust.

NSW Treasurer Dominic Perrottet is the frontrunner to take over from Ms Berejiklian with Planning Minister Rob Stokes and Tourism Minister Stuart Ayres also considered contenders when the NSW Liberal parliamentary party meets to choose a new leader on Tuesday.

Mr Hazzard has urged sporting fans to act responsibly ahead of the NRL Grand Final that will be held at Brisbane’s Lang Park Stadium on Sunday.

The massive sporting event is expected to draw in tens of thousands of spectators with thousands more to watch the match from their televisions in NSW.

‘All the hard work that we have done, to have gone from 1599 cases just three weeks ago to 667 cases today has taken a lot of hard work. Please don’t ruin that,’ he said.

‘This is a game that we all must win.  We have to make sure that this virus does not get a hold and get back in the numbers that it can do very easily if we ignore the rules that our public health team have given us to keep us safe.’

Non-urgent day surgery is set to recommence in private health facilities on Tuesday as Covid-19 transmission rates continue to fall.

But non-urgent surgery at NSW public hospitals will remain postponed.

‘This is to ensure we retain adequate system capacity, as well as patient, staff and public safety, for the delivery of healthcare services during the COVID-19 response,’ NSW Health said in a statement.

‘Emergency surgery and urgent elective surgery will continue to be performed in public hospitals during this challenging period.’

Ms Berejiklian’s stunning decision to quit on Friday came soon after ICAC revealed it was looking into potential breaches of public trust.

After four-and-a-half years in the top job, she will resign from NSW parliament as soon as a by-election for her north Sydney seat of Willoughby can be held.

The anti-corruption watchdog says it is investigating whether Ms Berejiklian ‘exercised public functions’ in a position of conflict given her secret five-year relationship with ex-MP Daryl Maguire, revealed at ICAC hearings in late 2020. 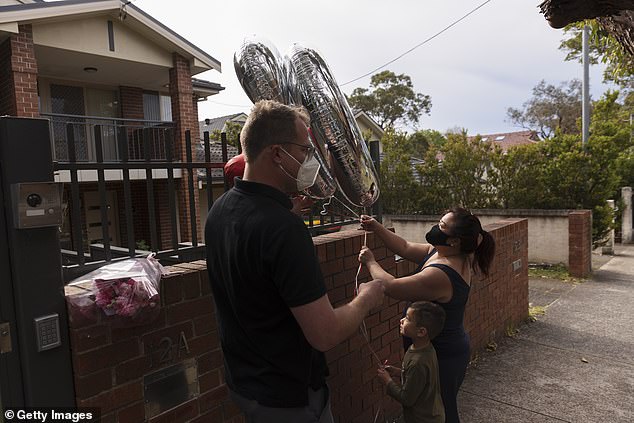 A wearied Ms Berejiklian said she had ‘no option’ other than to resign, as she could not temporarily step aside and resume her role after the investigation.

The premier said the people of NSW needed certainty regarding who their leader was during these challenging times.

‘I cannot predict how long it will take the ICAC to complete this investigation, let alone deliver a report,’ she said.

‘That is the ICAC’s prerogative. Resigning at this time is against every instinct in my being and something which I do not want to do, I love my job, and serving the community, but I have been given no option following the statement issued. 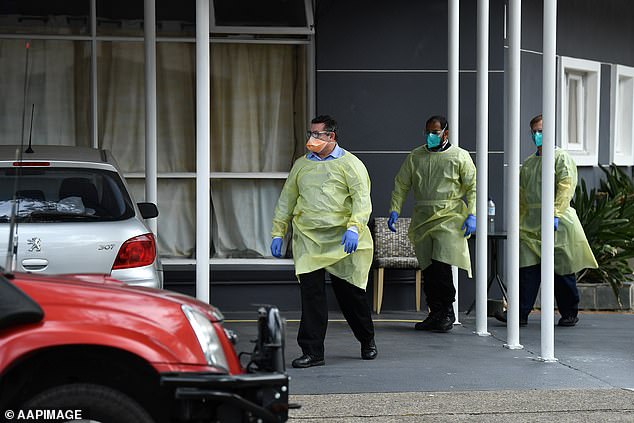 Ms Berejiklian said her resignation could not come at a ‘worse time’ as the state prepares to exit Covid lockdowns in coming weeks. Pictured: workers wearing protective equipment at the Manly Waves Studio and Apartments in Sydney on September 29

‘To continue as premier would disrupt the state government during a time when our entire attention should be focused on the challenges confronting NSW.

‘I do not want to be a distraction from what should be the focus of the state government during this pandemic, which is the wellbeing of our citizens.’

Meanwhile, there are currently 1,005 COVID-19 patients in hospital, with 202 people in intensive care, of which 99 are on ventilation.

Around 87.7 per cent of people aged 16 and over have received their first dose of the vaccine, and 65.2 per cent both jabs.

Sydney is expected to open up on October 11, the Monday after 70 per cent of the population have been fully vaccinated, marking an end to a gruelling four-month lockdown.

Sunday’s infections are a decline from the 813 new locally acquired cases of COVID-19 and reported on Saturday as NSW’s Delta outbreak continues to dwindle. 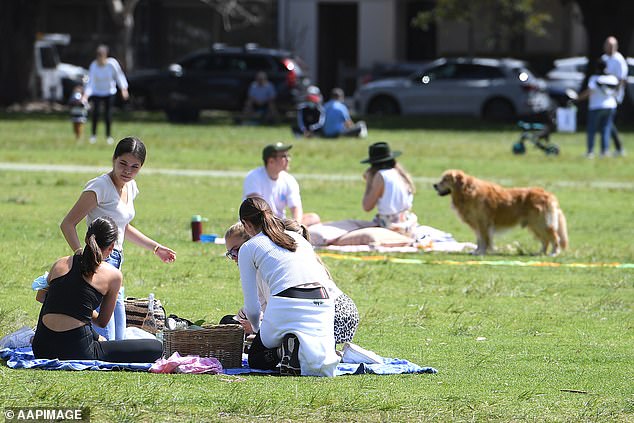 Sydney is expected to open up on October 11, the Monday after 70 per cent of the population have been fully vaccinated. Pictured: People picnic in Double Bay on Saturday after Covid restrictions were eased

Ten deaths were also reported in the 24 hours to 8pm on Friday, taking the death toll for the current NSW outbreak to 362.

‘This is fantastic news that vaccination rates are going up every day, so thanks to everyone for coming forward to protect yourself and families and others in the community,’ he said.

NSW Health on Friday also said it had detected virus fragments in sewage at Hastings Point and Ballina in the Northern Rivers region, Quirindi in the Northwest Slopes, and in Armidale and Tamworth.

People in those areas were encouraged to seek COVID-19 testing with even minor respiratory symptoms.

The suburb of Casino was placed into lockdown from midnight Friday until October 11 when the rest of the state will begin reopening gradually.

The stay-at-home order applies to anyone who has been in Casino since September 24.