Australians are clearing supermarket shelves of popular painkillers such as Panadol and Nurofen after a top medico said to stock up amid the Omicron surge.

Deputy chief heath officer Professor Michael Kidd urged people on Monday to be prepared for potential infections of the milder strain by having the over-the-counter medicines handy.

But the warning has caused a wave of panic-buying reminiscent of the toilet paper hoarding of 2020 – with many people saying they had gone to the supermarket and been unable to find the item.

Supermarkets shelves in Australia’s capitals are being cleared of Panadol and Nurofen after the deputy chief medical officer said the pills would be handy amid Omicron (pictured: a Woolworths store on Monday)

‘No Panadol on the shelves at my local Woolworths yesterday – stripped bare,’ one person wrote to Twitter on Monday.

‘Use Panadol they say. There’s no Panadol to buy at Coles, at Woolworths, at the 4 local chemists or at Aldi. There is no Nurofen either,’ another person said.

‘So the local Woolworths was saying they had Rapid Antigen Tests. Husband went down. Nope no RATs. All gone. Also no Panadol, Nurofen or any other painkillers. Well done Greg Hunt. This is how you create that hoarding sh** you were talking about,’ added a third.

Another person added they had searched for Panadol on the Woolworths online site and the item was unavailable. 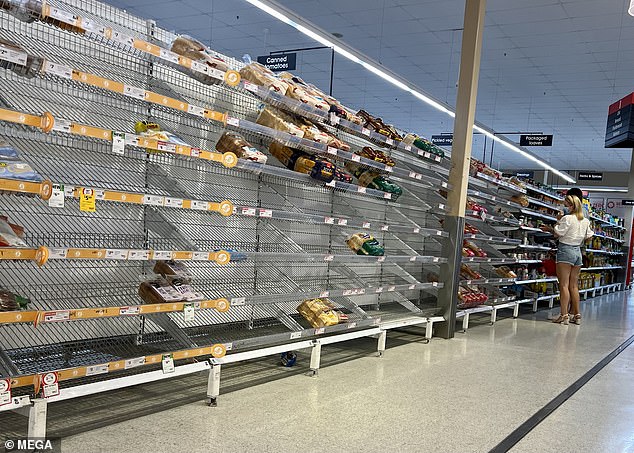 Supermarkets have been experiencing supply-chain issues in recent weeks with many stores running low on stock (pictured: a Queensland Coles store on Monday)

On Monday Professor Kidd said that with the prevalence of the Omicron strain, many Australians would likely test positive to the milder variant of Covid over the next few weeks.

‘With the rising case numbers we’ve seen over the past week in many parts of the country, it’s likely that many of us will test positive for Covid-19 over the coming days and weeks if we haven’t already done so,’ he said.

He said that having some the medicines around would help with mild aches and fevers that can be associated with Omicron.

‘The first thing to do is to be prepared. My advice is that you make sure you have some paracetamol or ibuprofen at home.’

‘It’s important to be prepared because you won’t be able to go to your supermarket or pharmacy if you are diagnosed with Covid-19.’

Professor Kidd added that drinking plenty of water is also essential and adding electrolyte powder such as Hydralite could also be beneficial.

While he said most cases could be mild ‘some might become seriously unwell’ so it was still important to isolate if you test positive and seek medical advice if stronger symptoms develop. 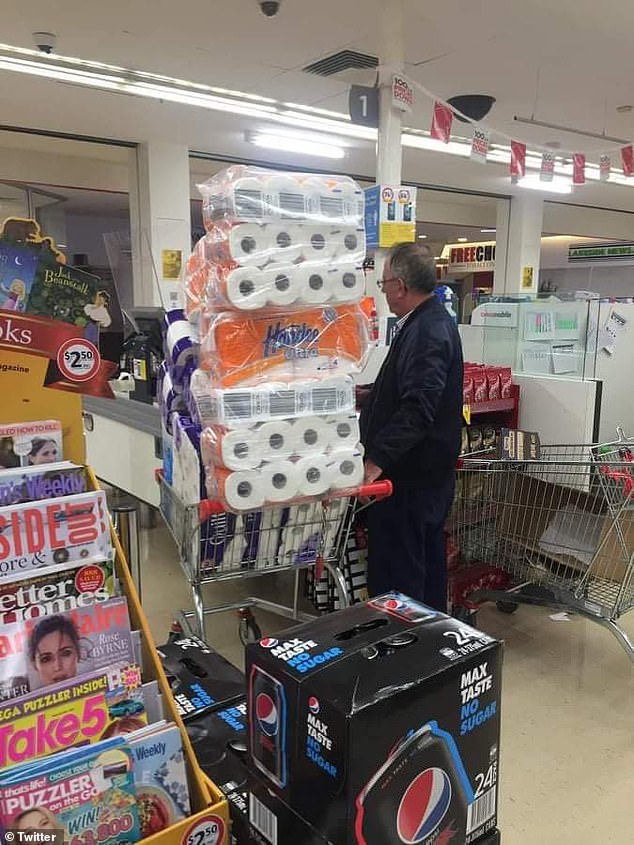 The increasing COVID-19 case numbers and subsequent isolation requirements have put pressure on food manufacturers and the transport and retail sector.

A spokesperson told AAP it was expected to take several weeks before things returned to normal.

The latest national cabinet meeting resulted in changes to testing requirements for truck drivers, removing the need for a PCR test every seven days.

The prime minister said the decision was key to ensuring food distribution networks could continue moving.

‘We need truckies keeping on trucking … to keep moving things around,’ he told reporters in Canberra on Thursday.

Transport Workers Union national secretary Michael Kaine told AAP the industry welcomed the changes to testing which had been putting significant pressure on the sector. But he said transport workers needed priority access to rapid tests to keep the industry moving.

‘These tests are an important weapon in the fight against the virus, and without them, the virus is hitching a ride through transport supply chains, putting workers and the industry in danger,’ he said.

The Victorian Farmers Federation called on the federal government to rethink isolation rules for workers in the industry as had been done for healthcare workers.

Meanwhile as of Thursday Woolworths had not introduced buying limits.

A spokesperson said stores had been impacted by supply chain issues but deliveries were still arriving daily.

They said stores will continue monitoring shelves in coming days and asked shoppers to be mindful of others when stocking up.