Covid Australia: Protect our Children protest in Sydney as vaccines begin for kids as young as five

Hundreds of protestors, including many mothers, fathers and children, staged a noisy ‘Protect our Children’ anti-vaccine protest in Sydney on Sunday.

From Monday, children aged from five to 11 will become eligible for Covid vaccinations, making Australia one of only a handful of countries to allow such young kids to be jabbed.

The Sydney rally followed a much larger anti-vax gathering in Melbourne on Saturday, where hundreds of protesters took to the streets in the name of ‘protecting children’.

The Australian Technical Advisory Group on Immunisation has deemed the Pfizer vaccine perfectly safe for children, and can help protect them from the delipidating effects of long Covid.

It relied on a recent clinical trial which showed the vaccine had mild or non-existent side effects for children and helped to protect them from illness. 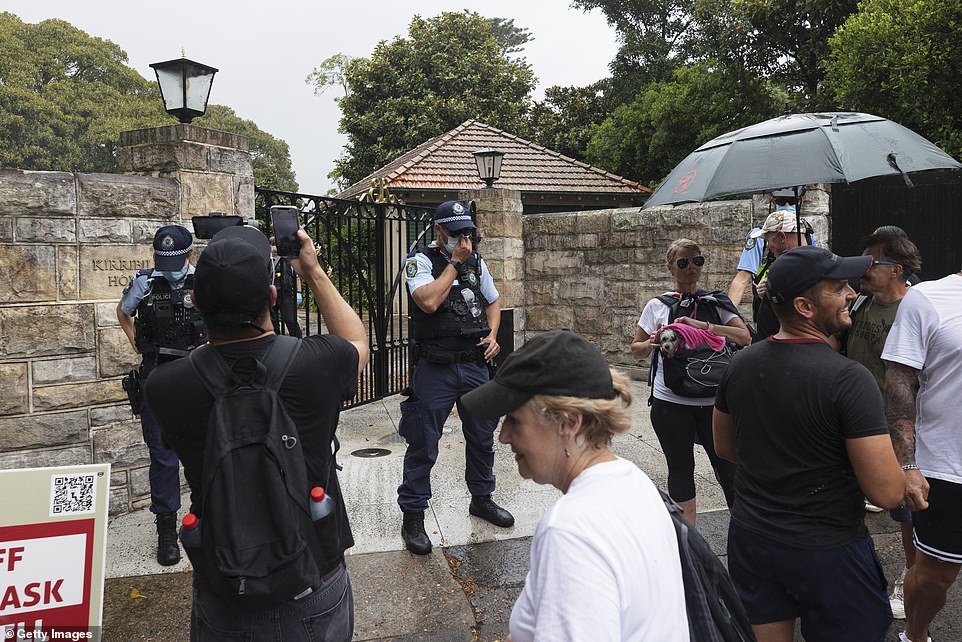 Anti-Covid vaccine protesters (pictured) gather in front of police officers outside Kirribilli House, the Sydney residence of the Australian Prime Minister, on January 9, 2022

IS THE VACCINE SAFE FOR KIDS?

Vaccines give the immune system a helping hand to protect against serious illness and possible long-term effects from COVID-19. Vaccination also helps to protect friends, family and the community by reducing spread of the virus.

The Pfizer (Comirnaty) children’s vaccine is the approved COVID-19 vaccine for children aged 5 – 11 years in Australia. The dose is around 1/3 of the dose for people aged 12 years and older.

Children will receive two doses of the vaccine, given 8 weeks apart. In certain circumstances, the second dose can be brought forward to 3 weeks after the first dose, including:

Parents are encouraged to book a vaccination appointment for their child as soon as possible. Talk to your GP if you have any questions or concerns about COVID-19 vaccination for your child.

Sunday’s protest came as NSW recorded its worst day yet of the pandemic, with 16 deaths. There were also  30,062 recorded new cases of Covid in the state as the Omicron strain runs rampant – but this is likely to be much higher due to the lack of reporting of positive rapid test results, with no system yet set up to do so.

The protestors gathered in Hyde Park in the city centre and then made their way across the Harbour Bridge to Kirribilli House on the north shore of the city.

The wet weather in Sydney dampened the enthusiasm of some of the protestors, with more of them carrying umbrellas than placards.

Many of those marching waved upside down Australian flags, seemingly in rejection of the way the government is handling the Covid-19 pandemic.

Among those protesting in Sydney was former Liberal Party MP Craig Kelly, who is now the leader of the United Australia Party.

Mr Kelly took to Twitter to accuse the NSW government of a cover up over Covid-19 deaths.

‘Another day, another FAILURE to disclose vaccine status. AND if underlying health conditions,’ he wrote on the social media platform. 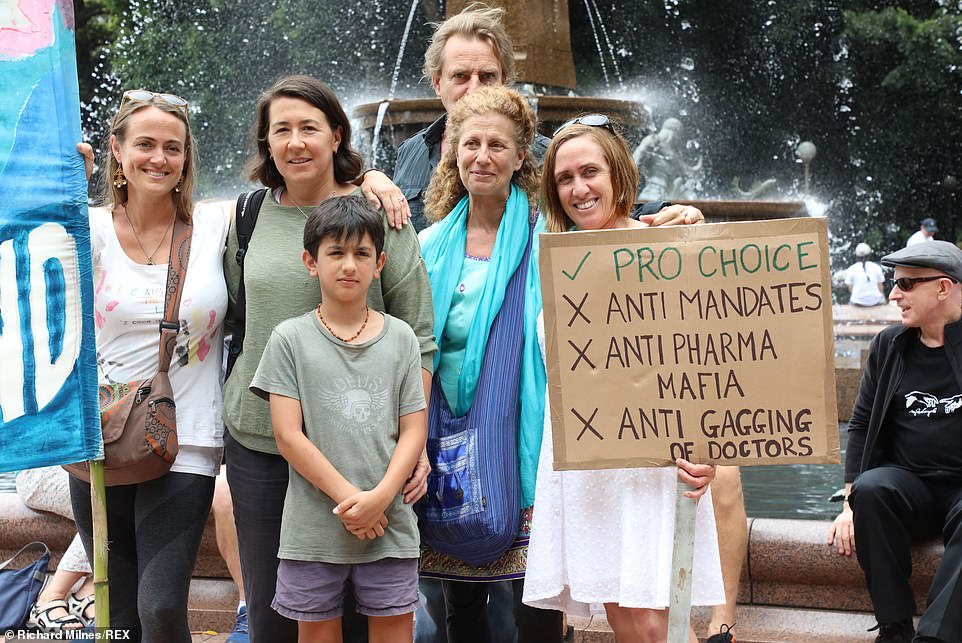 Protesters (pictured) against mandatory vaccines gathered at Hyde Park in Sydney on Sunday. Australia’s vaccination program will be extended to children aged five to 11 years from January 10 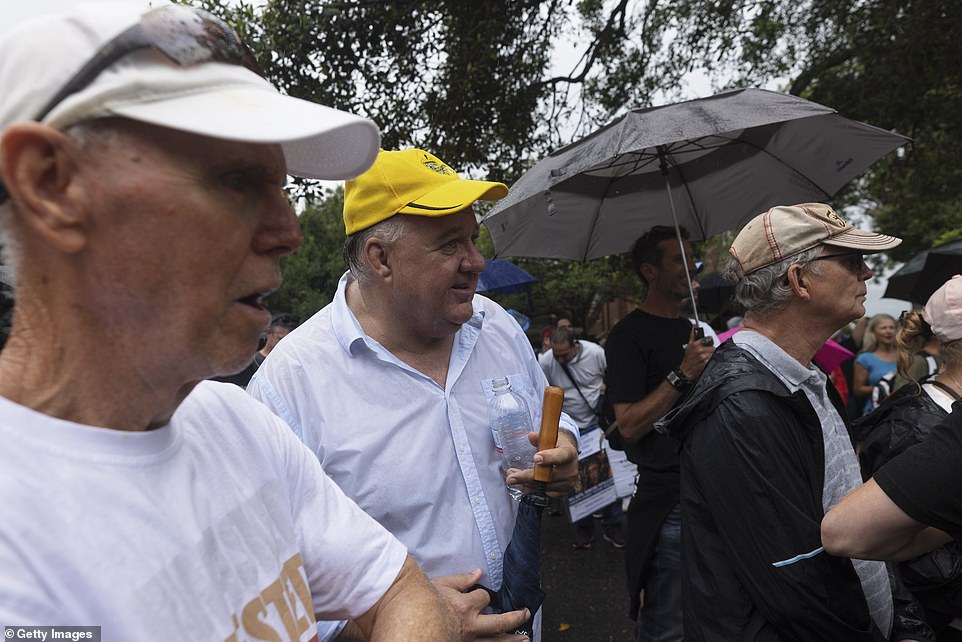 ‘We must know the WHOLE truth. “Safe & effective” they said. What a disgusting show. Perrottet, Hazzard & Chant must GO. 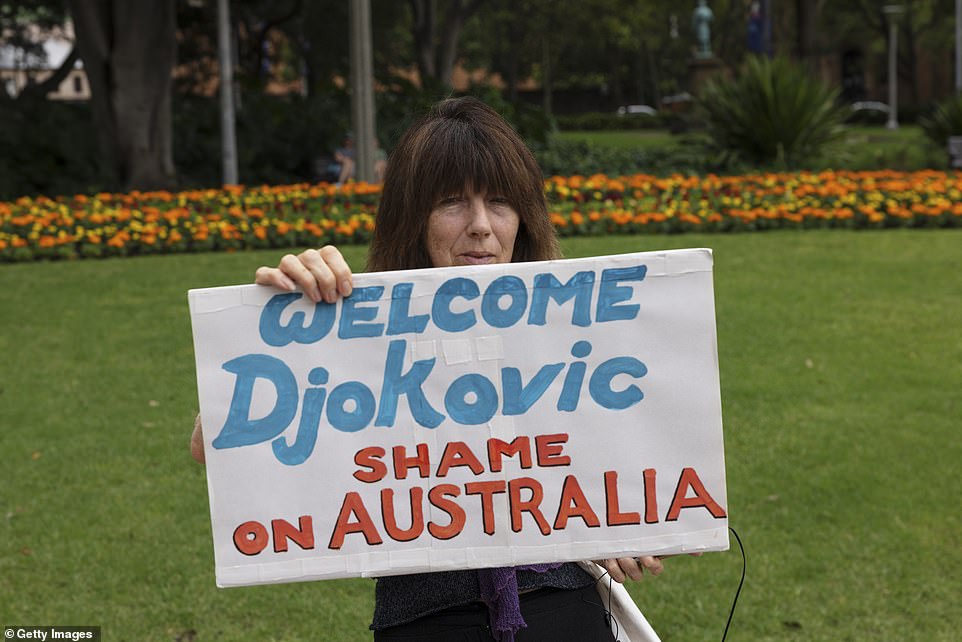 Some protestors, such as the woman pictured, held placards in support of Serbian tennis player and anti-vaxxer Novak Djokovic 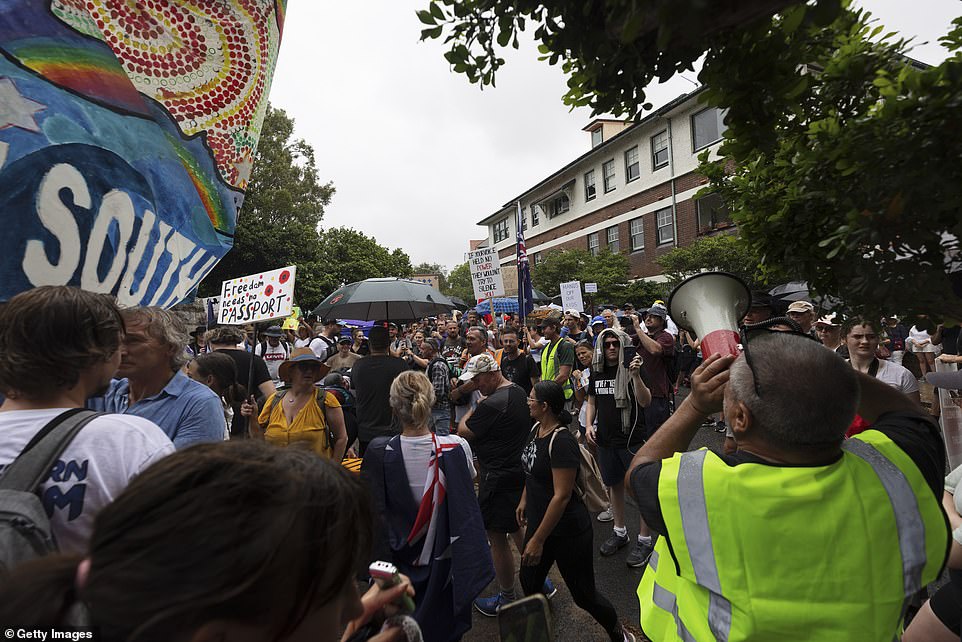 Many of the marchers in Sydney held signs saying ‘Hands off our kids’, while some held messages of support for Serbian tennis player Novak Djokovic, who is being held in immigration detention in Melbourne after his Australian visa was cancelled.

Some of the signs referred to him as Novax Djokovic, a reference to the player’s stance on Covid vaccinations.

Djokovic’s appeal against the cancellation of his visa is set to begin in Melbourne on Monday morning after the federal government failed in its bid to have the process delayed. 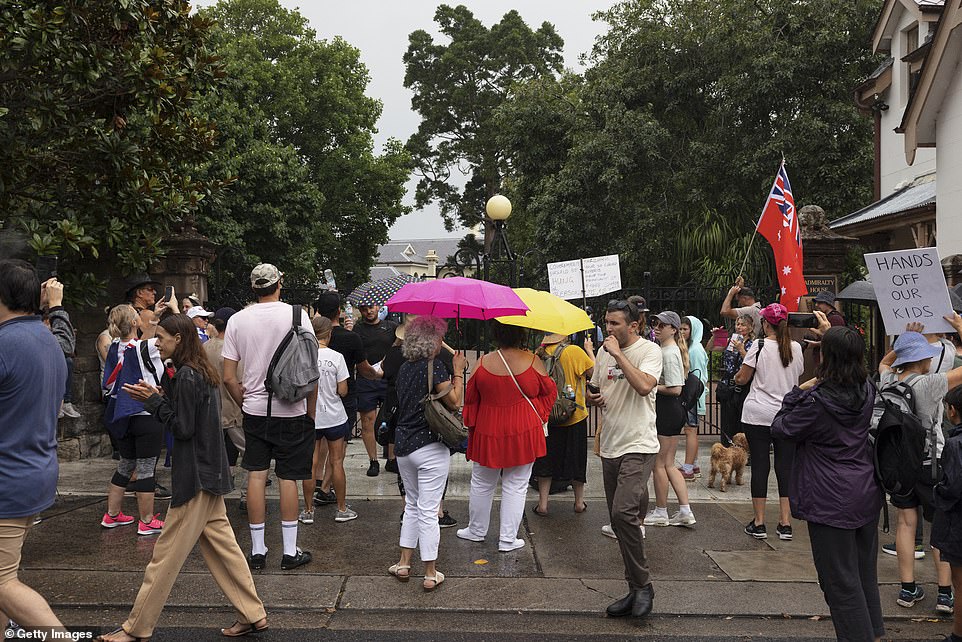 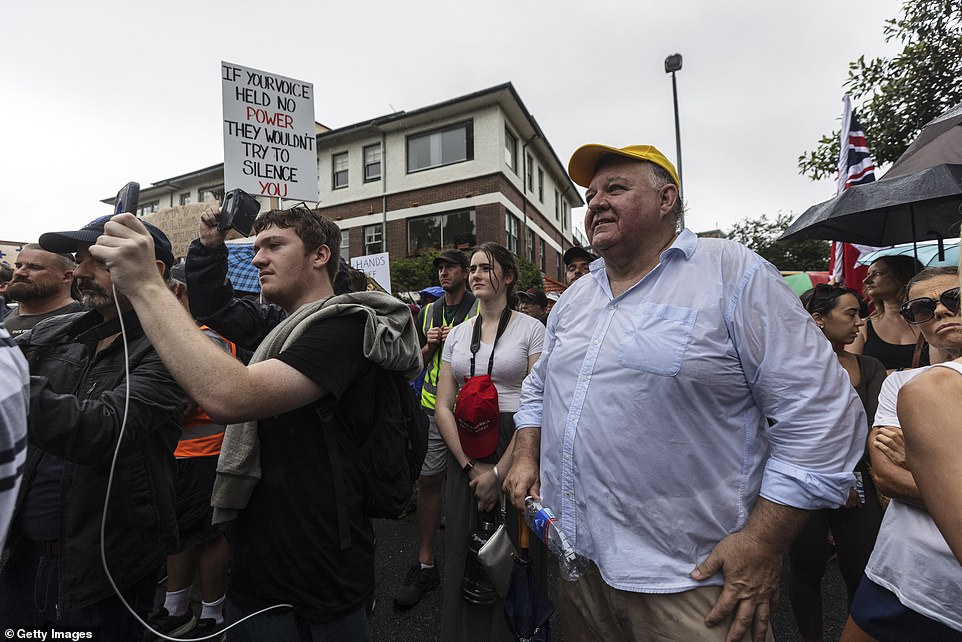 The 16 people whose deaths from Covid were recorded on Sunday included eight women and eight men aged in their 60s, 70s, 80s, and 90s.

There are 1,927 Covid-19 cases in hospital, with 151 people in intensive care, 38 of whom require ventilation. 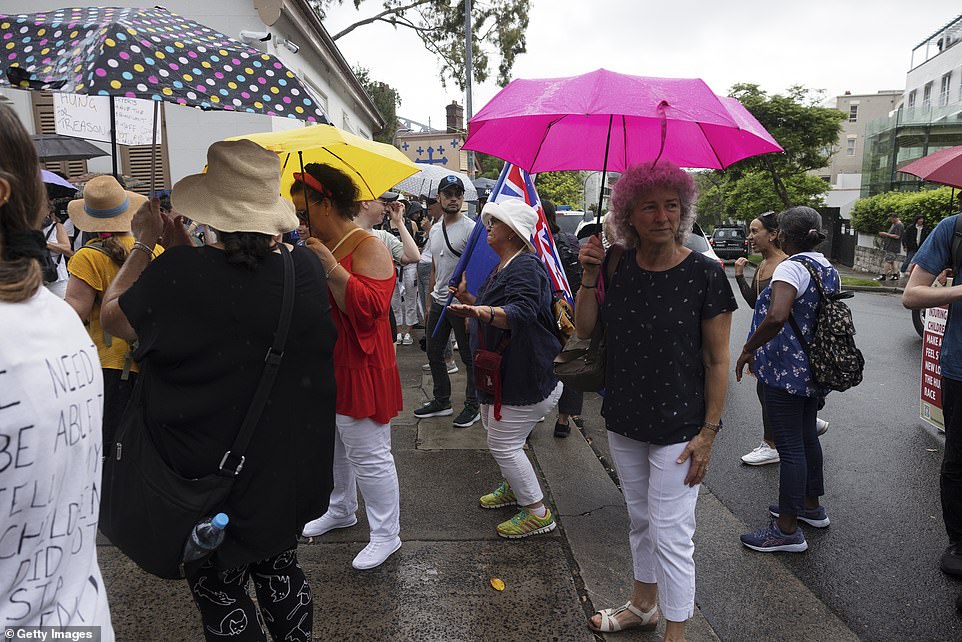 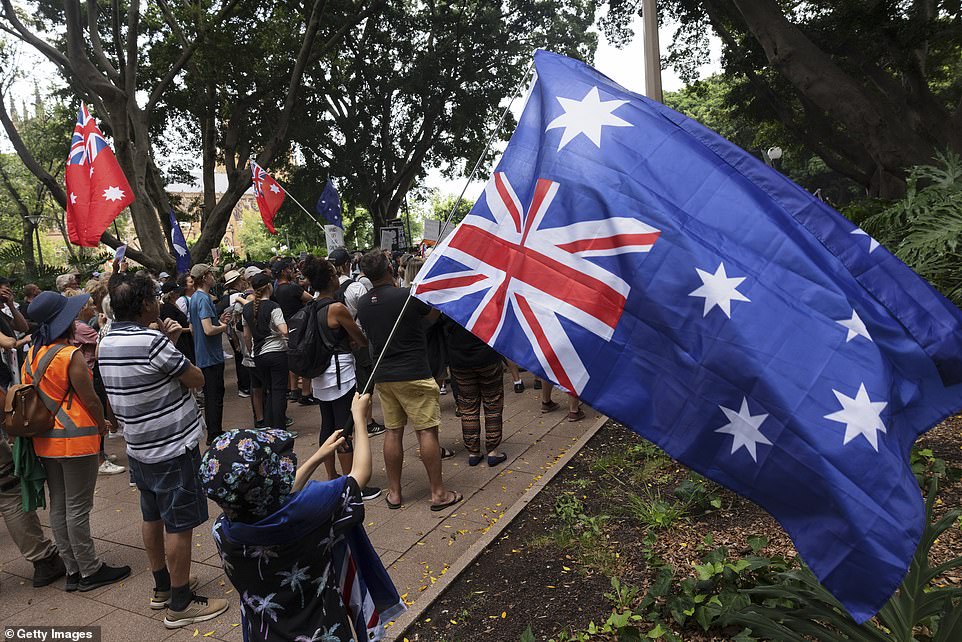 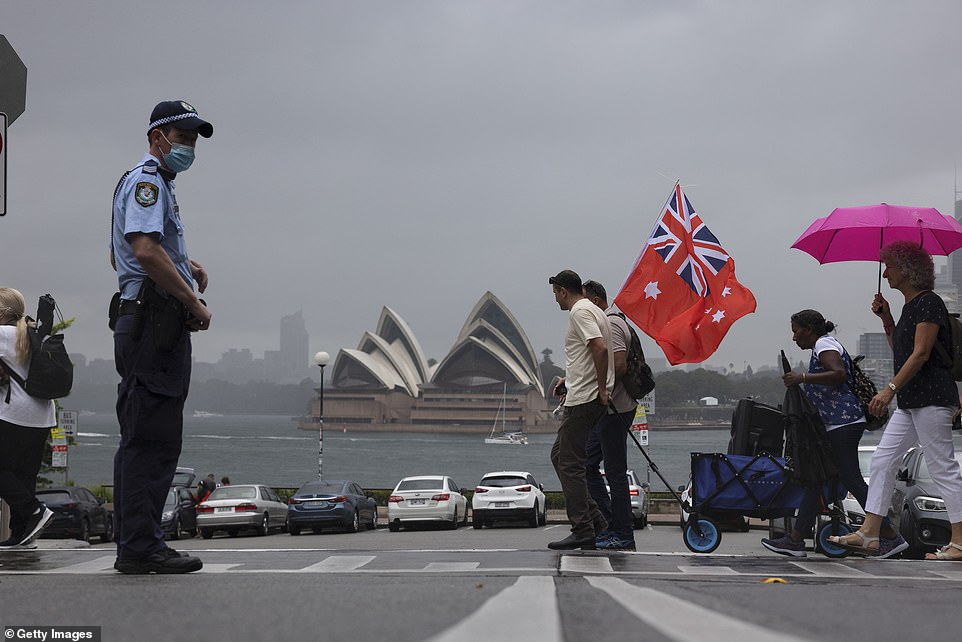 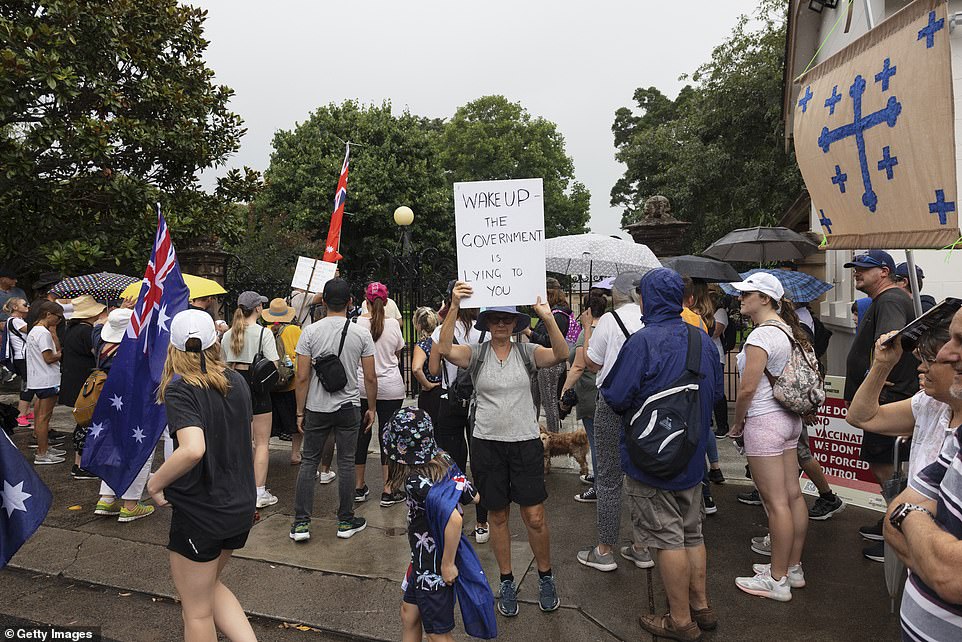 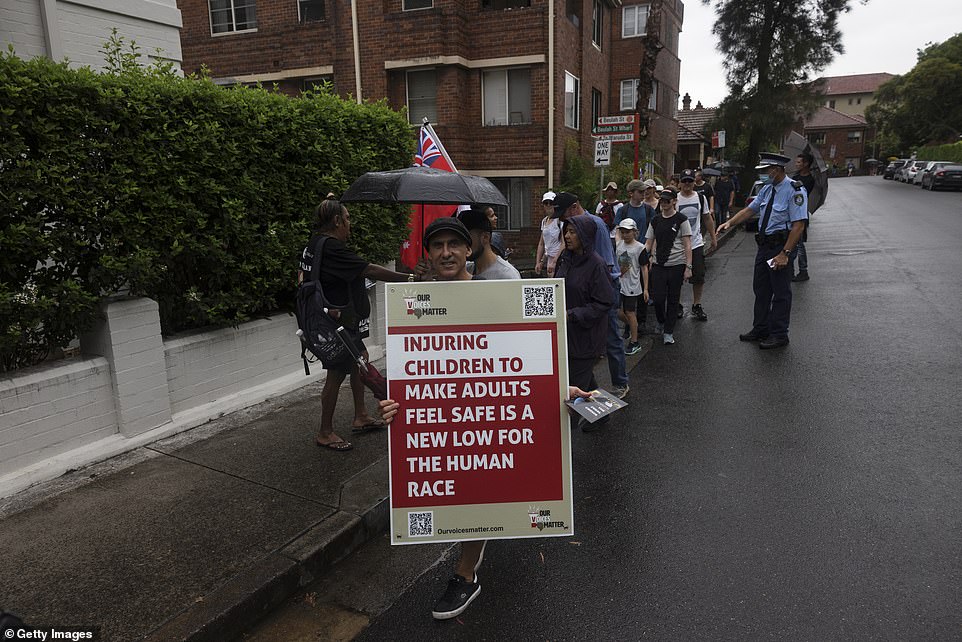 A protestor (pictured front) holds a sign saying vaccinating children amounts to injuring them to make adults feel safe, calling it ‘a new low for the human race’ 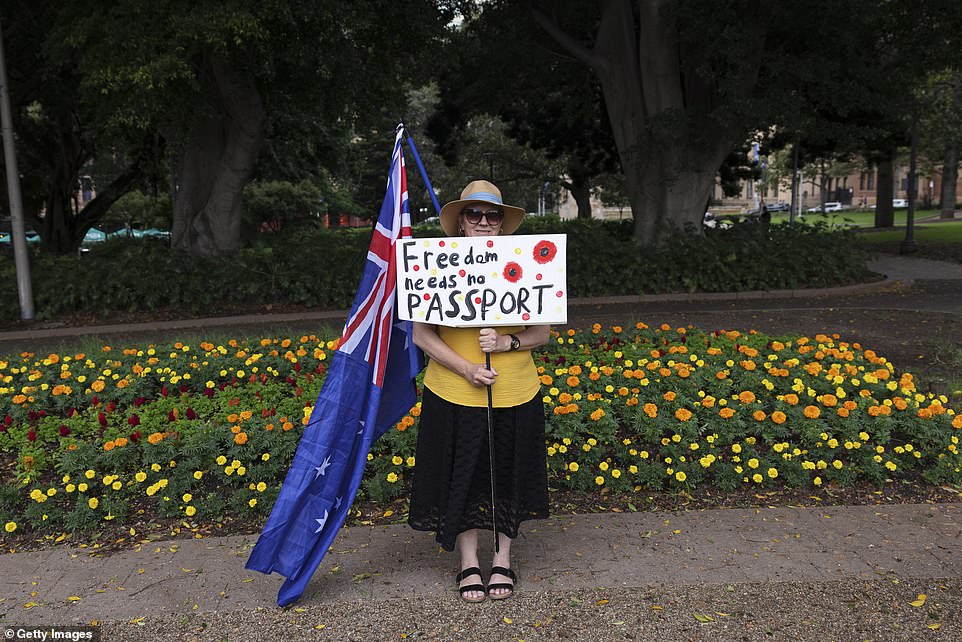 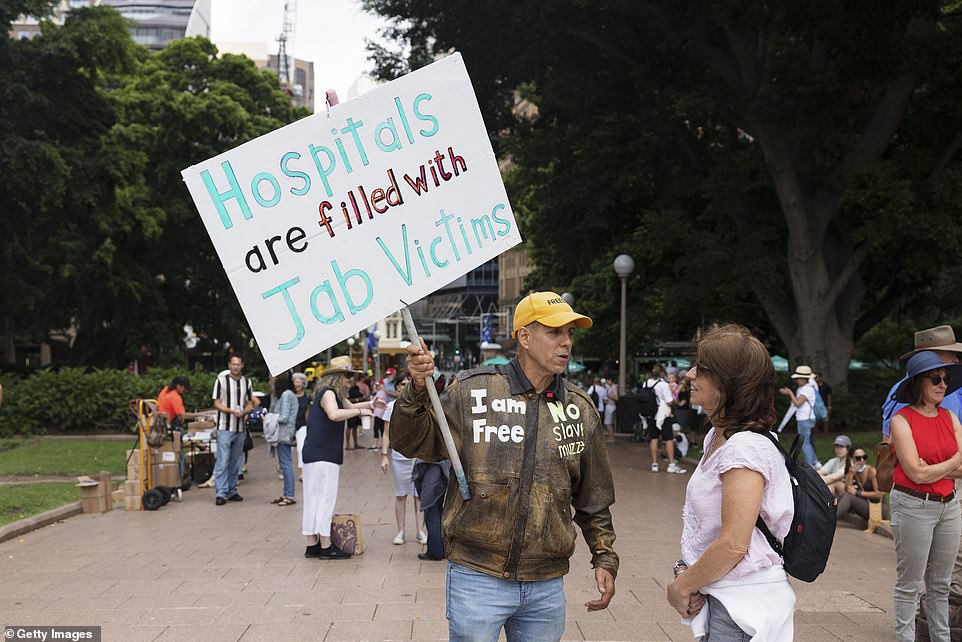