Covid Australia: The Victorian suburbs where over 75 PER CENT of residents are already double jabbed

A handful of Victorian tows have defied the state’s sluggish Covid vaccine rollout – with more than 75 per cent of adults in one seaside village double jabbed, racing ahead of Melbourne’s idling 39 per cent full-vaccination rate.

Under the federal government’s national Covid-exit plan, lockdowns will become rare once 70 of over 16s are fully vaccinated, with further freedoms – such as domestic and overseas travel – to resume from 80 per cent.

Queenscliffe, a 3000-strong port south-west of the state capital, has hit an impressive pace with 95.9 per cent of the population having received one dose and three in four residents having received their second.

Surf Coast, in the state’s south west, and Buloke, in the west, are next on track to hit the national target, with almost 60 per cent of residents double vaccinated, well above the 34.3 per cent national average.

Regional Victoria, which has a 47.5 per cent double-dose rate, has been steaming ahead of Greater Melbourne (39 per cent), despite Covid outbreaks largely being confined within metropolitan areas.

Only a handful of LGAs in Greater Melbourne – such as Boorondara, Mornington Peninsula, Nillumbik, Glen Eira – have breached the 50 per cent fully-vaccinated mark – while the rest are hovering between 30-46 per cent.

This map of Victoria shows first dose vaccination rates across the state, with more than 50 per cent of residents in some parts of locked-down Melbourne yet to receive one Covid jab

Melbourne City Council is faring the worst in the state – with just 28.8 per cent of eligible locals rolling up their sleeves for both doses.

The crawling vaccination rate is unwelcome news for the millions of Melbournians under strict stay-at-home orders – only permitting them to leave for essential reasons – as authorities grapple to contain Covid outbreaks.

Shepparton, which had been the only other area under lockdown, will be released with its restrictions to mirror the rest of the regions from midnight on Wednesday after a local outbreak was brought under control.

Earlier this month, Premier Daniel Andrews announced restrictions would remain in place until 70 per cent of eligible Victorians have received one dose of a Covid-vaccine – expected to be hit on September 23 – but is yet to detail what measures would be lifted.

While the nation’s vaccine rollout has been hampered by limited supplies – the issue has been exacerbated in Victoria after the federal government diverted doses to NSW as it battles the biggest Delta outbreak in the country. 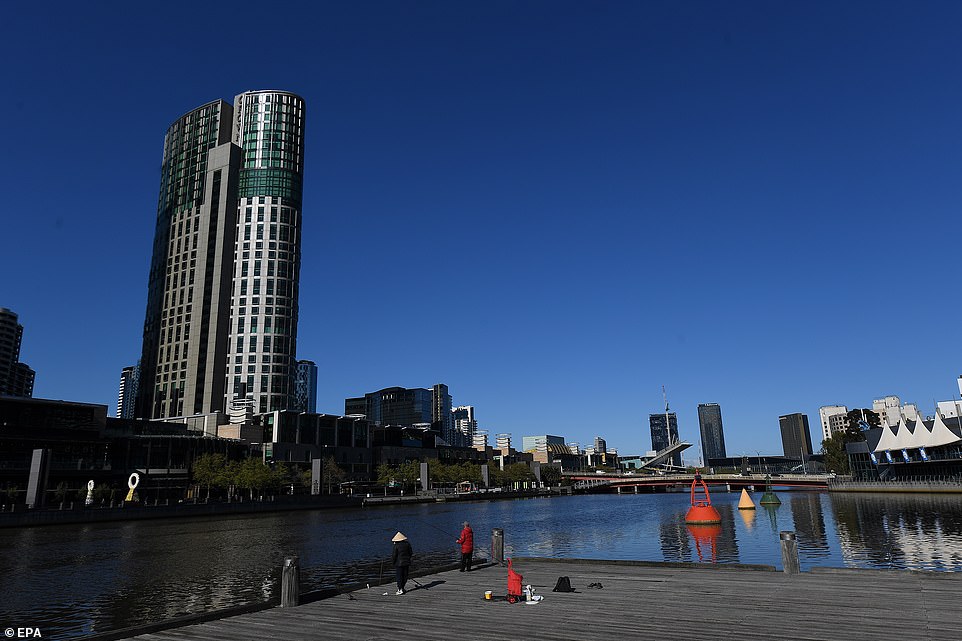 Millions of Melbournians are enduring the city’s sixth lockdown, as the state’s slow vaccine rollout delays their freedom. Pictured: People are seen fishing in Melbourne on Tuesday

Victoria, where cases remain high after 423 new infections on Wednesday, is now more than three weeks behind NSW in reaching the 70 per cent double dose target, which the northern state expects to hit in mid-October.

Statewide, only around 40 per cent of eligible Victorians are fully vaccinated and around 65 per cent have had their first dose – compared to 47.5 per cent and 79.5 per cent, respectively, in NSW.

As Melbourne endures its gruelling sixth lockdown, Mr Andrews has come under fire for failing to provide clarity over what freedoms Victorians will enjoy once vaccination targets are met.

Last week, VIC opposition Leader Matthew Guy called on the government to start drawing up plans out of lockdown, like the Covid roadmap devised by NSW Premier Gladys Berejiklian.

In NSW, fully-vaccinated people will be able to visit family and friends who’ve been double jabbed, dine out, travel and go to the hairdresser, gym or sports events at a 70 per cent double-dose jab rate.

On Wednesday, Premier Daniel Andrews confirmed the state’s roadmap out of lockdown will be released on Sunday.

The roadmap, outlining restrictions through to November, will rely on Burnet Institute modelling of vaccination and hospitalisation rates.

However, Mr Guy has criticised the government for ‘stringing the community along for another week’.

He called for an immediate end to the 9pm to 5am curfew, family outdoor gatherings and the return of Year 11 and 12 students for the start of term four.

The 10 LGAs with the lowest rates

The 10 LGAs with the highest rates

Of the 423 new infections, 149 cases are linked to known outbreaks, with the source of the remaining 274 under investigation.

In the 24 hours to Wednesday morning, 54,649 tests were processed and 41,856 Victorians received a vaccine dose at a state-run hub, with the number of active cases in the state now 4038.

There were also two new deaths bring the toll from the state’s current outbreak to eight.

Mr Andrews also announced Victorians may be given more freedoms from Friday, with an extra hour of exercise and an expanded travel limit on the table once 70 per cent of those eligible have received their first COVID-19 dose. 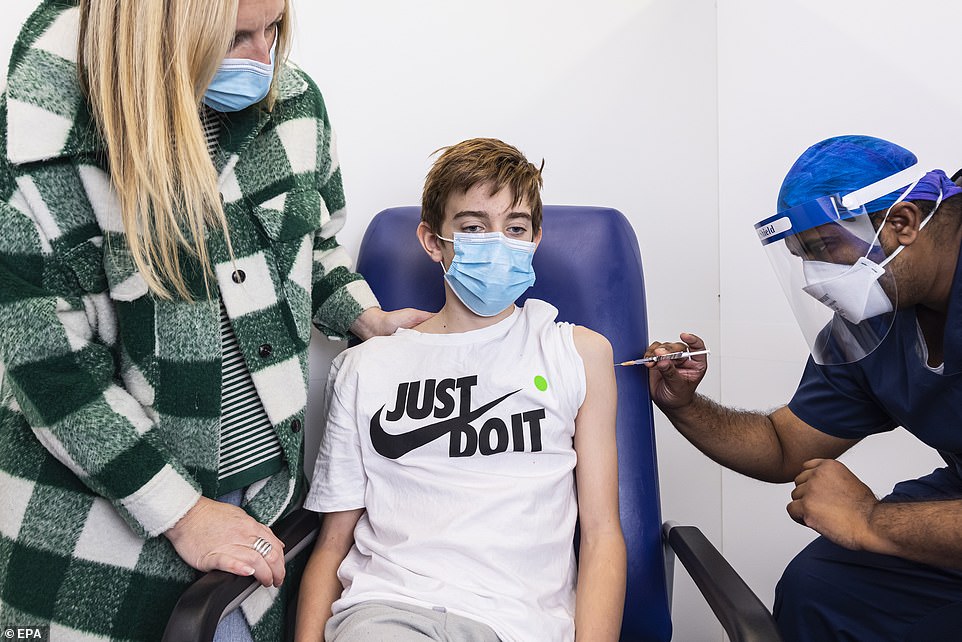 Only 39 per cent of people in Greater Melbourne are fully-vaccinated, compared to 47.5 per cent across regional Victoria. Pictured: A young boy receives a Pfizer vaccine in Melbourne on Monday

‘We have seen hundreds of thousands of vaccines that should have come and now should be in the arms of Victorians going into Sydney, into GP practices and into NSW,’ Mr Andrews said earlier this month.

‘We don’t begrudge that Sydney is in a very different set of circumstances.’

‘But this was not announced. It was done without anyone knowing. The Commonwealth have got caught doing it. So it needs to stop.’

‘Something like 340,000 doses have not come to Victoria that should have which would have meant we were closer to 70 and 80 per cent.’

‘It would mean we were closer to ending these lockdowns, so you can see a sense of frustration, and I’m sure in others, of anger.’

Meanwhile, NSW residents are counting down 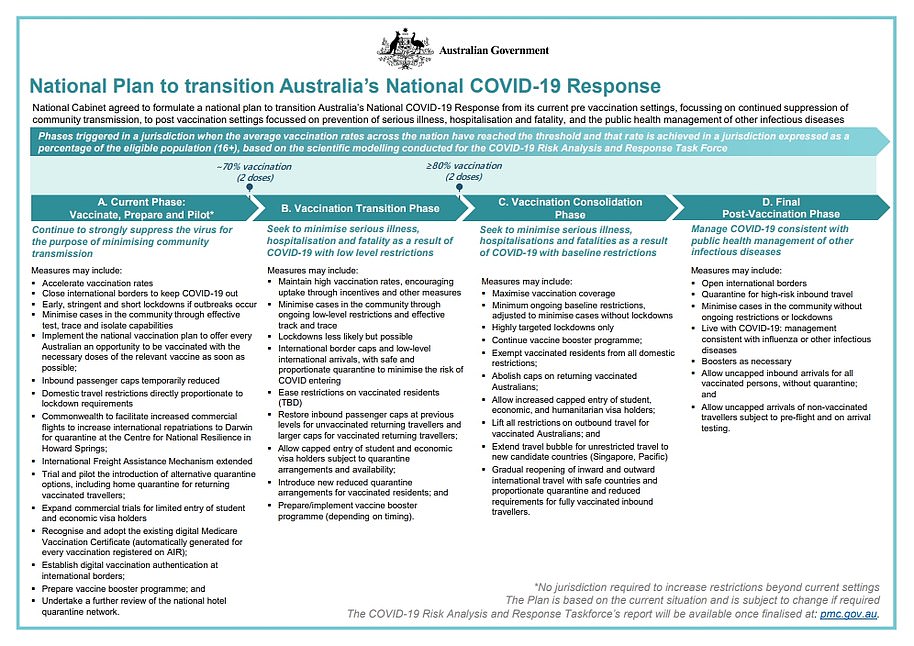