The COVID baby boom that many experts were predicting would come as a result of lockdowns and stay-at-home orders was actually a bust, a new report finds.

Additionally, the number of births fell every month last year in comparison with the year before, with the largest drop seen in December.

What’s more, declines were seen during the second half of 2020 – six percent from the year prior – in comparison with the first half of the year, which was only down two percent.

The CDC says the drops were the result of continuing declines of fertility rates over the last several years coupled with an unsteady economy, and adults experiencing fear and anxiety over the public health crisis and its uncertain end. 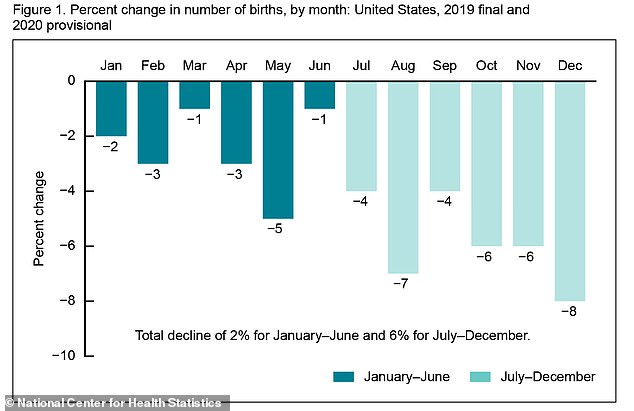 For the report, the CDC looked at birth records processed by the National Center for Health Statistics for 2018, 2019 and 2020.

The number of provisional births that occurred in 2020 were compared with the final counts of 2019.

In addition to the four percent drop in births from 2019 to 2020, researchers found that the number of births declined for each month. 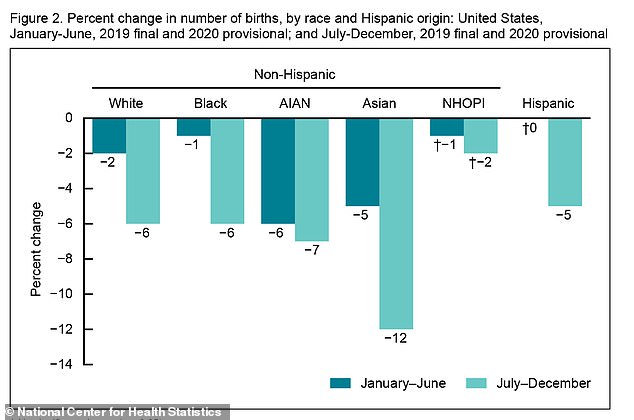 Births in the U.S. had already been on the downswing following the Great Recession of 2008-09. 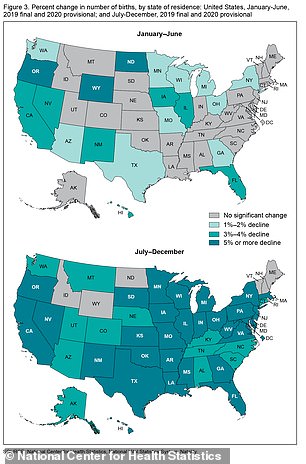 The states that saw the biggest declines from 2019 to 2020 were New Mexico, Wyoming, California, Hawaii and New York

Demographers and public policy experts say that birth rates diminished following the onset of the Great Recession and have not recovered.

Lastly, the team looked at declines in births by state

During the first half of 2020, there were 20 states that reported drops compared to the year before.

In the second half of the year, every single state and the District of Columbia reported declines compared with the same period in 2019.

Results showed that New Mexico and Wyoming saw the biggest drop with a decline of seven percent each from 2019 to 2020.

‘The impact of the pandemic on the United States in 2020 varied by month, as reported infection cases rose rapidly through the year, from 26 cases in early March to over 20 million cases at the end of December,’ the authors wrote.

‘Evaluation of trends in births by month will continue to determine whether these declines continued into 2021 or were unique to 2020 during the time of the initial COVID-19 pandemic.