Sweden could have saved thousands of lives if it imposed a lockdown last spring instead of opting against restrictions, researchers say.

The Scandinavian nation defied calls to take the draconian action in the first wave, prompting fierce criticism of its ‘herd immunity’ approach.

Around 6,000 Swedes died during the first six months of the pandemic, official figures show.

But scientists say the true death toll could have been slashed by 40 per cent, had policymakers decided to impose lockdown restrictions like Britain, Italy, Germany, France and Spain.

Academics behind the analysis have refused to criticise the move, however, saying that lockdowns come with ‘social costs’ that they did not study.

Sweden drew early praise from lockdown sceptics across the globe at the start of the pandemic for being one of the few countries globally not to impose tough Covid restrictions.

Critics of blanket restrictions hailed figures showing that Sweden’s death toll was still smaller than Britain’s for the size of its population.

The coronavirus eventually petered out and low numbers were used to fight harsh restrictions, with sceptics holding Sweden up as proof herd immunity had worked to stifle the virus.

But the disease reared its head again last December. Sweden now has the highest infection rate in Europe, with 467.5 cases per million people recorded yesterday.  The nation’s hospitals are taking a battering, with intensive care units last month dealing with more Covid patient than at any point in the pandemic.

Despite the spike in cases, the country has still not entered a full-on lockdown.

But it was forced to introduce some more stringent measures at the start of the year, including limiting the numbers of people allowed at social gatherings to eight.

Ministers had to delay restriction-easing plans until the middle of this month in order to cope with the strain on health services. 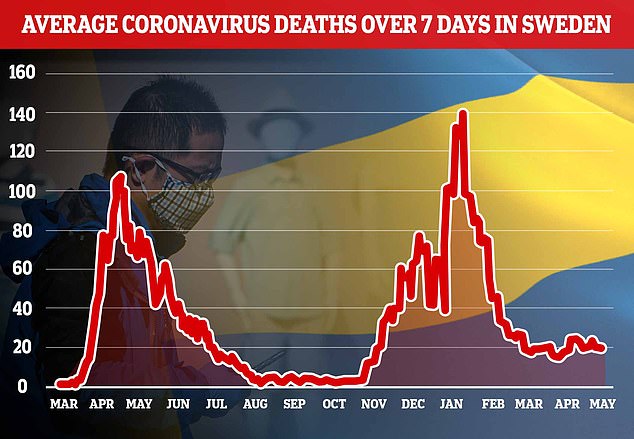 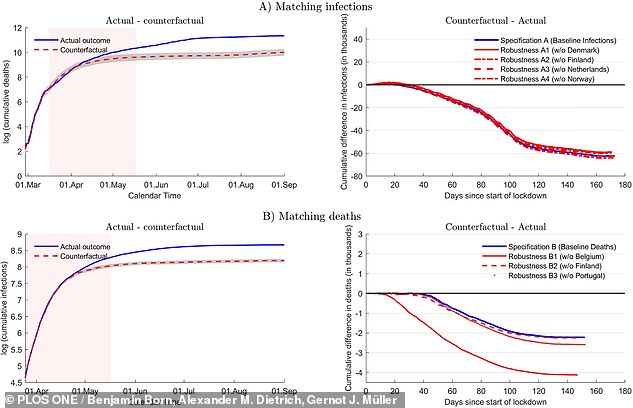 Frankfurt School of Finance and Management and University of Tübingen researchers found more than 2,000 lives could have been saved in the first wave of the pandemic if Sweden had entered lockdown sooner. Graphs show how cases (top) and deaths (bottom) would have differed if lockdown on March 15 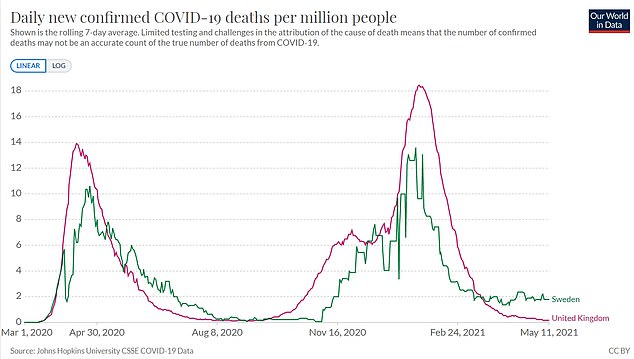 Critics of blanket restrictions hailed figures showing that Sweden’s death toll was smaller than Britain’s for the size of its population but while Britain’s deaths per million have continued to fall since January, Sweden’s plateaued and are now more than twice as high

The country’s death rate per one million people is many times higher than that of its Nordic neighbours. Sweden had 467.5 cases per million recorded yesterday, compared to 158.7 in Denmark, 80.6 in Norway, 37.7 in Finland and 33.6 in the UK.

WHAT ARE SWEDEN’S CURRENT LOCKDOWN RULES

Sweden tightened social distancing rules for shopping centres, gyms and private gatherings in January after spending 2020 with only voluntary restrictions in place.

It said it was ready to close businesses if needed, but stopped short of a lockdown to fight the spread of the pandemic.

Gyms, sports centres, shopping malls and public pools had to set a maximum number of visitors based on their size.

In addition, private gatherings were limited to 8 people, a rule which until then had only affected public events.

Plans to ease restrictions last month were delayed until at least mid-May because of the country’s current third wave.

Restaurants have to close at 8.30 pm and that shops and malls can only let in limited numbers of customers. Sport venues and public pools will remain effectively closed to visitors.

But German economists suggested around 38 per cent of lives could have been saved in its first wave had it introduced measures.

Experts calculated deaths could have been slashed from 5,800 to 3,600.

The group, led by Benjamin Born, produced a statistical model to show how the first wave would have played out if Sweden had introduced a full-scale lockdown on March 15 — eight days before Boris Johnson put the stay at home order on Britain.

The study, published in science journal PLOS One, found 75 per cent of cases could have been prevented if mandatory restrictions were brought in on that date.

Gernot Müller, one of the paper’s authors professor of international macroeconomics at Tübingen University, told The Times the team’s research does not take into account the social costs of lockdowns — it shows how many lives could have been saved if one had been imposed earlier.

He said: ‘A lockdown during the first wave would have lowered infections and deaths substantially.

‘But because lockdowns also come with social costs which we do not analyse, we are not taking a stand as to whether Sweden should have imposed a lockdown.’

The paper compared what occurred in Sweden  with what may have happened if lockdown did happen using a ‘synthetic control unit’ — a common method used in economics.

It used a pool of European countries who did impose lockdown between March 15 and 17, including neighbours Denmark and Norway, to determine what may have happened in Sweden.

But the researchers warned the model is not entirely accurate because it cannot fully account for the hundreds of different factors.

The figure compared with 14,950 cases during the corresponding period last week.

The country of 10million inhabitants registered 44 new deaths, taking the total to 14,217. The deaths registered have occurred over several days and sometimes weeks.