Britain had the highest excess death toll in Europe last summer after the first wave, a study by the Office for National Statistics revealed today.

The ONS report found the UK suffered 6.7 per cent more deaths than normal from the start of 2020 to the week ending June 26. Spain had the second-highest level (5.9 per cent) compared to average and Belgium was third (3.5 per cent).

A time-lapse interactive map based on the ONS figures shows how the virus has triggered a wave of excess fatalities on the continent and in the UK throughout the pandemic.

The excess mortality rate is one of the best ways to compare the pandemic’s impact on countries because not only does it look at Covid victims, but it also includes all of the people who died from other causes as a result of lockdowns and hospitals being too full to treat them.

When the whole year up to December 18 was included Britain had the seventh highest excess death toll (7.2 per cent). Poland had the highest rate (11.6 per cent), followed by Spain (10.6 per cent) and Belgium (9.7 per cent). But this analysis was carried out before Britain had been through the worst of the second wave.

The ONS also found the UK had the highest level of excess deaths for under-65s by the end of 2020 in Europe, with deaths in this group 7.7 per cent higher than average by December 18.

Britain had suffered the highest number of Covid deaths in Europe and third highest in the world by June 26 after recording 40,333 victims of the virus, according to Our World In Data. It was followed by Italy, with 34,708 deaths, France, with 29,780, and Spain, with 28,338 deaths. 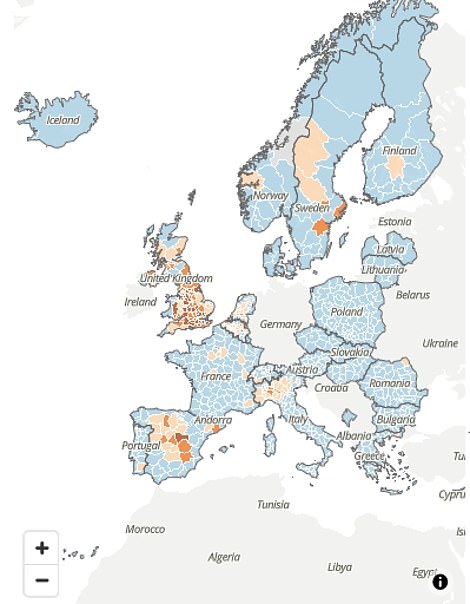 An interactive map reveals how the death toll in different areas of Europe by time (left March 27, and right April 24) 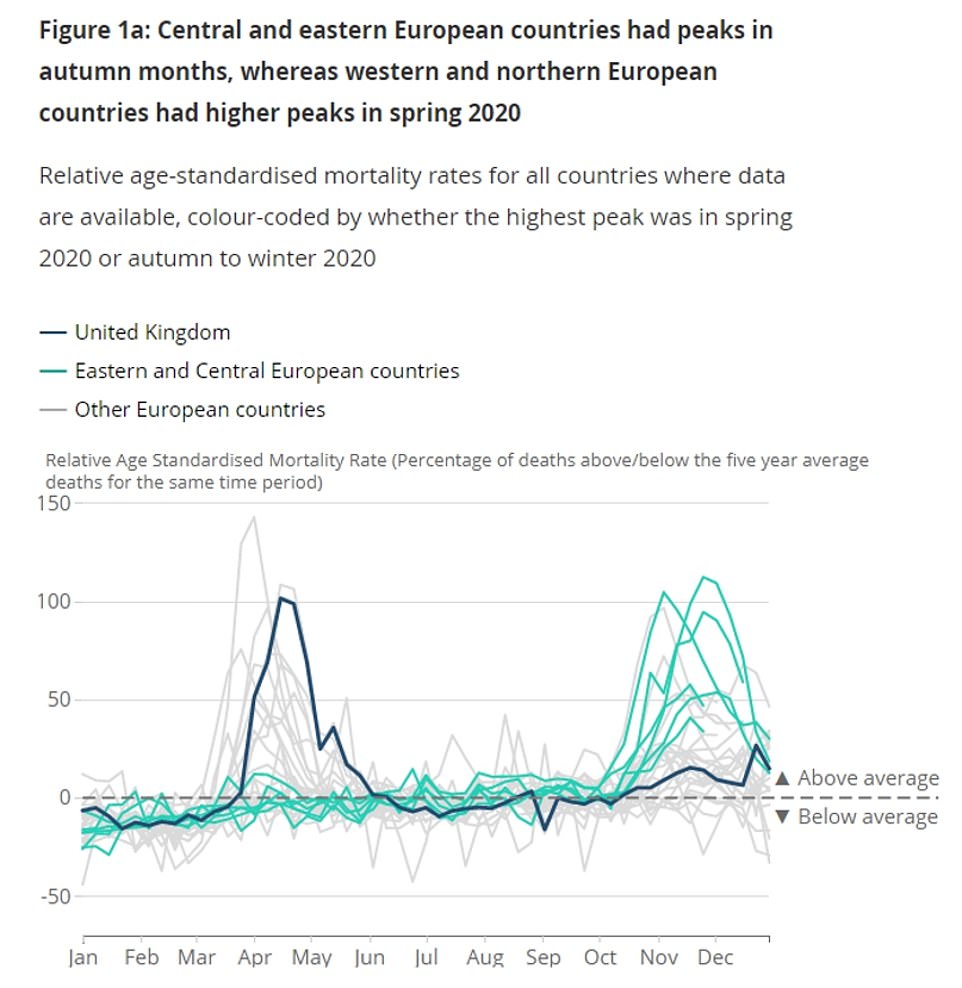 The UK suffered the highest number of excess deaths in Europe during the first wave, the ONS said. It had dropped to eighth place by the end of the analysis, December 18, which was before the continent felt the full force of the second wave 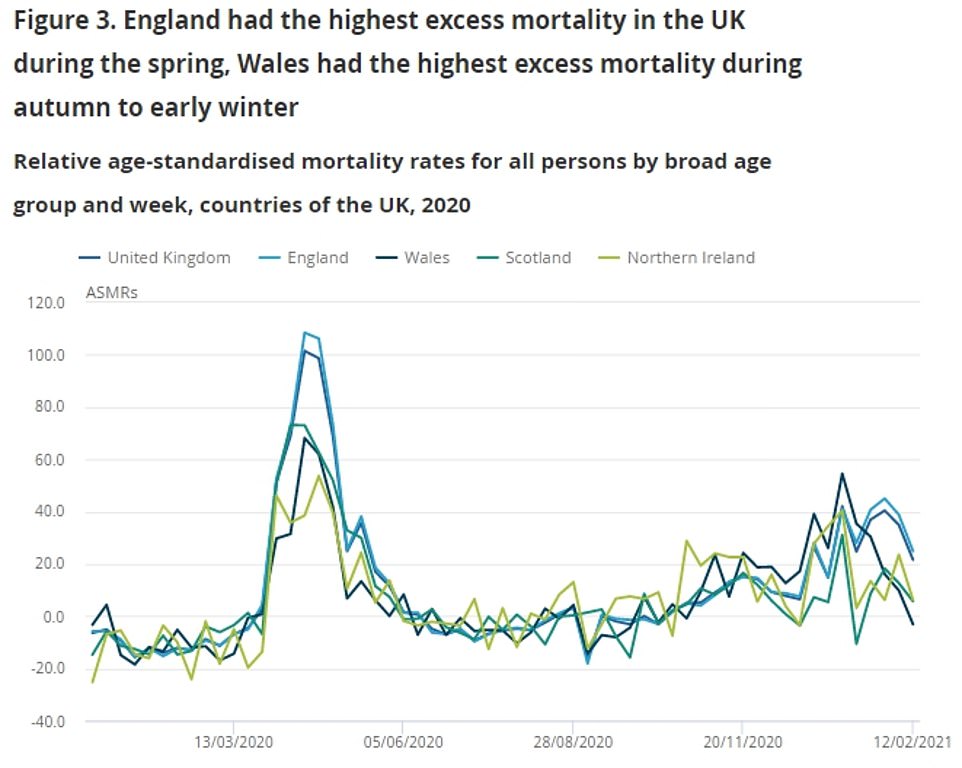 England had the highest excess mortality rate in Britain at the end of the first wave  (7.3 per cent). It was followed by Scotland (5.3 per cent), Wales (2.6 per cent) and Northern Ireland (2.2 per cent)

WHICH EUROPEAN COUNTRIES HAD THE HIGHEST EXCESS MORTALITY RATE AFTER THE FIRST WAVE?

The ONS has calculated the mortality rates for each European country up to June 26 using official sources.

It found Britain had the highest number of ‘excess’ deaths – fatalities that weren’t expected to occur at this time of year – followed by Spain and Belgium.

England had the highest excess mortality rate in Britain after the first wave of the pandemic (7.3 per cent), and Scotland had the second highest (5.3 per cent), the ONS report showed. They were followed by Wales (2.6 per cent) and Northern Ireland (2.2 per cent).

It is not clear why this may be the case, but experts think it could be linked to rapid successful lockdowns that suppressed the spread of other diseases such as flu which can trigger many deaths at this time of year.

The figures show how different parts of Europe experienced contrasting levels of mortality throughout 2020, with central and eastern European countries being worse hit in the second half of the year.

But they cut off at December 18, before the full impact of the second wave had been felt across the continent. Some countries are now facing a third wave amid stalling vaccine roll-outs.

The best way of comparing levels of mortality internationally is by looking at mortality rates – by local area, region and country – compared with the five-year average, the ONS said.

All-cause mortality avoids the problem of different countries recording Covid deaths in different ways, and also takes into account the indirect impact of the pandemic, such as deaths from other causes that might be related to delayed access to healthcare.

‘Only Bulgaria had a higher cumulative excess mortality rate for this age group by the end of 2020, with the UK and its constituent countries having excess mortality levels well above most other European countries.

‘This has been a pattern observed throughout 2020 since the Covid-19 pandemic began in March, showing that the impact of the pandemic in the UK has not exclusively affected those at the oldest ages. We are working to better understand the reasons behind this trend.’ 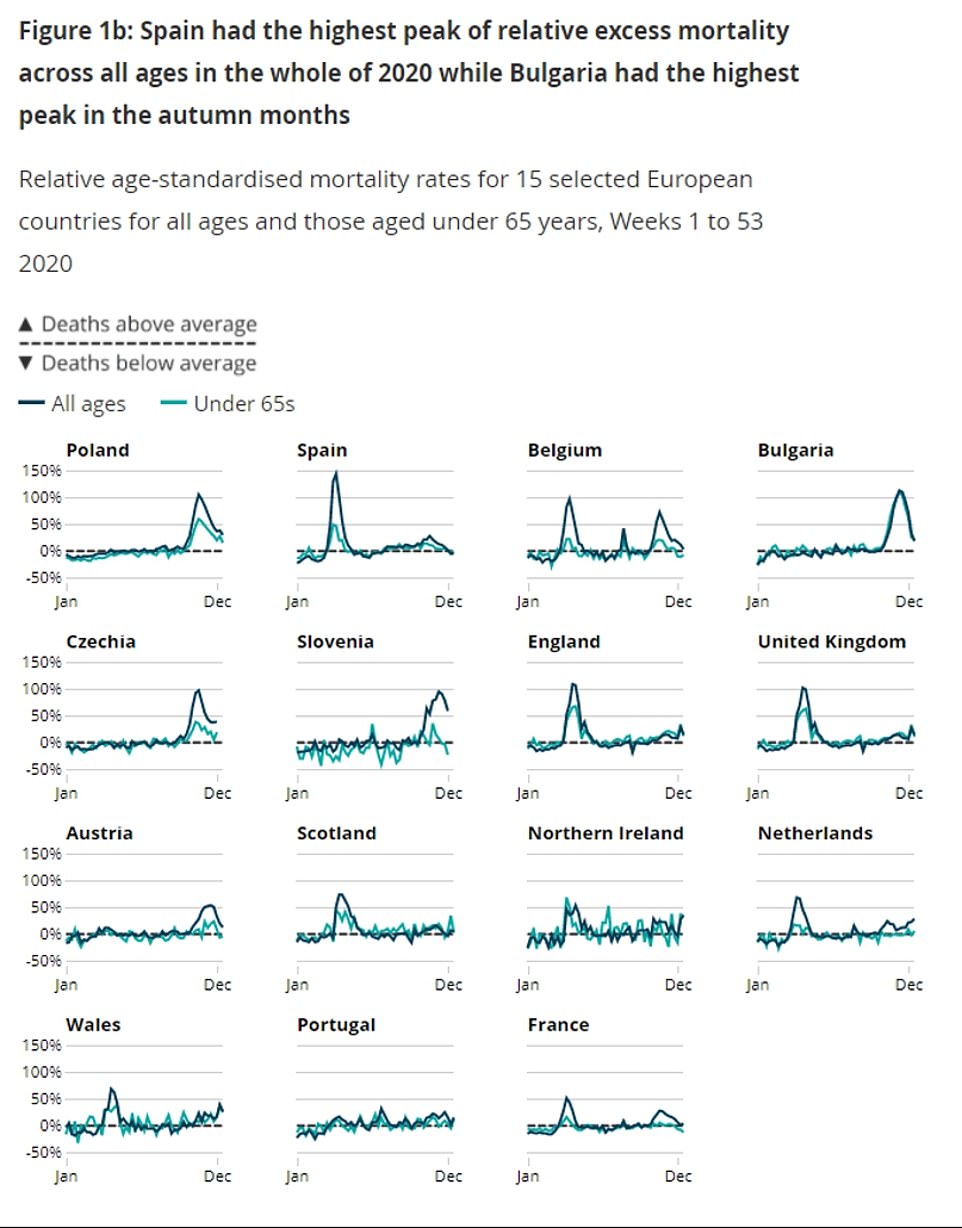 By the end of the analysis (December 18) Bulgaria had the highest excess death rate in Europe. But this was before the continent felt the full force of the second wave 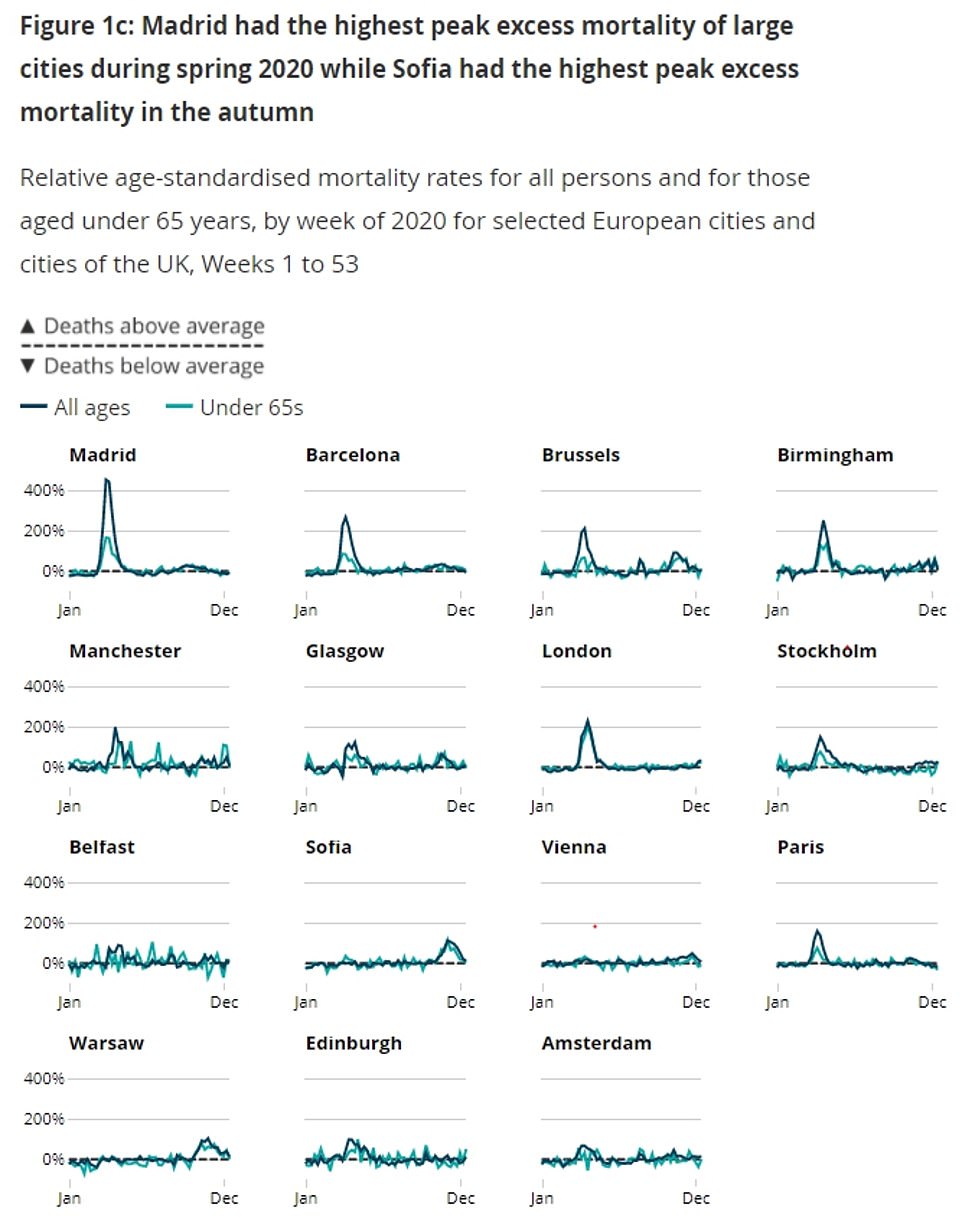