Covid: Fury as Queensland forces visitors to pay $145 per person for PCR tests to enter the state

Outraged Australians are calling for travellers to boycott Queensland after it was revealed visitors over 16 will have to pay $145 each for a PCR test to prove they are Covid-free to enter the state.

The Sunshine state will reopen for tourists once 80 per cent of its vaccine-eligible residents are double-jabbed – which could be as early as December 6.

But Annastacia Palaszczuk’s government is refusing to allow inbound travellers to be Covid screened with far cheaper – and fully approved – rapid antigen tests, meaning families will have to pay hundreds of dollars to cross Queensland’s border.

The new rules have sparked fury across the country as Aussies – including Queenslanders – slam the state government for keeping families separated and crippling the already-devastated tourism industry.

Dozens have flocked to social media to blast the move as they urge people to avoid travelling to Queensland until the plan is scrapped.

‘So people that have been waiting six months to see their family now have to wait longer because they won’t be able to afford to keep going to QLD if they have to pay for this utter b***s*** – that’s for sure,’ one person wrote.

‘Well done QLD Health, you have now ended little day or weekend trips across the border,’ another said.

‘And the prohibitive costs will be too much for many Queenslanders and will bring an end to some families’ Christmas plans and will be devastating for tourism. So much for the lie of vaccinations bring freedoms. We are not free!’

Should Australians have to get a PCR Covid test to go to Queensland with vaccination rates at 80%?

One woman from Queensland said the rule had destroyed plans for her family to travel interstate to see relatives.

‘Why the hell would I want to fork out $145 for a PCR test that is currently FREE when I can use something that is TGA approved and used worldwide that is 1/8 of the price,’ she said.

‘The QLD government is crying saying they want tourists but this is one way to squash that.

‘We are all vaccinated and wanted to see family in NSW but there is no way as a family of 7 we’re going to fork out that money to come back into our own state.’

Another said her family holiday was ruined because the entry fee was not feasible.

‘What a disgrace this state has become.’

Others simply posted ‘boycott Queensland’, while another said the fee was ‘ridiculous’ when TGA-approved tests could be purchased from pharmacies for $15. 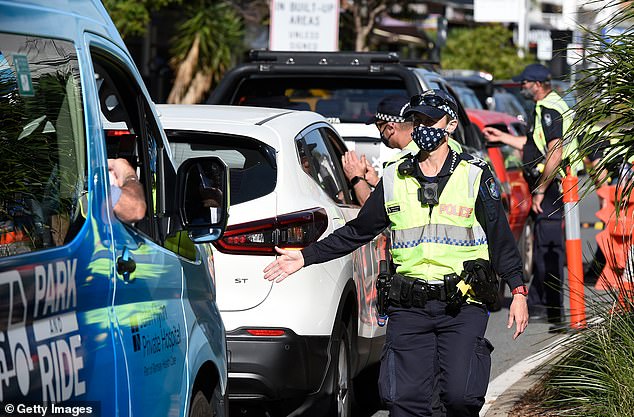 Another woman said her family have not been able to visit her mother-in-law in Tweed Heads, on the NSW border, for more than a year – which was now looking to be much longer.

‘Coughing up a large sum like this to be able to visit and get back home again is ridiculous,’ she said.

‘Our whole family is vaccinated.’

Health Minister Yvette D’Ath this week announced inbound travellers will have to fork out for the gold-standard PCR Covid test from a private clinic, with costs starting from $145 per person.

The insistence on the PCR tests – which will be required for anyone over 16 –  comes despite Queensland’s Covid roadmap stating  tests approved by the Therapeutic Goods Administration – such as the rapid antigen tests – would be sufficient.

There are a dozen different brands of rapid antigen tests – priced $7 to $20  – already  TGA-approved and available in chemists.

‘We don’t want to swap tests just because one might be cheaper,’ Ms D’Ath said.

Australians have flocked online to slam the new Covid testing rule, with many calling for visitors to boycott Queensland 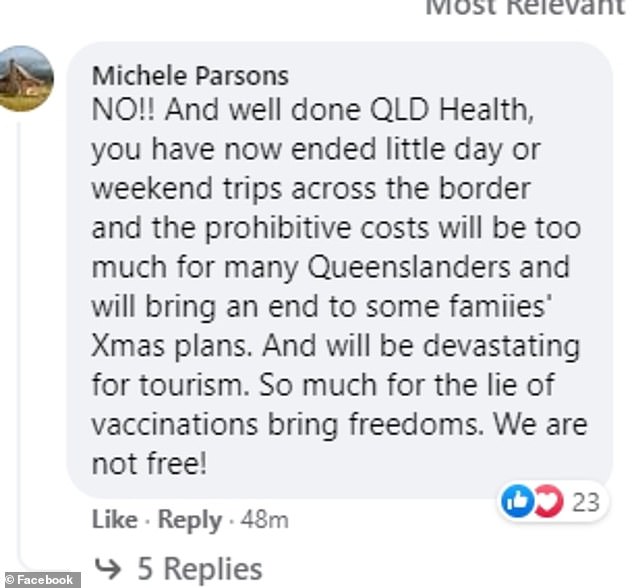 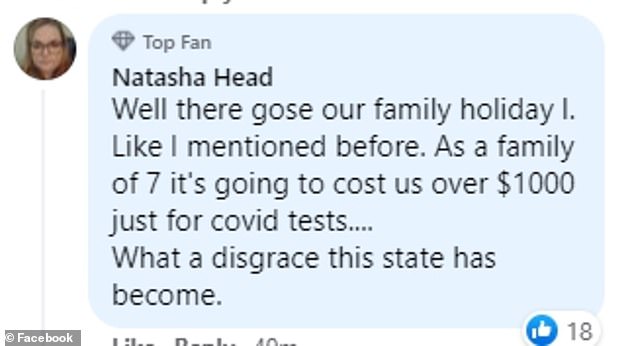 While foreign visitors to Australia must get a PCR test to enter the country, Queensland is imposing the cost on fellow citizens whereas other ‘open’ states like NSW and Victoria do not.

Acting chief health officer Peter Aitken said PCR tests should be used in conjunction with rapid tests – which are more effective when there was a higher number of Covid-19 cases in the community.

‘To put it roughly, rapid antigen tests are about 70 per cent as effective as PCR,’ Dr Aitken said.

‘Queensland currently has four active cases – we want to identify every case and not miss 30 per cent, so we will continue to use PCR tests at this stage.’

‘[With rapid antigen tests] you miss the early stages of the disease and the later stages of disease, which means you don’t detect Covid in people until they are much further into disease.’ 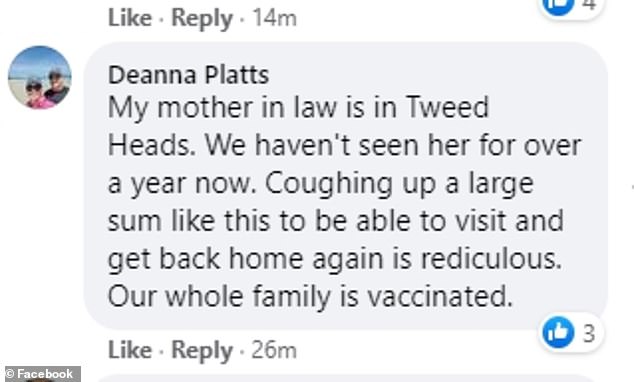 Ms D’Ath said the federal government should look at subsidising costs for the mandatory swabs through Medicare – putting further impost on non-Queenslanders to pay for the testing through taxes.

But opposition Leader David Crisafulli said the state government should foot the bill because it is their policy.

‘The state government should stop passing the buck and help get Queenslanders home – that test could be done by the state and paid for by the state,’ he said on Sunday.

Federal Health Minister Greg Hunt’s office also slammed Ms D’Ath’s suggestion, pointing out that Queensland had agreed to split the cost of Covid testing for people without symptoms since early in the pandemic.

‘The Commonwealth has spent over $1.87 billion on pathology testing throughout the Covid-19 pandemic, we would welcome Queensland announcing their investment into pathology,’ a spokesman said. 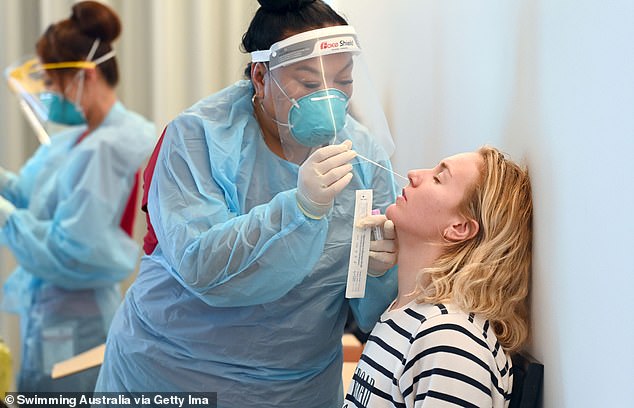 ‘It is surprise that Queensland is seeking to walk away from their responsibilities and their own decision, reducing their own expenditure on Covid safety.’

Queensland recorded no new Covid cases on Sunday, with latest figures showing 84.35 per cent of eligible residents have had one jab and 73.06 per cent are fully vaccinated.

Earlier this month, the state reopened its borders to fully-vaccinated NSW and Victorians residents although strict rules – including 14 days of quarantine and travel limitations – still apply.

The restrictions will be dropped when the 80 per cent double dose milestone is reached around mid-December.