The long-serving chancellor called for more ‘flexibility’ as she acknowledged flaws in a bureaucratic vaccine roll-out which has seen only 10 per cent of the population get a first dose of the jab.

She also took aim at state governors who she said had failed to implement either the letter or the spirit of ’emergency brake’ restrictions agreed with Merkel.

‘Perhaps we’re very perfectionist at times and want to do everything right, because obviously whoever makes a mistake always faces quite a lot of public criticism,’ Merkel said in an hour-long TV interview with ARD on Sunday.

‘But there needs to be flexibility too. That, I believe, is an attribute that we as Germans perhaps need to learn a little bit more, alongside our tendency towards perfectionism.’ 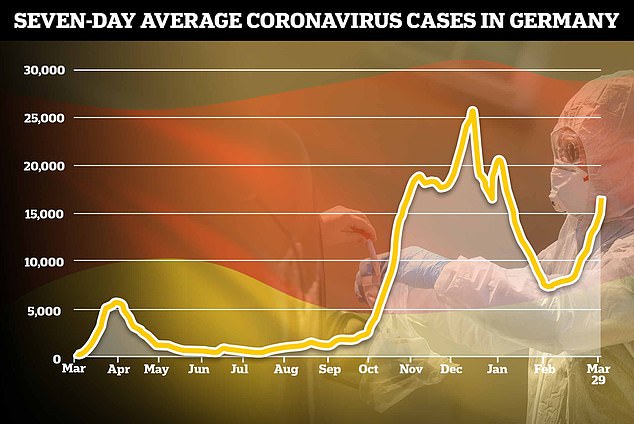 The third wave in Europe has sent Germany’s infection rate to its highest since mid-January, but Merkel faces a struggle to implement new restrictions 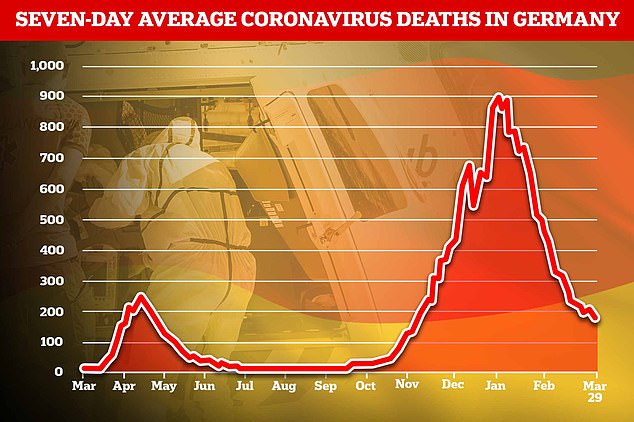 Germany has handed out 8.6million first doses compared to more than 30million in Britain, and only marginally more second doses despite the long intervals in the UK.

As an example of ‘perfectionism’, Merkel cited the need for vaccine centres to have lists on hand of who could get spare shots at the end of the day.

But she predicted that vaccinations would speed up when supply increases and family doctors start handing out jabs next month.

She also insisted that she stands by her pledge to offer every adult a vaccine by the end of the summer.

With recent opinion polls showing a slump in support for her ruling Christian Democrats (CDU), Merkel – who will leave office after September’s election – urged Germans not to become overwhelmed by despair.

‘We have a difficult situation,’ she said. ‘But look at our neighbors. With the exception of Denmark they are all grappling with the same problems, in part from a much more difficult position.’

‘We also need to voice a bit of courage and strength,’ she said.

Merkel has faced a struggle to bring in new restrictions, despite agreeing with state leaders that areas with more than 100 new cases per 100,000 people in a week would face tough new measures.

Under Germany’s federal system, states have the final word on enforcing the rules, and some have resisted Berlin’s calls for tougher measures.

The small state of Saarland plans to end its lockdown after Easter and open leisure, sports and entertainment facilities to those who test negative.

‘If we are creating the impression that we can still open things – that is not the order of the day at the moment,’ Merkel said.

‘We have to take the appropriate measures very seriously. Some states are doing it, others are not yet doing it.’ 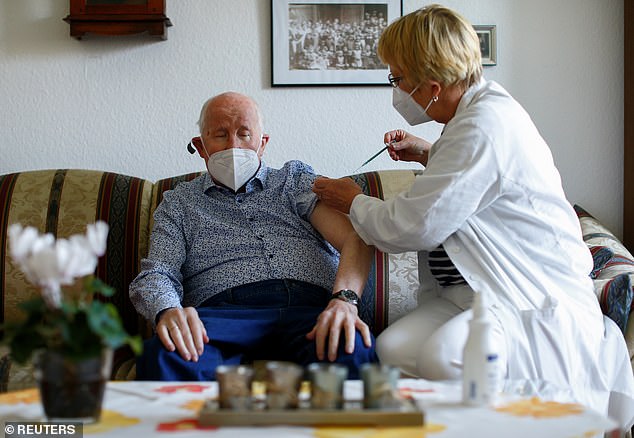 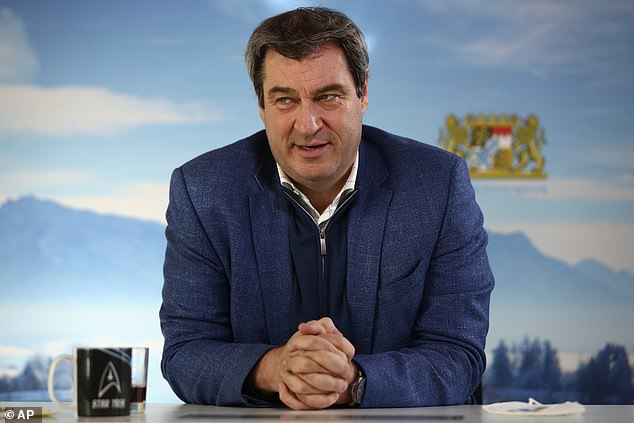 Bavarian leader Markus Soeder (pictured), a possible contender for Merkel’s job, said he would back the chancellor if she sought to impose tougher nationwide rules

Also among the states Merkel called out was North Rhine-Westphalia, which is run by CDU chairman and possible Merkel successor Armin Laschet.

Merkel said she might seek legislative backing from the Bundestag if states are not willing to enforce the rules, adding that curfews could be implemented.

Markus Soeder, the governor of Bavaria and another hopeful to succeed Merkel after the September 26 election, voiced support for stronger nationwide rules.

‘If the chancellor were to take the initiative at the national level to change the law and set clear guidelines, she would have my support,’ he told ARD.

Merkel and the state leaders had also agreed to a near-total shutdown over Easter in which even supermarkets would be closed for four out of five days.

But she reversed that decision two days later, asking for forgiveness after acknowledging that the plan was impractical.

The UK variant of Covid-19 is being blamed in part for a third wave which experts fear could be the worst yet in the country of 83million.

Health minister Jens Spahn said on Saturday the whole country needed ‘another ten, 14 days of real shutdown of our contacts and mobility’ to bring cases under control.

With patience running thin, support for Merkel’s conservative bloc has plunged to new depths just six months ahead of the general election.

A new poll on Sunday placed the CDU-CSU alliance on just 25 per cent, well below their 2017 performance of 32.9 per cent which was already a historic slump.