Germany will introduce new measures to curb the spread of the coronavirus including limiting private gatherings for vaccinated people to a maximum of 10 people before New Year’s Eve, Chancellor Olaf Scholz said on Tuesday.

The country has also closed nightclubs and banned spectators from major events including football matches from December 28 in a bid to slow the spread of the Omicron variant.

‘This is not the time for parties and cosy evenings with lots of people,’ Scholz said after talks with Germany’s regional leaders.

‘We cannot and must not close our eyes to the next wave. Corona won’t take a Christmas break,’ he said, adding it was only a matter of weeks before the Omicron variant became dominant in Germany.

The new restrictions mark one of the first key decisions for Scholz since he came to power after Angela Merkel stepped down after 16 years.

Although the steps already introduced, aimed mainly at encouraging people to get vaccinated, were having an effect, a fifth wave threatened Germany, especially due to the omicron variant, Scholz told reporters.

Germany will introduce new measures to curb the spread of the coronavirus including limiting private gatherings for vaccinated people to a maximum of 10 people before New Year’s Eve, Chancellor Olaf Scholz said on Tuesday 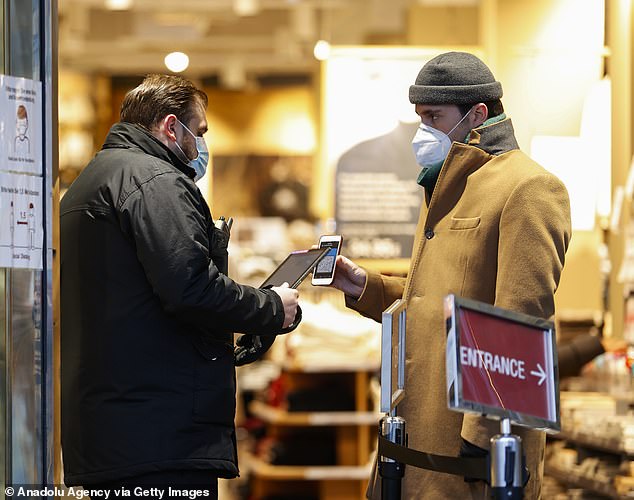 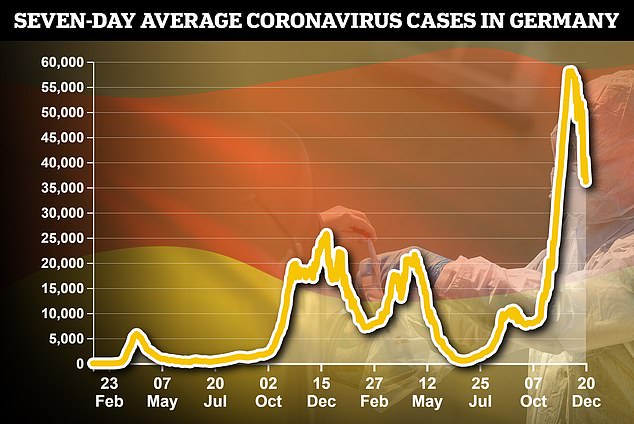 Although the steps already introduced, aimed mainly at encouraging people to get vaccinated, were having an effect, a fifth wave threatened Germany, especially due to the omicron variant, Scholz told reporters

‘It is only a matter of weeks before omicron is dominant here,’ said Scholz.

Scholz said the government decided to wait until after Christmas to implement new national restrictions because family-focused holidays such as Christmas and Easter ‘have not proven to be major drivers of the pandemic.’

But he said restrictions on New Year’s celebrations are necessary to keep Germany’s health system from being overwhelmed by COVID-19 cases.

The restrictions, agreed on by Scholz and the premiers of Germany’s 16 federal states, came just hours after the country’s Robert Koch Institute for infectious diseases urged ‘maximum contact restrictions’ be imposed at once until mid-January.

They had also recommended restricting travel to what was absolutely necessary.

One state, Hamburg, already moved on Tuesday to impose such restrictions starting on Christmas Eve. There will be a 10-person limit on private meetings and dance events will be banned, effectively closing clubs, while restaurants and bars will have to close at 11 pm. – except on New Year’s Eve, when they can open until 1 am.

Restrictions already in place target mainly the unvaccinated, with proof of vaccination or recovery required to enter non-essential stores and restaurants. Also, the sale of New Year fireworks has been banned nationwide.

Scholz said the German government is also trying to speed up its booster vaccine campaign, aiming to give out an additional 30 million shots by the end of January by keeping some vaccination centers open over the holidays.

Authorities have scrambled to speed up the booster campaign, with an average of around a million vaccine shots administered per day over the past week, the highest level of the pandemic so far.

But they remain dissatisfied with the number of people who have been vaccinated in the first place – the proportion of the population that has received a full first round of vaccine stands at 70.4 per cent, short of the minimum 75 per cent the government aimed for. So far, 32.6 per cent have received boosters. 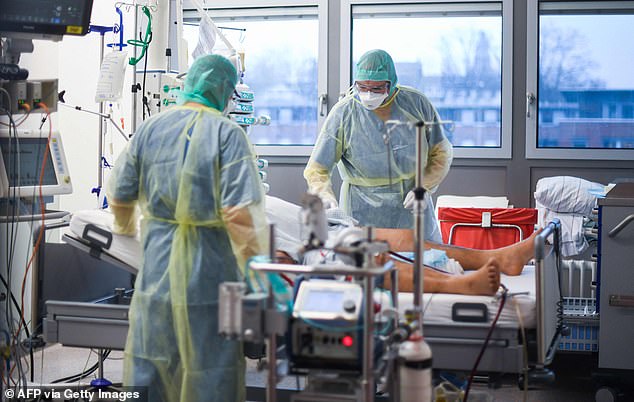 Experts have warned that hospitals could face a double-whammy of a wave of seriously ill patients and massive staff shortages due to breakthrough infections among doctors and nurses. Pictured: Medical staff assist a patient infected with the Covid-19 coronavirus in the Covid-19 intensive care unit of the University hospital in Bochum on December 16 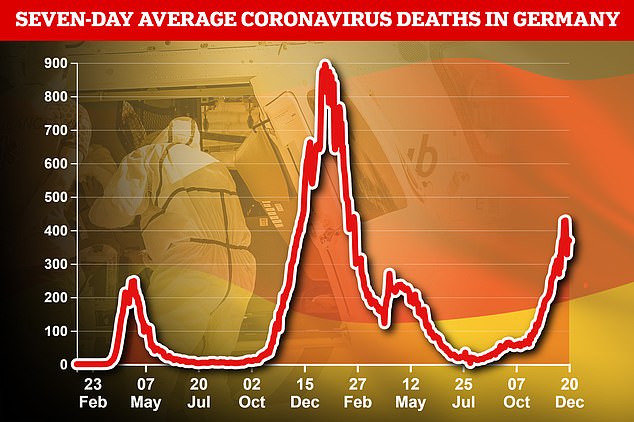 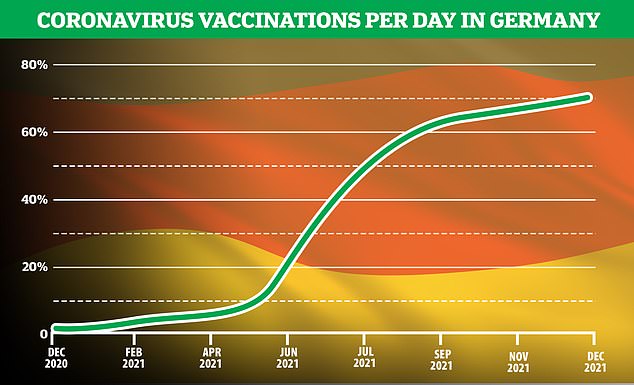 Germany’s infection rate is, for now, drifting downward slowly. On Tuesday, the disease control center recorded 306.4 new cases per 100,000 residents over the past seven days, down from 375 a week earlier, with 23,428 cases reported over the past 24 hours.

However, Health Minister Karl Lauterbach has warned that Germany faces ‘a massive fifth wave’ because of omicron, which he says can’t realistically be prevented. All the same, he said on Sunday that there won’t be a lockdown before Christmas.

Experts have also warned that the Omicron variant could cause disruption to emergency services as well as electricity and water supplies. Hospitals could face a double-whammy of a wave of seriously ill patients and massive staff shortages due to breakthrough infections among doctors and nurses.

Scholz will meet state premiers again on January 7 to discuss the COVID-19 situation.

The disease control center, the Robert Koch Institute, said Monday that people who have recovered or had a full first round of vaccine now face a ‘high’ risk of infection, while it is ‘moderate’ for those who have received a booster. It said the risk is ‘very high’ for the unvaccinated.

It also emerged today that Germany’s STIKO vaccine authority shortened the recommended period between a second coronavirus shot and a booster to three months from six, reflecting the increasing presence of the highly infectious Omicron variant. 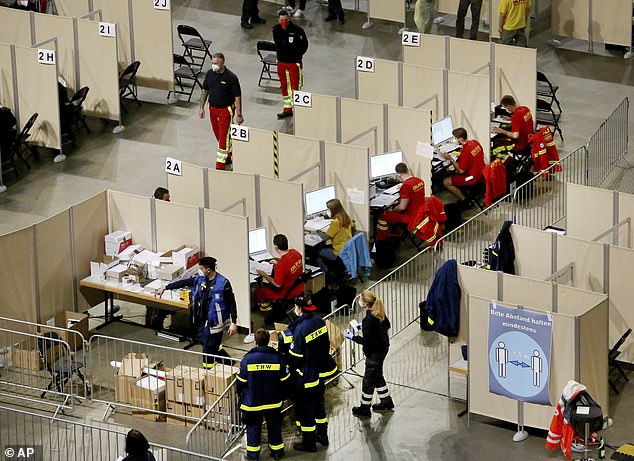 Vaccination lanes with 30 registration counters are available to those wishing to be vaccinated in the Koenig-Pilsener-Arena in Oberhausen, Germany, on Sunday

The authority said anyone over age 18 should have a booster using an mRNA vaccine three months after completing a two-shot course of COVID-19 vaccines.

STIKO previously recommended anyone fully vaccinated with an mRNA vaccine should wait six months after their last shot. For the one-shot Johnson & Johnson vaccine, that period remains four weeks.

STIKO also recommended that anyone over age 12 who was infected with the coronavirus should receive a shot at least three months after they recovered. Previously the recommendation was six months.

The elderly or people with pre-existing conditions should be prioritised for booster shots, the committee added.

While data remains limited, half a dozen laboratory studies have shown that an initial course of COVID-19 vaccines is not enough to halt infection from Omicron, but a booster may help.

Protests have erupted across Germany against restrictions on the unvaccinated and plans to make vaccinations compulsory for some groups. Demonstrations have recently become more violent, with increased attacks on doctors, politicians and journalists.

Vaccinations will become mandatory from March 16 for people working in hospitals, nursing homes and other medical practices.