Mothers-to-be who get coronavirus are more than twice as likely to end up in intensive care as infected women who aren’t pregnant, a study has found.

University of Birmingham scientists also found pregnant women with Covid were nearly three times more likely to experience a stillbirth, but they were slightly less likely to die with the virus than women who weren’t expecting.

The World Health Organization-funded study analysed data from more than 41,000 pregnant women in three dozen countries, including the UK, US and China.

The research may put pressure on the NHS to change its advice, which currently says there’s no proof of a higher Covid risk for pregnant women.

It backs up older studies which suggested the likelihood of developing Covid symptoms was lower in pregnant women – potentially because they tend to have a younger average age than the general public – but the risk of severe illness was higher if they did get ill.

Health chiefs advise women to be extra cautious about Covid if they are pregnant or planning to have a baby, and mothers-to-be are on the ‘clinically vulnerable’ list, but there is not much hard evidence on specific risks they face.

An NHS spokesman said today it was generally ‘very unlikely’ that a pregnant woman would become seriously unwell with Covid and that the health service’s advice is ‘constantly under review’.

Pregnant women who catch coronavirus are not more likely to have a miscarriage or stillbirth or to deliver a baby with a low birth weight, a study has found.

The research included 4,004 pregnant women in the UK and US and found Covid did not increase the risk of a pregnancy going wrong.

Advice for mothers-to-be during the pandemic has been cautious, with the NHS putting them in a ‘clinically vulnerable’ group. But there has been a lack of quality evidence to prove whether they are or aren’t put in extra danger by Covid.

Children seem to barely get sick with the virus unless they already have severe health problems.

And the study, by Imperial College London, suggests the same is true of unborn babies and newborns. No babies died of Covid in the study and only around 10 per cent of them tested positive after birth.

Although women were more likely to die if they had Covid than if they didn’t, this risk was the same as for a non-pregnant woman, suggesting their baby was not a factor.

Premature delivery was more likely in the women testing positive for coronavirus, the researchers found, but this appeared to be because doctors were deciding to induce labour because they were over-cautious about Covid.

Scientists behind the latest research reviewed data from 192 studies carried out in hospitals and other healthcare settings since April 2020.

They analysed the figures to identify the risks of falling seriously ill with Covid for pregnant women.

Their paper was published today in the British Medical Journal and has been peer-reviewed, meaning other experts have had a chance to check the numbers.

But scientists warned some of the data used for pregnant women who didn’t have Covid was from before the pandemic.

At this time hospitals were not overwhelmed by patients and people were not as concerned about visiting hospitals, which the researchers said could affect the data.

The results showed 616 out of 34,035 pregnant women infected with the virus were admitted to intensive care (1.8 per cent).

When the numbers were adjusted to account for differences between the groups, the scientists said that the risk of admission was 2.13 times higher in the pregnant group.

And when they looked at intensive care admission for women with no Covid and no pregnancy, the rate was 18.6 times lower than it was for pregnant women with Covid.

There was not, however, a comparison of the risk of being admitted to a general hospital ward.

The researchers calculated the risk of dying of Covid was four per cent lower for pregnant women than non-pregnant women. It is not clear why.

Pregnant women were also twice as likely to be admitted to need a ventilator than similar-aged women with Covid who were not expecting, the study said.

Separate data also showed nine of 1,039 (0.9 per cent) of births to pregnant mothers with Covid were stillbirths, compared to 26 of 4,755 (0.5 per cent) among those who hadn’t caught the disease. The study calculated a 2.8-fold increase in risk.

A top WHO expert behind the study said mothers should be ‘reassured’ that the risk to their babies from Covid was ‘very low’ in spite of the findings.

And an expert in newborns from Imperial College London also said it was ‘reassuring’ that the number of stillbirths remained low in mothers with Covid.

A blood test could identify coronavirus patients who are more likely to fall victim to the disease, an analysis has found.

Covid infections spark the release of cytokines into the bloodstream, tiny substances that fire-up the immune system to attack invaders.

Normally they help to ward off diseases but, when their levels get too high, they trigger a ‘cytokine storm’ which can lead to organ damage and death.

Imperial College London researchers have identified one – dubbed GM-CSK – that was at high levels early on in patients that later suffered severe disease.

Doctors said this could provide an early warning for which patients are more at risk and pave the way for new treatments to combat the disease. But they said more research and tests were needed.

When cytokines reach very high levels they can trigger a ‘storm’, which is when inflammation can lead to damage to vital organs and death.

Professor Shakila Thangaratinam, a maternal health expert who was a lead author on the study, told MailOnline: ‘Pregnant women with Covid have increased risk of death and admission to ITU than other pregnant women without Covid.

‘[But we] need to be careful with the interpretation because some of the data came from comparisons during vs before pandemic, when there were also changes in health systems. Also all of the deaths are not necessarily due to Covid.’

She added that there was no significant difference in the number of deaths recorded between pregnant and non-pregnant women with the virus, suggesting the virus had not raised their risk of death.

Dr John Allotey, from the WHO’s Collaborating Centre for Global Women’s Health and first author of the study, said: ‘Pregnant women should be considered a high risk group, particularly those identified to have risk factors, for severe Covid-19 based on our findings.

‘Mothers should also be reassured that the risks to their babies is very low.’

NHS Digital told MailOnline evidence currently suggested that pregnant women are not at greater risk from the virus than the rest of the population.

‘Pregnant women appear no more likely than the rest of the population to catch coronavirus and it remains very unlikely that someone who is pregnant will become seriously unwell,’ they said.

‘However, it is crucial that women and maternity services alike continue to take every possible step to look after the health and well-being of both mum and baby, including following social distancing guidelines.

They added: ‘All Covid-19 related advice on the NHS website is constantly under review and we will continue to ensure advice relating to pregnancy and coronavirus reflects any new robust evidence that is published.’

But Dr Edward Morris, the president of the Royal College of Obstetricians and Gynaecologists, told MailOnline evidence showed women either in their third trimester of pregnancy or who suffer from pre-existing medical problems were at a higher risk from Covid. 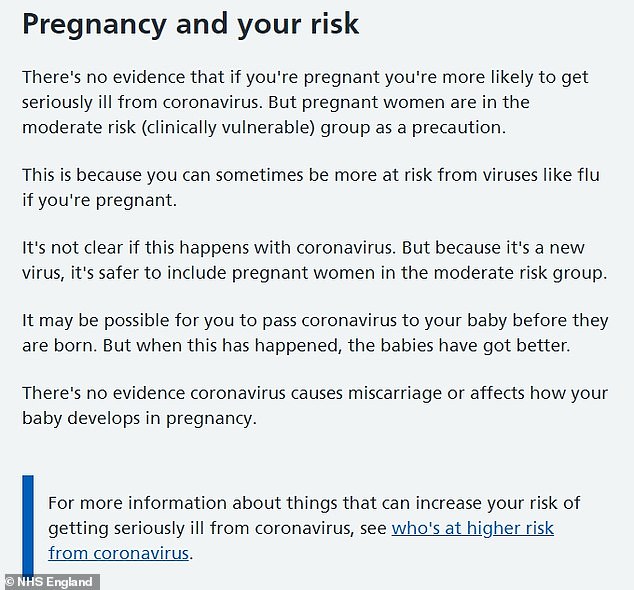 ‘We encourage pregnant women to continue to pay particular attention to social distancing measures and good hygiene, and contact their maternity team if they have any concerns about their or their baby’s health.’

‘About one in three of the babies in this study born to mothers with Covid-19 were admitted to a neonatal unit, and about one in six were born pre-term – both of which are higher than would be expected.

‘It is reassuring to see that neonatal deaths and stillbirths were both low in mothers who had Covid-19 in pregnancy in this study.

‘More research is needed to understand if there are any longer term effects on babies exposed to SARS-CoV-2 in early life.’