In the TeenCOVE study, including children ages 12 to 17, the two-dose shot was 96 percent effective.

The results are in line with the 94 percent efficacy Moderna showed among adults in its December 2020 trial that led to emergency use authorization from the U.S. Food and Drug Administration (FDA).

However, despite the promising findings – and with Pfizer-BioNTech’s coronavirus vaccine expected to be authorized soon among children aged 12 to 15 – some parents are reluctant to get their children vaccinated.

A new poll recently found that fewer than one-third of parents intend to get their sons and daughters immunized as soon as a shot is authorized and more than a quarter have no plans to do so. 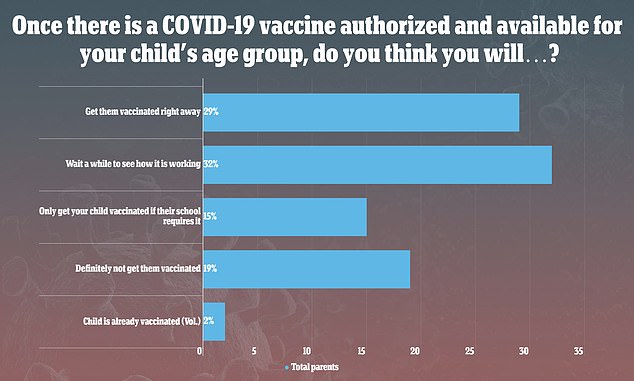 Moderna’s study included 3,235 adolescents from ages 12 to 17 enrolled at sites across the U.S.

‘We are pleased to report this morning an interim update to our TeenCOVE study,’ Moderna CEO Stéphane Bancel said during an earnings call on Thursday.

Side effects were mild or moderate with the most common being pain at the site of injection, similar to adults in the clinical trial last year.

Other common symptoms were fatigue, headache, muscle pain and chills, but no serious side effects were reported.

In a press release, the company said it is including to collect data and is in discussions with the FDA about applying to expand its emergency use to teens.

Moderna added that its study looking at COVID-19 vaccines among children ages six months to 11 years, known as KidCOVE, is ongoing.

Along with the promising results, the FDA is expected to authorize Pfizer-BioNTech’s coronavirus vaccine for 12 to 15-year-olds by next week,

On Tuesday, President Joe Biden announced that if the FDA does in fact approve the vaccine for adolescents next week, the U.S. is ready to start administering ‘immediately.’

But many parents are not as enthusiastic about vaccinating their children.

In a new poll, conducted by the Kaiser Family Foundation, parents were asked if they would get their child immunized once a COVID-19 vaccine is authorized and available for their child’s age group.

Only about three in 10 parents – 29 percent – of children under 18 said they would get their child vaccinated ‘right away.’

Willingness to get their children vaccinated immediately grew as the child age increased with just 24 percent with a kid under age five saying they would get their child vaccinated as soon as possible compared with 31 percent who had children ages 16 to 17.

Meanwhile, one-third, 32 percent, of mothers and father surveyed said they wanted to wait and see how the vaccine worked before getting their child immunized.

Conversely, the share of parents who said they wanted to wait was highest among those with young children with 39 percent planning to delay the shot compared to 24 percent of parents with 16-to-17 year-olds 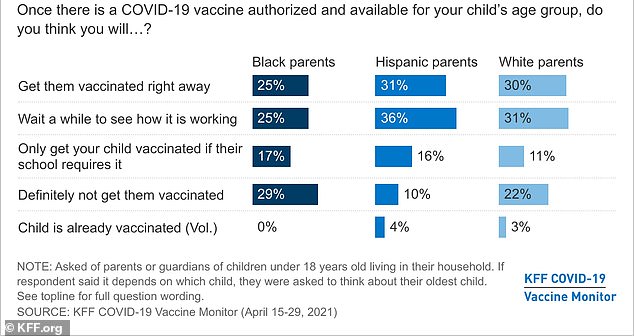 Black and white parents were more likely than Hispanic parents to say they definitely will not vaccinate their children, the poll found

The poll also found 15 percent only plan to vaccinate their children if the school requires it and 19 percent said their child will definitely not be getting vaccinated.

Across racial and ethnic groups about half of parents said their child will be immunized right away including 31 percent of Hispanic parents, 30 percent of white parents and 25 percent of black parents.

Meanwhile, 29 percent of black parents and 22 percent of white parents said they will definitely not immunize their child compared to 10 percent of Hispanic parents.

Dr Sean O’Leary, a pediatrician in Denver, told The New York Times that increasing access to the vaccine will help persuade hesitant parents.

‘We have to make the vaccine available in as many places as possible.’

‘If parents and patients are in the pediatrician’s office and the doctor can say: “Hey, I’ve got it”  that may be enough of a nudge for them to say: “Let’s go ahead and do this.”‘