A no-nonsense cop has been praised for the way he handled lockdown protests in Bankstown, empthasing with residents and telling them that he is also struggling with government directives.

Demonstrations took place across Sydney on Saturday following Premier Gladys Berejiklian’s announcement that restrictions would be tightened to stem the spread of the highly infectious Delta variant.

Footage of one protest in Bankstown in Sydney’s southwest – where residents are enduring the toughest lockdowns in the the state – emerged showing a police officer attempting to reason with attendees.

‘We are sick of this lockdown rubbish. But this rubbish here [the protests] doesn’t help,’ the cop said.

He warned that the likely outcome of protesting would be increased public scrutiny and a deployment of even more police officers to contain crowds and civil unrest in the coming days.

‘The government has put in rules that we have to enforce… we’re as over it as you are,’ he continued.

‘I understand your frustrations, I’ve got family that are struggling as well. It’s rubbish.’

Ms Berejiklian introduced particularly tough restrictions on residents in the local councils of Fairfield, Liverpool and Canterbury on Saturday in an attempt to stem the spread of Covid in the area.

Authorities are reporting disproportionately high daily cases in those areas, with 79 of the 105 cases on Sunday hailing from the three locked-down local government areas.

The rest of Greater Sydney is subject to lockdown orders too, and chief health officer Dr Kerry Chant maintained that unlinked cases of transmission are still occurring in metropolitan Sydney.

Protesters directed their anger at Ms Berejiklian chanting ‘Freedom, Freedom’, ‘No to the vaccine’, and ‘P**k off Gladys’ as they marched through Paul Keating Park.

The rally organised over social media was expected to attracted a thousand strong crowd but the smaller numbers that turned up from the outset just after 3pm found themselves outmanned by police. 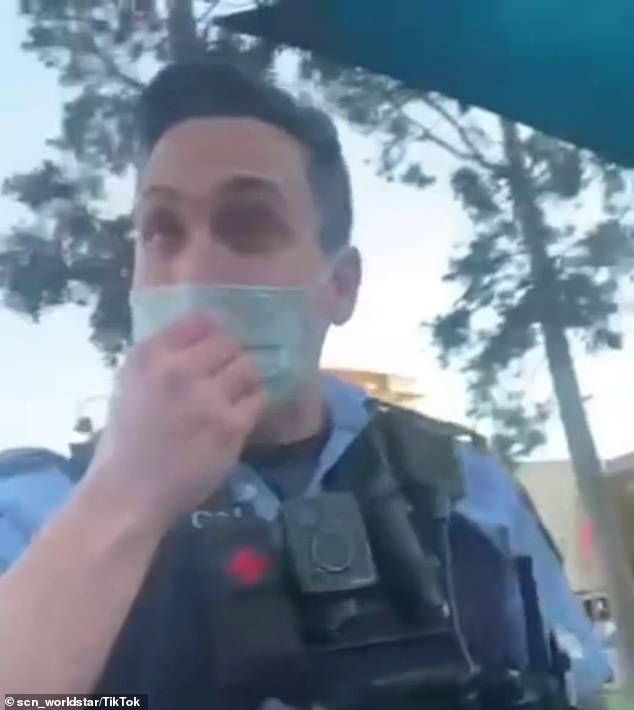 A no-nonsense cop has been praised for the way he handled lockdown protests in Bankstown, empthasing with residents and telling them that he, too, is struggling with government directives

One Bankstown local said the protesters were furious that already severe lockdown restrictions in the southwest were going to be toughened.

He said those in Sydney’s southwest felt they were being unfairly targeted by the government.

The cop in the Tik Tok video acknowledged that those present did have a right to protest in Australia. 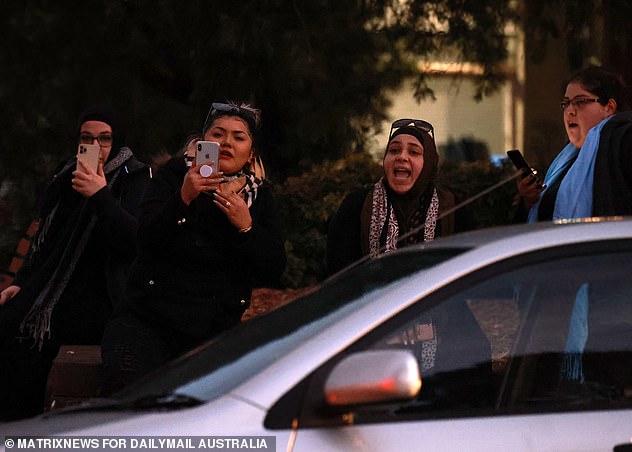 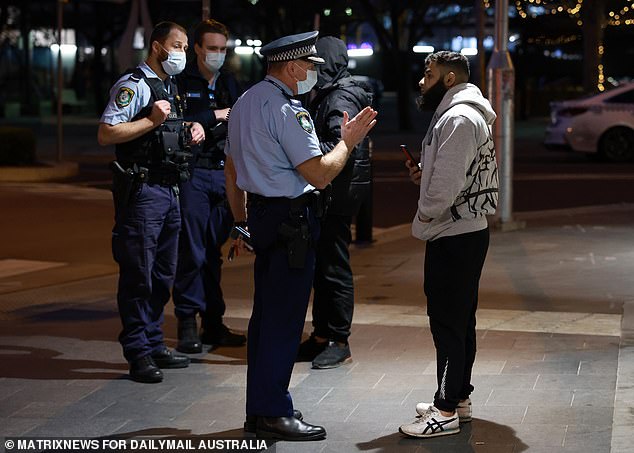 But he pleaded with the public to have some common sense about the matter, stating that ‘when there’s rules about gatherings, [protests] don’t help’.

He was then directed to another crowd, who were becoming more rowdy. As he parted ways with the group, they thanked him for taking the time to discuss the matter with them and for ‘doing his job’ properly.

‘Spread the word, anyone getting out their phones and hanging around is just egging them on more,’ he said, pointing to the rowdier group of people.

‘Some of them are probably going to be silly and push a police officer or something, and it’s going to get worse. We don’t want to lock people up.’

Footage of the conversation has since gone viral, with dozens of people declaring their ‘respect’ to the officer for being so honest.

‘This guy just said it like it is… he’s a decent cop.’ 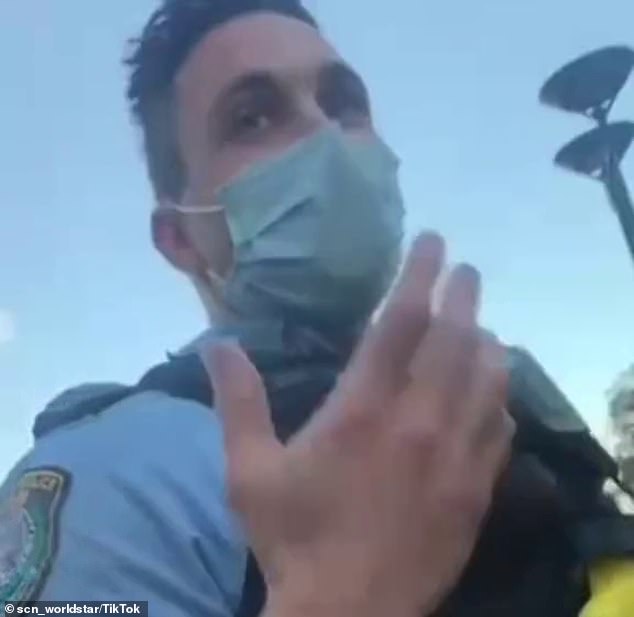 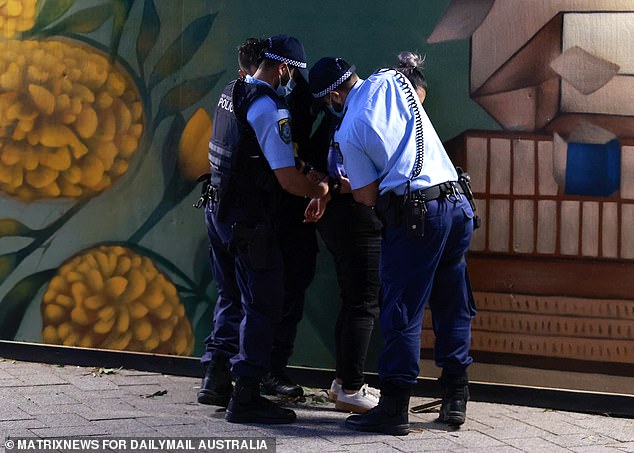 Others said he provided a blueprint to other officers on ‘how to police’ distressed people.

On Sunday, Ms Berejiklian revealed that announcing the harsh restrictions on the three councils was ‘the most difficult day’ she’s had in her role as premier. 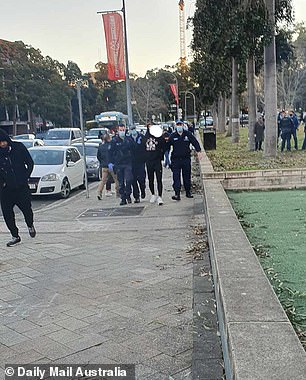 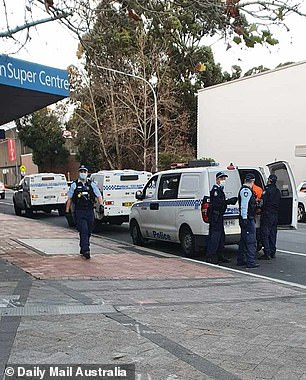 But she felt it was the only way to keep people safe and reduce the risk of transmission after the data proved they’re ‘still not managing to get the curve of transmission to come down’.

The 810,000 people living in those regions were initially told they cannot leave their suburbs even for work unless they’re employed in healthcare, aged care or emergency services until at least July 30.

Any essential employees who are permitted to leave their suburbs for work are subject to the same restrictions previously in place, namely receiving a negative Covid test every three days.

‘I can’t remember a time when our state has been challenged to such an extent,’ Ms Berejiklian said.

‘Not a single one of these decisions was taken lightly.’ 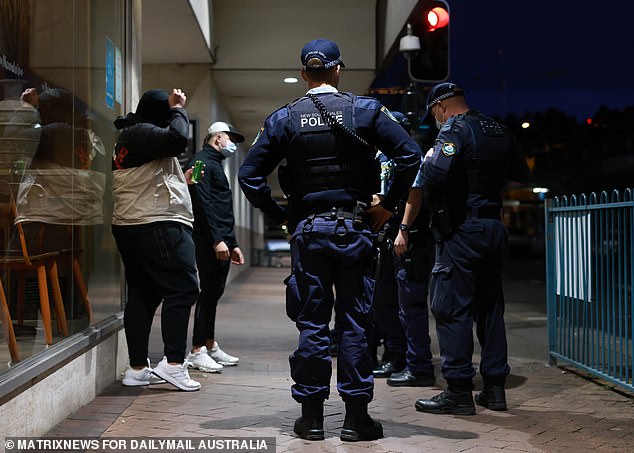 Lockdown restrictions for three LGA’s in Sydney’s south-west have been toughened (pictured: protesters in Bankstown on Saturday)

The announcement sparked frenzied calls to authorities and confusion over other industries which have otherwise been deemed essential.

In response, Ms Berejiklian’s team amended the criteria late on Saturday night, extending the parameters to include people working at garden centres, bottle shops and factories.

Delivery drivers, and people who work at supermarkets, newsagents or are required to maintain utilities like gas, electricity, waste management or water are also permitted to leave their locked-down suburbs for work.

Non-essential construction work is still off limits for at least two weeks.

M said the ban on construction work was particularly devastating for him and many of his friends.

‘Now I’m out of work for two weeks. Whose going to pay my rent or the $800 school fees for my two kids. Is the government going to pay that?’

‘I have two elderly parents and I can’t even visit them to make sure they’re looked after.

‘Australians need to get together and protest this. Stand up to the government,’ he said. 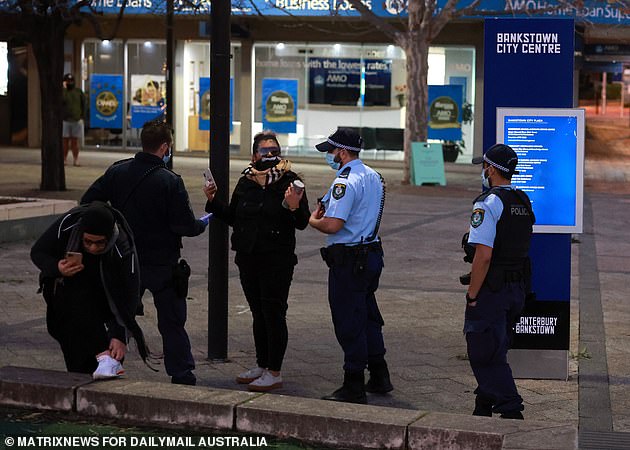 Police talking to locals in Bankstown on Saturday evening (pictured)