Covid UK: Thousands of people may have self-isolated unnecessarily after being ‘pinged’ by app

Thousands of Britons may have self-isolated for no reason because the NHS Covid app was incorrectly set to ‘ping’ contacts five days before someone tested positive, it was claimed today.

The controversial software — which isn’t legally enforceable — was designed to curb the spread of Covid.

Health Secretary Sajid Javid announced last month the NHS app was being tweaked in an effort to curb the ‘pingdemic’, which left supermarket shelves empty and pubs shut due to staffing shortages.

The app now only alerts people who came into contact with an infected person 48 hours before they tested positive. Before, it trawled through five days of Bluetooth data.

But a Whitehall whistle-blower has told The Guardian the app should only ever have looked as far back as two days, in line with official guidance and NHS Test and Trace rules.

The NHS Covid app ‘pings’ people who have been within two metres of an infected person for 15 minutes or more. But a Whitehall whistleblower revealed the app was issuing self-isolation alerts to people who had been in contact with a positive case five days before they tested positive instead of two, leading thousands to needlessly isolate 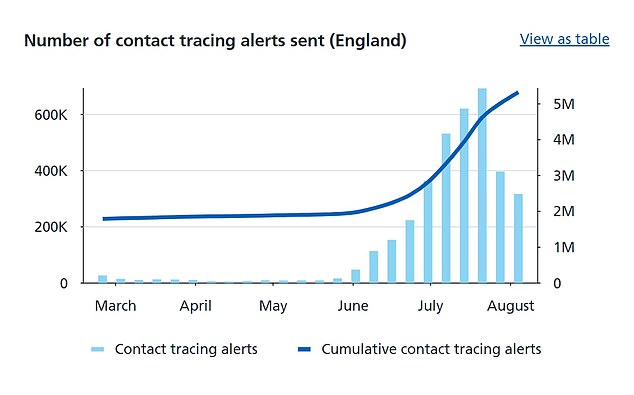 NHS figures the number of alerts sent out by the app each week began to drop at the end of July, after peaking at nearly 700,000 earlier in the month 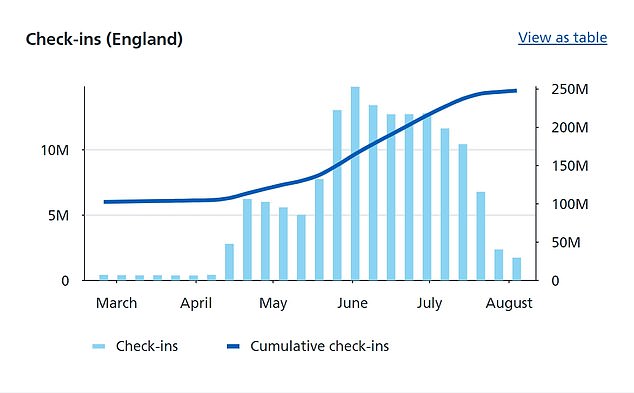 The drop-off in the number of venue check-ins using the app was similar during the week, falling 26 per cent from 2.3million to 1.7million

How does the NHS Covid app work?

The NHS Covid app was created to help control the spread of the coronavirus.

It uses Bluetooth to log the amount of time someone spends near other people who have the app and the distance between people.

Anyone who has been within two metres of an infected person for more than 15 minutes is told to self-isolate for 10 days from the day they were in contact with that person.

It is not a legal requirement to follow the isolation rules on the app, but the Government says adhering to it is key to limit the virus from spreading.

This is unlike Test and Trace, as it is illegal to leave the home when identified as a close contact of an infected person by that team.

But rising numbers are deleting the app after it sent out record self-isolation orders last month.

They said the error was reported to former Health Secretary Matt Hancock before he stepped down in the wake of his affair — but he never publicly revealed the mistake.

The app, which keeps users anonymous, caused mayhem across the country before it was tweaked.

The source said: ‘The standard definition of a contact in all the scientific and public stuff from Public Health England and NHS Test and Trace is someone who has been in contact from two days before they have symptoms.

‘And if they do not have symptoms but test positive, you go back two days from the test. But the app had five days in it.

‘A submission was made to [Matt] Hancock from Test and Trace people around the time of his resignation saying “it’s five days but it should be two days: should we change it now?” And it didn’t happen.’

NHS Test and Trace — which gets in touch with people who test positive for details of their close contacts — only ask for two days of history.

Justin Madders, Shadow Health Minister, told the newspaper it was ‘another shambolic situation from hapless ministers’.

He said: ‘The app has been one mess after another and a lack of clear information and guidance around the app only undermines its effectiveness.’

A DHSC Spokesperson said: ‘The NHS Covid Aapp is a key tool in our pandemic response, saving thousands of lives and breaking chains of transmission.

‘The app prevented up to 2,000 cases of Covid a day in July. App users will only ever be advised to isolate if they have been in close contact with an individual who goes on to test positive for Covid.

‘It is important users isolate when asked to do so in order to stop the spread of the virus.

‘The recent change to the app logic will result in fewer low-risk contacts being advised to isolate, while advising the same number of high-risk contacts to self-isolate.’

It is understood that app had a different definition of a close contact than the one used by Test and Trace.

The five-day period for the asymptomatic falls at the halfway point in a potential 10-day incubation period.

Millions of alerts have been sent out by the NHS Covid app since it was launched last September.

The NHS app — heralded as a way to halt the spread of the virus — uses Bluetooth to estimate how close a user has been to a Covid positive patient and for how long.

This information allows it to determine whether someone is at risk of catching the virus and if they should self-isolate.

Health Secretary Sajid Javid said the tweak would ‘ensure we are striking the right balance’ between reducing disruption and protecting those at risk.

It forced the Government to exempt key workers across different industries from the quarantine rules, so the country could keep running.

The rules were further slackened yesterday, with under-18s and double-jabbed adults no longer having to isolate if they are a close contact.

But the Government asked that they take a free NHS PCR test when sent an alert by the app. If they test positive, it is then a legal requirement to isolate.