Covid US: Only one of of every 25k vaccinated Americans are hospitalized with virus

A very small percentage of fully vaccinated Americans who contract COVID-19 end up hospitalized or die from the virus, according to the Centers for Disease Control and Prevention (CDC).

As of July 26, the latest date for which data is available, there were at least 6,587 so-called ‘breakthrough’ cases reported among 163 million fully vaccinated individuals.

This means less than 0.004 percent of people who have completed their vaccine series are hospitalized and less than 0.01 percent of fully vaccinated people die from the virus.

What’s more, almost three-fourths – 74 percent – of the breakthrough cases are among people 65 or older.

The data show that the vaccines are as effective as advertised despite recent worries that they could not prevent illness caused by the Indian ‘Delta’ variant.

CDC data shows that only one out of every 25,000 fully vaccinated Americans has tested positive for COVID-19. The data comes a week after Dr Rochelle Walensky (pictured), director of the agency, announced that fully vaccinated individuals should wear masks in indoors public spaces in areas of high or substantial transmission

Health officials have been urging Americans to get vaccinated as soon as possible to protect themselves from the virus.

The U.S. has experienced a surge in COVID-19 cases over the past month, with many like President Joe Biden now referring to the situation as a ‘pandemic of the unvaccinated’.

On Sunday, America recorded 25,141 new cases of coronavirus with a seven-day rolling average of 79,951, which is the highest average recorded since February 16.

It also marks a 312 percent increase from the 19,400 average recorded three weeks ago.

A vast majority of these cases have been among unvaccinated Americans.

The CDC has added some confusion to the mix, however.

Last week, the agency revised its guidelines, asking for fully vaccinated people to wear their masks indoors in areas of high or substantial transmission.

The decision was based on data from Provincetown, Massachusetts, where 74 percent people who contracted COVID in a 469-case outbreak in early July were vaccinated.

Four fully vaccinated people were hospitalized, and there were no deaths.

Fully vaccinated people who do contract the virus are most likely to be over the age of 65, as 74 percent of case reported by the CDC are among the elderly.

Research shows that older people often develop weaker antibody responses to the vaccine, which could potentially leave them more vulnerable to breakthrough infections. 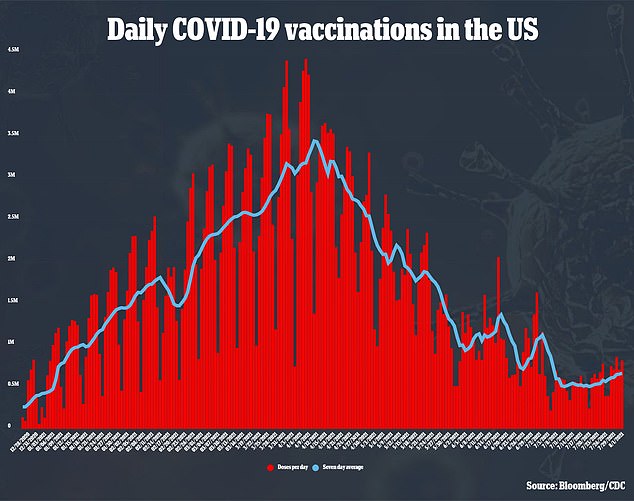 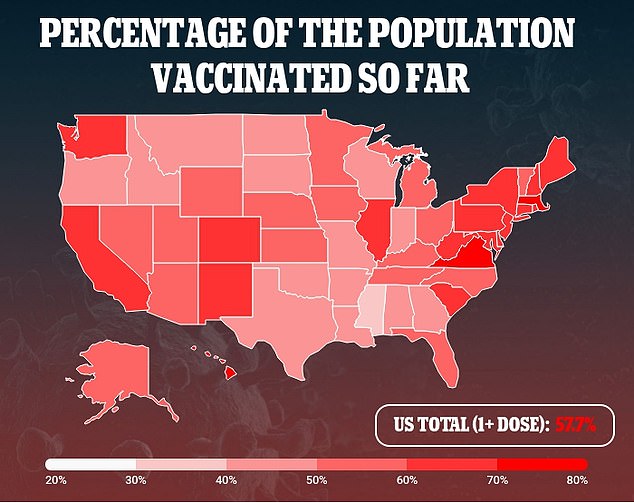 Older people are also more likely to get hospitalized for COVID-19 than younger people in general, – vaccinated or not – so the disproportionate counting of hospitalized cases in the CDC data could cause the elderly to be overcounted as well.

In total, just under 50 percent of Americans are fully vaccinated against COVID-19, per CDC data.

This places the United States still a long way from herd immunity – which could be reached when around 80 percent of the population is fully vaxxed.

The country’s vaccine rollout has slowed over the past few months after reaching a peak in early April.

As the Indian ‘Delta’ variant causes nationwide outbreaks, suddenly some who put off receiving the vaccine are coming in for their shots.

According to data from the CDC, between Tuesday and Saturday last week, around 700,000 vaccine doses were distributed every day across the country.

That is a near 50 percent increase over previous weeks, where less than 500,000 doses were being used every day.

Dr Francis Collins, director of the National Health Institute, told CNN that the recent outbreak could be a tipping point for many to receive the shots.

‘This may be a tipping point for those who have been hesitant to say: OK, it’s time,”‘ Collins said.

‘I hope that’s what’s happening. That’s what desperately needs to happen if we’re going to get this Delta variant put back in its place.’ 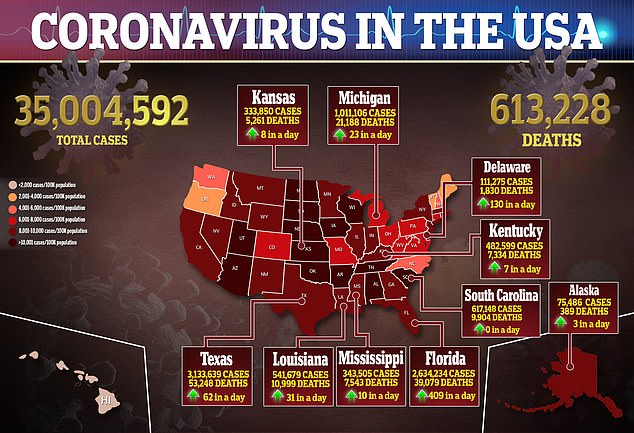