Covid US: Rolling daily average of new cases hits 66,000 – the highest number in a MONTH

On Monday, the U.S. recorded 69,417 new infections with a seven-day rolling average of 66,159, the highest figure in about a month.

In the last week alone, the average number of cases has risen by 24 percent, according to a DailyMail.com analysis of data from Johns Hopkins University.

Although the figure is far below January’s peak of about 247,000 average new cases, it is in line with the late July surge, when daily cases were averaging about 68,000.

Meanwhile, just 701 coronavirus deaths were reported, which is the lowest number reported this month, the analysis revealed.

Since the pandemic began, more than 30.3 million Americans have been infected with COVID-19 and more than 550,000 have died.

However, even as the rollout of vaccinations continues to pick up speed in the U.S., cases of coronavirus are increasing in half of states and the District of Columbia, data from Johns Hopkins shows.

Michigan is currently leading the nation in average new cases with a 14 percent rise over the past week and a 208 percent increase over the last month.

Additionally, in the Northeast, New York and New Jersey are seeing spikes in infections and stubbornly high test positivity rates.

On Monday, the U.S. recorded 69,417 new coronavirus infections with a seven-day rolling average of 66,159, the highest figure in about a month 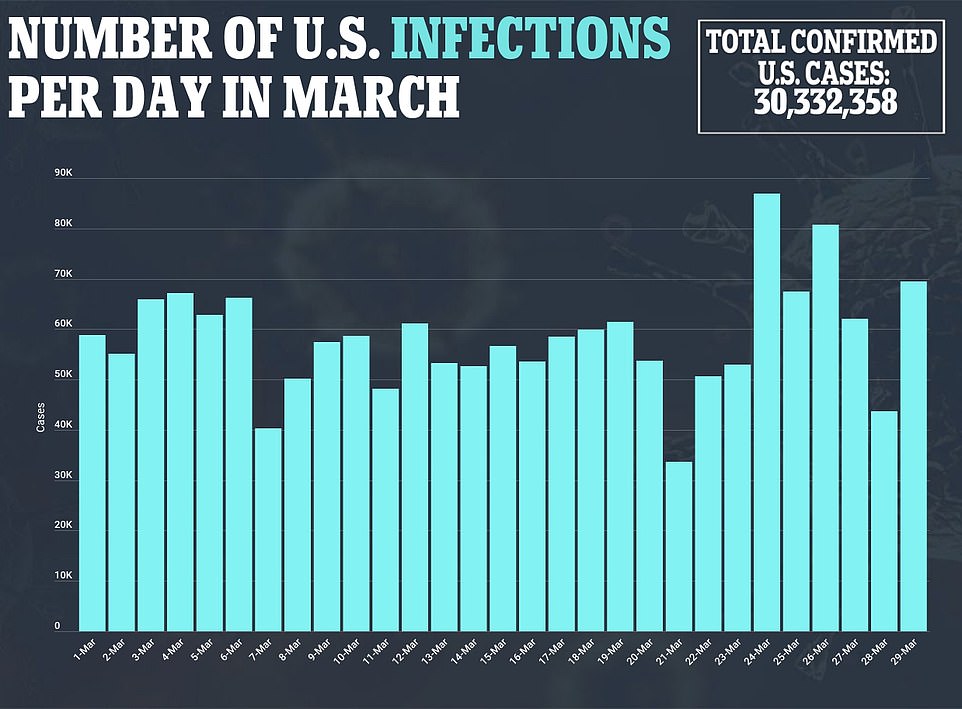 In the last week, the average number of cases has risen by 24%, according to a DailyMail.com analysis of data from Johns Hopkins University 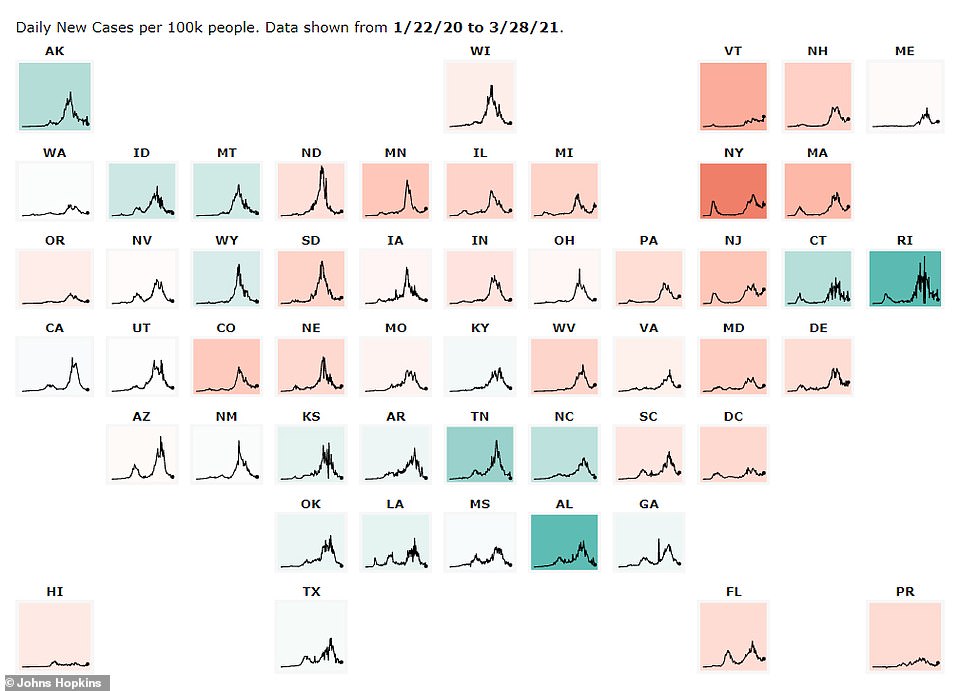 Despite an average of 2.7 million people being vaccinated every day, 25 states and the District of Columbia are reporting a rise in cases, according to Johns Hopkins data 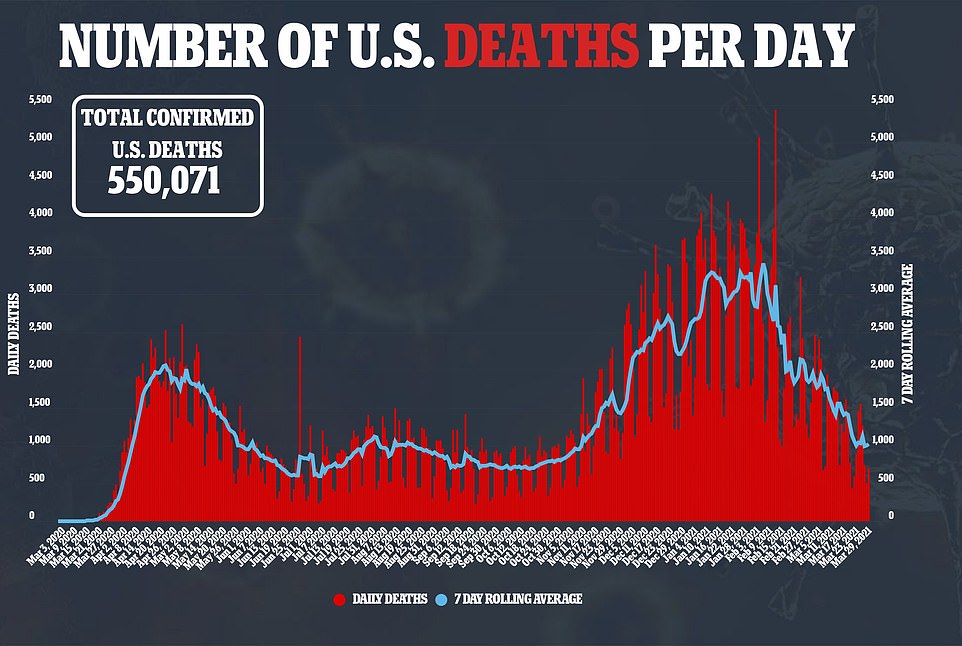 On Monday, just 701 COVID-19-related fatalities were reported, which is the lowest number reported this month, a DailyMail.com analysis revealed

Reich said he believes a combination of immunity from previous infections and vaccinations will help prevent the surge from resembling the waves seen in spring 2020 or winter 2021.

However he says people will have to remain cautious for at least another few weeks until enough of the population can get vaccinated to reach herd immunity.

His comments echo the warnings made by Centers for Disease Control and Prevention (CDC) director Dr Rochelle Walensky during a press briefing on Monday, as she voiced concerns of an ‘impending doom.’

‘We have so much to look forward to, so much promise and potential of where we are and so much reason for hope,’ she said.

Michigan is among the states experiencing the worst of the surge, with average cases rising 3,753 from 4,287 in just one week – and a dramatic rise from an average of 1,388 on March 1, a DailyMail.com analysis found.

‘It’s a stark reminder that this virus is still very real. It can come roaring back if we drop our guard,’ said Governor Gretchen Whitmer last week.

However, she said she currently does not have plans to tighten any restrictions, such as for indoor drining, after they were recently loosened.

Josh Petrie, a research assistant professor of epidemiology at the University of Michigan School of Public Health, told NBC News there are a few reasons behind the increase in cases 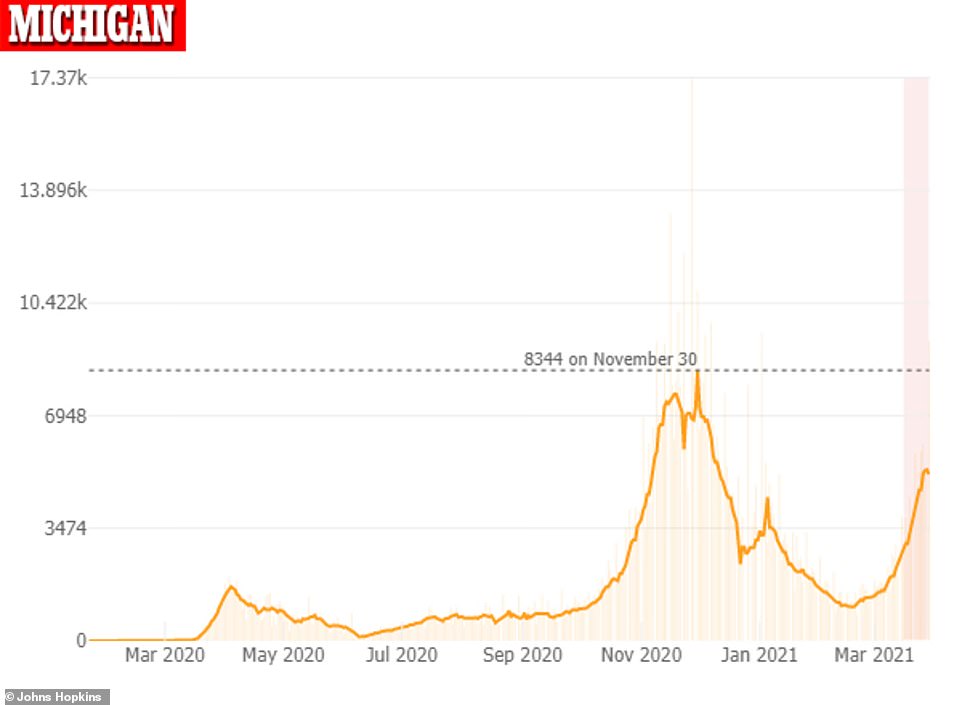 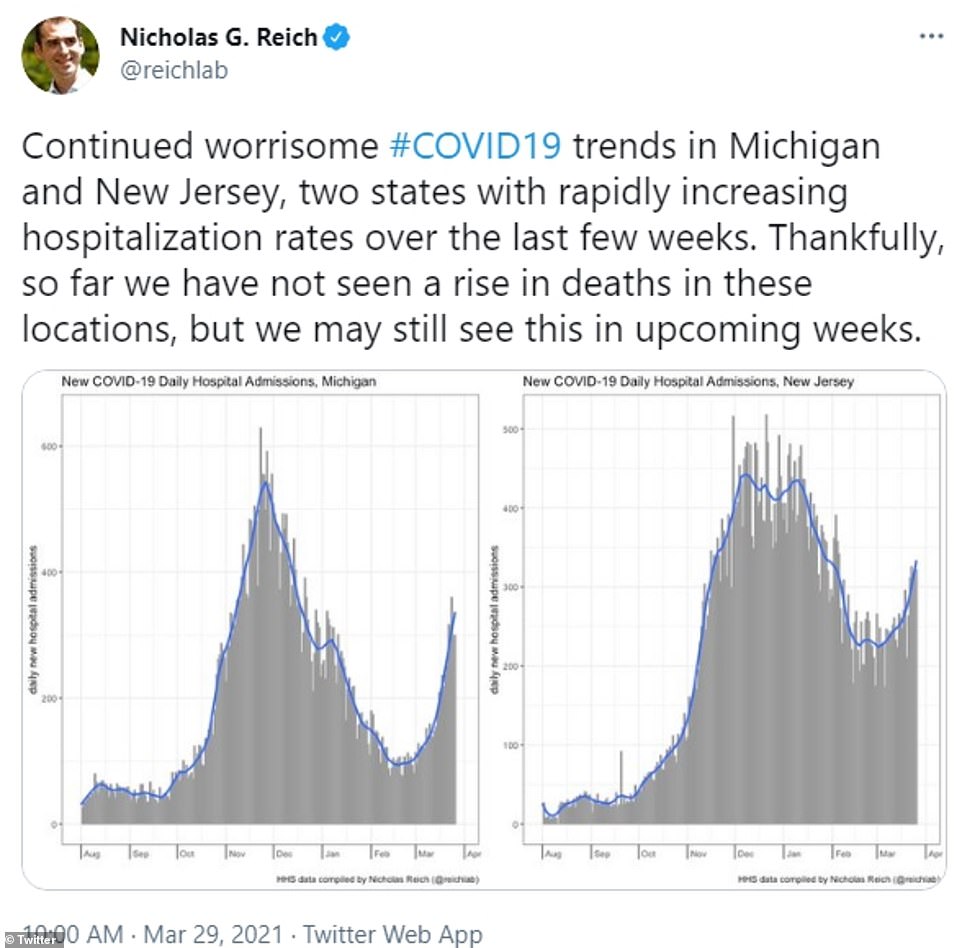 ‘For the state as a whole, we are seeing increases in travel and nonessential trips outside the home that are approaching pre-pandemic levels,’ he said.

‘Certainly, less mask-wearing and social distancing is going to increase risk of transmission.’

In a tweet on Monday, Reich noted the daily hospital admissions are continuing to spike in Michigan, from about 100 at the beginning of March to more than 200 currently.

In the Northeast, in New York – the very first epicenter of the pandemic – cases are rising more rapidly than almost any other other state.

On Sunday, the Empire State recorded a seven-day rolling average of 8,601 cases, a nearly 10 percent increase of 7,820 average from one week prior.

According to a USA Today analysis, New York is the states where coronavirus is spreading the fastest ‘on a per-person basis.’

Although the number of deaths and hospitalizations in the state remain low, the test positivity rate has remained above three percent for at least one month. 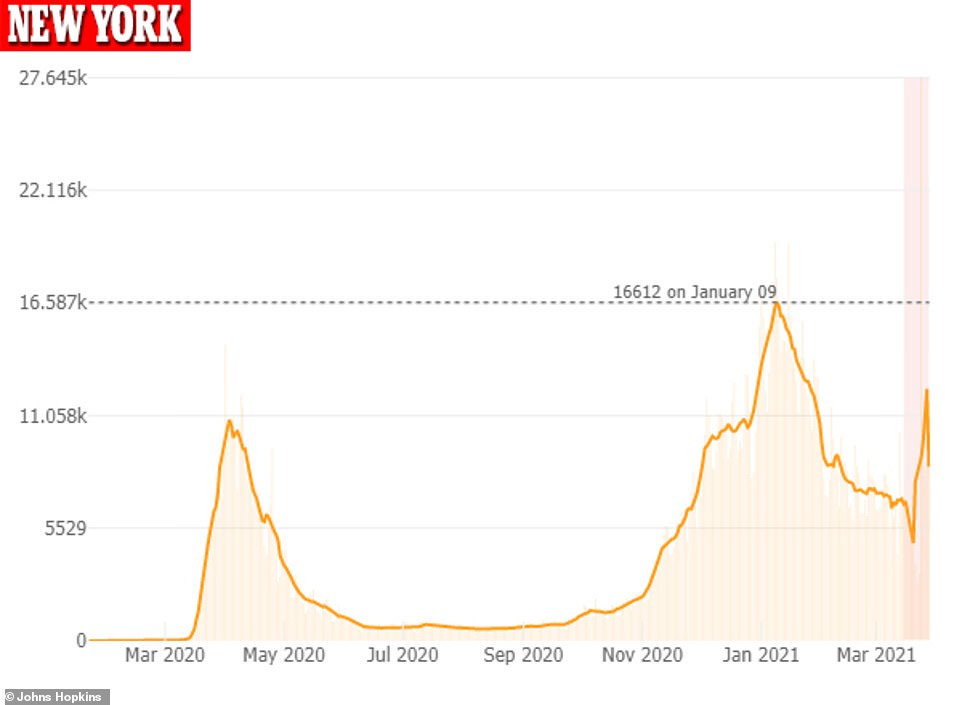 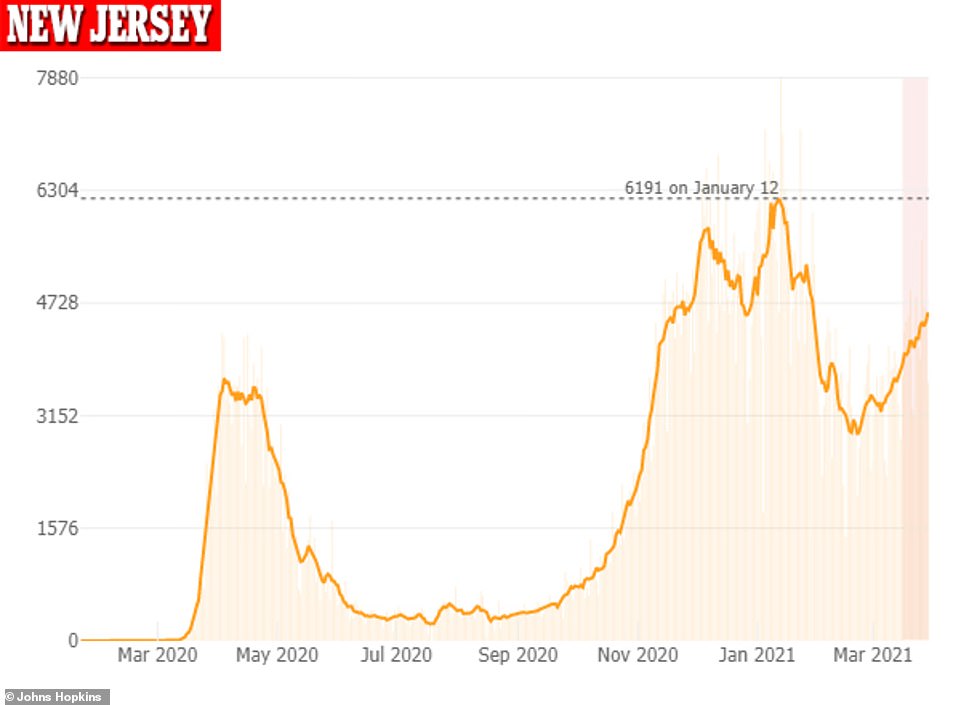 New Jersey recorded 346.4 cases per 100,000 people over the last seven days, the highest rate in the nation, according to the CDC

In a statement on Sunday, Governor Andrew Cuomo encouraged people to get vaccinated, but still follow safety measures.

‘The vaccine is the weapon that will win the war, and each day more New Yorkers are getting vaccinated for COVID-19,’ he said.

‘However, the infection rate also depends on what we do, and New Yorkers should continue staying safe and protecting one another as the virus continues to spread in our state.’

According to the CDC, New Jersey recorded 346.4 cases per 100,000 people over the last seven days, the highest rate in the nation.

Reich also noted in his tweet that daily hospital admissions have risen in New Jersey, from about 250 at the beginning of March to more than 300 currently.

Governor Phil Murphy recently said the state would pause its plans to reopen for a couple of weeks due to surging case.

‘I think what you’ll see going forward is we will do that,’ he told CNN recently.

‘My guess is, we won’t be opening up further capacity for some time now because of the caseload.’ 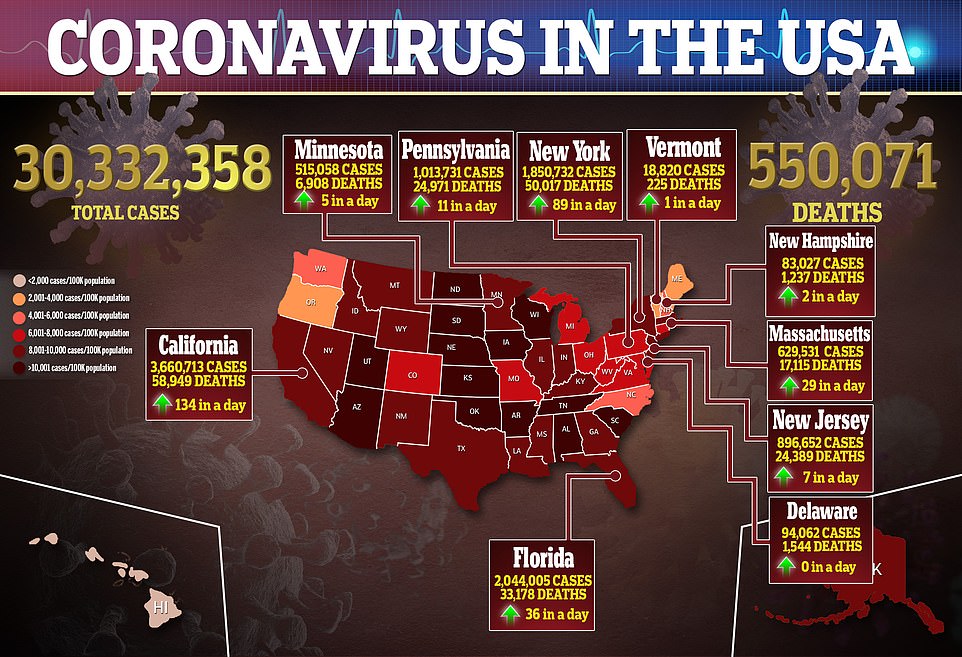