Covid US: UK and California variants ‘merged’ in new case

A hybrid version of the coronavirus has surfaced in California after the British Kent variant and a strain found in the US merged together inside an infected person.

The variant, not yet named, has only been spotted once but scientists fear there are likely to be more cases.

Experts are worried because it carries mutations which appear to make it able to spread faster and also to slip past some of the immunity made from past infections or vaccines.

It was formed from the Kent Covid variant – known scientifically as B.1.1.7 – and a Californian variant called B.1.429.

Scientists in the US claim they merged in a ‘recombination event’, the New Scientist reports. This happens when two different versions of the virus infect the same cell and then swap genes while they are reproducing, giving rise to a new variant.

Researchers have warned in the past that these events are possible but said they are ‘unlikely’ because they require very specific conditions and the coincidence of mostly uncontrollable events. They are more likely to happen during huge outbreaks.

It is believed to have happened in this instance because a number of mutations matching those on the Kent and California variants all appeared in the same place at once. There are no details of the patient and it is unclear whether the combination happened in them, or whether they caught the variant from someone else.

While experts have said there is no need to panic about new variants, one admitted recombination was ‘dangerous’ because it could change the virus so suddenly.

Britain’s Government is clearly worried about the spread of variants that could escape immunity from the current vaccines and is likely to stretch out the lifting of lockdown rules into the summer in a bid to prevent an uncontrolled outbreak.

HOW CAN VIRUSES COMBINE?

For a combined variant of the virus to emerge, one person must be infected with two strains of the coronavirus – likely from two separate sources – at the same time, and then the viruses must bump into each other inside the body.

Once the viruses are inside the body, the way they spread is by forcing human cells to make more of them.

The coronavirus is made up of genetic material called RNA and, to reproduce, it must force the body to read this RNA and make exact copies of it.

There are inevitably errors when this happens because it happens so fast and so often and natural processes are imperfect.

If two viruses are in the same place at once, both being duplicated by the same cells, there is a chance the RNA genes could be mixed up, just as there could be a mix-up if someone dropped two packs of cards at once and picked them all up.

Most places have dominant variants of the virus so someone getting infected with two is unlikely to begin with.

And, for healthy people, there is likely only a window of around two weeks before the body starts to develop immunity and successfully clear out the first version of the virus.

This risk window could be cut to days for the majority of people who develop Covid symptoms  – which takes an average of five days – and then stay at home sick.

But huge, poorly controlled outbreaks like the ones in the UK and US over the winter, significantly raise the risk of the combination events simply because the number of infections is higher.

For a combined variant of the virus to emerge, one person must be infected with two strains of the coronavirus – likely from two separate sources – at the same time, and then the viruses must bump into each other inside the body.

Most places have dominant variants of the virus so someone getting infected with two is unlikely to begin with.

And, for healthy people, there is likely only a window of around two weeks before the body starts to develop immunity and successfully clear out the first version of the virus.

This risk window could be cut to days for the majority of people who develop Covid symptoms  – which takes an average of five days – and then stay at home sick.

But huge, poorly controlled outbreaks like the ones in the UK and US over the winter, significantly raise the risk of the combination events simply because the number of infections is higher.

Dr John McCauley, a flu expert at the World Health Organization and the Francis Crick Institute in London, told MailOnline: ‘We knew that this type of thing was a possibility.

‘What we would not know at this stage is how this affects fitness [of the virus] – like the Kent variant seemingly being fitter than its predecessor – or how it might be recognised by antibody following vaccination or infection.’

And Emilia Skirmuntt, an evolutionary virologist at the University of Oxford, told MailOnline: ‘It can happen but it’s a bit more complicated than with influenza [flu].

‘That would be quite dangerous and it can change the whole parts of the proteins of the virus which can render vaccines inefficient.

‘We should look out for it, but coronaviruses don’t change on the same level as influenza. It is possible but I don’t think it is very probable.’

The mutations that characterise this variant may have made the recombination more likely, said the scientists who discovered it.

One of them – N501Y, which is found in the Kent variant – makes the virus spread faster, so increases someone’s risk of infection.

And another, E484K, makes immunity from previous infections or from vaccines less effective, raising the risk that someone’s immune system wouldn’t be able to stop the virus. 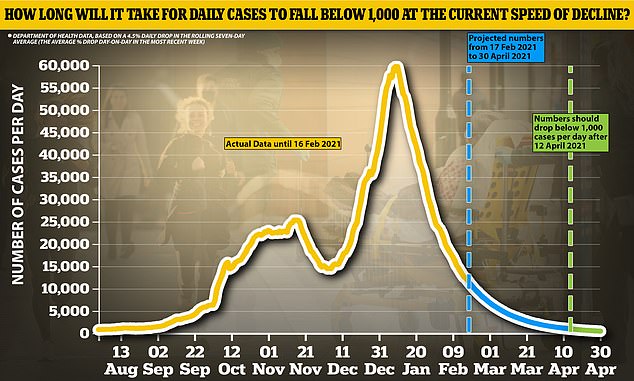 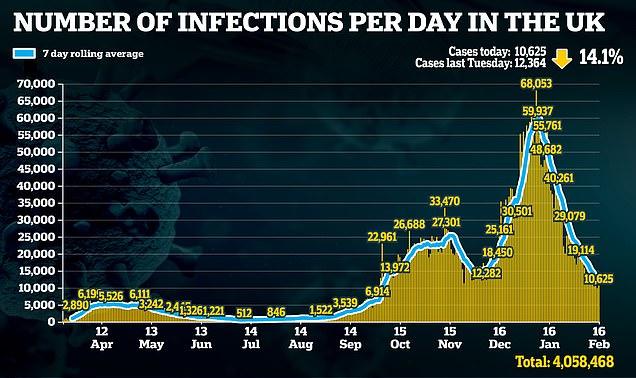 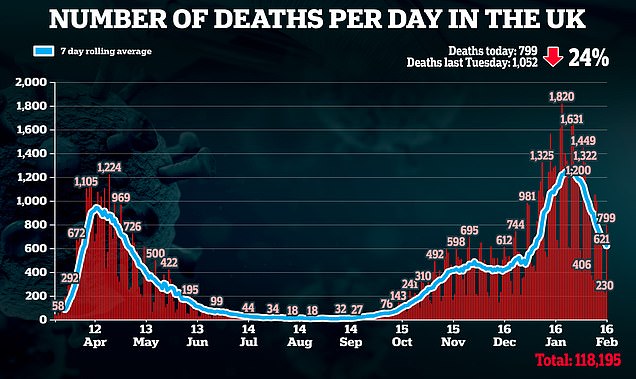 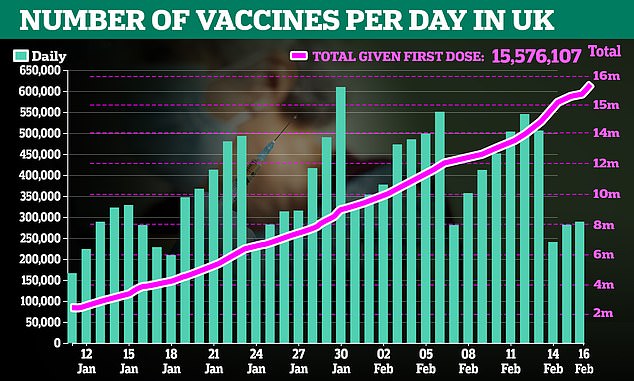 There are signs the UK’s coronavirus vaccine roll-out may be slowing after fewer than 280,000 doses were administered yesterday

MPs’ fury over ‘Boris Johnson’s plan for daily cases to drop below 1,000 before ending lockdown’

Boris Johnson is facing a furious backlash from Tory MPs and the hospitality industry amid claims his lockdown exit roadmap will not allow pubs and restaurants to return to normal until July.

The PM is due to unveil his lockdown exit strategy on Monday and it is thought curbs on pubs, restaurants and hotels could be eased at four-weekly intervals starting with a ‘limited’ easing at the Easter holiday.

But hospitality venues may have to wait many months beyond that until they can return to ‘broadly normal’ service.

Meanwhile, it is claimed the Government will not agree to a major easing of lockdown restrictions until new daily coronavirus case numbers are below 1,000, prompting Tory MPs to warn they ‘cannot allow the goalposts to be moved every time we are about to reach freedom’.

Daily cases are currently above 10,000 and on the current trajectory they may not dip to three figures until April and that is before taking into account the potential impact on rate of infection of schools returning next month.

NHS bosses echoed a similar sentiment as they said lifting lockdown before the end of May is too dangerous and all over-50s should receive both doses of a coronavirus vaccine first.

NHS Providers, which represents hospital trusts in England, said in a gloomy letter to Mr Johnson that it would be ‘very premature’ to significantly ease curbs now, claiming cases were ‘still some way away’ from being low enough for hospitals to function properly.

However, Foreign Secretary Dominic Raab distanced the Government from the hundreds of daily cases target as he said ‘there is no single cast-iron formula or one particular indicator that above all other considerations can decide this’.

The reports suggest Mr Johnson is going to take a cautious approach to easing rules but Mark Woolhouse, professor of infectious disease epidemiology at the University of Edinburgh, today claimed the data is actually pointing to an ‘earlier unlocking’.

He said the vaccine roll-out and the protection provided by the jabs means that ‘if you’re driven by the data and not by dates, right now, you should be looking at earlier unlocking’.

The blueprint being discussed by ministers and industry leaders would allow restrictions to be eased only at four-weekly intervals.

The gradual approach means traders would have to wait until at least Easter – early April – for a limited restart.

This is likely to include the reopening of holiday lets and larger hotels, with dining rooms still closed. Sports such as golf and tennis could resume.

Dr Bette Korber, a scientist at the Los Alamos National Laboratory in New Mexico who discovered the variant, told a briefing: ‘This kind of event could allow the virus to have coupled a more infectious virus with a more resistant virus,’ the New Scientist reported.

The way she noticed the recombination event had happened was that there was a sudden appearance of multiple mutations in one go, whereas they usually accumulate more slowly.

The coronavirus is constantly evolving but it usually happens by the process of mutation by error when cells are copying and pasting – and occasionally misreading – its genetic code as it reproduces inside the body.

Variants of the virus contain dozens of mutations and there have been thousands of them since the pandemic began, but most of them are useless and not cause for concern.

Mutations that give the virus an advantage, such as the ability to spread faster or dodge the immune system, may stick around and permanently change the virus.

Scientists say although it is bad luck for viruses to combine in the way they appear to have in California, it is certainly possible and proven to happen.

Dr Julian Tang, a professor in respiratory sciences at the University of Leicester, said it was ‘not uncommon’ for two strains of a virus to infect the same person.

‘It is perfectly possible for a child attending a primary school to get infected with one variant of Covid, and an older sibling to attend secondary school and get infected with a different Covid-19 variant – and for both children to bring their viruses home to infect each other – and their parents with both variants,’ he told MailOnline.

Professor Lawrence Young, a virologist at the University of Warwick, said that it was unlikely that two strains of Covid could infect a cell at the same time.

‘If one virus gets in it takes over that cell, and it’s difficult for another to get in,’ he told MailOnline.

He added changes in the virus were being driven by random mutations: ‘It does mutate at a very very low rate and a lot of [its mutations are] in response to the low pressure that we put on it.’

He said it was through this mechanism that changes in the virus were occurring and new strains were evolving, and there was no proof that variants had emerged after swapping genes between different viruses.

Professor Keith Neal, an infectious diseases expert at the University of Nottingham, said if there’s a lot of transmission ‘you can pick up two different viruses around the same time’.

But he cautioned that when there is a predominant strain – such as the Kent version in large parts of the UK – people are only likely to catch this one.

Nonetheless, a handful of concerning variants have prompted officials to carry out door-to-door testing in some parts of the UK.

Studies have shown vaccine-triggered antibodies may be less able to destroy variants with some mutations, sparking fears that the rollout will be unsuccessful.

But not all immunity is based off antibodies, scientists say, meaning it is unlikely any of the variants  will render the current crop of jabs useless.

She revealed the findings to a meeting of the New York Academy of Sciences on February 2, saying they had ‘pretty clear’ evidence the event had occurred.