Covid vaccines for children as young as SIX MONTHS could be authorized in JUNE, FDA says

COVID-19 vaccines for children as young as six months old may be around the corner, as manufacturers and some parent groups pressure regulators to give approval. Many experts doubt the shots are needed for this age group, though.

Dr Peter Marks — who heads up the U.S. agency’s approval process for Covid shots — pledged Friday not to take any more time than is needed to approve the jabs for children six months to five years old. He targeted June to get the jabs authorized.

His statements come after Moderna submitted its application for authorization this week, and Pfizer is expected to follow soon as well.

The move would be a financial boon to the two major pharmaceutical companies, and would make America the nation with the youngest vaccine eligibility in the world.

Not all experts believe the shots are needed for children this young, though, as they face little risk from the virus, making up 0.1 percent of Covid deaths despite data from the Centers for Disease Control and Prevention (CDC) estimating that 75 percent have been infected with the virus over the last two years.

Moderna yesterday applied for its shot to be approved for use in those aged six months to five years. The FDA is coming under rising pressure to green-light shots for children, but some experts have warned against jabbing children pointing out they are at lowest risk from Covid

Marks told the Washington Post: ‘We are not going to delay things unnecessarily here.

‘We would anticipate June authorizations for one or more of the pediatric vaccinations.’

Moderna applied for two doses of its vaccine to be given to children between six months and five years old on Thursday. Pfizer is expected to make the same request for three doses of its jab in the coming weeks.

The FDA is coming under enormous pressure from some quarters to green-light shots for children amid rising Covid cases.

But some experts have raised concerns over vaccinating children, pointing out they are least at risk from the virus out of all age groups.

More than three in four children under 12 years have already caught Covid and now have antibodies against the virus, national surveillance suggests.

Children are also at very low risk of death from the virus, with a total of 1,017 dying from Covid since March 2020, official data shows — accounting for around 0.01 per cent of America’s almost a million deaths from the virus. For comparison, among people aged 65 and over the death toll is 724million. 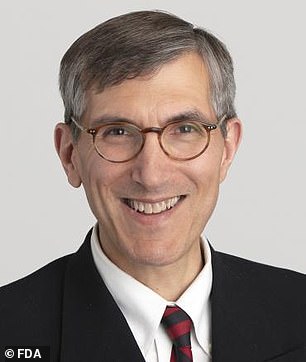 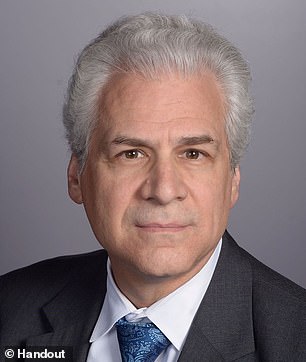 Dr Peter Marks, (left) from the FDA, promised not to delay approving rolling out jabs to children. Dr Michael Kurilla, (right) is one of the few members of the National Institutes of Health to have refused to approve jabs for children aged five to 11 years in October 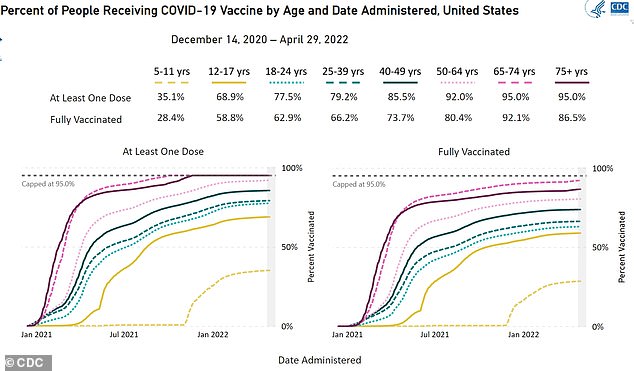 The above graph shows the proportion of 5 to 11-year-olds, which can get Pfizer’s vaccine, which have got one or two doses of the vaccine. It is currently up to 28 per cent being double-jabbed, despite the shots being available to the age group since October 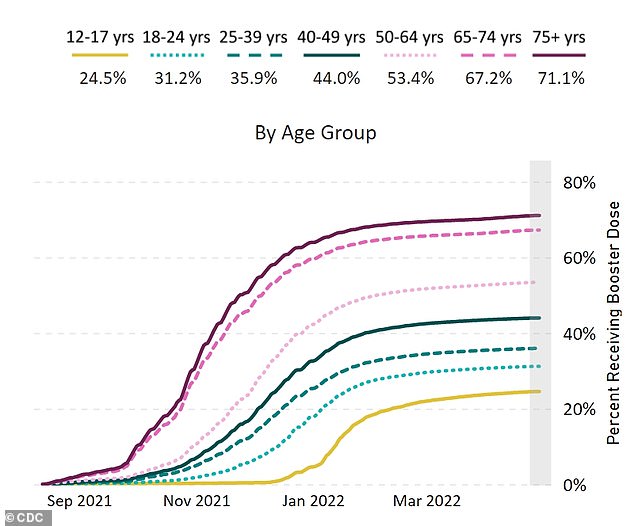 The above graph shows the proportion of 12 to 17-year-olds that have got a booster jab against Covid. It is just under a quarter, at 24.5 per cent

No Covid vaccines have yet been made available for America’s 18 million children aged five years and younger.

But if they are given the green-light it will make the U.S. the first country in the world to approve the jabs for children who are just six months old.

Cuba has been vaccinating children as young as two years since October, while both Chile and China are offering jabs to everyone over the age of three years.

Covid booster shots might not be needed every year, experts say

Covid booster vaccines might not be needed every year because protection against severe infection is holding up ‘pretty well,’ top scientists say.

Dr. Paul Offit, from the FDA’s jabs advisory panel, warned Tuesday that the U.S. was in danger of sleep-walking into an annual Covid vaccination drive, like with the flu, without considering whether the top-up shots were actually needed.

Other top scientists also raised concerns over extra boosters, saying the added doses would likely only give limited protection against infection with the virus.

He added: ‘We didn’t define what the goal of this extra shot was.’

Dr John Wherry, an immunologist at the University of Pennsylvania, also called for officials to look at the data carefully before approving annual boosters.

He said: ‘The efficacy data that I’ve seen from the CDC meeting and lots of other data really shows that our protection from severe disease is holding up pretty well.’

Should the jabs be approved children will be offered smaller doses than adults, and will only be able to get them at clinics with a pediatrician available.

Moderna is expected to file a ‘full package’ of information allowing it to get emergency use authorization in the second week of May.

The FDA will then hold meetings with its outside advisers on June 8, 21 and 22 to consider the request.

The mRNA vaccine is already available to everyone 18 years old and above in the U.S. and has been administered to 216 million.

Pfizer’s jab was approved for people aged 12 to 15 years old in May, and then five to 11 year olds in October.

But CDC statistics show just over 28 percent of five to 11-year-olds are now fully vaccinated.

A booster jab with Pfizer’s shot was also approved for 12 to 17-year-olds in January.

But only a quarter of children and adolescents in this age group have also got the top-up dose so far.

Some parents are clamoring for Covid jabs to be approved for their kids, amid rising cases and as almost all restrictions to halt the spread of the virus are dropped.

But a number of experts have raised concerns over vaccinating children, who face a small risk of becoming seriously ill with Covid and a vanishingly small chance of death.

There are also fears over myocarditis, a form of heart inflammation detected in about one in 20,000 boys following vaccination. Girls are less at risk from the complication.

While in most cases the condition is mild, scientists are not yet sure of the long-term effects.

Earlier this year vaccines expert Dr Michael Kurilla, who is also a director at the National Institutes of Health, was one of its few members to refuse to approve jabs for kids five to 11 in October.

He told DailyMail.com at the time that while he thinks children with certain conditions that put them at a high risk should receive the shot, it was not clear if they should be approved for healthy children.

Experts have also railed against booster doses for children — which Pfizer is expected to apply for among under-12s.

Dr Monica Ghandi, an infectious diseases expert at California University, San Francisco, said: ‘The fact that 75 percent of our children and adolescents in the U.S. have now been exposed to Covid and have evidence of [antibodies] is further evidence that booster shots are not needed for this population.’

Ghandi has previously said she did not plan to get either of her 12 and 14-year-olds sons the booster dose because the risks ‘outweigh’ the benefits. 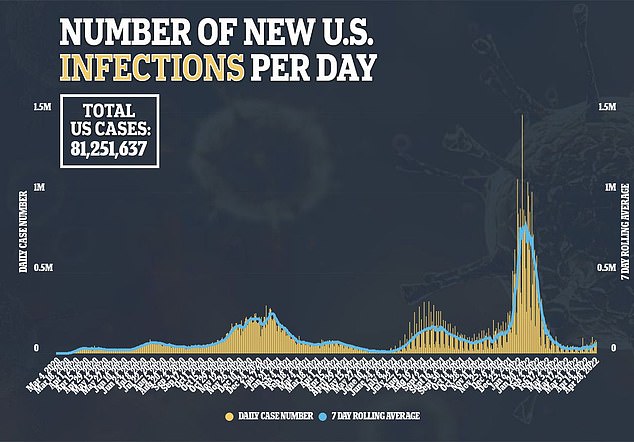 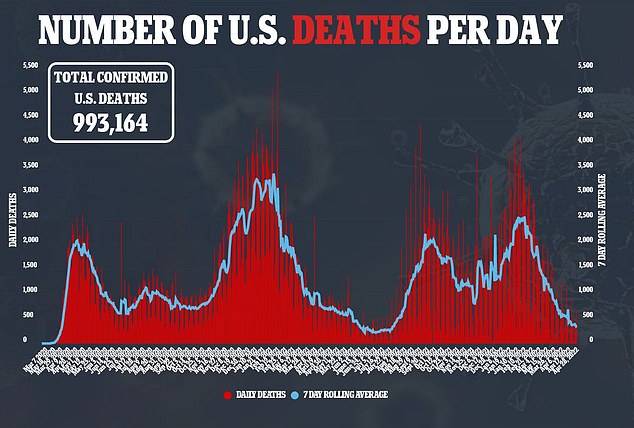 The FDA’s promise today to approve shots quickly follows on from reports suggesting it would not review Moderna’s application until it also had Pfizer’s.

It suggested regulators may be uneasy about authorizing a shot that could be ‘less effective’ when another was only a few weeks away.

Dr Marks told the Post that if the vaccines are ready within a week of each other he might present their applications for consideration on consecutive days.

But if there is a longer time lag, he said he would hold separate meetings with advisers.

None region in the U.S. has more than 45 per cent of its five to 11-year-olds fully-vaccinated against Covid.

More than 150 million Covid vaccines are currently sitting in storage or have been thrown away since the roll out began, data suggests.