Covid was only the 26th leading cause of death in England in June, official data revealed today.

Just 0.9 per cent of fatalities were down to the virus last month — the equivalent of 11 per day, figures from the Office for National Statistics showed.

Meanwhile, the rate of coronavirus deaths was so low in Wales they couldn’t even work out where Covid ranked compared to other diseases.

Despite deaths having plummeted over the past few months because of lockdown and vaccines, the virus is still the leading killer this year.

But fatalities are starting to speed up now, with infections having soared because of the spread of the Indian Delta variant. Experts say the easing of restrictions will inevitably cause the outbreak to pick up pace.

And despite vaccines drastically slashing the risk of people falling seriously ill, they are not perfect. A proportion of people who get infected will still die, although that fraction is much smaller now than it was before the roll-out began. 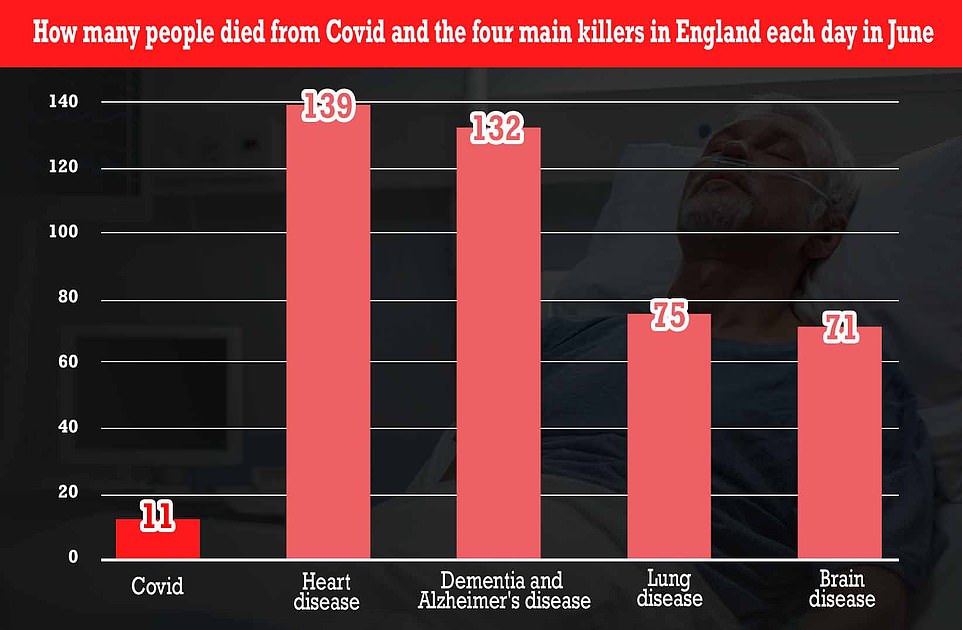 Just 0.9 per cent of fatalities were down to the virus last month — the equivalent of 11 per day, figures from the Office for National Statistics showed. For comparison, heart disease — the country’s leading killer — claimed 139 lives per day, 12 times more than the coronavirus

The top 26 leading causes of death in England in June

Malignant neoplasms, stated or presumed to be primary of lymphoid, haematopoietic and related tissue: 922 deaths

Cirrhosis and other diseases of liver: 735 deaths

Diseases of the urinary system: 566 deaths

The ONS calculates the figures based on the number of deaths where Covid was the underlying cause.

Taking into account all deaths that involved Covid, the virus was linked to 476 fatalities — 1.2 per cent of all deaths in England.

The equivalent figure for Wales is 0.2 per cent, with the virus contributing to five deaths.

But Covid was only blamed for two of the 2,560 deaths registered in Wales.

The 0.1 per cent of deaths linked to the virus in Wales is the lowest proportion the country has seen so far in the pandemic. It was so low that the ONS was unable to accurately rank it against other leading causes.

But it was still nowhere near the scale of the crisis seen in the first wave, when figures breached 6,200 deaths for every million people.

In the second wave, Covid fatalities peaked at 5,496 per million, the same ONS data showed.

Meanwhile, the figures also showed deaths from flu and pneumonia were much lower than the five-year average.

The ONS team said: ‘This is likely in part because of coronavirus restrictions and guidance, such as social distancing, reducing the spread of infections such as flu.’

Heart disease was the biggest killer in June, causing 4,183 deaths — equating to 10.8 per cent of all deaths in England.

It was followed by dementia and Alzheimer’s disease (10.3 per cent), lung cancer (5.8 per cent) and strokes and other brain diseases (5.5 per cent).

The number of people who died in total in the country in June is 1,275 less than it was one year ago, but still 0.8 per cent above the five year average.

The ONS said the number of people who died in total in the country last month is ‘significantly lower’ than it was in June 2020, with 1,275 less deaths being recorded.

But they said the number is still ‘significantly higher’ (0.8 per cent) than the average than the five year average.

It comes as separate figures today showed nearly 750,000 people in England were infected with Covid last week in the highest number since the second wave was still raging in January.

The Office for National Statistics’ weekly surveillance report estimated that one in 75 people had the virus in the seven days to July 17, the equivalent of 741,700, as the epidemic grew by 28 per cent.

The report was based on random testing of about 130,000 people in private homes across the country.

It means Covid is more widespread now than it has been since the last week of January, when there were estimated to be about 850,000 people infected at any given time in England.

The figures reveal that Manchester is still the country’s Covid capital, with a 3.7 per cent positivity rate in the last week, suggesting one in 27 Mancunians were carrying the disease. 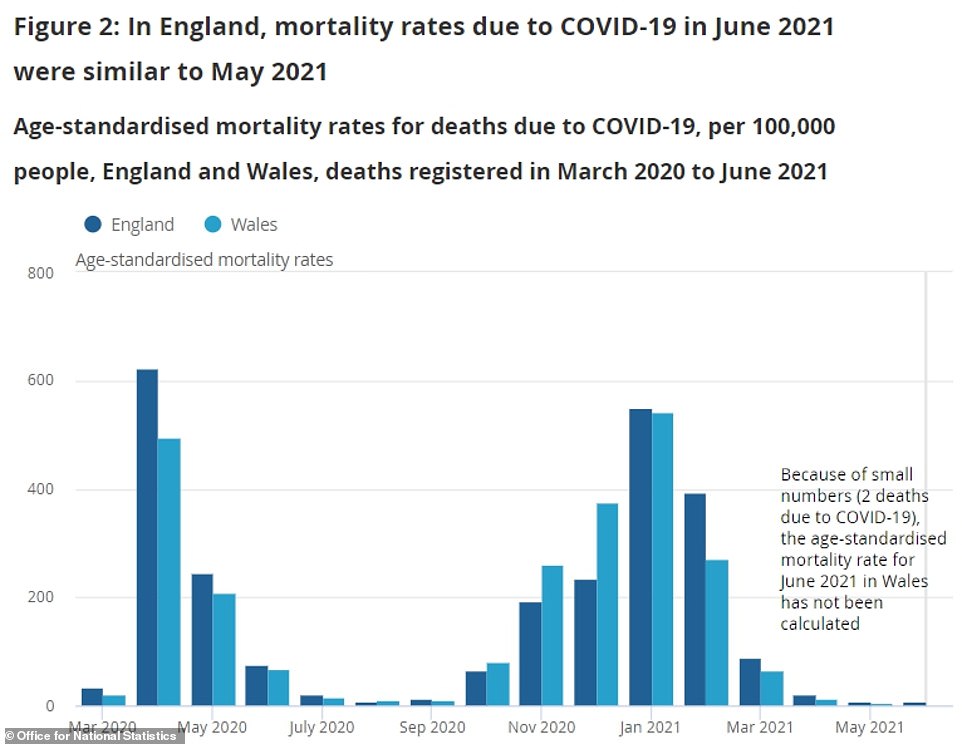 In England, the number of people dying from Covid dropped slightly in June compared to one month earlier, accounting for 7.5 deaths per 100,000 people, compared to 7.1 per 100,000 in May 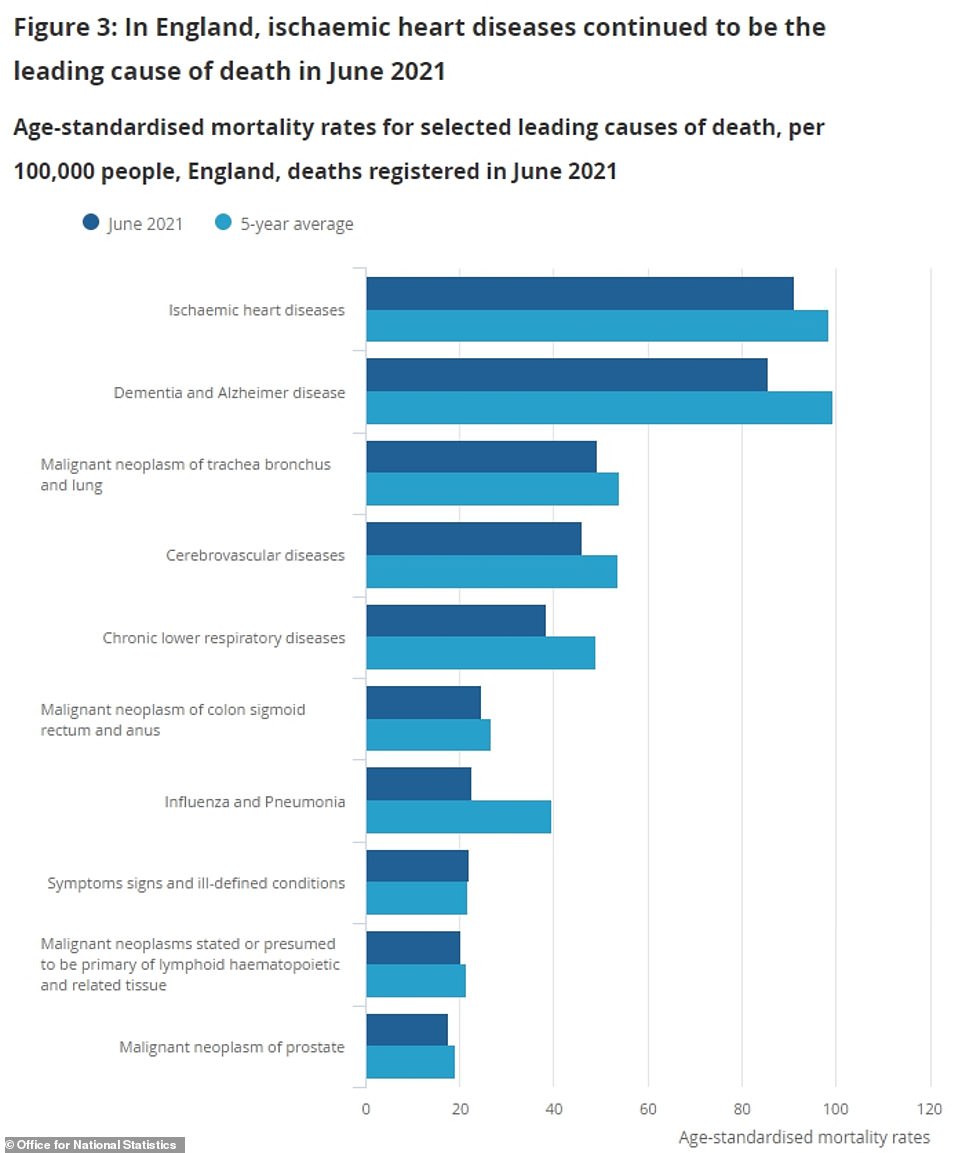 Heart disease remained the biggest killer in England, causing 4,183 deaths — equating to 10.8 per cent of all deaths in England. Dementia and Alzheimer’s disease (3,962), lung cancer (2,241) and brain disease (2,123) were the next biggest killers. These were followed by chronic lower respiratory diseases (1,757), bowel cancer (1,122) and flu and pneumonia (1,045). Deaths from flu were nearly half as low as usual, with statisticians crediting lockdowns for the drop in the amount of the virus in circulation 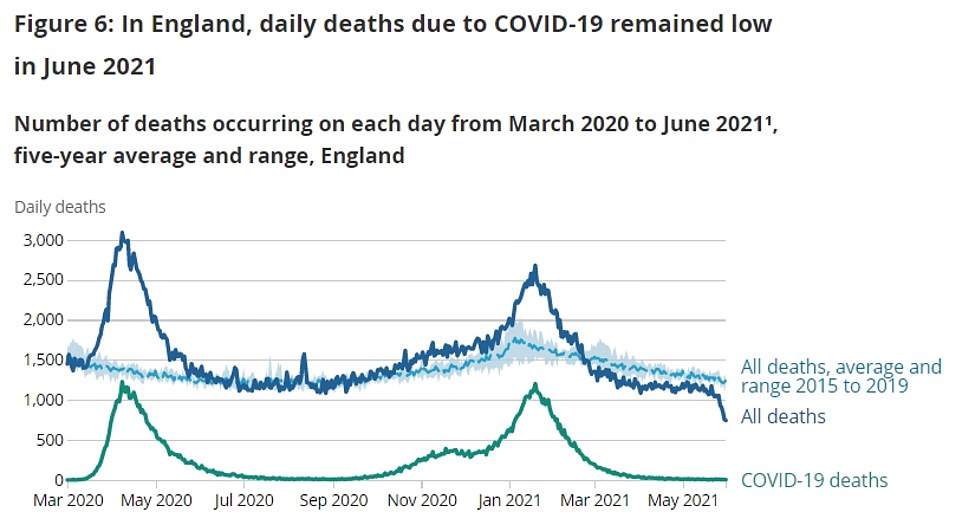 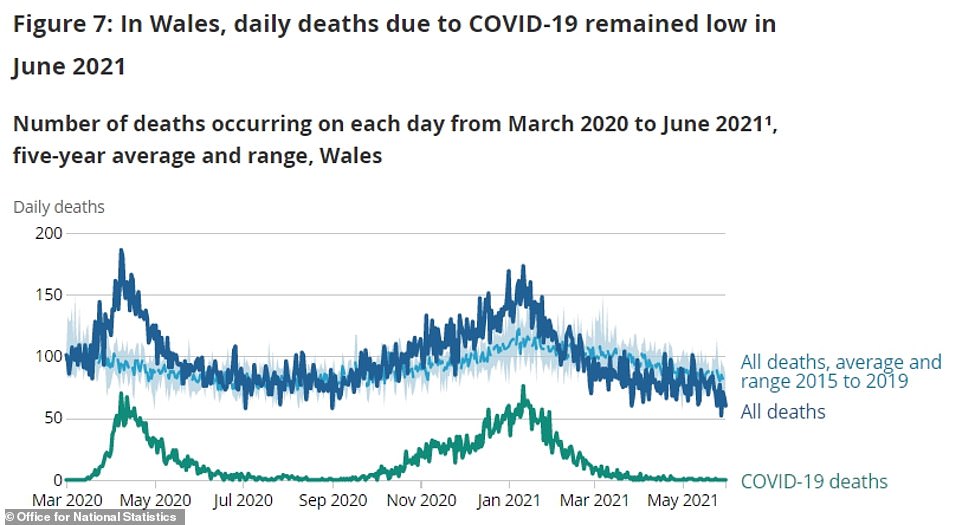 In England and Wales, the proportion of deaths linked to Covid remained low in June. The virus accounted for just two of the 2,560 deaths recorded in Wales — such a low number the ONS were unable to accurately rank it against other leading causes. In England, 344 people died from Covid last month