A former headteacher has been branded a ‘selfish covidiot’ for publicly bragging that she is inviting her pals over with their children for play-dates with her daughter as she’s had ‘enough’ of lockdown.

Claire Waddingham waded into a public debate over social distancing rules on social media on Tuesday and proudly announced her friend was coming round on Wednesday with her own youngster.

The self-proclaimed anti-vaxxer, who was previously the headteacher of a London Special Educational Needs school, claimed ‘enough is enough’ of lockdown.

She branded coverage of the deadly pandemic ‘propaganda’ and appeared to mock people for waiting for ‘a vaccine shoot-up’ – claiming those in lockdown were ‘having their life taken away indefinitely’.

However Mrs Waddingham’s outspoken views were met with criticism as she was inundated with angry fellow parents who branded her a ‘covidiot’ who has her ‘head in the sand’.

But the mum refused to be undeterred and told those who disagreed to do what they wanted but ‘let the thinking amongst us get back to it’.

However after being contacted by journalists about the backlash, she claimed she had changed her mind at the last minute and her friend in fact hadn’t visited on Wednesday after all.

Mrs Waddingham, from north London, said: ‘The risk of loneliness and mental illness issues are far higher than catching anything at this point.

‘My friend is coming over tomorrow with her little girl to play with mine.

‘We’ve all isolated for six weeks. That’s it now.

‘My grandmother wants to continue with isolation and I respect her choice. But enough is enough.’ 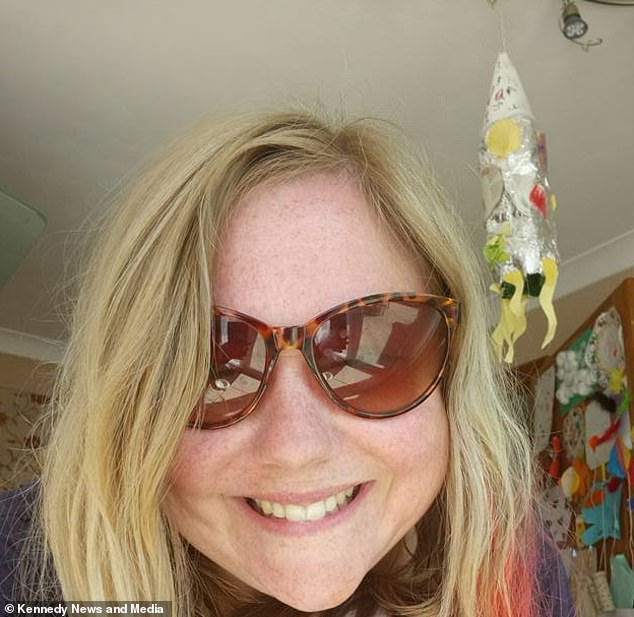 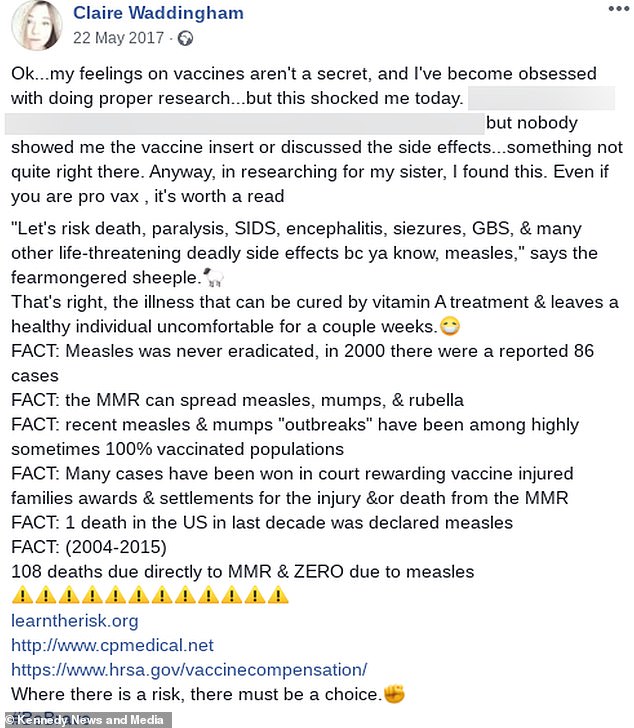 When her opinions garnered criticism, she refused to back down and proclaimed that ‘life comes with risks’.

‘Don’t be cross. If you choose to have your life taken away indefinitely that’s down to you,’ she continued.

‘Still flu kills more. Do you think to self isolate ever year when you get a cold in case you give it to an elderly person who might develop complications? Course you don’t.

‘If people are old and vulnerable, they can choose not to go out.

‘What’s the difference between my six-year-old playing with another child in the garden and all the children of key workers and children in need who have been in school in large groups throughout this entire episode? Actually there’s far less risk.

‘So stay home. Listen to the constant propaganda. Wait for the vaccine shoot-up and think about all your taxes that were spent building hospitals that weren’t needed and let the thinking amongst us get back to it.’

To enforce lockdown, police can instruct people to go home, force parents to prevent their children from breaking the rules and make arrests if necessary.

If they believe someone has broken the law or refused to follow instructions, they can issue a fixed penalty fine of £60, which could increase up to a maximum of £960 for repeat offenders. 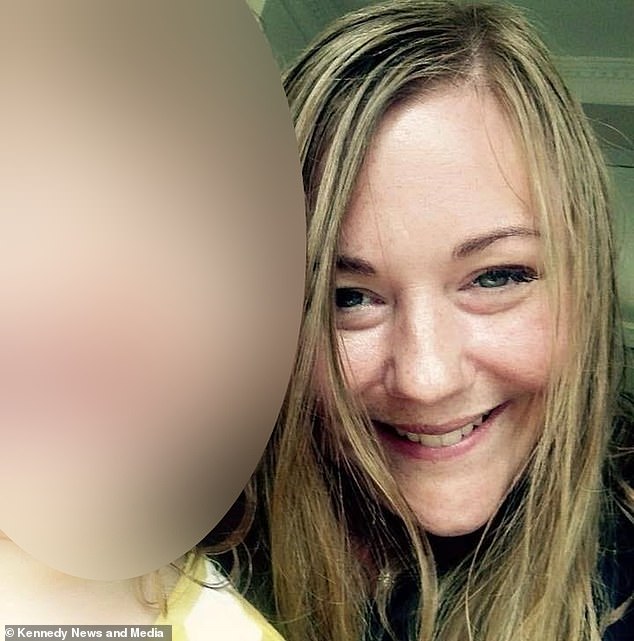 Mrs Waddingham was soon hit with a barrage of criticism from furious fellow parents and social media users who argued inviting friends over would put people at risk.

But she laughed off the responses and then went on to mock the use of public taxes to build the Nightingale Hospital, claiming it ‘wasn’t needed’.

She repeatedly shares anti-vaccination articles and insinuated that 5G is linked to the spread of coronavirus – while Facebook censor some of her posts for ‘false information’.

Lockdown guidelines still state that people should only leave their house for four key reasons – shopping for basic necessities, for example food and medicine, going out for one form of exercise a day alone or with members of their household, any medical need and travelling only where essential.

In response to her revelation, furious readers urged her to think again – with some comparing the act of staying home ‘in comfort’ to the plight of solidiers in the war who were away from family for many months or years.

Gill Jones said: ‘Head in the sand I think. What would you feel if your friend and her child get ill from this terrible virus – which by the way is not just flu. 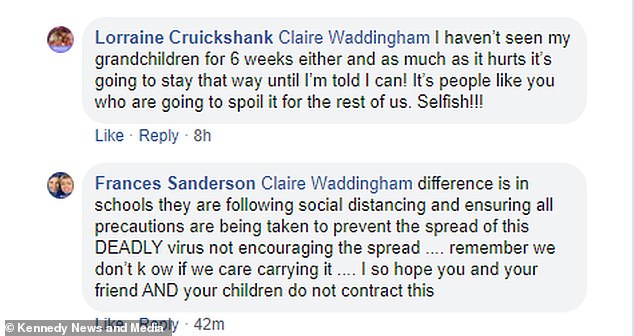 She was branded ‘selfish’, while another user reminded her that the virus can be asymptomatic 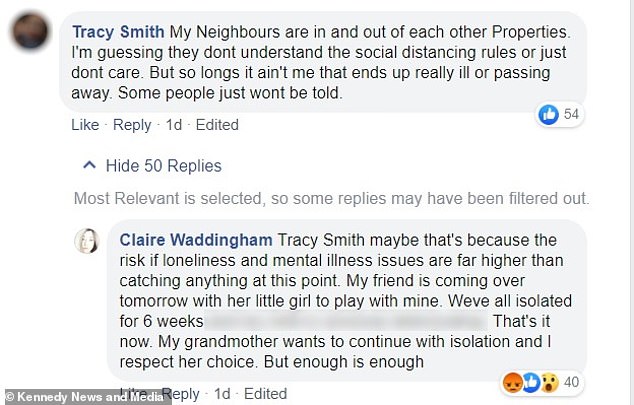 ‘We would all love to meet with our friends and family but we can’t. I would rather stay away from them than end up loosing them.’

Suzanna Wakefield said: ‘You really don’t have a clue do you? My father was in the war when he was 17, away from all his family for months at a time.

‘All we are being asked to do is stay at home for a few weeks in comfort and with video links etc.

‘If people like you carry on doing this sort of thing we could end up in lockdown for longer.

‘But hey, that’s okay you just do as you like, you will do anyway.’

‘Call yourself a thinking person? Seriously?’

Lorraine Cruickshank said: ‘I haven’t seen my grandchildren for six weeks either and as much as it hurts it’s going to stay that way until I’m told I can!

‘It’s people like you who are going to spoil it for the rest of us. Selfish.’

The Metropolitan Police confirmed they were still encouraging the public to follow government restrictions.

A spokesperson from Met Police said: ‘Our policing approach throughout the coronavirus period has always been – in line with national policing – to engage with and speak to members of the public and encourage them to adhere to the current Government restrictions.

‘The vast majority of Londoners have been co-operating positively and are complying with lockdown restrictions. We appreciate the scale of disruption for the public, and their understanding is a crucial part of efforts across the capital, to keep people safe and protect the NHS.’