‘Cowboy builders’ knocked half a million pounds off the value of a family home as their standard of work was so appalling, a court heard.

Company directors Michael Evans and Nicholas Ford were ‘in over their heads’ when they took on the contract to enlarge and refurbish Ian Gage’s house, Reading Crown Court was told.

Today both men, who hired the team of ‘cowboy builders’ to carry out the work on Mr Gage’s home in Newbury, Berkshire, were facing compensation totalling £40,000 and their company was also ordered to pay £9,000 court costs.

Company directors Michael Evans and Nicholas Ford were ‘in over their heads’ when they took on the contract to enlarge and refurbish Ian Gage’s house, Reading Crown Court (pictured) was told

Evans and Ford admitted a charge of engaging in unfair commercial practice. They had denied fraud which was accepted by the prosecution.

‘You Mr Ford and Mr Evans will each pay £20,000 to Mr and Mrs Gage. There will be a collection order in relation to that. Rivar Hill Holdings will pay costs of £9,000 towards these proceedings, within 14 days.’

Building started on Mr and Mrs Gage’s home in September 2016 and by November, after around 10 weeks of work, the house had been torn apart and Mr Gage and his family were left with a home worth a fraction of its cost and an extension which still was not finished, the court heard.

Mr Gage complained to the West Berkshire Trading Standards Authority and officers interviewed Evans and Ford on suspicion of engaging in an unfair commercial practice and fraud.

Prosecuting, Malcolm Gibney said: ‘A contract was entered into with Ian Gage, of Normay Rise, Newbury, for building an extension to his home at an estimate of £55,000.

‘Both directors gave the clearest possible assurances and undertakings that they would project manage the job from start to finish.’

Mr Gibney added: ‘It transpired that was a significant overstatement in terms of the ability and competence of the building team.’

The court heard that after 10 weeks of work the foundations for the extension had been wrongly filled with concrete, making it impossible to finish.

A concrete slab on the ground floor was half the size it should have been and timbers used in the roof were of the wrong type. 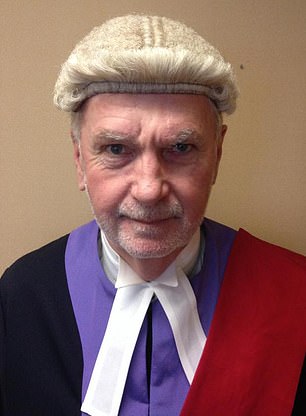 Sentencing, Judge Nigel Daly (pictured) said: ‘I’m not going to make you pay a fine. That would simply go to the Government’

It was revealed that some of the allegations against Ford, 61, Picton Way, Caversham, Reading, and Evans, 50, of Kew Gardens, Shalbourne, Marlborough, were contested but all parties agreed the boiler at Mr Gage’s property was replaced by someone who was not a gas safe engineer, which had cost the victim £1,200 to remedy.

Mr Gibney told Judge Daly that the costs of the work were in excess of £70,000, significantly over the estimate and the cost of remedying the defects and replacing the structures which had been wrongly put in place would be £30,000.

The prosecutor added: ‘No builder is prepared to take on that job given the conditions that have been observed.’

In a family statement, the Mr Gage said: ‘We are left in an impossible situation. We are trapped in a house that we can’t finish or rebuild. If we could sell it, it would be worth a fraction of what we have paid.’

Defending, Laura Phillips argued against a hefty fine for the pair which could lead to the loss of their family homes after Judge Daly pointed out that the equity the defendants had in property could be paid to their victim.

Ms Phillips said: ‘In the case of both of them, that represents their life savings, absolutely everything they have and it is shared with their spouses.’

Ford, wearing a dark suit and green tie, and Evans, with a blue suit and a blue and pink tie, held their heads in their hands as the judge considered their sentence.

Judge Daly told them: ‘What you did was to get in over your heads. Effectively, way above your experience and knowledge which was not intentional but because of you not truly having the proper experience to undertake and assess what was required and what you contracted to do.

‘As a result, Mr and Mrs Gage suffered significant financial loss. It has been suggested that they have lost as much as half a million pounds as a result of the repairs diminishing the value of the house.’

The judge ordered Ford and Evans to pay £20,000 each to Mr Gage and Rivar Hill Holdings, the firm of which they were directors, to pay costs of £9,000 in court costs.