‘Cowboy’ robbed German bank with a toy six-shooter…then fled to the Wild West! Thief says ‘I watched too many westerns’ as he is jailed after being arrested in California

A man who robbed a Munich bank has been jailed in Germany four years after he was arrested in California by US police.

On the 16th of January 2015, Berlin bricklayer Thomas T, 61, walked into the Sparkasse bank in Fah­renzhausen, north of Munich, wearing a cowboy hat, a checked shirt and armed with a toy six-shooter revolver, before proceeding to hold the bank up and escape with 36,800 euros.

On Monday, he was convicted of armed robbery and sentenced to four and a half years in prison in Germany, including time served in California after being extradited from the US.

‘That was an idiotic idea’ said Thomas at the start of his trial as reported by German newspaper Bild, ‘I’ve probably seen too many westerns in my childhood’.

Two weeks after the robbery, Thomas boarded a plane to California, where he settled at Joshua Tree National Park, a location famous for being the set of many a Spaghetti-Western.

‘I took off my hat and grabbed the replica weapon’, he said ‘I’m not proud of it.’

Thomas claims he bought a van, clothes and tools in California from the proceeds of the robbery, and started to live out the rest of his days in his Western fairytale.

But while Thomas enjoyed his new life in California, the net began to close in on him in Bavaria.

Before he robbed the bank, Thomas had run out on paying several bills, and his neighbours recognised him from CCTV footage that had been released by Bavarian police. 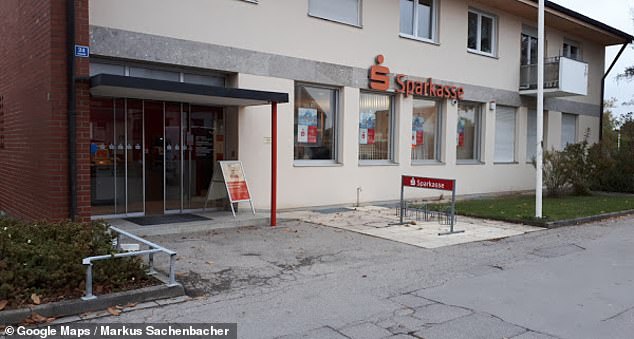 His details were passed to Interpol, and on April 3 of this year, police from the Sen Bernadino district arrested Thomas at a shop in Joshua Tree.

‘I sat in county jail for four months, locked up with 48 men,’ recalled the defendant, who claims he was formerly a Stasi prisoner after attempting to escape the former Soviet-run East Germany.

‘Every night one was beaten,’ he said.

Bild reported that while Thomas had enjoyed his years on the lam, his crime had left a significant impact on the bank staff whom he held at gunpoint.

Bank clerk Christina R, 24, said that when she initially saw him the bank tellers thought that he was in fancy dress.

‘I asked how much he wanted to withdraw,’ she said, ‘then he pulled out his gun.’

It was only after Thomas told her not to press the bank’s silent alarm button that she ‘realised it was not a joke.’

In the courtroom, Thomas T. apologised for the distress he had caused.

‘I did not feel comfortable doing it,’ he said, ‘but I did not think of anything better that day.’

Following his imprisonment, Thomas T said he hopes to move closer to his daughter, who now has a child.