Cows CHAT to each other about food and the weather and can even express emotions, study finds

Cows have their own language and talk to each other about food and the weather, according to a new study by scientists in Australia.

They created a software programme dubbed ‘Google Translate for cows’ to get a better idea of what the heifers were saying when they go ‘moo’.

The study, by a PhD candidate from the University of Sydney, discovered that dairy cows also respond to positive and negative emotional situations.

Cows each have their own individual voice and linked their moods to their ‘moos’, said lead author Alexandra Green.

Biologists made the discovery by listening to Holstein-Fresian heifer cattle, a European breed, mooing into a microphone and analysing the pitch.

Alexandra Green at Mayfarm, Camden. She recorded dozens of cows to capture their pitch and find out how they communicate

Ms Green and her team found each cow retains its own distinct moo and can give cues in different situations which helps them to maintain contact with the herd.

The team found they can also express excitement, arousal, engagement or distress.

The findings could help farmers keep their cattle healthy and happy by understanding each cow’s mood by translating their individual moos.

Some research has already been done into communication between cows.

An earlier study found that cattle mothers and offspring are known to communicate by maintaining individuality in their lowing.

The new study confirms that cows maintain this individual mooing throughout their lives, even when they are nattering among themselves.

Dairy cows communicate with each other all the time, but when they are talking about happier things, like food, their moos are more sonorous, Ms Green said.

When they are moaning about the weather, their moos, while still retaining their fingerprint-like individuality, are pitched lower.

‘Cows are gregarious, social animals’, said Ms Green, who will use this research as part of her PhD dissertation.

‘In one sense it isn’t surprising they assert their individual identity throughout their life and not just during mother-calf imprinting.

‘But this is the first time we have been able to analyse voice to have conclusive evidence of this trait.’ 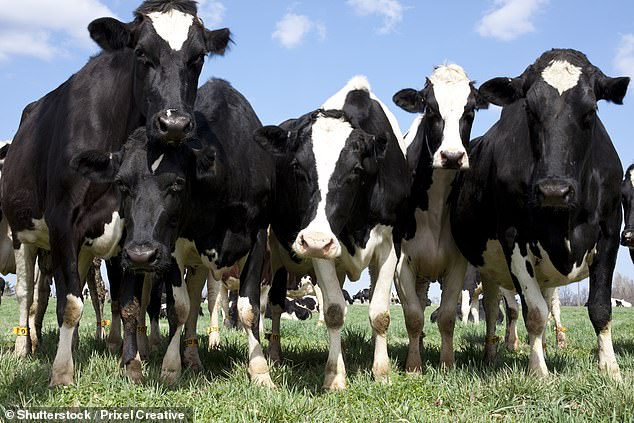 Groups of curious cows coming in for a close-up.  The study, by a PhD candidate from the University of Sydney, discovered that dairy cows also respond to positive and negative emotional situations

In the study, scientists recorded hundreds of ‘moos’ from 13 Holstein-Friesian heifers using acoustic analyses programmes with help from colleagues in Italy and France.

‘We hope that through gaining knowledge of these vocalisations, farmers will be able to tune into the emotional state of their cattle, improving animal welfare.

‘By understanding these vocal characteristics, farmers will be able to recognise individual animals in the herd that might require individual attention.’

The researcher travelled to France to analyse the vocal traits of the cattle in Saint-Etienne, working with leading bioacoustics experts including co-authors Professor David Reby and Dr Livio Favaro.

Her research will be incorporated into her doctorate, which investigates cattle vocal communication and use in welfare assessment on dairy farms.

The researcher, who started the study in 2017 says that one day she hopes to become a ‘cow whisperer’ and create an English to cow dictionary.

The study was published in the journal Nature.

The livestock animals are notorious for creating large amounts of the gas, which is a major contributor to global warming.

Each of the farm animals produces the equivalent of three tonnes of carbon dioxide per year and the amount of the animals is increasing with the growing need to feed a booming population.

Methane is one of the most potent greenhouse gases, trapping 30 times more heat than the same amount of carbon dioxide.

Scientists are investigating how feeding them various diets can make cattle more climate-friendly.

They believe feeding seaweed to dairy cows may help and are also using a herb-rich foodstuff called the Lindhof sample.

Researchers found a cow’s methane emissions were reduced by more than 30 per cent when they ate ocean algae.

In research conducted by the University of California, in August, small amounts of it were mixed into the animals’ feed and sweetened with molasses to disguise the salty taste.

As a result, methane emissions dropped by almost a third.

‘I was extremely surprised when I saw the results,’ said Professor Ermias Kebreab, the animal scientist who led the study.

The team now plans to conduct a further six-month study of a seaweed-infused diet in beef cattle, starting this month.