A bizarre video shows a coyote chasing a car going 25mph down the highway in the middle of Death Valley, California.

The animal was first spotted in the middle of the road doing circles, so the people in the car pulled over to get a closer look.

Once the car was on the side of the road, the coyote walked over to the passenger side and patiently smiled at the occupants.

In a fascinating moment captured on video on Wednesday, one woman in the car recorded the coyote running after the vehicle after they drove off. 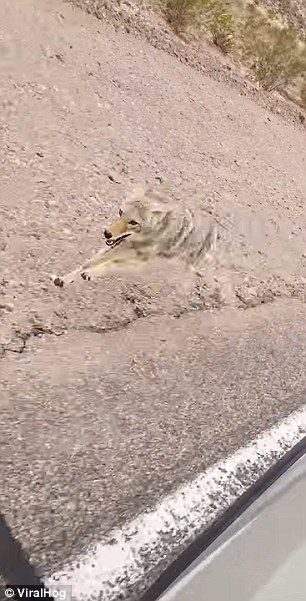 A coyote was caught on film running after a car going 25mph down a highway in Death Valley, California

In the minute-and-a-half long clip, the animal is seen sprinting after the car which is going 25mph down the Death Valley highway.

But the energetic coyote was unable to catch the car, mirroring that of its cartoon twin Wile E. Coyote who can never seem to catch the infamous roadrunner in Looney Tunes.

The woman recording the video at one point asked the driver to go ‘a little slower’ so the coyote could catch up with the car.

She said: ‘He ran after our car going 25mph like a greyhound almost begging us to take him.’

But the passengers were unwilling to take the carnivorous animal along for a ride.

At the end of the video, they leave the coyote behind and drive off down the highway at a faster speed. 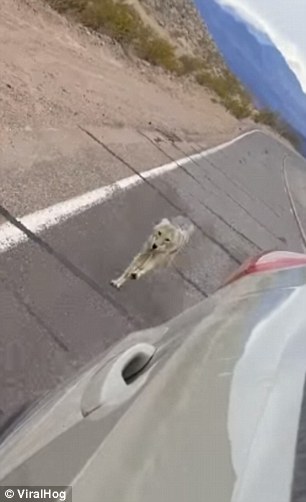 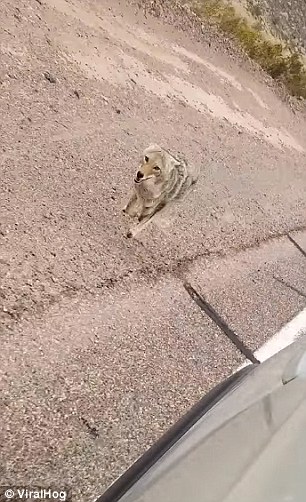 The moment happened on Wednesday as a woman and other unidentified passengers drove down the highway. The coyote ran after the car for more than a minute