After all these years, Andrew Lloyd Webber has now explained why his name always comes before Tim Rice’s in their song-writing credits. The reason, it transpires, is neither alphabetical nor hierarchical.

‘The fact is Lloyd Webber and Rice is easier to say than Rice and Lloyd Webber,’ he told the Mail on Sunday. ‘Just as Sullivan and Gilbert would have sounded awful.’

Is that so? Sullivan and Gilbert may sound a little peculiar to us now, but that is surely because we have grown so used to saying Gilbert and Sullivan.

Lord Andrew Lloyd Webber and Sir Tim Rice (pictured), explain that it would have sounded ‘awful’ if they were referred to as Rice and Lloyd Webber

There’s not much in it, but it seems to me just as easy — or as difficult — to say Rice and Lloyd Webber as it is to say Lloyd Webber and Rice. If one member of a duo is more talented and harder-working than the other, then clearly he or she has earned the right to be first in the pecking order. Was this the real reason Lloyd Webber wanted to be first?

The same must surely have been true of Batman and Robin. When the crime crusaders first got together, it would have been impertinent for weedy little Robin to have insisted on top billing. He was quite clearly the sidekick, the number two, the hanger-on.

Without Batman, Robin would have had no hope of forging a career as a caped crusader, unless it was as some sort of junior store detective in the fancy dress department of the Gotham City Walmart.

So it was quite right that they called themselves Batman and Robin, not Robin and Batman.

The same goes for many other unequal partnerships. There is no point in putting the duff partner first, otherwise we would have Wise and Morecambe, Watson and Holmes, and Joseph and Mary. The weaker partner should always come second, hence David and Goliath and — harsh but true — Barbie and Ken.

But what of those partnerships which operate on a completely equal footing, with no clear superior? It is in the nature of duos to fall out, so the best way of avoiding an early contretemps is to stick to strict alphabetical order.

This is what the most successful and democratic duos have done, or else we would now be talking of Dec and Ant, Dave and Chas, Bowser & Callard, Sweep and Sooty, Jerry & Ben, Jill and Jack, and Spencer & Marks.

When alphabetical order is reversed, sceptics rush to judgment. We immediately assume that the first-named insisted on signalling his or her precedence over the second-named. 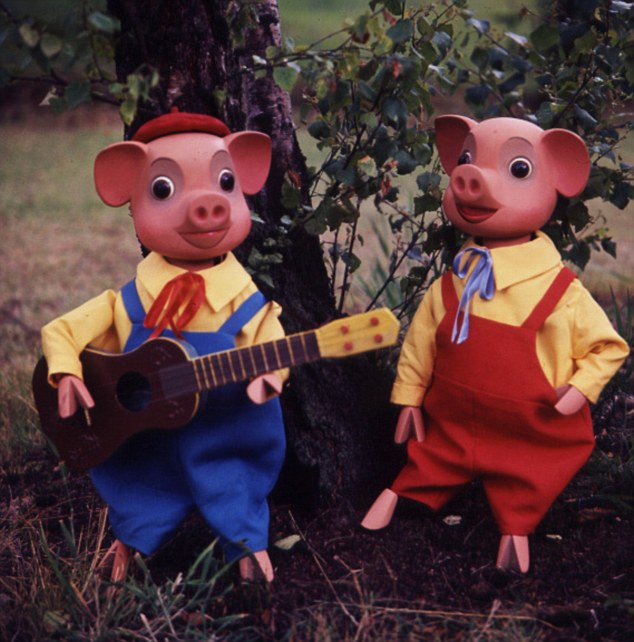 Craig Brown asks why Perky let Pinky go first when their 1956 show was named, and says that in duos where alphabet order is reversed, it’s clear one is more pushy than the other

Personally, I consider Paul Simon perfectly within his rights to force the less talented Art Garfunkel into second place, but it can’t have done much to help their already scratchy relationship. They have been squabbling for the past 60 years or more about everything, even toupees: a recent biography revealed that because Simon wanted to wear a hairpiece at their 1981 gig in New York’s Central Park, he insisted Garfunkel wear one too, in solidarity. Needless to say, an argument ensued.

In some billings, there is a clear gender bias: Hansel precedes Gretel, Samson precedes Delilah, Peters precedes Lee, Terry precedes June. Even though Cher always had much more to offer than Sonny, it was always Sonny and Cher, never Cher and Sonny.

Other billings are more baffling. Within the piggy puppet community, why did Perky let Pinky go first, defying the alphabet, when their stage roles were the same, their genders indeterminate and their skills interchangeable?

Personally, I feel sore on Perky’s behalf. Alas, I have no inside knowledge, but Perky’s downgrading must surely have been down to Pinky’s pushiness, and Perky’s need for a quiet life.

It was Pinky who pulled the strings. The same must also be said of quite a few other duos where alphabetical order is reversed, for no clear reason.

In a fair world, we would have Little & Osborne, Hutch and Starsky, Edgar & Swan, Large and Little, Peller & Rigby, and Ben and Bill. But, then again, when was the world ever fair?