Today show host Craig Melvin began tearing up live on air on Tuesday morning after becoming overwhelmed with emotion while paying tribute to teachers across the country who are doing their best to continue educating children amid the pandemic.

The 40-year-old TV host’s sweet show of emotion came just after host Hoda paid tribute to a Nebraska librarian who launched her own TV show from her basement in order to educate and entertain kids who are in lockdown at home.

While discussing the librarian’s show of kindness with his fellow hosts, Hoda Kotb, Savannah Guthrie, and Al Roker, father-of-two Craig got incredibly choked up, breaking down in tears while opening up about how hard it has been to see his own children forced to be away from their teachers and their friends.

Emotional: Today anchor Craig Melvin began tearing up on the morning show on Tuesday while discussing teachers who are going the extra mile to help kids amid the pandemic 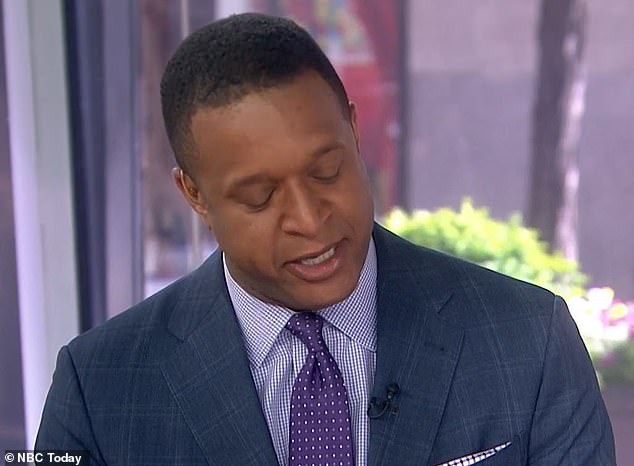 Overcome: The 40-year-old struggled to hold back his tears as he opened up about how ‘hard’ it is for parents and their children, many of whom are homeschooling because of COVID-19 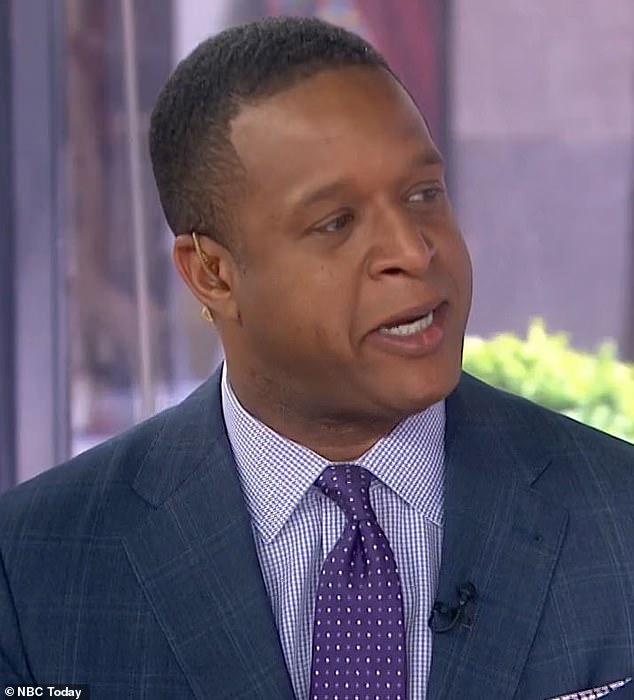 Upsetting: Craig noted how much kids are ‘missing their teachers’ – including his own children

‘As someone who gets to see his kids’ teachers on Zoom, the story is so [moving]… because the kids miss their teachers so much right now, and teachers miss their kids just as much,’ he said through tears.

Craig, who has two children with his wife Lindsay Czarniak, Delano, six, and Sybil, three, continued:  ‘And for us who have small kids, and you’re seeing this every day… it’s just hard, man, it’s hard.

‘So little things like that, just thanks to all the teachers out there who are going the extra mile.’ 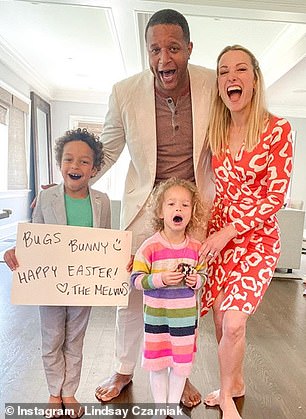 His wife Lindsay has shared similar sentiments on Instagram, while posting images of her life during lockdown – including several snaps of her kids doing their daily lessons.

In late March, she posted a message of thanks to all of her children’s teachers who have helped them to master the art of homeschooling amid the pandemic.

‘I am so appreciative of the teachers in our lives who are sending lessons and plans and videos,’ she wrote in the caption alongside an image of her daughter.

‘The videos have made such a difference because I see my kids faces light up when they see their teacher after missing them during this time.’

On Tuesday morning Today’s show, Hoda quickly showed her support for Craig – who, alongside the mother-of-two, is one of the only hosts who has continued to film from NBC’s New York studio amid the coronavirus pandemic – telling him: ‘I love you Craig Melvin.’

Savannah, who is currently filming from her home, then chimed in: ‘We love you Craig,’ while a slightly bemused Al told his co-host: ‘That’s so good to see. Hang in there buddy!’ 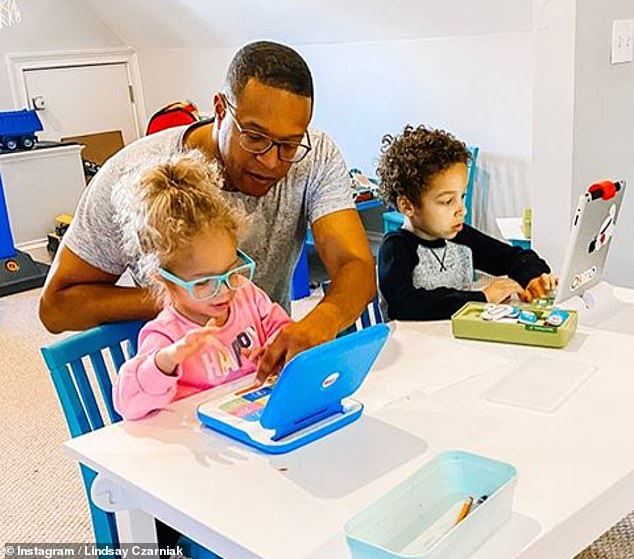 Hard work: He has been helping his children with online schooling during lockdown, and admitted that it has been ‘hard’ for everyone 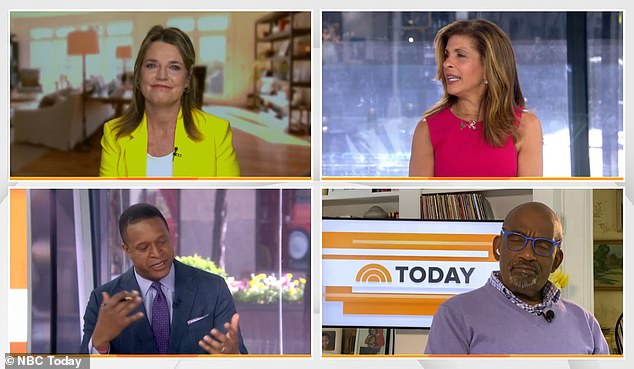 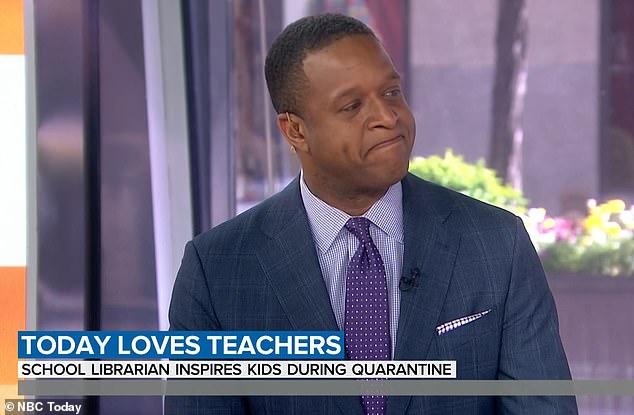 Message: ‘Thanks to all the teachers out there who are going the extra mile,’ he added

48-year-old Savannah shared a few more empathetic words with the father-of-two, admitting that the sweet segment about librarian Mrs. Thomas also made her tear up slightly, too.

‘We’re wrapping our arms around you Craig sweetie pie, and it’s true we all love our teachers so much, and we’re all so tender right now,’ she said.

‘We just love everybody. I’m right there with you Craig, I was tearing up too.’

Indeed, Craig is not the only Today host who has allowed his raw emotions to show through during the morning show’s coronavirus coverage.

In late March, Hoda, 55, broke down in tears during a live broadcast after an emotional interview with NFL star Drew Brees in which she thanked him for his generosity in making a $5 million donation to victims of the coronavirus in Louisiana.

The mother-of-two was overcome with emotion after ending the interview with the New Orleans Saints quarterback, and was left so choked up that she couldn’t continue speaking – leaving co-star Savannah to take over.

Hoda’s heartbreaking display came just seconds after she ended her March 27 interview with Drew, whom she praised for inspiring generosity and kindness in others with his donation. Having told him ‘we love ya’, she then turned to the camera to move on to the next story, but was unable to get the words out before breaking down.

As she struggled to control her sobs, Hoda shuffled papers around her desk and said, ‘I’m sorry’ to the camera, before Savannah, who is currently working from home, jumped in.

‘Oh Hoda, I know, it’s a lot,’ Savannah said, as producers brought her up on screen to give Hoda a minute to control her sobs.

‘Hoda I’m so sorry hun,’ Savannah continued, as Hoda continued to apologize for her show of emotion. ‘It’s a lot. I know where your heart is, I do.’ 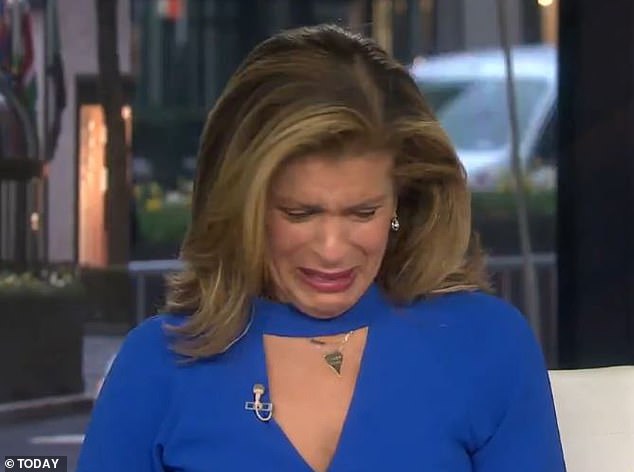 Emotional: In March Hoda broke down in tears live on the Today show after interviewing NFL star Drew Brees about a $5 million donation he made to Louisiana’s coronavirus victims 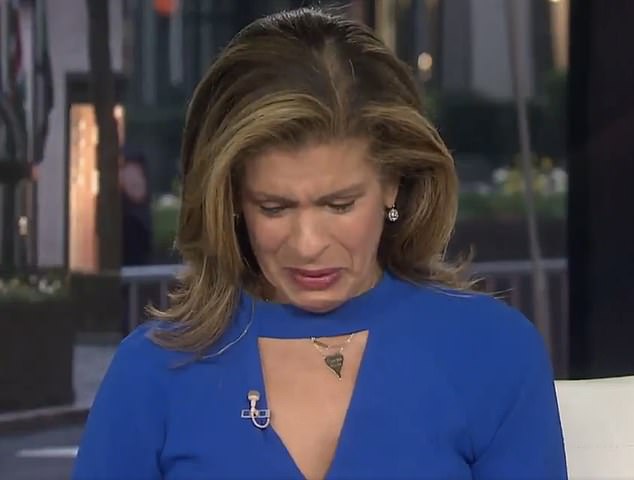 Heartbreaking: After ending the interview, in which she praised Drew for his generosity, the mother-of-two was overcome with emotion and left unable to continue speaking 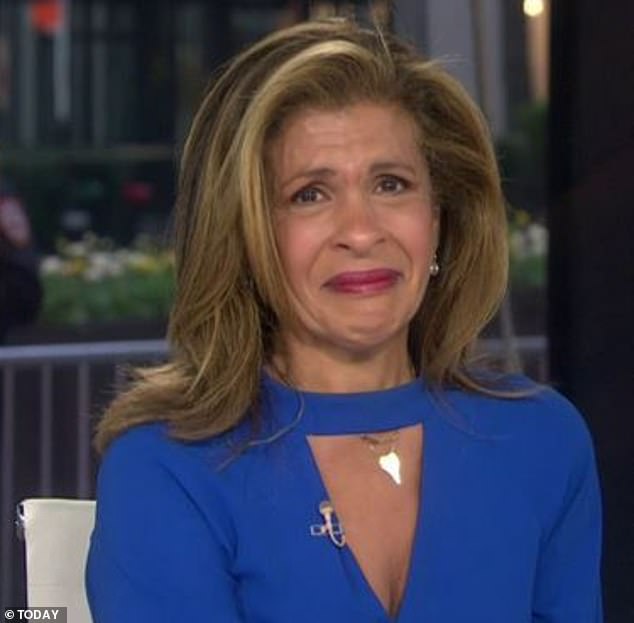 Overcome: Hoda shuffled papers around on her desk as she tried to get her sobs under control, before Savannah jumped in to take over from her colleague

The mother-of-two then offered to take over reading the ‘tease’ for the next part of the show, to which Hoda replied, ‘Yes please,’ as she looked down at the desk and tried to catch her breath.

Hoda’s show of emotion came just moments after the end of her interview with Drew, 41, during which they discussed the donation made by the football player, and the devastating effect that the coronavirus has had on New Orleans – a city that Hoda has a long-standing personal connection to.

Having been born in Oklahoma, the Today anchor spent much of the 90s living in New Orleans, where she worked as an anchor for CBS affiliate WWL from 1992 to 1998.

Hoda often talks about how she fell in love with the city during that time, and she has long been a very dedicated supporter of Drew’s team, the New Orleans Saints – something that she has happily shared with her adopted daughters, Haley Joy, three, and 11-month-old Hope Catherine, as well as her fiance Joel Schiffman.

In his tear-jerking interview with Hoda, Drew, who was born in Texas, but has played for the New Orleans Saints since 2006, admitted that ‘this is a devastating thing for a lot of people but especially for the state of Louisiana’.

He added: ‘We have to come together and help one another.’

Hoda’s on-air tears struck a chord with hundreds of viewers, many of whom tweeted words of support, love, and even appreciation for the hard-working anchor, after a clip of her crying was shared on the Today Twitter account.

‘I love that Hoda showed her emotions!’ one person wrote. ‘There is only so much people can take reporting this day after day. She cried for all of us.’

Another wrote: ‘Thanks for showing your humanity love and hope. Love you Hoda!’

‘It’s comforting to see others feeling just how I’m feeling,’ one Twitter user said. ‘Random tears at random moments. Thank you for being real, @hodakotb! I know @savannahguthrie just wanted to give you a hug and so did I!’