A crane on its way to remove a statue of Confederate General Robert E Lee in Dallas was involved in a car accident that killed one person, police say.

The crane collided with a semi-truck around 8.20pm on Sunday, just seven miles from the statue in Robert E Lee Park.

The semi-truck driver was pronounced dead at the scene, while the crane driver did not suffer any serious injuries.

A crane on its way to remove a statue of Confederate General Robert E Lee (pictured) from Lee Park in Dallas collided with a semi-truck on Sunday, killing the truck driver

The crash occurred after the crane turned westbound on a green left-turn arrow. The semi-truck driver had run through a light as he or she drove south on the freeway and collided with the crane, CBS DFW reported.

A statement from the city said that the semi-truck driver ‘was travelling … at a very high rate of speed and failed to yield the right of way, colliding into the crane’.

Police are continuing to investigate the crash, and it is unclear how the incident will affect the time frame of the statue removal.

A judge had ruled on Thursday that the statue would be removed, despite the Sons of Confederate Veterans filing a restraining order to halt the removal process.

Court documents show US District Judge Sidney Fitzwater ruled Thursday that Dallas resident Hiram Patterson and the Sons of Confederate Veterans had not proven that the removal violated their free-speech rights or that the city had not provided due process in approving its removal. 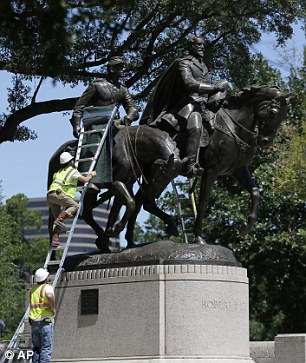 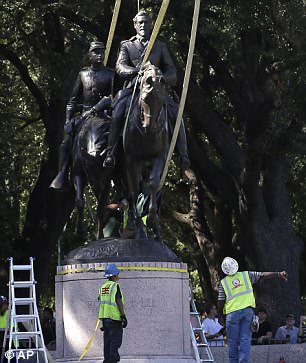 Police are continuing to investigate the crash, and it is unclear how the incident will affect the time frame of the statue removal. A judge had ruled on Thursday that the statue would be removed, despite the Sons of Confederate Veterans filing a restraining order to halt the removal process

A harness had been placed around the statue, when Patterson requested a temporary restraining order and a chance to argue his case against removal.

The removal had been scheduled for Friday, but had to be delayed to Sunday due to Dallas not having necessary removal equipment.

The crane that had been scheduled to remove the statue on Sunday night had arrived in the city from Houston less than an hour before the crash.

A removal resolution – which also told the Mayor’s Task Force to look for other statues and streets dedicated to Confederate figures – was approved in the city in a 13-1 vote after a proposal by four black council members.

The resolution said that further action may be taken against the other Confederate monuments in the city in November.

Before the resolution was passed, the Lee Park and the Arlington Hall Conservancy said it supported removing the Robert E Lee statue. 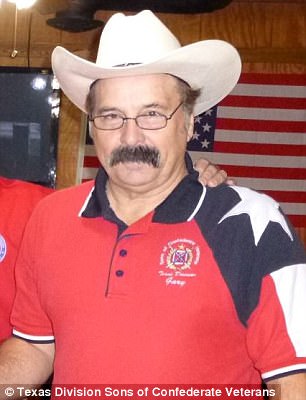 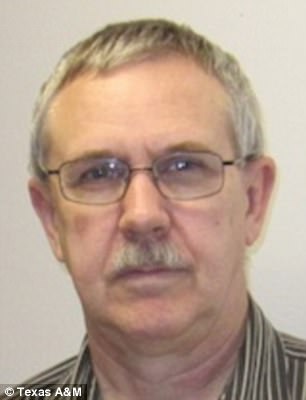 Delivered: Sons of Confederate Veterans member Gary Bray (left) delivered the court order to police at the statue. The suit was filed by Hiram Patterson (right)

It noted that the statue was owned by the city, not the conservancy, and said it would ‘address’ the space left by the statue at a later date.

It also said it hoped to rename itself sooner rather than later.

‘We are hoping that process can be expedited, and the Council will simply return the park’s moniker to Oak Lawn Park which was the original designation of the property when the park was established in the early 1900s,’ it said.

The move comes amid mounting pressure around the country to remove statues to Confederate soldiers in the wake of the violence seen in Charlottesville, Virginia last month.

That saw one die and dozens injured in clashes between white supremacists protesting the removal of a Lee statue and counter-protesters.

Since then a number of statues have been damaged, including one of Robert E Lee at Duke University’s Duke Chapel in Durham, North Carolina, on August 19 which was subsequently removed.