The mystery behind how a spoof Presidential seal was used as a backdrop for a Donald Trump speech deepened today as the artist behind the Russian-themed design told DailyMail.com there was ‘no chance’ it was an accident.

But its creator, Charles Leazott, said it was impossible for someone to have innocently stumbled across his satirical version of the US seal because the website where he displays and sells art had been offline for the past two years.

Leazott, a 46-year-old graphic designer from Richmond, Virginia, told DailyMail.com he had no part in the bizarre turn of events that saw the doctored image beamed on stage in Washington DC Tuesday as Trump spoke.

But he added, gleefully: ‘I have zero clue who did it. Although, if I ever find out, I will absolutely buy them a beer. That’s awesome.’

President Donald Trump spoke to Turning Point USA’s Teen Student Action Summit on Tuesday, taking the stage while a doctored parody of the Seal of the President of the United States flashed on a video screen behind him 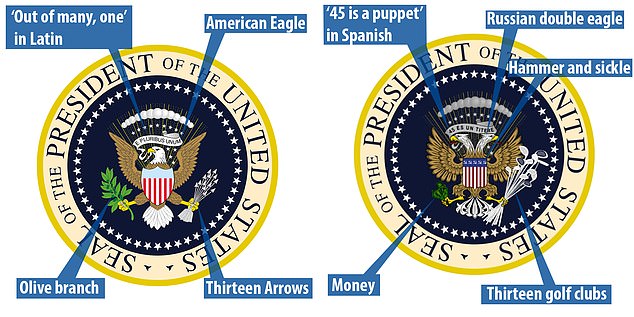 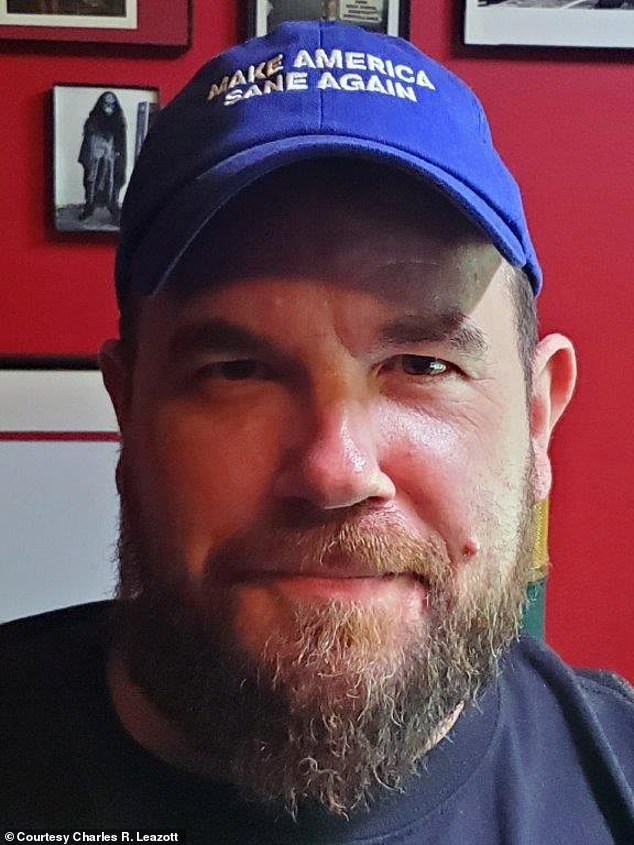 Charles R. Leazott, Creative Director of Quirk Media Group, is the artist behind the doctored Presidential Seal which appeared behind President Trump. The satirical seal shows a two-headed eagle clutching cash and a clawful of golf clubs

Leazott, a married father of two who has voted both Republican and Democrat in the past, said he came up with the design back in 2016 after Trump won the election to tease his love of golf and supposed ties to the Kremlin.

Instead of ‘E pluribus unum’, the U.S. motto that means ‘out of many, one’ in Latin, the satirical version of the presidential seal – seen by roughly 1,000 teens and a global online audience – sported a new phrase: ’45 es un titere.’

That’s Spanish for ’45 is a puppet.’ And in place of the bald eagle seen on the official version, unchanged since 1960, was a two-headed eagle from the Russian coat of arms, complete with hammer and sickle across its chest and a bag of golf clubs in its claw.

When the design proved a hit with his friends, Leazott added it to a website he created to sell anti-Trump memorabilia, entitled ‘Onetimedonnie: Dedicated to the cause of ensuring Donald Trump serves no more than one term as the President of the United States.’ 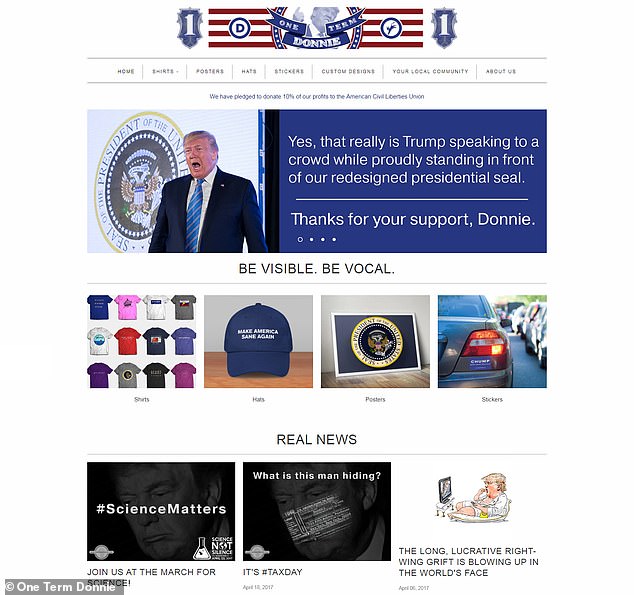 The homepage of Leazott’s website is seen above. Since the story broke Thursday Leazott said he had put his shop back online to cash in on interest in the spoof seal 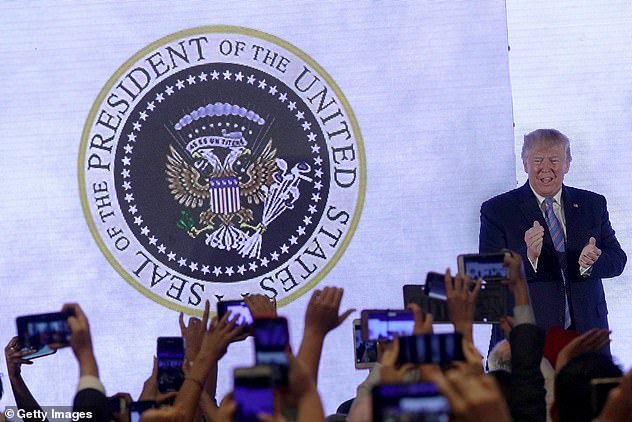 The phony seal was on display for 1,000 young people and a gigantic online audience – none of whom noticed the gaffe until nearly 48 hours later

But by the start of 2017, however, he says he stopped maintaining the website and the shop was offline, so if anyone clicked on the domain name all they would see was an empty blog page.

Leazott’s alterations somehow went unnoticed this week as Trump took to the stage and addressed the hundreds of young supporters packed inside the Marriott Marquis in Washington, D.C.

However it was soon spotted in the dozens of photos and videos from the event, prompting Turning Point USA chiefs to apologies and insist it was a simple oversight.

‘My website would technically have existed but it wouldn’t have taken you anywhere and the art wasn’t on there,’ he said. ‘You have to remember I’m just a random nobody and why would I come up in the search results. There’s a million funny Trump images on google and this is just one more of them.

‘You would have had to specifically go seeking this out. So I just don’t buy for an minute that this was just an innocent mistake.

‘Somebody did this on purpose – I think it’s hilarious.’

Neither the White House nor Turning Point USA initially had an explanation for how the modified seal ended up in photos alongside the leader of the free world.

But by Thursday afternoon the responsible person had gotten his walking papers. A source at Turning Point described the unlucky ex-employee as ‘a low level audio-visual grunt’.

The source had said earlier that the organization was ‘chasing down an explanation’ for what it saw as an ’embarrassing’ moment for a group the White House considers a key ally heading into the 2020 election season.

Turning Point USA also told CNN that it had ‘zero malicious intent’ behind the imagery.

‘We’re sorry for the mix-up and meant no disrespect to the White House or the President or the advance team,’ the group said. 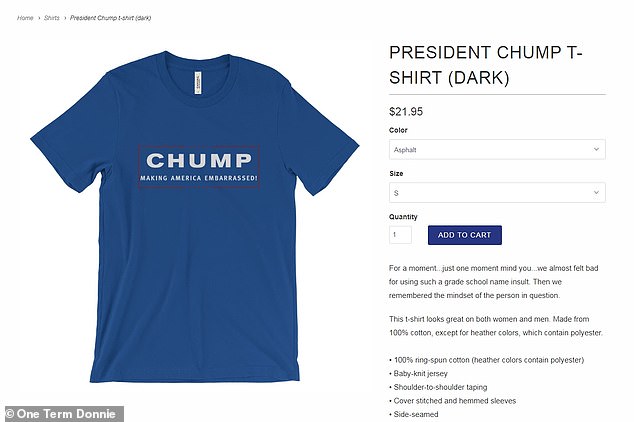 Leazott’s store is now back online to cash in on interest in the spoof seal. One of the T-shirts for sale is seen above 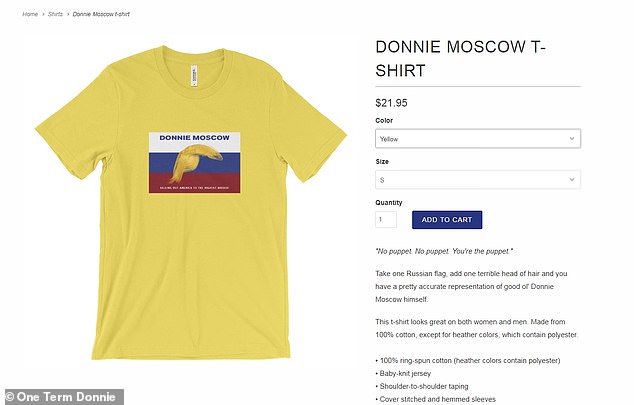 ‘I have sold a ludicrous amount of merchandise today,’ he laughed. ‘Shirts, stickers, basically anything you can print it on.’ Another T-shirt available on the site is pictured above 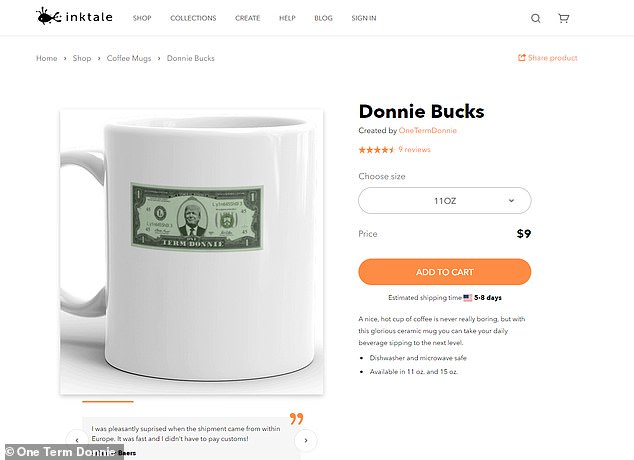 The store also sells mugs. A White House aide brushed off a suggestion on Thursday that the president’s advance team should have inspected all the visual elements of the stage presentation before Trump arrived

A White House aide brushed off a suggestion on Thursday that the president’s advance team should have inspected all the visual elements of the stage presentation before Trump arrived.

‘This is a Turning Point thing,’ the aide said. ‘Go ask them.’

Since the story broke Thursday Leazott said he had put his shop back online to cash in on interest in the spoof seal, with spectacular results.

‘I have sold a ludicrous amount of merchandise today,’ he laughed. ‘Shirts, stickers, basically anything you can print it on.’

You can visit his store at One Term Donnie.