Boris Johnson ousted by his fellow Tories, an economy in free fall, the lingering effects of the pandemic and a Russian state attempting to hack our computer systems.

New drama The Undeclared War feels so prescient that Ian Katz, Channel 4’s Chief Content Officer, was worried before he put out a trailer that features a fictional news bulletin as ‘people might think it was real’.

The chilling events in this six-part international cyberwar thriller could very easily happen, insists its creator Peter Kosminsky, and when you know that, watching civilisation quickly unravel is utterly terrifying. ‘The Undeclared War is a cautionary tale,’ says Peter, the man behind the TV adaptation of Wolf Hall and ISIS drama The State, who spent five years creating the series.

‘There is nothing in this show that either hasn’t happened or is not being wargamed by the people here and in other countries who are trying to prepare for these things. There are no techniques shown or strategies described that aren’t happening.’

On the day she starts, catastrophe strikes. A highly sophisticated bug infiltrates GCHQ’s systems just as it’s testing the strength of Britain’s communications. Soon the entire internet – bizarrely excluding social media – is down.

Saara, an outsider in a largely white, male organisation, is applauded at first when she spots something the other coders have missed, but very quickly it emerges that the team, led by Danny Patrick (Simon Pegg) and John Yeabsley (Mark Rylance), a GCHQ old hand who is brought back into the fold to support his former colleagues, are facing a threat much bigger than they could have imagined.

As planes are grounded, hospitals are engulfed in chaos, supermarkets run out of stock and communications black out, GCHQ is instructed to fight back and a tit-for-tat war begins. The series was born out of a dinner conversation Peter had with the show’s producer Colin Callender in the wake of the 2016 US election, when it was rumoured that Russia had influenced voters via the internet.

‘I realised there was something going on and I felt it was my job to cast some light on it,’ says Peter, who spoke to leading cyber intelligence officials to learn more about the preparations being made for this sort of invisible war.

‘The more I researched, the more I was shocked by the fragility of our internet-dependent society. It’s really serious, and if we’re not careful, this sort of war will escalate to the point where it threatens our civilisation.’

It’s a show about a war between computer programmers, but it’s terrifyingly tense. Though coding isn’t the sexiest of jobs, the drama portrays Saara metaphorically as a sort of action hero, using hammers, scalpels and crowbars, which are all coding terms, to crash through doors and plunge down manholes in search of the tiniest clues in her battle with the enemy.

‘It’s hard to represent coding so we use this surreal landscape which is a manifestation of what’s going on in her mind,’ says Hannah. ‘Before I started the job, I taught myself two programming languages. 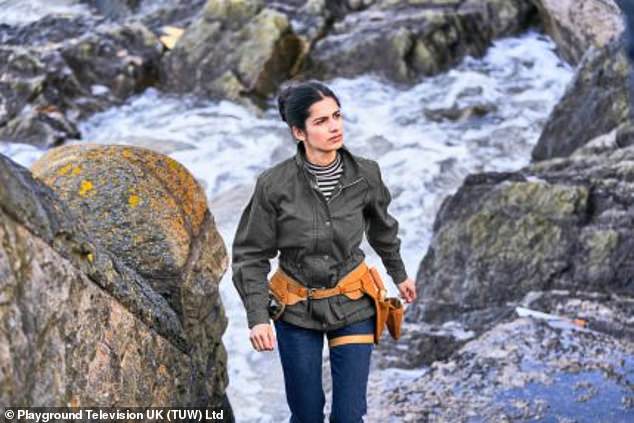 The story centres on Saara Parvin (Hannah Khalique-Brown), a young student who’s doing work experience at GCHQ and joins the intelligence centre’s department fighting cyber threats. On the day she starts, a cyber attack occurs and she has to help the team solve it

‘There’s a moment where the penny drops, and from that I could understand what Saara is doing. She’s using every tool available. She’s a very talented coder who thinks differently to everyone around her.’

Meticulous research went into the drama to make it authentic. The coding – which to most of us just looks like a jumble of numbers and letters – was written by global cyber security experts at the NCC Group.

‘I worked with the NCC for five years on this,’ says Peter. ‘Every piece of code you see has been written with its particular function in mind. Some of it is malicious software, which has been adjusted so that it can’t be copied and used.’

Peter gave each of his actors reams of notes about their character’s backgrounds. ‘I was flattered to be sent the script as it’s not the kind of role people assume I’m interested in,’ says Simon Pegg, better known for comedy roles and the Mission: Impossible films.

‘I was gripped by the story and Peter is exhaustive when it comes to building his characters. ‘So I knew all about Danny’s family, the fact that he was adopted and lived in foster homes and that he was a big rugby player, which is why I chose to make his stress ball a rugby ball.

‘I’m a big believer that acting is just pretending – like we do as kids. But this felt like something different for me. It wasn’t just the quality but also the significance – it feels like an important piece of television.’

The Undeclared War starts on Thursday at 9pm on Channel 4.