Credit card approvals will fall and interest-free terms will shrink

Banks will increasingly tighten lending criteria over the next three months, approvals for credit cards and loans will fall and interest-free term lengths will shrink, banking giants and building societies predict.

The Bank of England’s latest credit conditions survey revealed lenders by a large margin believe the availability of unsecured credit for households will decrease between April and June, as the economy is battered by the coronavirus outbreak.

While banks said that the availability of unsecured debt like credit cards and personal loans slightly increased in the first three months of this year, the survey suggests this will reverse due to the economic impact of the virus and lenders’ reduced appetite for risk.

Banks are increasingly unlikely to want to hand out unsecured debt to households when there are doubts as to whether they will be able to pay it back in the future.

Lenders are also being required by the Financial Conduct Authority to offer payment holidays to credit card and loan customers and spend more time supporting existing customers who may be struggling.

The survey results are weighted according to banks’ responses and their share of the market and are delivered as net percentages between minus and positive 100.

Positive balances suggest banks expect the availability and demand for credit to increase over a three-month period.

A net balance of 26 per cent of lenders believe the availability of unsecured credit will decrease in the second quarter of 2020.

This is the second bleakest prediction since the midst of the financial crisis in 2008, beaten only by the third quarter of 2017, and if the prediction came true would be the biggest reduction in availability since the first three months of 2018.

Then, a net 38 per cent of lenders recorded a shrink in the availability of unsecured credit, a period which coincided with the beginning of an FCA crackdown on credit card debt and a Bank of England inquiry into how much Britons were borrowing.

The last three months of 2017 also saw a rise in the Bank of England base rate from 0.25 per cent to 0.5 per cent, with suggestions it could rise further increasing the cost of debt, and economic uncertainty thanks to Brexit.

This negative prediction also marks a big swing from the first three months of this year, when a net 5.5 per cent of lenders recorded an increase in the availability of unsecured credit.

More pressingly for households, close to 33 per cent of banks and building societies expect to tighten lending criteria for credit cards and loans and more than 35 per cent expect approvals to drop.

Andrew Hagger, the founder of personal finance site Moneycomms, previously told This is Money: ‘The appetite from lenders to take on fresh unsecured debt will wane as unemployment soars and the economy weakens.

‘Restricting new 0 per cent lending by tightening lending criteria and/or reducing the competitiveness of products wouldn’t surprise me.’

Comparison site Compare the Market told This is Money they had seen examples of lenders already tightening eligibility criteria for new customers, meaning they were less likely to be accepted for applications.

Meanwhile banks also expect interest-free terms for both balance transfers and purchases to shrink over the next few months. 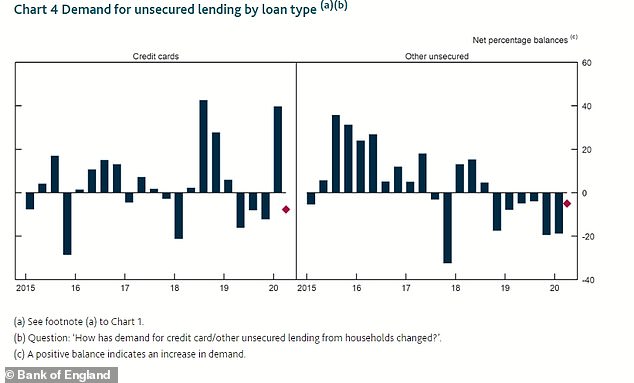 Banks also believe demand for new credit would shrink, likely as consumers cut down on spending

Tesco Bank said it had taken the decision to reduce some of its credit card offers in order to focus on existing customers and reduce the number of new customers.

However, this is something of a continuation of a recent trend, as only once since the end of 2017 have banks predicted the length of interest-free terms to increase, while interest-free balance transfer terms have shrunk from 43 months to 30 over the last three years.

There is no doubt these are worrying signs for households who may be looking to keep a lid on the cost of their debts over the next few months.

But although some may expect more households to turn to credit cards, overdrafts, loans and other borrowing if their finances come under strain in the next few months, a net 7.2 per cent of lenders expect there to be less demand from households for unsecured debt.

This is a reversal from the first three months of this year, with close to 31 per cent of banks finding more credit being taken out by households between January and March.

This might be because consumer spending is expected to shrink, especially on things like travel and non-essential items.

Recent figures from Barclaycard, which sees nearly half of the nation’s credit and debit card transactions, found consumer spending fell 6 per cent year-on-year in March and spending on non-essentials fell 12.9 per cent.

British households had £71.9billion outstanding on credit cards at the end of February and owed another £153.2billion in other loans, according to the latest figures from the Bank of England.

TSB has launched a balance transfer offer with a 30 month interest-free term, temporarily reversing the shrinking of deals which has been seen over the last few years.

It comes with a 2.95 per cent fee and three months interest-free on purchases too, with a representative APR of 19.9 per cent. Those with lower credit scores could end up with a lower interest-free term of 24 or 27 months.

Meanwhile, three cards offer 0 per cent on purchases for 26 months. One of those is Sainsbury’s, now only available to existing customers.

Its representative APR is 20.9 per cent and it also comes with a 26-month interest-free term on balance transfers, with a fee of 3 per cent.

It has a representative APR of 21.7 per cent.