But households also increased repayments, meaning total debt on cards increased by £440million in July, down from £506million.

The Bank of England has reported the British households spent a record £16.6billion on credit cards last month

The total amount owed on credit cards hit a fresh record high of £68.7billion, according to the latest figures from the Bank of England.

The annual rate of growth for consumer borrowing slowed to 9.8 per cent, the lowest rate of expansion since April 2016.

This was down slightly from 10 per cent to June, but still means that Britons are racking up debt at almost five times the growth rate of wages.

Economists said the slight slowdown in borrowing reflects the recent lull in spending as households have been squeezed by inflation.

But it means households are still borrowing at levels not seen since the financial crisis.

The rise in spending on credit cards is likely to have been driven in part by the boom in contactless payments. 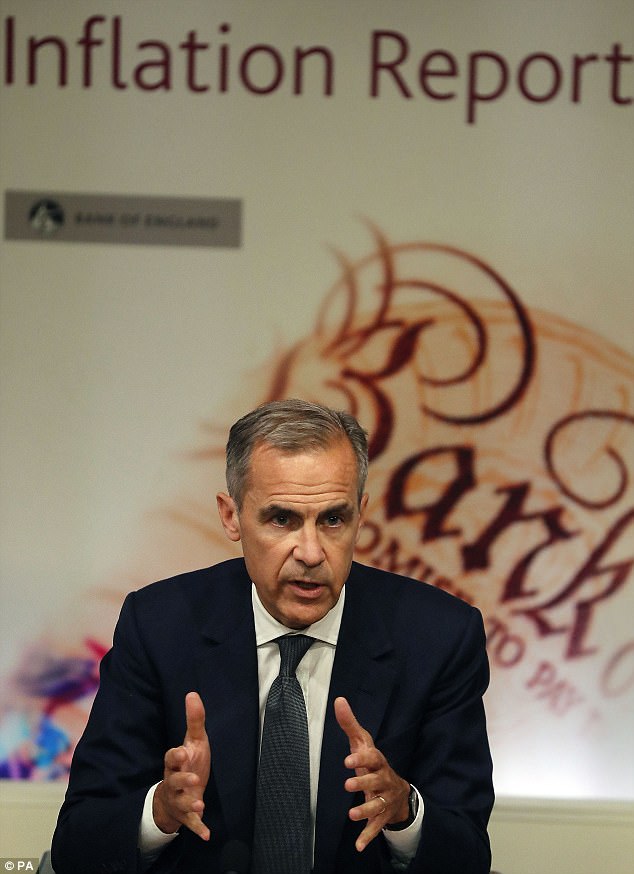 Mark Carney, governor of the Bank of England, which has reported a record-breaking month for credit car expenditure across Britain

This ‘tap and go’ technology is encouraging shoppers to use debit and credit cards rather than cash for small everyday purchases.

Peter Tutton, Head of Policy at StepChange Debt Charity, said: ‘With stagnant wages and rising inflation squeezing household incomes further, a slight decrease in the rate of growth for consumer credit is no sign of relief. These latest figures show overall consumer credit is rising by nearly 10 per cent annually and with people now getting into debt at a younger age and an estimated 8.8 million turning to credit to meet essential living costs, we must remain vigilant that a credit bubble is not history repeating.’

The Bank of England and the Financial Conduct Authority have becoming increasingly concerned that household borrowing has reached dangerous levels.

Lenders have been ordered to behave more responsibly after being criticised for enticing customers into taking on debts they cannot afford.

But economists said the slight slowdown in borrowing was driven by wider economic conditions – namely the slowdown consumer spending – rather than pressure exerted on lenders.

Official figures released last week revealed the squeeze on households, with consumer spending growing by 0.1 per cent in the second quarter, down from 0.4 per cent for the first three months of the year.

Spending has been impacted by rising inflation as the Brexit vote has hit the value of the pound, pushing up the cost of imported goods.